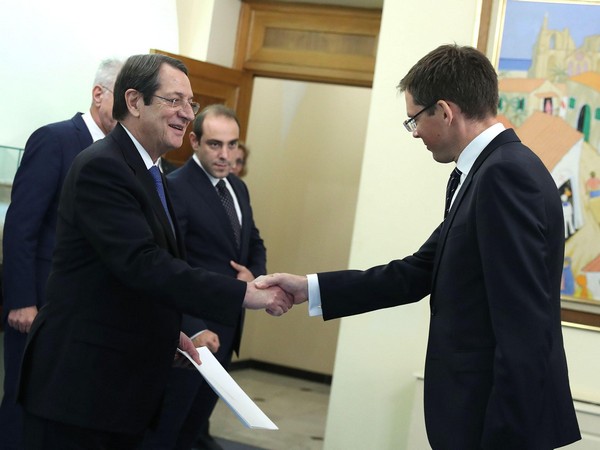 The President of the Republic, Mr Nicos Anastasiades, received the credentials of the Ambassador of Norway, Mr Frode Overland Andersen, during a formal ceremony held at the Presidential Palace on Friday, November 8, 2019.

I have the honour to present the Letter of Credence in which His Majesty King Harald V appoints me Ambassador Extraordinary and Plenipotentiary of the Kingdom of Norway to the Republic of Cyprus as well as the Letters of Recall of my predecessor.

Let me assure Your Excellency of my Government´s continuing support for the sovereignty, independence and territorial integrity of the Republic of Cyprus. Norway sincerely hopes that it will be possible to find a solution that will reunite the two communities in Cyprus.

A settlement should not be imposed by somebody else from outside but has to be the product of a genuine agreement between both sides on Cyprus. We hope that you will succeed in finding a framework that would make it possible to restart the talks that ended in Crans Montana in 2017.

Norway will continue to provide support to Cyprus both politically and economically. Inter alia we have funded peace and reconciliation efforts in Cyprus through the International Peace Research institute in Oslo (PRIO). We will continue to do so for the time to come.

Norwegian contributions through the EEA-grant agreement has opened up new possibilities for strengthening our bilateral relations. In March 2019 Norway, together with our EEA partners Lichtenstein and Iceland, signed a new cooperation agreement for the coming period up to 2021. Combined with our own bilateral Norway Grants the total amount available is Euro 11,5 million.

As agreed with Your Government the aim of the funds are to strengthen the civil society, facilitate bi-communal cooperation, improve health care and social services and to reduce the vulnerability to climate change.

With the gracious goodwill of Your Excellency and friendly assistance of the Government of Cyprus, I am confident that a successful accomplishment of my mission will be assured and that the relations between our two nations will be strengthened and further developed.

I can assure you, Mr. President, that I will do my utmost to broaden our relationship during my duty as Ambassador to the Republic of Cyprus.

I now beg leave to hand you the Letters of credence from my Sovereign.

It is with distinct pleasure and sincere feelings of friendship that I receive today your Letters of Credence appointing you as the new Ambassador of the Kingdom of Norway to the Republic of Cyprus. I would like to assure you that my Government will provide you with every assistance in the performance of your high duties.

On the basis of our common principles and values, our two countries enjoy excellent bilateral relations, as well as close cooperation in international fora. I avail myself of this opportunity to express my readiness to further enhance our relations and explore new fields of mutually beneficial partnership in various areas such as merchant shipping, energy and tourism. In particular, we would be interested in expanding our cooperation in the field of hydrocarbon resources, since the Kingdom of Norway has valuable expertise in the technical field and the sustainable management of the wealth created by natural resources.

It would also be an omission not to recognize the significant role and contribution of Norway in peace-building, mediation and humanitarian issues. In this respect, I would like to express my appreciation for Norway’s contribution to the EEA and Norway Grants, more specifically for the several ongoing projects in Cyprus which mainly have a strong bi-communal character.

Cyprus highly values Norway’s consistent support towards our efforts to reach a comprehensive and viable settlement on the Cyprus problem, on the basis of international law and the relevant United Nations resolutions on Cyprus. We will continue to rely on your invaluable support and solidarity in this regard based on Norway’s long-standing commitment to promoting peace and upholding the principles of the United Nations around the world.

A support which becomes even more important amidst a period of continued violations by Turkey, such as the illegal drilling operations within Cyprus’ Exclusive Economic Zone, as well as actions and statements alluding to plans of the Turkish side for a potential opening of Varosha. The aforesaid actions do not only contradict the UN Charter and international law, but they also pose a threat to peace and stability in Cyprus and our immediate region and run contrary to the necessity of having a positive climate in place, conducive to resuming negotiations.

On my own behalf, I wish to assure you, of my unwavering commitment to the peace process under the United Nations Good Offices Mission and to continuing the negotiations on the six-point framework the UN Secretary-General has set as the basis for the way forward. I take this opportunity to reiterate my strong will and determination for a positive conclusion of the tripartite meeting with the UN Secretary-General and the Turkish Cypriot leader on November 25, 2019, in Berlin.

The reunification of Cyprus and its people after 45 years of Turkish occupation is long overdue. In the face of this perpetuated injustice, the aim of reaching a lasting and comprehensive settlement, which would safeguard the sovereign, independence and territorial integrity of the Republic of Cyprus, without any third country dependencies, military troops and guarantees, cannot wane.

Despite Turkey’s continued illegal actions in Cyprus’ maritime zones, I remain strongly committed and determined to do my utmost to support the efforts of the UN Secretary-General to create the necessary conditions in order for the talks to resume.

At the same time, we do hope that our Turkish Cypriot compatriots will fully abide to the relevant UN Security Council Resolutions which call for the return and resettlement of Varosha by its rightful and lawful owners and inhabitants and abandon their actions or any plans which are in clear violation of the 1979 High-Level Agreement between the leaders of the two communities and the UN Security Council Resolutions 414 (1977), 442 (1980), 550 (1984) and 789 (1992).

In welcoming you to Cyprus, I would kindly request that you convey to the King of Norway, His Majesty Harald V, as well as the Prime Minister Mrs. Erna Solberg, and to the amicable people of the Kingdom of Norway our warmest greetings and a message of friendship and solidarity.

I conclude by extending my heartfelt wishes and by assuring you once more of my Government’s support to your valuable mission, so that your tenure will be highly constructive and carried out in such a way that the sound relationship that Cyprus enjoys with the Kingdom of Norway will further flourish».

Televised message by the President of the Republic, Mr. Nicos Anastasiades on the 1st day of implementing the 2nd stage of GESY