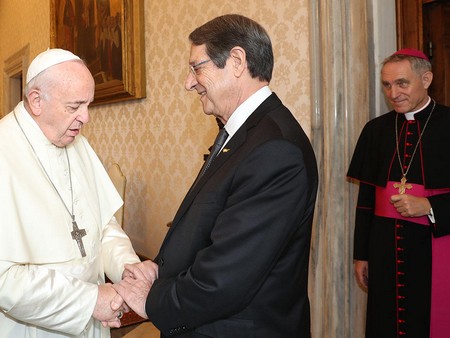 An invitation to Pope Francis to visit Cyprus, extended today by the President of the Republic Mr. Nicos Anastasiades who paid an official visit to the Holy See, was accepted by the Pontiff and will be arranged for next year.

Accompanied by his spouse Mrs. Andri Anastasiades as well as by the members of the Cyprus delegation which included the Ambassador of the Republic to the Holy See Mr. George Poullides, the Minister of Energy, Commerce and Industry Mr. Yiorgos Lakkotrypis, the Government Spokesman Mr. Prodromos Prodromou and government staff, President Anastasiades arrived in the morning at the Vatican, where he was officially received.

A private meeting with Pope Francis followed and, subsequently, Pope Francis received the members of the Cyprus delegation in the presence of President Anastasiades.

At the conclusion of the meeting, the President and the Pope exchanged commemorative presents. The President of the Republic presented Pope Francis with a silver "Kapnistomerecha" (a censer and perfume holder set)and a copy of the book "Multi-Religious Cyprus." Pope Francis presented President Anastasiades with a copy of a copperplate engraving of the St. Peter Basilica of 1545 A.D., and his circular about the protection of the environment.

Later on, the President of the Republic met with the Prime Minister of the Holy See Cardinal Pietro Parolin and subsequently with the Secretary for Relations with States (Foreign Minister) of the Holy See Archbishop Paul Richard Gallagher.

In his remarks following his visit to the Holy See, the President of the Republic said:

"My official visit to the Vatican has concluded a little while ago. In the course of the visit, the first meeting was with Pope Francis, a visit which was very productive, but also particularly important in the sense that we had the opportunity to explain the initiatives that the UN Secretary-General is undertaking, and also the efforts to date for the solution of the Cyprus problem, in addition to discussing the multiple international problems the world is facing, such as the fight against human slavery, climate change, the refugee problem, the conflicts around the globe and in particular the conflicts in the Middle East .

The Pontiff not only listened with special interest but is also aware and understands the difficulties that are caused as a result of the invasion and the occupation as well as from other illegal actions on the part of Turkey.

At the same time, I had the opportunity to invite the Pope to visit Cyprus, something that he accepted with great satisfaction. The visit will be arranged for next year, which coincidentally marks the celebration of the sixtieth anniversary of the Republic of Cyprus and ten years since the last visit of Pope Benedict to Cyprus.

The acceptance of the invitation gives us great satisfaction because the presence of a leader such as the Pope, with a vision that is particularly modern with regard to all the problems that humanity and generally human beings are facing, is exceedingly important taking also into consideration the effort through the interfaith dialogue to achieve peace and stability internationally.

I subsequently had the opportunity to meet with the Prime Minister and the Foreign Minister of the Vatican to whom I analyzed in detail the problems we face toward resolving the Cyprus problem, as well as the efforts of the UN Secretary-General, while reiterating our determination to participate in the tripartite meeting on the 25th of November in Berlin and our resolve to achieve, at last, something that will allow the resumption of the dialogue from where it broke off at Crans Montana.

With both the Prime Minister and the Foreign Minister, the talks expanded, of course, not only to the Cyprus problem but also the refugee issue and the various issues that were certainly discussed with His Holiness Pope Francis as well."

Message the Permanent Representative of Cyprus to the UN, to the ceremony for the 75th Anniversary from the signing of the Charter of the United Nations

Statement by the Minister of Foreign Affairs, Mr Nikos Christodoulides, on the occasion of the visit to Cyprus by the High Representative for Foreign Affairs and Security Policy and Vice-President of the European Commission, Mr Josep Borrell Fontelles