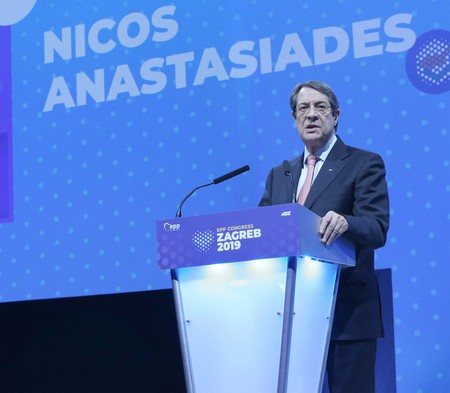 Address by the President of the Republic Mr Nicos Anastasiades at the EPP Statutory Congress 2019 in Zagreb, Croatia

Our Congress is certainly timely, as it comes at a critical moment of great challenges for Europe.

Challenges which are recorded by the EPP conclusions which we are to adopt.

Conclusions which constitute a strong manifesto which if we are to implement with determination and consistency we will provide a true hope to the European citizens and more importantly to the young generations for the years to come.

In this regard, within the limits of a short intervention, without ignoring the importance of other significant issues on our agenda, I will concentrate on few issues that need our urgent response as regards the prosperity of Europe and the entire humanity, as well as the cohesion of the EU.

Climate Change is the dominant issue of our time. To quote the late Jacques Chirac: “The earth and humanity are in peril, and we are all responsible. It is time now to open our eyes”.

Action is needed urgently at national, regional and international level to deal collectively and with consistency, to tackle both the roots and the adverse consequences of Climate Change, the effects of which are already evident in our planet.

Another issue that figures prominently on our common agenda is the need to address Migration, in a comprehensive manner by delivering on all fronts and not opting for a piecemeal approach. An effective and fair asylum system constitutes part and parcel of the holistic approach on Migration. All migratory routes deserve the same attention and vigilance.

The new MFF (Multiannual Financial Framework) also figures high on our European Agenda: a sound EU budget, fit for a Union of 27.

We acknowledge all efforts to modernise the budget and support actions undertaken.

However, this cannot be done at the expense of the two main investment and well established policies, namely the Cohesion Policy and the Common Agricultural Policy.

Today, the unity of the EU is more important than ever. The principles on which the Union was founded – peace, security, stability, prosperity and democracy – must not only be protected but reinforced.

As President-elect Ursula von der Leyen stated: “If we are united on the inside, nobody will divide us from the outside”.

This unity must be demonstrated concerning all challenges that might compromise the principles, rules and laws of the Union and solidarity should be seen not as a burden, but as a vehicle which enhances and strengthens the Union as a whole.

In this respect, I take the opportunity to express my sincere appreciation to our EPP family for their consistent support towards our efforts to reach a comprehensive and viable settlement on the Cyprus problem.

A support which becomes even more important amidst a period of continued tensions and violations by Turkey in Cyprus’ maritime zones.

Despite Turkey’s illegal actions, I wish to reiterate my strong will and determination for a positive conclusion of the upcoming tripartite meeting with the UN Secretary-General and the Turkish Cypriot leader which is to take place in a few days in Berlin.

Our aim remains none other than to reach a settlement that will reunite Cyprus; without any guarantees, foreign troops and external dependencies.

Today’s Congress marks the end of an era for the European People’s Party.

As his mandate in chair of the EPP ended, I want to warmly congratulate President Joseph Daul for his successful tenure.

President Daul was tasked with leading the EPP during one of the most historical difficult times for Europe.

He led our party with loyalty, openness and integrity, acting as a dedicated European and a true believer of solidarity, always serving the best interests of the EPP and the Union, but above all, the European citizens.

When, however, one door closes, another opens.

The Zagreb Congress also marks the beginning of a new and promising era for our party. I had the privilege to work closely with President Tusk at the European Council.

His strong commitment to principles and unity has always been the driving force in consolidating the European Council’s strategic role, while keeping member states together as one.

I have no doubt that under his skillful leadership, as well of the new leadership of the EPP which I warmly congratulate for their election, our political family will continue striving for a stronger, more democratic and closer to its citizens Europe.

We must seize the moment to ensure that the European party which pioneered the European political scene since 1976, remains at the forefront of political developments as their driving force.

Together, all EPP members, with determination and hard work we can fulfill the visions of the EU´s founding fathers, as well as our common one.

To deliver to the next generations a better future, a more and better Europe, a Europe of solidarity, shared responsibility, justice and equality; dedicated to its people and their prosperity.

In closing, I would like to thank once again Prime Minister Andrej Plenković for the gracious hospitality and wish every success to the Croatian Democratic Union at the upcoming Croatian Presidential elections.

I also extend warm wishes for a successful Croatian Presidency of the Council of the European Union starting in January 2020.