A series of interactive training seminars on Insolvency, organised by the School for Judicial Training of the Supreme Court in cooperation and with the financial support of the International Monetary Fund, was concluded with great success. The seminars took place between the 9th and 13th of December 2019 at the Supreme Court, with expert trainers, former Judge, Mr Leif Clark, from the United States and Madame Justice Marie Baker, Judge of the Supreme Court of Ireland.

District Court Judges, Legal Officers of the Supreme Court, Registrars and Officers of the Central Bank as well as the Ministry of Finance were informed by Madame Justice Baker on the successful application of the Insolvency Laws in Ireland, as the Cyprus Laws on Insolvency closely resemble those of Ireland. Madame Justice Baker also presented the new European Directive 2019/1023 on Preventive Restructuring and Second Chance and its implications for practice in Cyprus.

In a very practical manner, using problem sets and exercises, Mr Leif Clark walked the participants through the application of the provisions of the Company Law relating to the Appointment of Examiners and the Insolvency of Natural Persons in relation to Personal Repayment Plans.

Mr Leif Clark also gave a brief presentation on best practices in Case Management, from setting a date for hearing to the delivery of judgement, as well as how to deal with the issue of adjournments. Participants had the opportunity to ask questions, solve exercises and discuss practical problems they encounter.

A welcome address was delivered by Mr Erotocritou, Director of the Reform and Training.

Statement by Ambassador Andreas D. Mavroyiannis, Permanent Representative of Cyprus to the United Nations, at the Security Council Open Debate on the "Maintenance of International Peace and Security: Upholding the UN Charter" 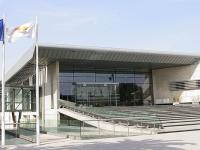 Seminars on Insolvency by the Supreme Court

Announcement by the Cyprus Delegation to GRECO