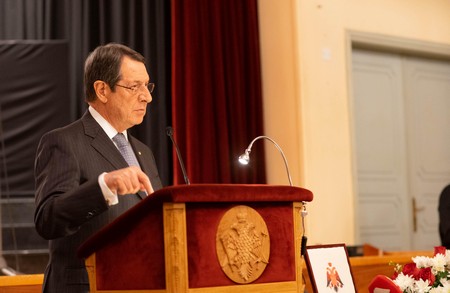 We are continuing our diplomatic and legal efforts to halt Turkey's unprecedented behavior, the President of the Republic, Mr. Nicos Anastasiades, said, tonight.

Speaking to reporters, on his way to the Cultural Centre of the Archbishop Makarios III Foundation, and summoned to comment on the new Turkish illegal actions in Cyprus’ EEZ, the President of the Republic said that "unfortunately, they continue to violate international law, and we continue our efforts, certainly, through diplomatic and legal actions, in order to deter this unprecedented behavior. "

Asked whether the EU should take tougher measures against Turkey, since what had been announced so far did not work dissuasively, President Anastasiades said: “tougher, I do not want to create any illusions or the image that Europe is ready to take such measures, at least at this time. Therefore, what I am saying is that we will continue with the same determination and the implementation of the energy program and the steps in every direction, in the hope that if they [Turkey] want peace, if they want a solution to the Cyprus problem, they will finally have to show the least respect for what constitutes the rules of international law.”

The President of the Republic met with the President and the Prime Minister of Bulgaria, in Sofia