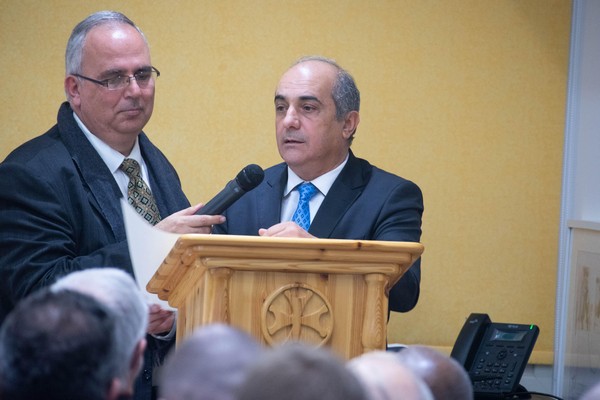 Address by the President of the House of Representatives, Mr Demetris Syllouris, at the opening ceremony of the Meeting of the Secretaries General of the Conference of the European Justice and Peace Commissions

It is a pleasure for me to address the Opening Ceremony of the Meeting of the Secretaries General of the Conference of the European Justice and Peace Commissions and to welcome you all to Cyprus.

The work of organisations such as yours, promoting justice, peace and respect of human dignity, is particularly relevant to Cyprus’ realities. I therefore consider your presence in our country an excellent opportunity to acquire an insight into the situation on the ground. This not only holds true for witnessing the consequences of the blatant violations of international law and human rights principles, resulting from the 1974 Turkish invasion and continuing occupation, but also for perceiving the multicultural character of our society, also reflected in the composition of “Justice and Peace Cyprus”.

The subject of your meeting, “Peace and Reconciliation in Cyprus and the Middle East: Achievements and Obstacles” is highly topical. Cyprus and the Middle East region face a number of challenges, including security, cultural and spiritual ones, as a result of the intense turbulence and conflicts in the region. The underlying cause of the never-ending instability is the rise of two conflicting approaches in this region: the approach of confrontation, interference and the use of violence, on the one hand, and the approach of peace, cooperation, welfare and peaceful coexistence, on the other.

Cyprus clearly lines up with the followers of the second approach. By focussing its regional activities on promoting peace and stability and through tangible and multiform cooperation, Cyprus aims at consolidating joint benefits for the people of the region. To that end, during my mandate, I aspire to fully put into effect specific initiatives, including the creation of a Middle East Cooperation Center and the promotion of the Arabic language in Cyprus. In this context and spirit, I took the initiative to invite Presidents of Parliaments of countries of the Middle East to the 13th Conference of Presidents of Parliament of Small States of Europe, which the House of Representatives hosted in November 2019. On this occasion, a debate was held on ways in which Parliaments of Small European States and countries of the Middle East can promote inter-regional cooperation, particularly in the economic sector.

The House of Representatives international activities include many more examples in the same framework. Such examples are our participation in regional and interparliamentary conferences and forums and, together with the Hellenic Parliament, the promotion of trilateral forms of parliamentary cooperation, with a number of Middle East countries, namely Israel, Egypt and Jordan, aiming to extend this cooperation to other countries of the region as well. Our effort to act as a bridge regionally and between Europe and the Middle East has an ultimate goal: to overturn the existing negative spiral of violence and conflict in the region and create, instead, the conditions necessary to bring about peace, stability and prosperity for everyone.

Being certain you share this aspiration, I wish you very fruitful discussions and deliberations in your commendable meeting and overall endeavors in the same line.