Total employment in the Broad Public Sector in the 2nd quarter of 2020 reached 69.483 persons. The employment in General Government was 63.792 and in the Publicly Owned Enterprises and Companies 5.691 persons.

In General Government, which consists of the Government, Non-Profit Organizations and Local Authorities, total employment reached 52.476, 7.115 and 4.201 persons respectively. 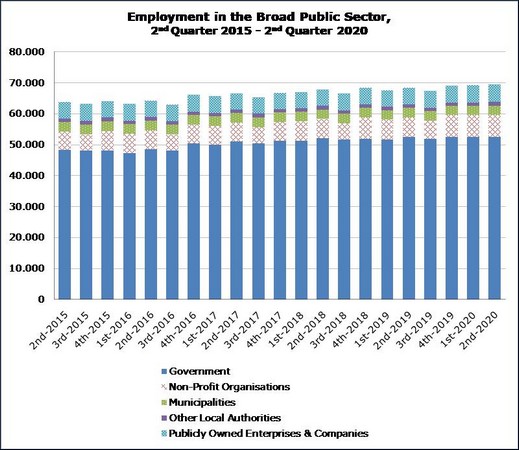 Compared to the 1st quarter of 2020, the employment in the Broad Public Sector increased by 220 persons (0,3%). The employment in Central Government decreased by 51 persons (-0,1%) whereas in Publicly Owned Enterprises and Companies and in Local Authorities increased by 123 persons (2,2%) and by 148 persons (3,7%) respectively.

Data concerning employment in Government is provided by the Treasury and refers to the number of persons that were employed in the reference quarter while for the remaining sectors data is collected via a telephone survey each quarter from the Organizations.