Since 2012,” Alzheimer’s Disease International” has established September as Alzheimer’s World Month. In essence, it is an international campaign, which aims to raise public awareness about the disease, but also to activate the relevant bodies.

In this context, September 21 is World Alzheimer's Day. The Day offers the opportunity for enlightenment, but also for the fight against prejudice. It is noteworthy that 2 in 3 people worldwide believe that there is little or no information about dementia in their countries. There are over 100 forms of dementia, with Alzheimer's being the most well-known because it accounts for 50-60% of cases.

The effectiveness of Alzheimer's World Month is increasing year by year, but stigma and misinformation about the disease remain a problem that requires global management. A better understanding of dementia can help dispel myths and misconceptions about it. Although there is no cure for most forms of dementia at this stage, they are treated with care and support.

On the occasion of World Alzheimer's Day, scientists point out the need for prevention, but also early diagnosis of the disease. Common symptoms include memory loss, difficulty finding the right words or understanding others when they speak, difficulty performing routine tasks, and changes in personality and mood.

It is estimated that around 50 million people worldwide suffer from dementia, while every 3 seconds a new case is diagnosed somewhere in the world. Dementia can also occur in people under 65 years of age.

The theme of this year's "Let's talk about dementia" campaign is more relevant than ever, as the pandemic adversely affects dementia patients. Unfortunately, in some countries, quite high rates of COVID-19 deaths occur in people with dementia. According to Paola Barbarino, General Manager of Alzheimer’s disease International, “The consequences of this pandemic for dementia sufferers are disproportionate and there is a risk of forgetting them. Now more than ever we need to talk about it.

Dementia, and as we go through Alzheimer's World Month, we call on governments to ensure and publish transparent data and to increase their support for people with dementia."

As the Office of the Commissioner for Volunteering and Non-Governmental Organizations, we welcome the support offered to dementia patients in Cyprus, both by Civil Society and by Governmental and Non-Governmental Organizations. On the occasion of September 21, let us turn our attention to the families of the sufferers, who have to face not only this soul-destroying disease, but also the stigma of society. With the right information, we can and should "embrace" these people. Only in this way will the unacceptable behaviors disappear, which make the patients' relatives hide them from shame, instead of helping them to live with dignity. 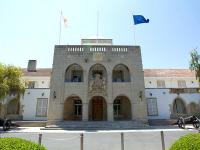