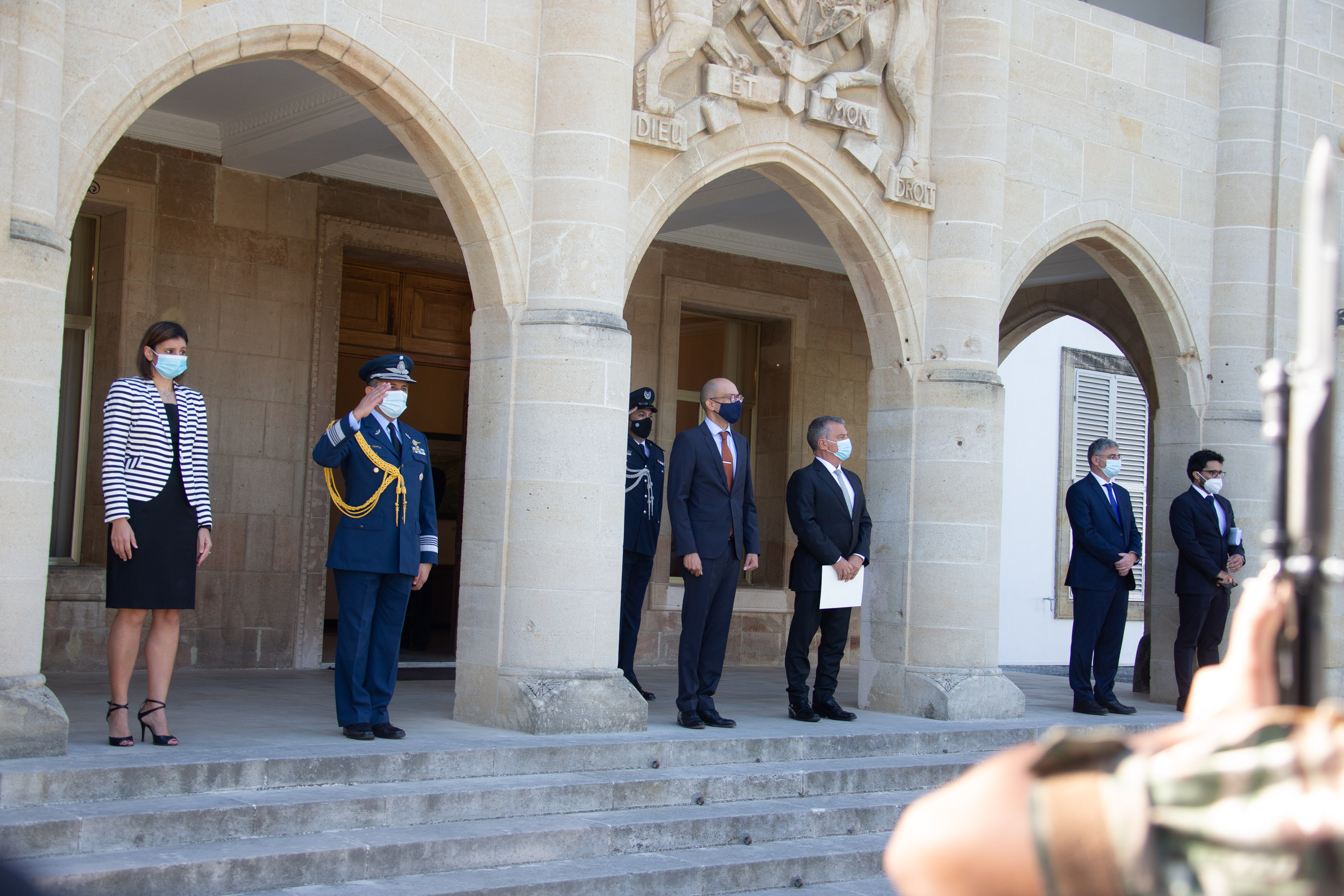 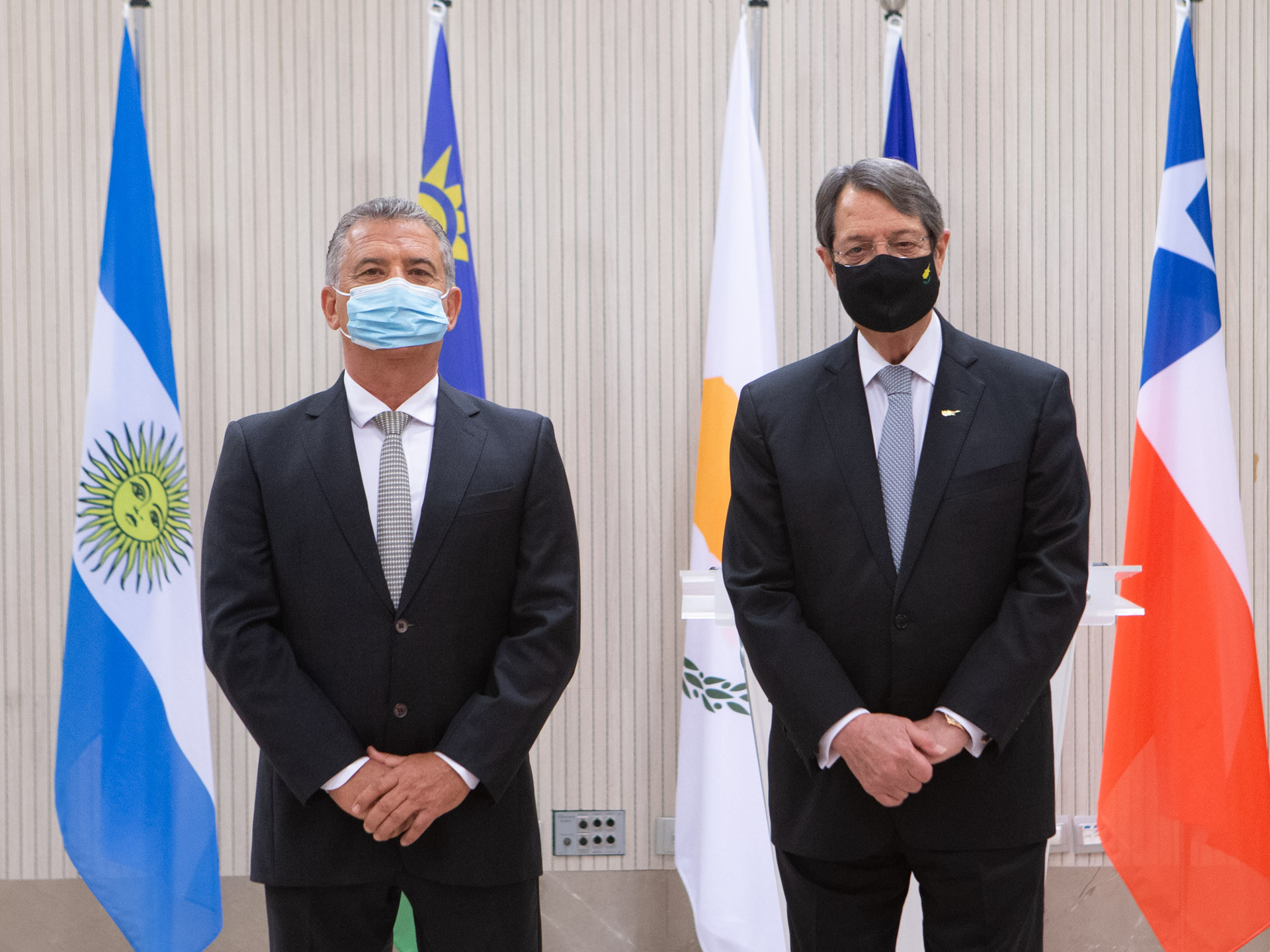 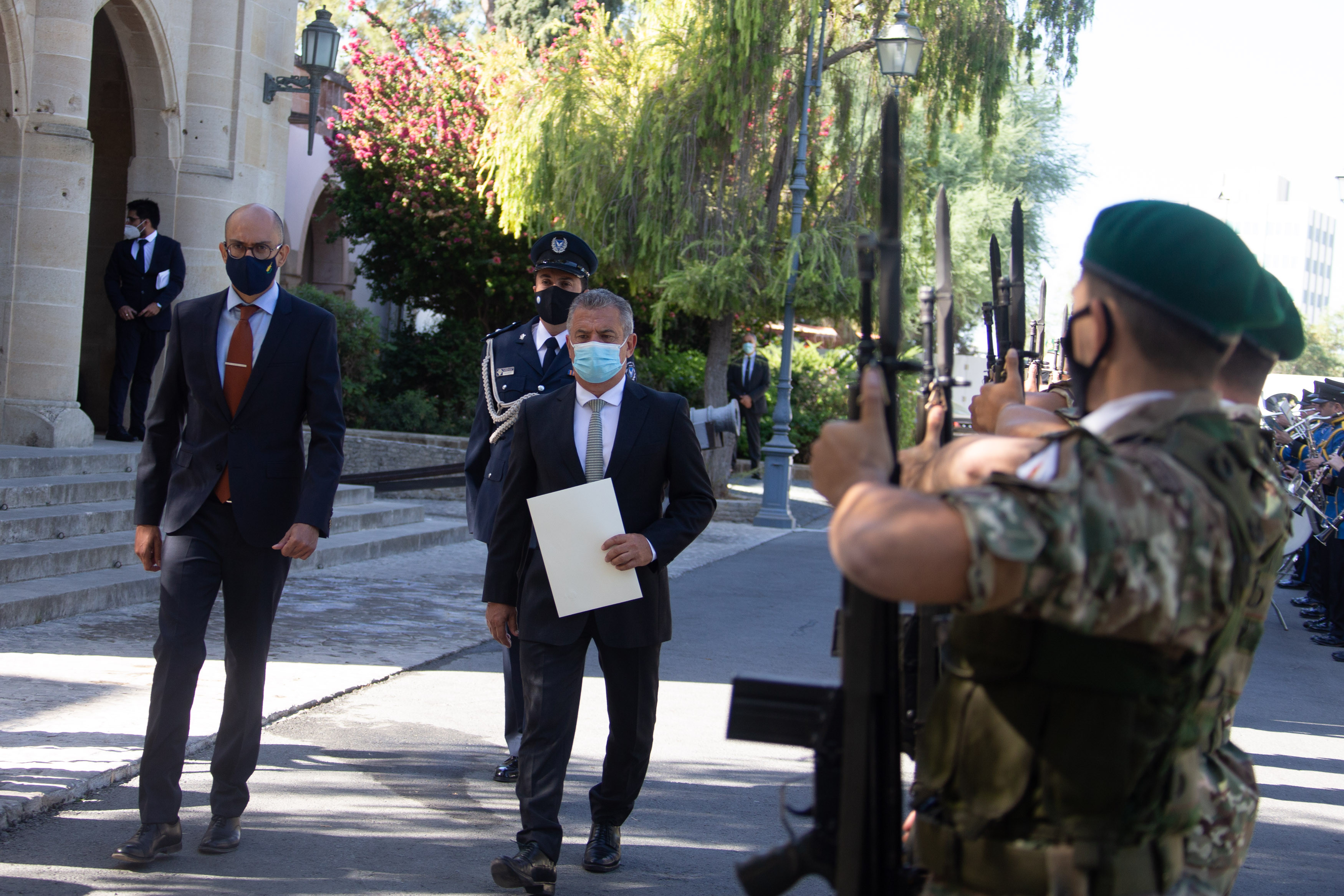 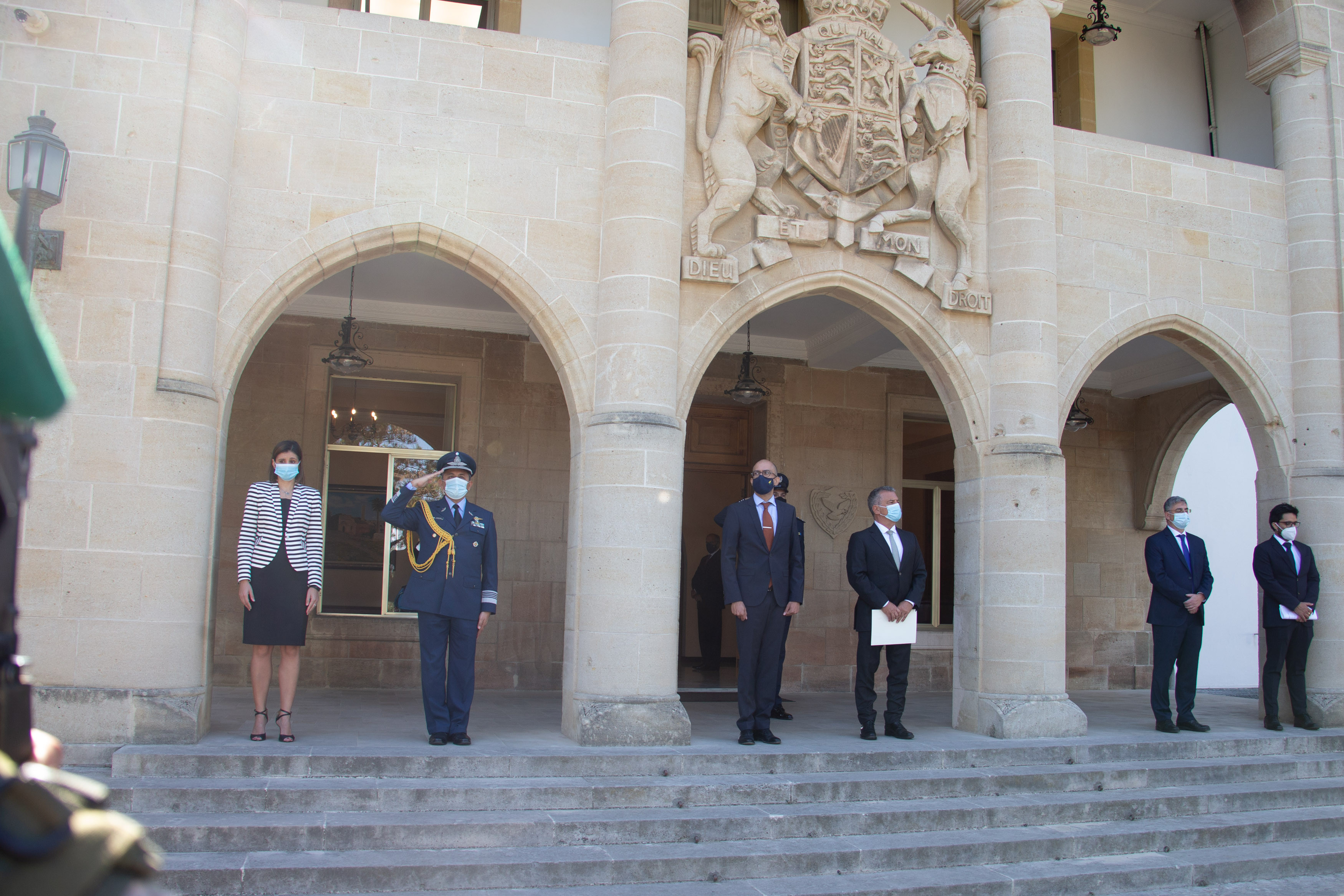 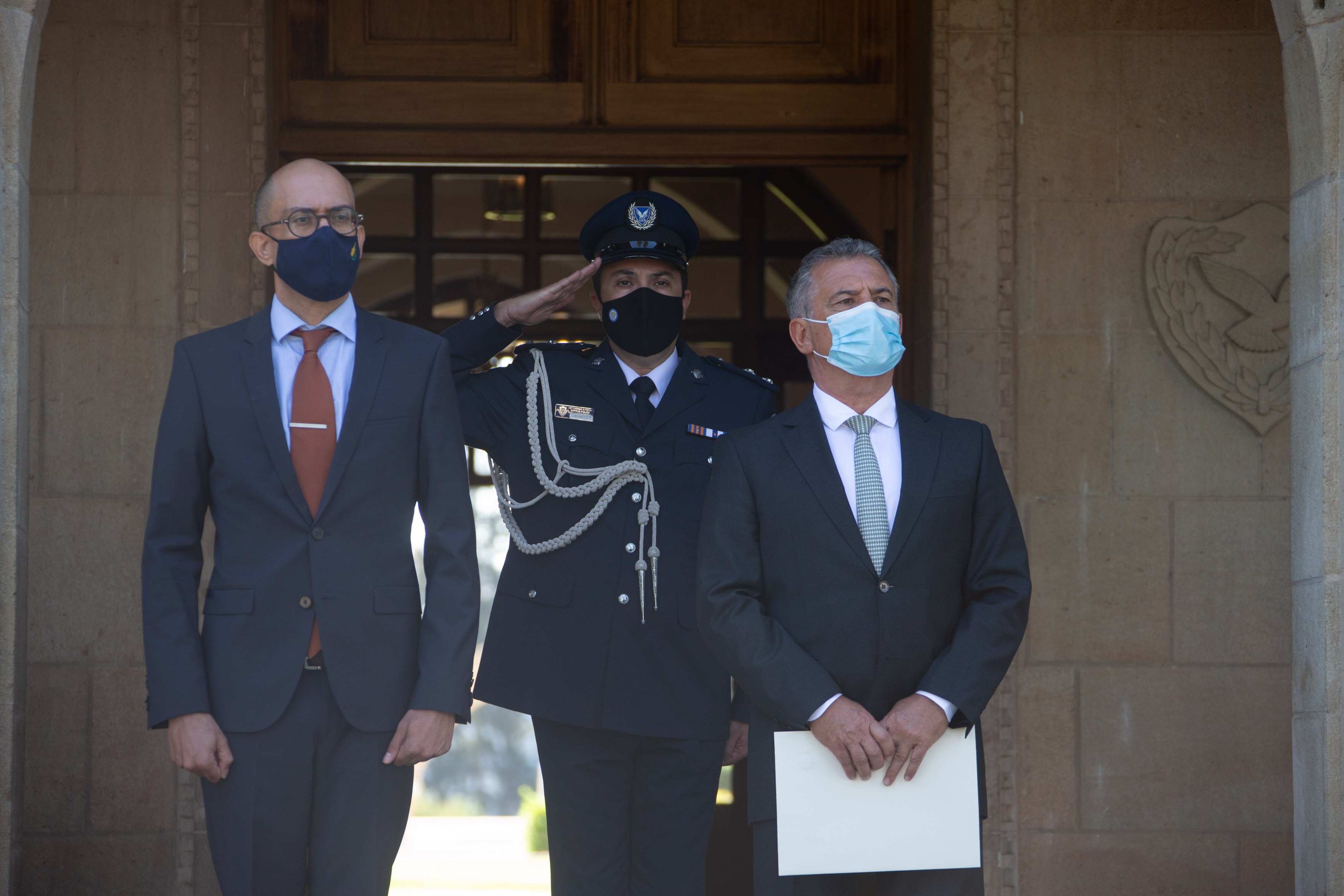 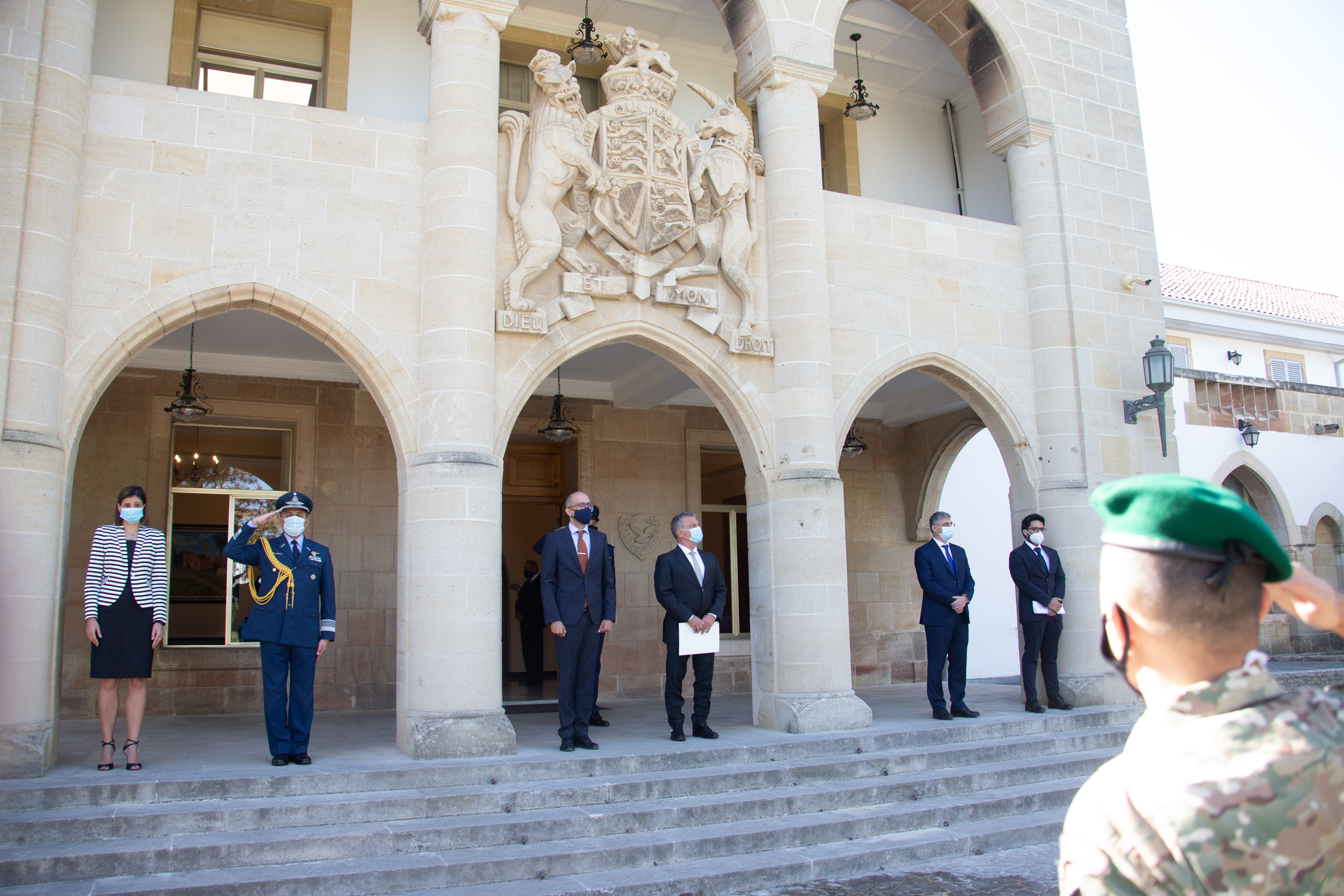 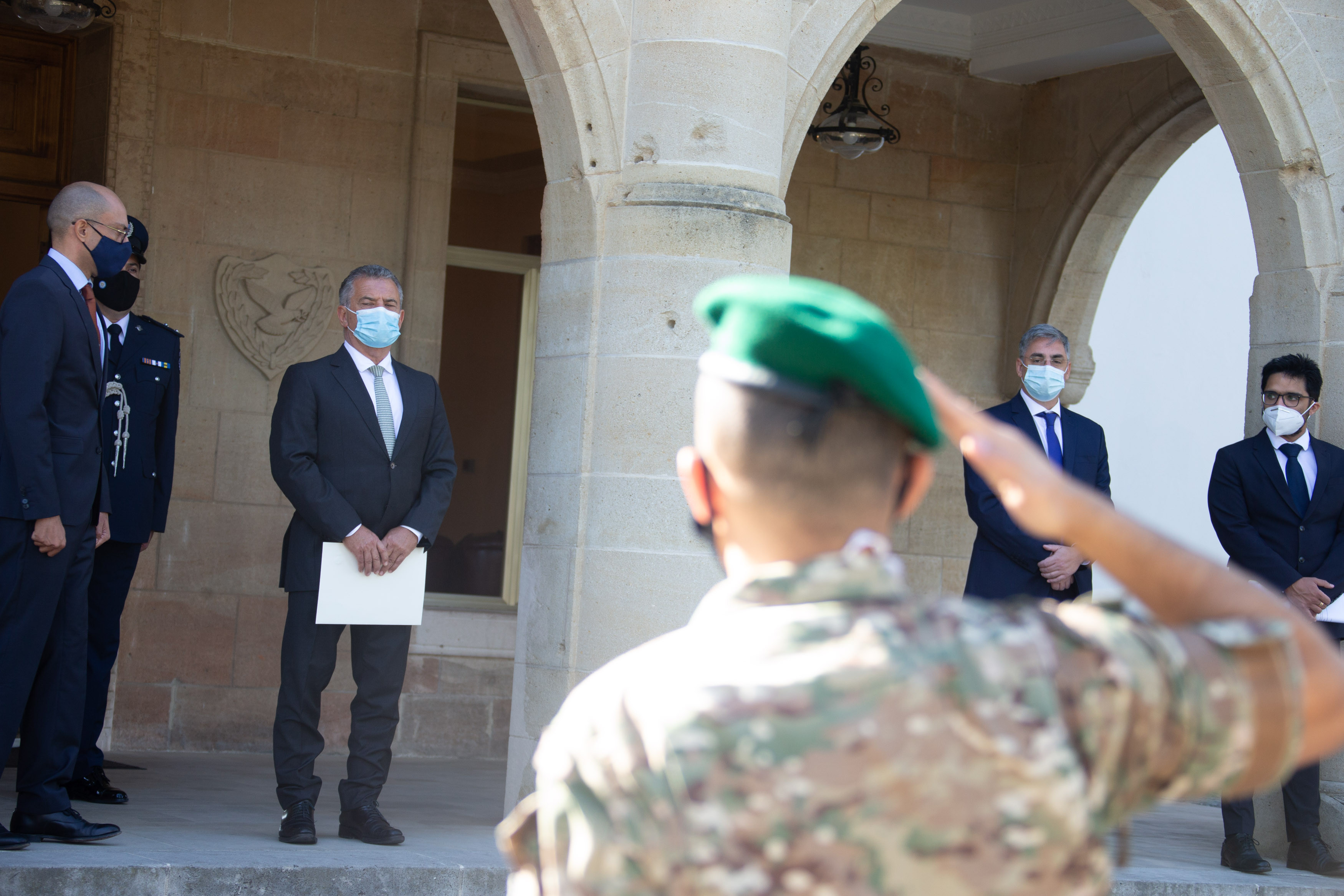 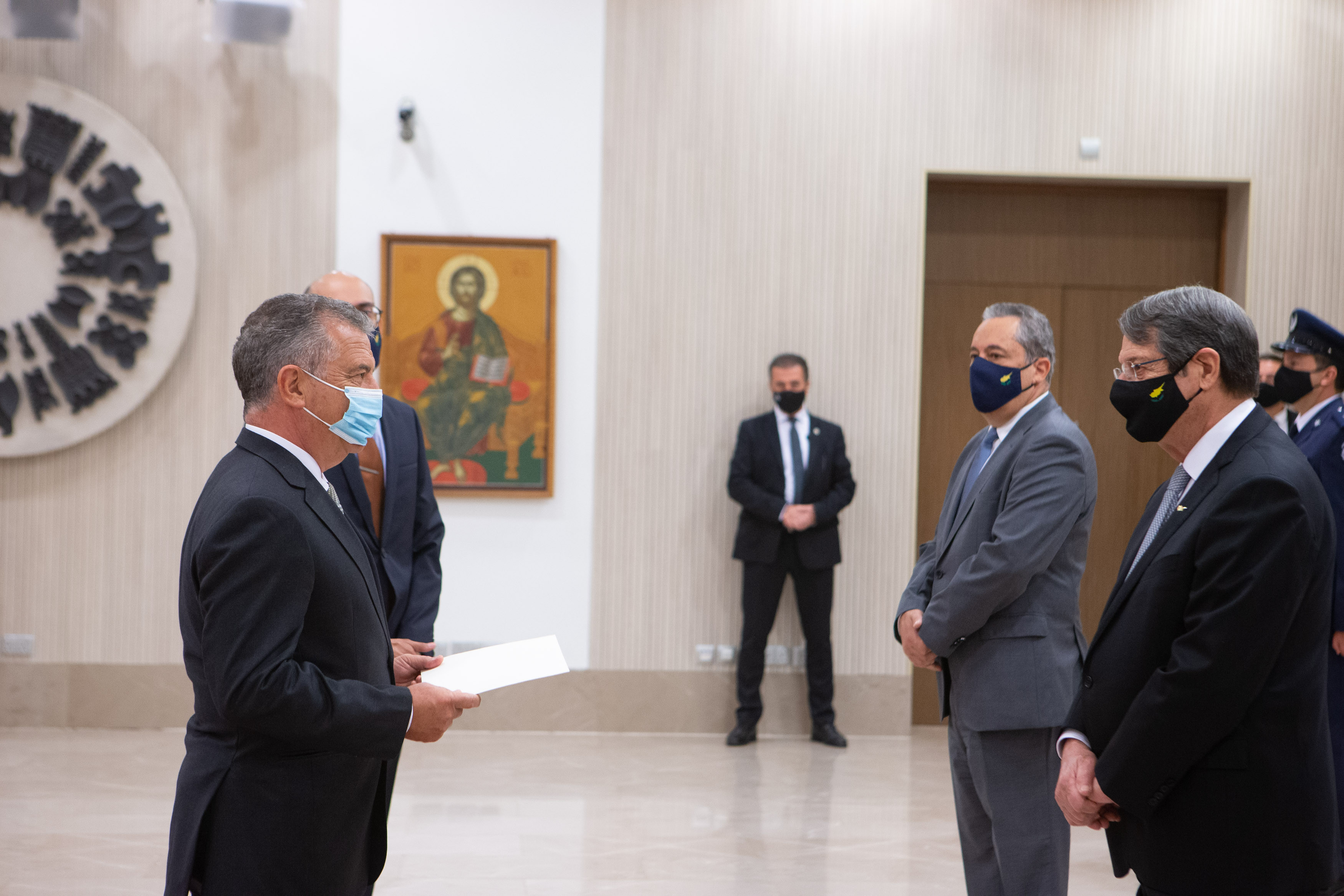 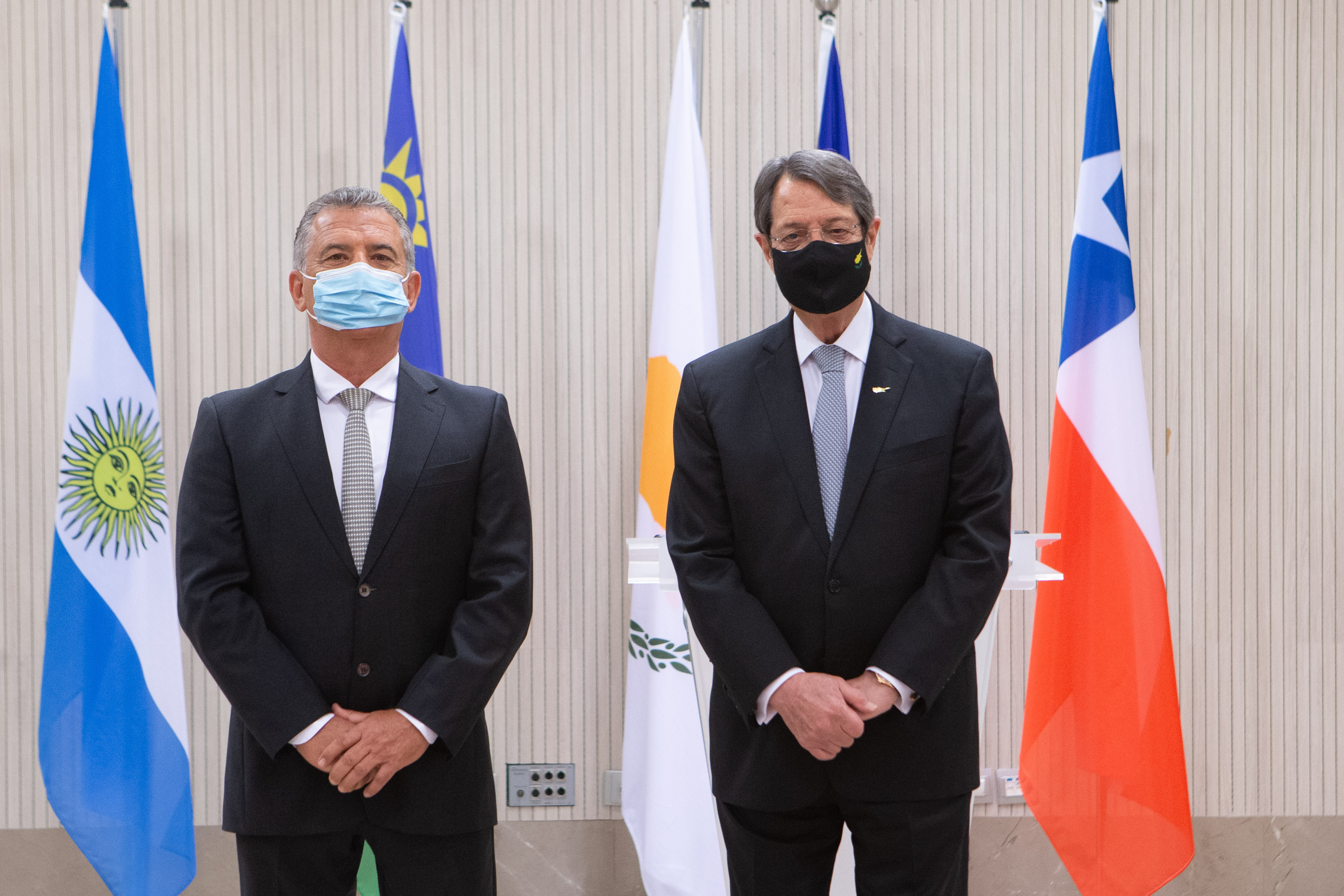 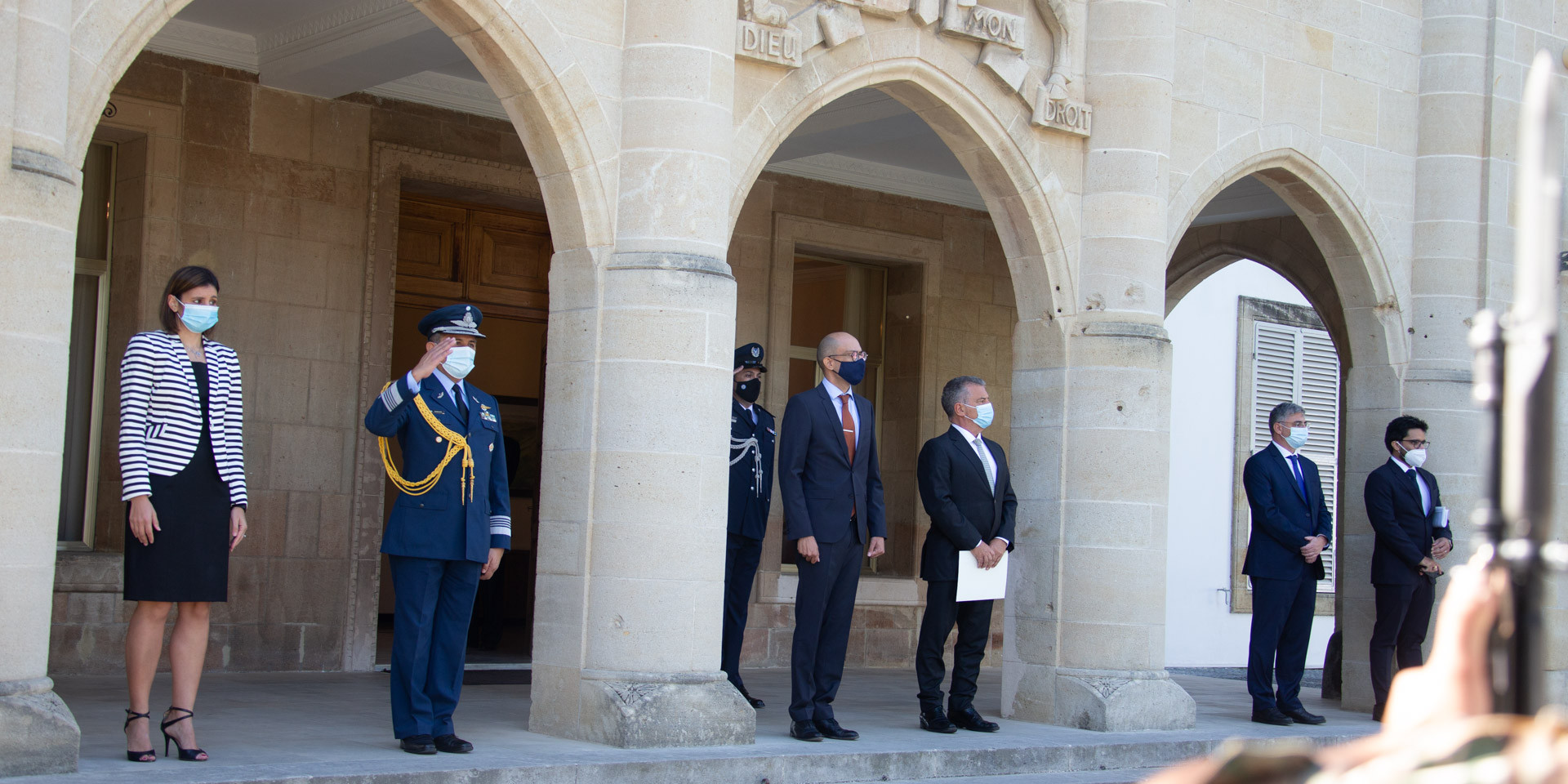 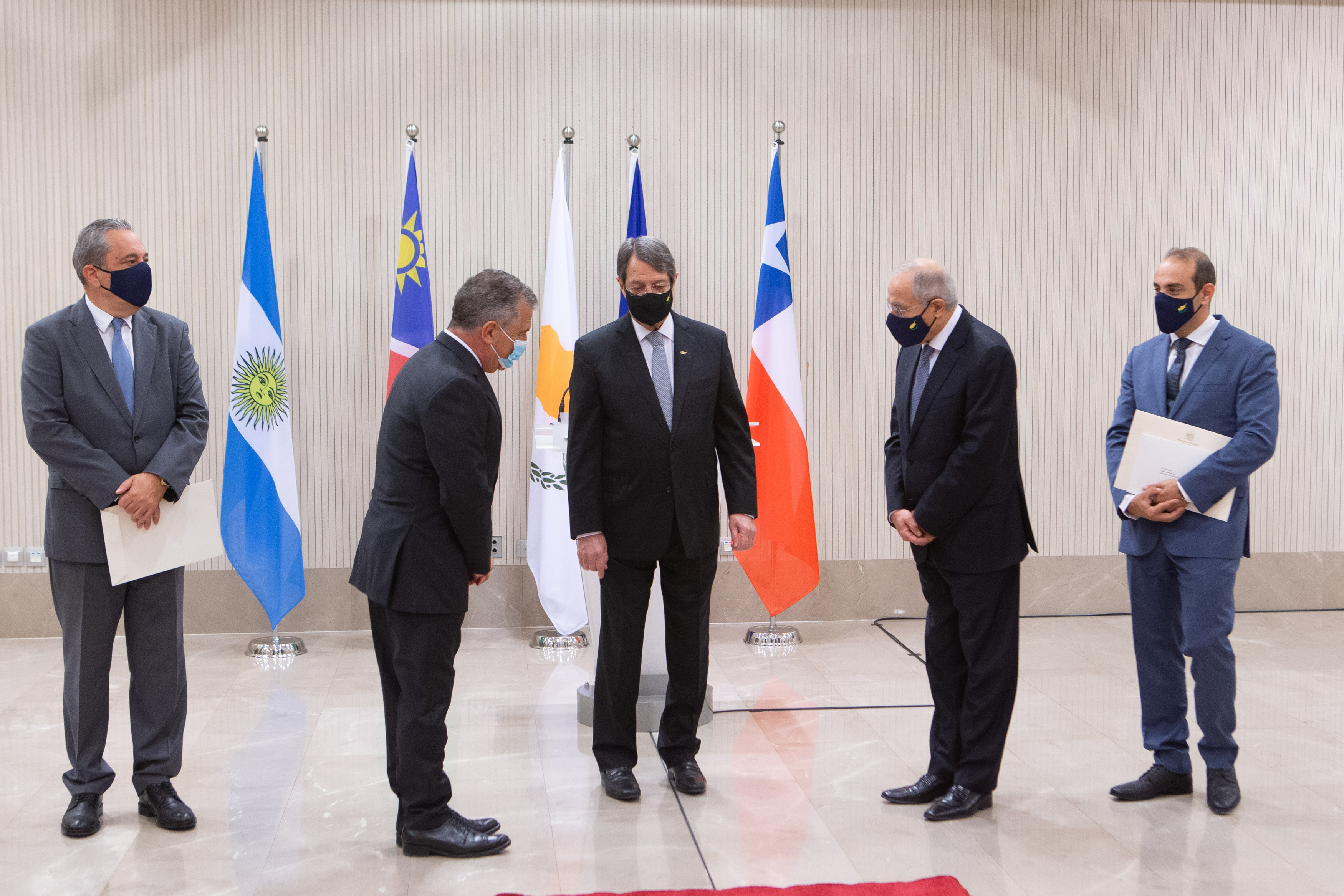 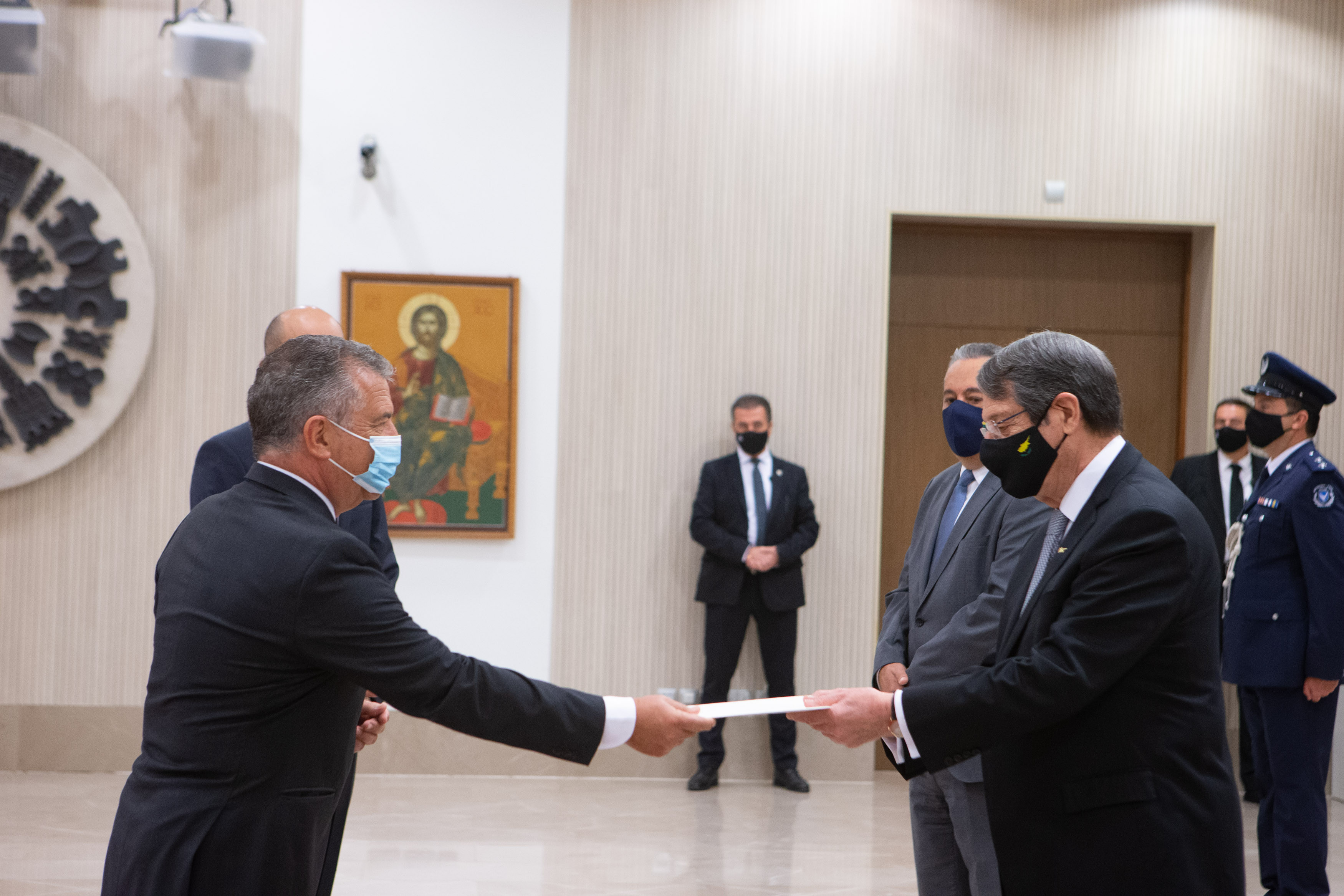 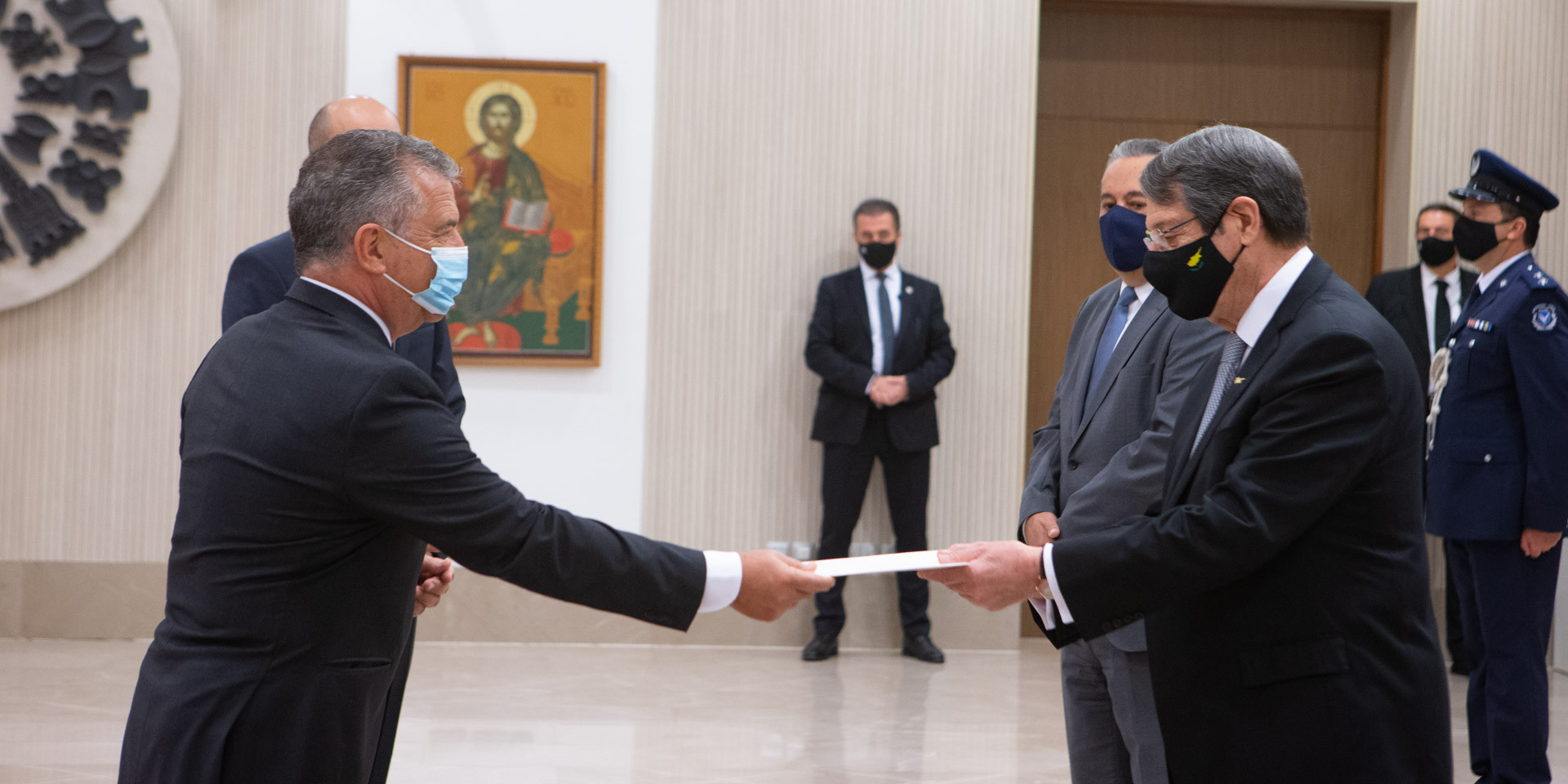 The President of the Republic, Mr Nicos Anastasiades, received the credentials of the Ambassador of the Argentine Republic, Mr Sergio Daniel Urribarri, during a formal ceremony held at the Presidential Palace on Thursday, October 29, 2020.

Mr President, Nicos Anastasiades, representatives of the Government of the Republic of Cyprus and of the diplomatic corps here accredited, ladies and gentlemen, friends.

It is a distinct honor and a pleasure for me to be here in order to present my credentials as Ambassador of the Argentine Republic in the Republic of Cyprus to Mr Nicos Anastasiades, President of Cyprus. I wish to convey to you, Mr President, the warmest regards of our President, Dr. Alberto Fernández.

Thousands of kilometers stretch from the Mediterranean costs of Cyprus to the South Atlantic shore of Argentina. This physical remoteness does not entail a lack of heartfelt proximity: Argentinian participation in the United Nations Peacekeeping Force in Cyprus (UNFICYP), initiated decades ago, bears testimony both to Argentina's commitment to the peaceful resolution of conflicts throughout the world and to our persistent support for a free and unified Cyprus. Generations of Argentine servicemen have contributed their intelligence and strength to the preservation of peace in this island.

And along with the service they fulfil here, these men and women of our Armed Forces acquire a knowledge, respect and love for Cyprus that they never fail to carry home to Argentina, where this island's name is synonymous with a place of welcomeness and warmth. This deep-ingrained feeling I intend to transform into concrete, practical joint projects for our mutual benefit.

Indeed, our challenge and goal now is to deepen, strengthen and diversify the nature and scope of Argentine-Cypriot cooperation. It is the Argentine government's intent that during my term as Ambassador the multiple possibilities for association and shared growth that our time-honored friendship affords progress and develop.

In addition, I think it my duty to take advantage of this opportunity to convey to you, ladies and gentlemen, that Argentina wishes to reaffirm its principled support to the efforts for the resumption of negotiations under UN auspices for a solution to the Cyprus Problem on the basis of International Law and in line with the UN Charter and the relevant United Nations resolutions.

I thank you all for this beautiful reception and assure you that you will find in this Argentine representative, as is our tradition, a good partner and a true friend of Cyprus”.

“It is with great pleasure that I receive today your Letters of Credence, appointing you as the new Ambassador of the Argentine Republic to the Republic of Cyprus. Please accept my heartfelt congratulations for your appointment, along with my best wishes for every success in the performance of your high duties. I also wish to assure you that my Government will provide you with every assistance you may need in the fulfilment of your mission.

Cyprus and Argentina enjoy long-standing and friendly relations. I avail myself of this opportunity to express my eagerness to work closely with you, in order to explore new fields of cooperation, as well as deepening and enhancing existing ones, for the mutual benefit of our two countries and peoples.

Argentina’s participation in the UNFICYP is, I must say, the epitome of Argentina’s positive contribution the Republic of Cyprus. The large and committed Argentinian department is now a point of reference on the UNFICYP presence and mission in Cyprus. I would like to emphasize that Cyprus deeply appreciates your country’s continued commitment and contribution to the United Nations Peace Keeping Force in Cyprus and I wish on this occasion to pay tribute to the Argentinian servicemen and officials whom have served in the UNFICYP.

Our two countries, Excellency, share many common interests on international issues and cooperate seamlessly in international fora, a cooperation that I am particularly pleased to attest that it extends to an excellent record of reciprocal support to each other’s candidatures.

As a member state of the European Union, Cyprus will continue to avidly support the deepening of engagement and broadening of cooperation with Argentina and the enhancing of the transatlantic relationship through the EU-Mercosur Trade Agreement. Furthermore, Cyprus strongly supports the EU-LAC relationship which we actively seek to enhance for the benefit of the people of the two regions.

Our priority remains none other than addressing the unacceptable current state of affairs with the continuing Turkish occupation of 37% of the territory of the Republic of Cyprus, since there is no doubt that lasting peace and stability can only be achieved through the comprehensive settlement of the Cyprus problem.

Cyprus highly values Argentina’s principled stance on the Cyprus Issue and your country’s consistent support to our efforts to reach a lasting solution which would safeguard the sovereignty, independence and territorial integrity of the Republic of Cyprus, without any third country dependencies, military troops and guarantees.

Regrettably, Turkey’s illegal drilling operations within our Exclusive Economic Zone run contrary to the necessity of having a good and positive climate that will enable the resumption of the negotiating process under the auspices of the United Nations. These Turkish actions have been strongly condemned by the international community and the EU, since they infringe upon the sovereign rights of the Republic of Cyprus and do not comply with International Law, particularly so the United Nations Convention on the Law of the Sea, and the principles of good neighbourly relations. Apart from escalating tensions in our turbulent region, the illegal and provocative actions by Turkey not only adversely affect our efforts to resume the peace process but they leave no room for bringing about the necessary conditions for all parties to engage in a results-oriented dialogue.  We do hope that Turkey will finally choose to adopt a more pragmatic and constructive approach and abide by International Law.

Moreover, we are gravely concerned by Turkey’s decision for the opening of the fenced city of Varosha, in yet another flagrant violation of UN decisions. The UN Secretary General has already expressed apprehension over this decision which is his own words might as well “heighten tensions and undermine chances for a resumption of peace talks”. On our side, we call upon Turkey to fully abide by pertinent UN Security Council Resolutions, which call for the return and resettlement of Varosha by its rightful and lawful inhabitants, and abandon any plans that are in clear violation of the 1979 High-Level Agreement between the Leaders of the two communities, as well as UN Security Council Resolutions 414 (1970), 442 (1980), 550 (1984) and 789 (1992).

Following the UN Secretary-General’s new initiative, I wish to reiterate once again that I remain strongly committed to resuming the negotiating process. But for the talks to resume with realistic prospects for success, it is imperative to create an environment which will be conducive for constructive and good faith negotiations. And certainly not under conditions of intimidation or threats by Turkey.

In welcoming you to Cyprus, I would kindly request you to convey a message of sincere friendship and solidarity to His Excellency the President of Argentina, Mr. Alberto Fernández, as well as to the friendly people the Argentine Republic”.