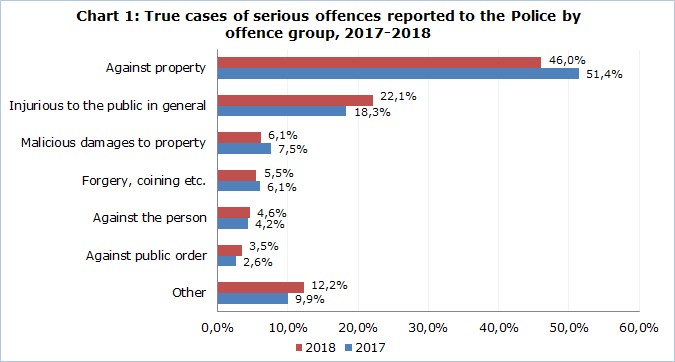 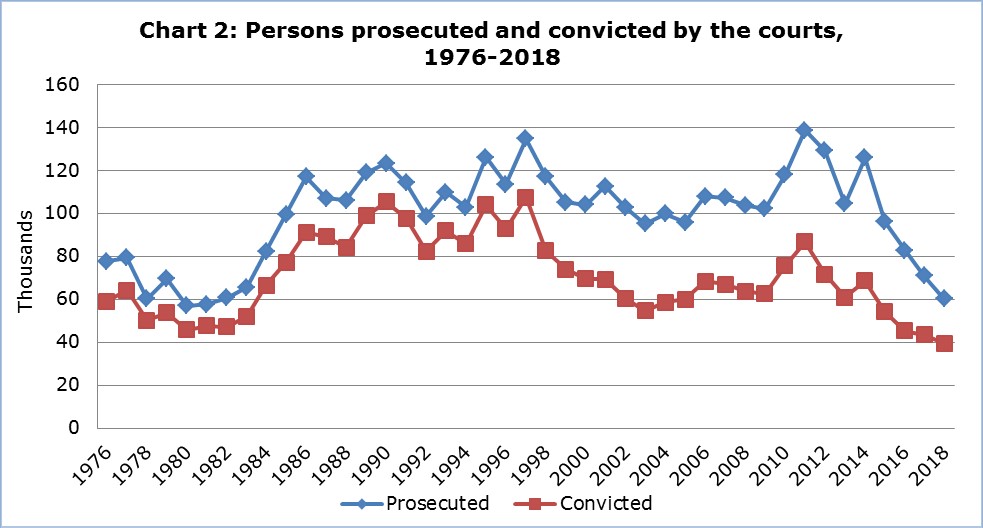 The type of sentence imposed varies according to the nature and gravity of the offence committed and the individual need of the offender for appropriate treatment. Both in 2018 and in 2017, the most commonly imposed sentence by the courts was fines, which was applied in 92,9% and 94,0% of convictions respectively.

The prison population on the 1st of September 2018 was 648 persons, 616 males and 32 females. The overwhelming majority of prisoners (96,5%) were 21 years of age or older, while 69,6% were convicted prisoners and 30,4% were prisoners awaiting trial. The Cypriot prisoners amounted to 56,5% of the total. The corresponding figures for 2017 were 589 males, corresponding to 94,2% of the total prison population which had reached 625 persons on the 1st of September 2017. The prisoners who were 21 years of age or older constituted 96,5% of the total, the Cypriot prisoners 60,0% and the convicted prisoners 73,9%.

Most of the sentences imposed in 2018 were of duration shorter than 18 months, thus resulting in a median length of sentence of 12,3 months compared to 10,9 months in 2017. The actual period of time spent in prison, however, is generally shorter than that imposed with the sentence, being reduced to a large extent by the use of remission. Consequently, the median length of stay in prison for the total number of convicted prisoners, computed based on the number of releases in 2018, was 2,3 months compared to 2,6 months in 2017 (based on the corresponding number of releases). 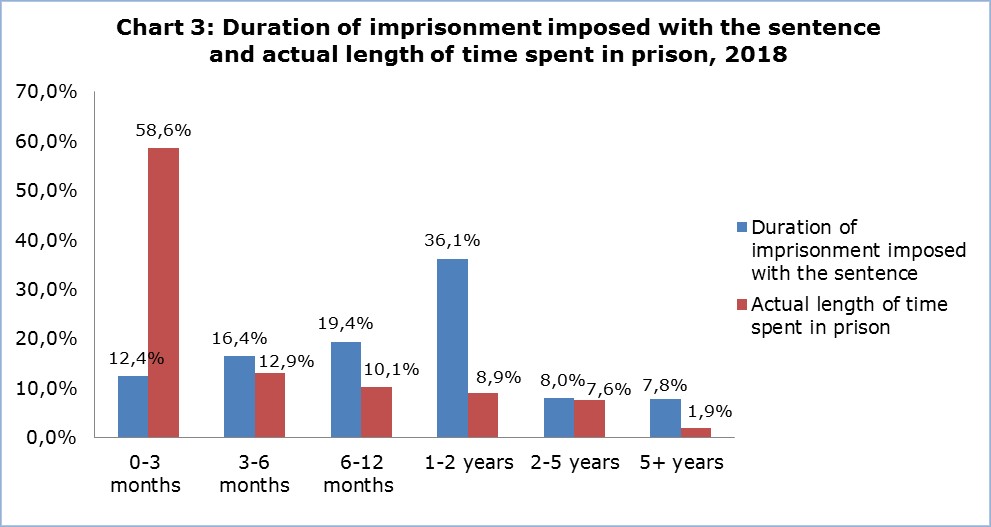 The survey aims at examining the overall crime situation in the country and covers three main branches: Police, Judicial and Prison statistics. According to the Police Statistics, the analysis is based on offences recognised as such by the criminal law and covers only serious offences reported to the Police which have been committed by adults, as well as all offences (serious and minor) committed by young persons (aged 14 years or older and younger than 16 years). As regards Judicial Statistics, the data refers to the year during which the penal proceedings at the courts were completed, that is, the year during which the prosecution of the suspects to the courts and the indictment took place. The year in question is not necessarily the year during which the offence was committed. Concerning Prison Statistics, the analysis covers both convicted prisoners and prisoners awaiting trial.

Serious Offences: Indictable offences, attempts or omissions, determined according to the Criminal Law of the country.

Index of Crime: The ratio of the number of true cases of serious offences reported to the Police per 100.000 inhabitants.

The survey in question is based on data from three sources: the Police, the Courts and the Prison Institution.

The first branch, “Police Statistics” is comprised of the sections “Cases”, “Offenders” and “Victims” and is based on administrative data acquired from the Police.

In the section “Cases”, the analysis concerns cases of serious offences reported to the Police and more specifically, detailed data relating to the time, place and manner in which the offence was committed, as well as the offence group or the individual offences in detail. The basic statistical unit is the case recorded. It is noted that, in many cases, more than one offence is reported, however only the most serious offence is recorded, according to the Principal Offence Rule.

In the section “Victims”, the analysis pertains to victims (both legal entities and natural persons), of the cases of serious offences reported to the Police, such as data on the age, gender and citizenship of the victims (natural persons), as well as the relationship between the victim and the perpetrator. The basic statistical unit is the victim.

In the section “Offenders”, the analysis concerns the total number of offenders, both legal entities and natural persons. As regards natural persons, it covers adults involved in the commission of serious offences, as well as juvenile offenders involved both in serious as well as minor offences. What may constitute a criminal act if committed by an adult may not be considered as such if committed by a child, since this is determined by the age of criminal responsibility, according to the country’s legal framework. An offender who is involved in a serious offence more than once (on separate occasions) in one year, is counted as two or more persons, i.e. s/he is counted as a different offender in each separate case. Data is presented, inter alia, on the age, gender and citizenship of offenders who are natural persons. The basic statistical unit is the offender involved.

In the second branch, “JudicialStatistics”, data is presented on criminal judicial statistics. It is based on annual returns of criminal proceedings submitted at the end of the year by the District Courts, the Assize Courts and the Martial Court and it covers both adult and juvenile offenders. The basic statistical unit is the “occasion” on which proceedings against a person are completed.

The third branch titled “PrisonStatistics” presents data based on monthly and quarterly reports of the Prison Institution. The basic statistical unit is the prisoner.