Reference to Cyprus during the UN press briefing

During yesterday’s (11.1.21) international press briefing at UN Headquarters, the Spokesperson for the Secretary‑General, Mr Stéphane Dujarric, and the Spokesperson of the President of the General Assembly, Mr Brenden Varma replied to questions on Cyprus, as follows:

Question: (AP) Apparently the Cyprus Government has announced that the Secretary-General was planning to meet with the Greek and Turkish Cypriot leaders. Can you confirm this and when is this meeting going to take place and what is he expecting? The next is related that the Turks just invited, the Turkish leader just invited the Greek leader for talks, and what’s the UN reaction to that?

Dujarric: On your last question I haven’t seen those reports but I would look into it. On your second question, just take a thing one step at the time. Jane Holl Lute is currently on the island. She is visiting Cyprus from the 10-12 of January for meetings with the Greek Cypriot leader, Mr. Nicos Anastasiades, and the Turkish Cypriot leader, Mr Ersin Tatar. This is part of her consultations she is carrying on behalf of the Secretary-General with the two Cypriot communities, as well as the guarantor powers in order to assess conditions to prepare for an informal meeting of the five plus one.

Question: That’s not quite what the Cypriot government spokesman said today. He said “the meeting was going to take place.” Can you check and see if that…

Dujarric: I think that each spokesperson says what they are told to say, within the parameters of what they can say.

Briefing by the Spokesperson of the President of the General Assembly, Brenden Varma

Question (Irish Examiner): Since the President of the General Assembly is Turkish would be interested in spearheaded in anyway the talks between “North Cyprus” and “South Cyprus” because there are talks presumably going to occur at this point.

Answer: There is no role that he is been playing in his capacity as President of the General Assembly. That’s outside of his mandate. 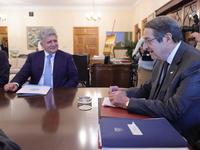 The President of the Republic received the Assistant UN Secretary-General for Europe, Central Asia and the Americas