Cookies management by TermsFeed Cookie Consent
Recent News
Scholarship to study at the College of Europe
Announcement by the Ministry of Foreign Affairs regarding executions of unarmed Armenians
Scholarship to study at the College of Europe
Photo Album – PoR – Award ceremony for Professor Paraskevas Sphicas
Photo Album – Labour Minister – Inauguration of the Photographic Exhibition “Cyprus – Austria: 60 Years of Diplomatic Relations”
Written statement by the Director of the Press Office of the President of the Republic, Mr Andreas Iosif, yesterday
Message by the President of the Republic, Mr Nicos Anastasiades, on the occasion of the Republic of Cyprus’ establishment anniversary
Photo Album - PoR – Reception for the members of the foreign Diplomatic Corps
Photo Album - PoR – Salute of the 1st October military parade
Photo Album - PoR – Statue of Archbishop Makarios III

Televised Easter Message by the President of the Republic, Mr. Nicos Anastasiades

The Greek Cypriot side has proven its adherence to international law and the protection of the interests of both the Greek Cypriots and Turkish Cypriots by abiding by the decisions of the Security Council, the President of the Republic Mr. Nicos Anastasiades said today while castigating Turkey and the Turkish Cypriot leadership for trying to wreck the new initiative of the UN Secretary-General on Cyprus through unacceptable and unlawful demands that violate international law and UN Security decisions.

In his televised Easter message, the President of the Republic said, among other things, that «a few days ago we have, once more, experienced Turkish intransigence, and have witnessed the arrogance of those who envision a new Ottoman empire».

He added that «during the recent UN informal conference on Cyprus, in Geneva, Turkey, and the Turkish Cypriot leadership showed contempt toward the UN Charter, the UN resolutions, and decisions on Cyprus, as well as the EU, by asking the UN Secretary-General to become complicit in their unlawful actions demanding recognition of sovereignty for the illegal regime established by and subordinate to Ankara» in the northern part of Cyprus which has been under illegal military occupation by Turkey since 1974.

«A demand that is not only contrary to international law and the terms of the UN SG’s mandate, but also clearly contrary to the will of the vast majority of the people of Cyprus, Greek Cypriots and Turkish Cypriots», the President said.

He added that the Greek Cypriot side has demonstrated its adherence to international law and the interests of both the Greek Cypriots and Turkish Cypriots by abiding by the decisions of the Security Council, the steadfast stance of the EU, the numerous rulings of the ECHR against Turkey, and all that has been agreed at various times between the parties.

The President noted that the Greek Cypriot side has, at the same time, turned to the UN Security Council Permanent Members as well as to the EU, and managed to have decisive interventions made thereby preventing the change in course sought by the Turkish side and the failure of the new exploratory initiative by the UN SG.

President Anastasiades further noted that the unacceptable positions submitted in writing by the Turkish Cypriot leader demonstrate, once more, the real objectives of Turkey over time, which aim either at the partition of Cyprus or its transformation into Turkey’s protectorate.

The President of the Republic made emphatically clear that as much as the Greek Cypriot side desires an honourable compromise, it is equally determined to reject every proposal or effort to legitimize the new illegal actions by Turkey.

He added that in order to activate the peaceful choice before us, the Republic of Cyprus will utilize all European and international fora and will mobilize all friendly countries.

He also noted that in addition to the steps taken in Geneva, he will brief his European counterparts on Turkey’s new provocations, during the informal EU Summit to be held in Portugal next Friday and Saturday. He underlined that in addition, in the next few weeks «we will engage in an international campaign to secure respect for and implementation of the decisions of the Security Council and the terms of the mandate of the UN SG».

Addressing the Turkish Cypriots, the President said that «the status quo on Cyprus is not only unacceptable for both communities, but worst of all it does not lead to a solution where all of us together, as European citizens, can enjoy the benefits of peace, security, and prosperity». For that reason, he stressed, «Ι respectfully invite you to give the battle united together for our own homeland, Cyprus, which we have loved and we keep on loving».

For the Televised Easter Message by the President of the Republic in Turkish press here. 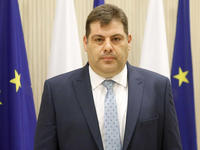 Written statement by the Director of the Press Office of the President of the Republic, Mr Andreas Iosif, yesterday