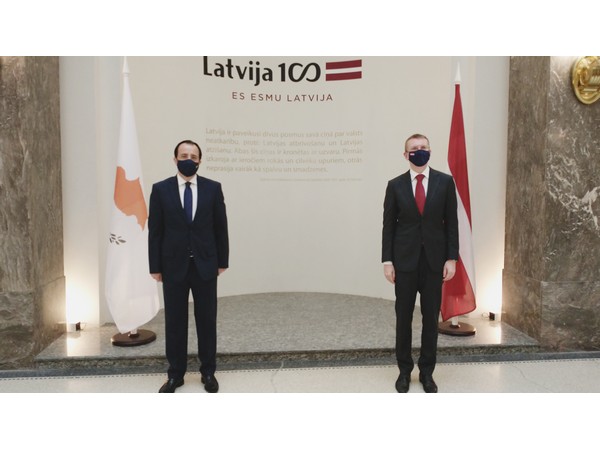 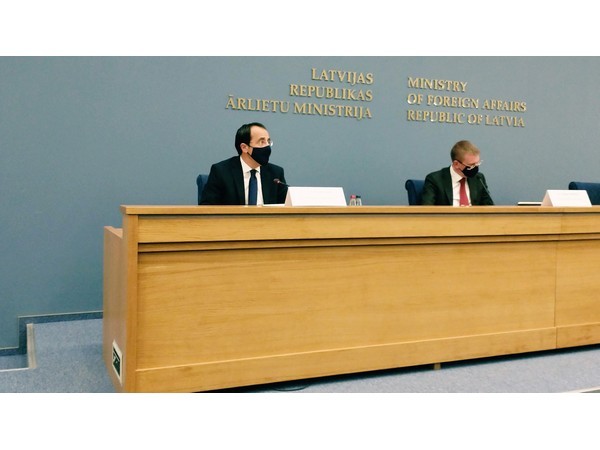 I am very pleased to be in Riga today, and very grateful to my good friend and colleague Edgars for the warm hospitality afforded to us. I note straight away that this is the first working visit by a Cypriot Foreign Minister to Latvia since 1997 and only the second overall. The fact that it takes place despite the pandemic, reflects the importance that we both attach to the enhancement of the bilateral relationship, as well as the untapped potential we see there for mutual benefit, not only at bilateral level but also by working together within the EU.

During my stay in this beautiful city, I look forward to being received later on by the President of the Republic, as well as by the Speaker of the Parliament.

Coming back to the consultations we have just concluded with Edgars and our respective delegations, I am very pleased to note that these were very open and productive, as one would expect of two countries that have been partners within the large family of the European Union for 17 years now. We had the opportunity to review the full spectrum of bilateral relations and to discuss specific ways in which we could further enhance them, identifying synergies and planning on how to best utilize the momentum generated by this visit.

To this end, we expressed our joint commitment to explore opportunities for cooperation in particular in the field of Research and Innovation, whilst with regard to our economic relations, the statistics suggest that there is ample room for improvement. We therefore decided to further explore possibilities in this area through the active engagement of our respective national Chambers of Commerce.

When it comes to tourism, I informed Edgars of the decision by the Government of Cyprus to start welcoming back tourists as of May 10th, without restrictions, on the condition that they will have completed their vaccination programme. The fact that direct connectivity already exists between Latvia and Cyprus is very promising ― indeed I travelled here on a direct flight from Larnaka early this morning ― and we shall do our best to facilitate its further enhancement.

As you can imagine, we also exchanged views on a range of current issues that feature prominently in our common European agenda, including on relations and interaction between the EU and its surroundings. Geography is destiny and it has an inescapable influence in the shaping of the history of nations. Cyprus and Latvia, as relatively small Member States that lie on the outside borders of the Union, have a vested interest in seeing the EU playing the active and decisive role that it should in order to ensure that Europeʼs immediate neighbourhood, both to the South ― from our perspective ― and to the East ― as far as Latvia is concerned ― will be predictable, secure and prosperous.

On my part, I briefed Edgars on the steady progress of our efforts to enhance relations and cooperation between all countries in the Eastern Mediterranean and the Greater Middle East, a region of particular importance, including from a geostrategic perspective.

Regarding the Eastern Partnership, I was very grateful to receive the invaluable insights of Edgars, as Latvia is a country with a unique understanding of its importance and the dynamics involved.

I cannot stress enough how important it is for Member States like Cyprus and Latvia to cooperate and to support each other within the EU framework. Solidarity in action, when it counts, is the least we expect from our European partners in times of need, as both our countries know only too well.

Having returned only at the end of last week from the informal meeting on Cyprus held in Geneva under the auspices of the UN Secretary-General, I naturally took the opportunity to brief Edgars on the discussions that took place there, as well as on the outcome of the meeting, which was unfortunately not the desired one for us, for the EU, for the UN and for the international community as a whole.

The positions put forward by the Turkish side run contrary to all relevant UN Security Council resolutions and to the common EU position as clearly set out on a number of occasions in relevant Decisions and Conclusions. These positions are outside the agreed framework, as they aim openly at partition and not reunification of the island.

Towards this end, I explained to Edgars that we rely on the international community and especially on our EU partners, to impress upon Ankara the message that it needs to put the interests of all Cypriots above what it narrow-mindedly perceives as its own national interest. From our EU partners, such as Latvia, we expect that this message will be delivered to Turkey in a clear and unambiguous manner on every occasion, including at the upcoming European Council in June, during which the prospect of a positive agenda in the EUʼs relations with Turkey will be discussed.

In closing, I would like to thank you once again for the warm Latvian hospitality. I look forward to working closely with you over the coming period to drive forward our bilateral and EU agenda and I look forward to welcoming you at the earliest opportunity in Cyprus so that we can follow up on our excellent discussions.

Statement by the Permanent Representative of Cyprus, Mr Andreas Hadjichrysanthou, on the Report of the Security Council for 2020 at the UN General Assembly, in New York