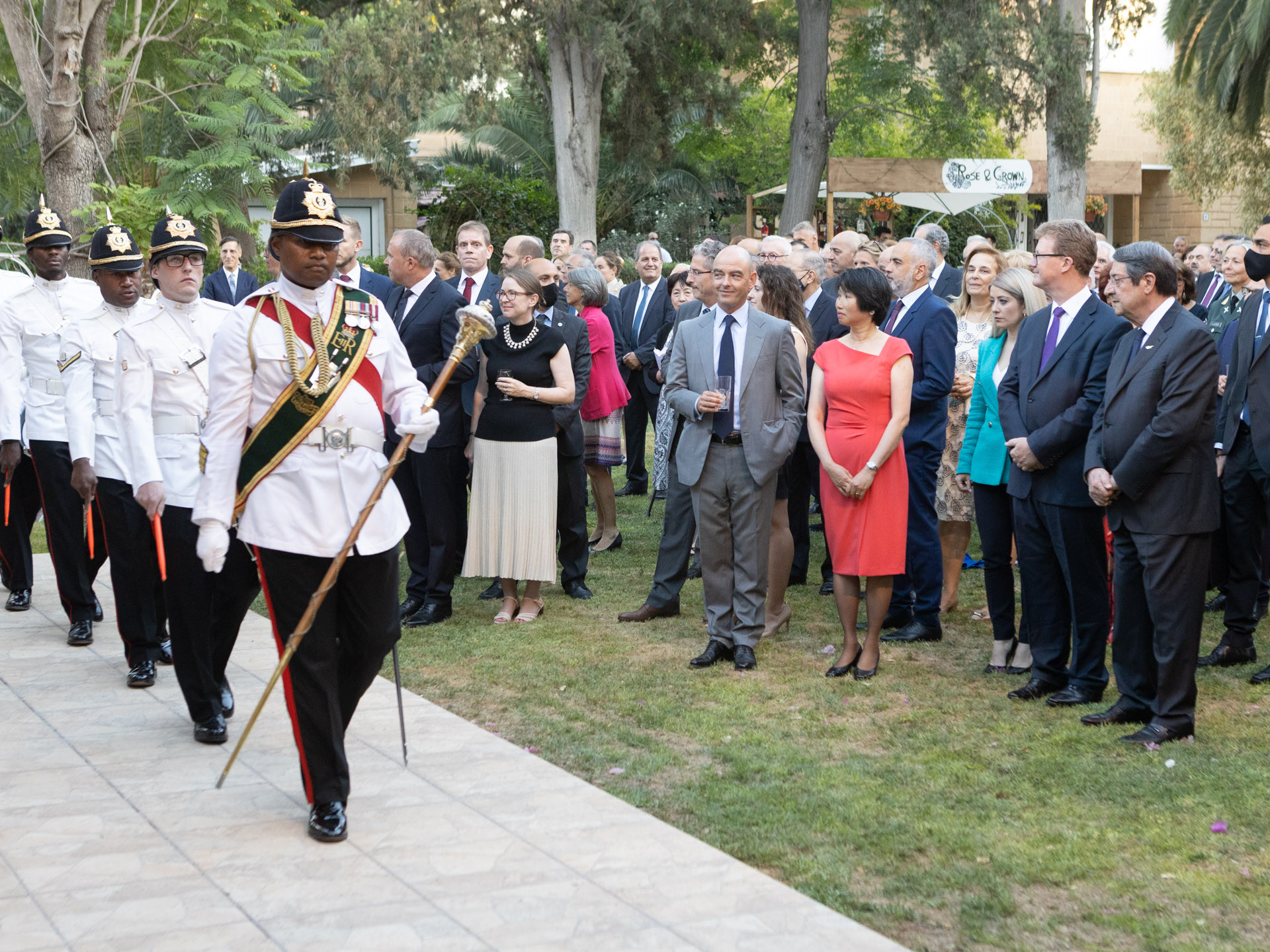 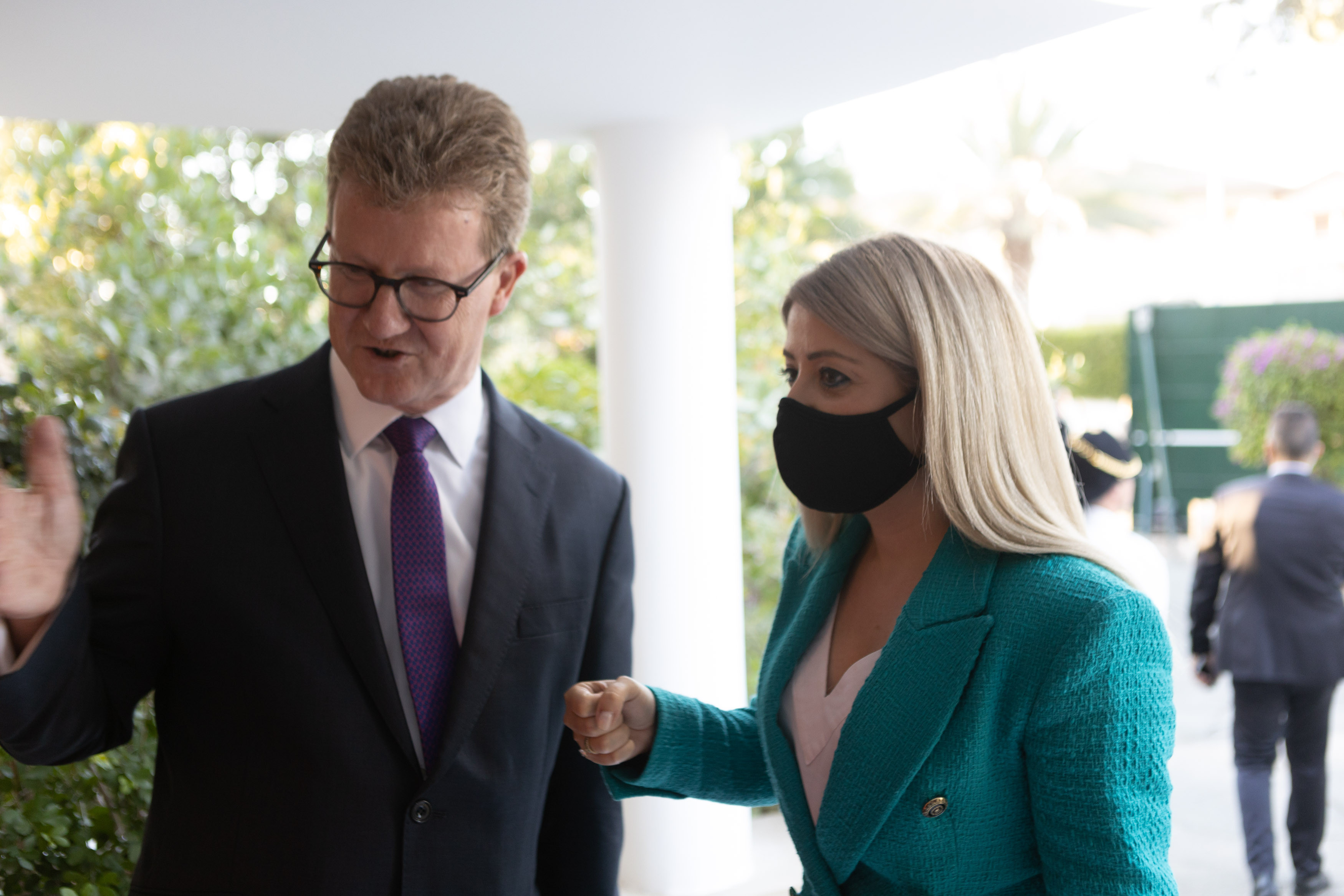 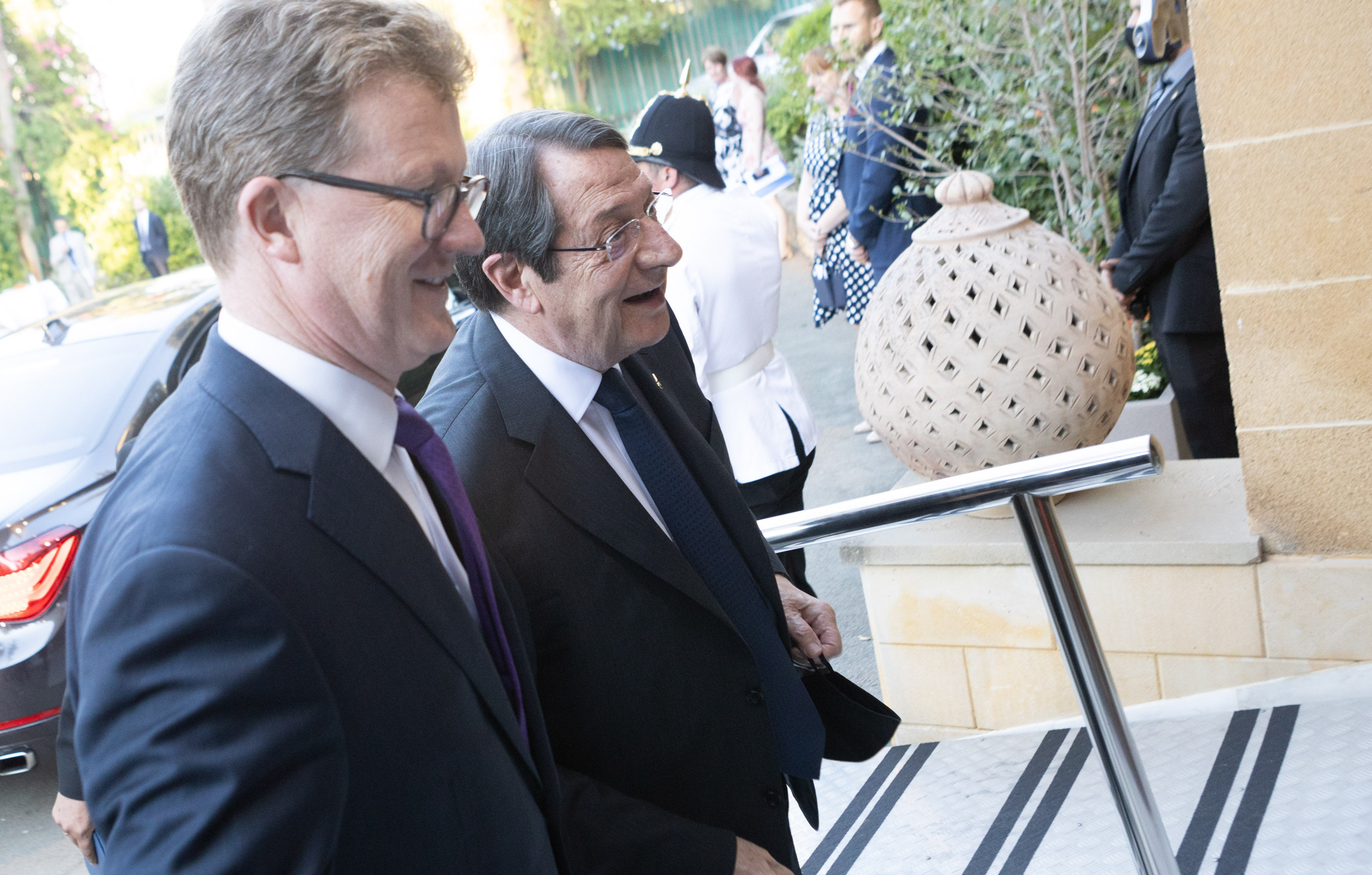 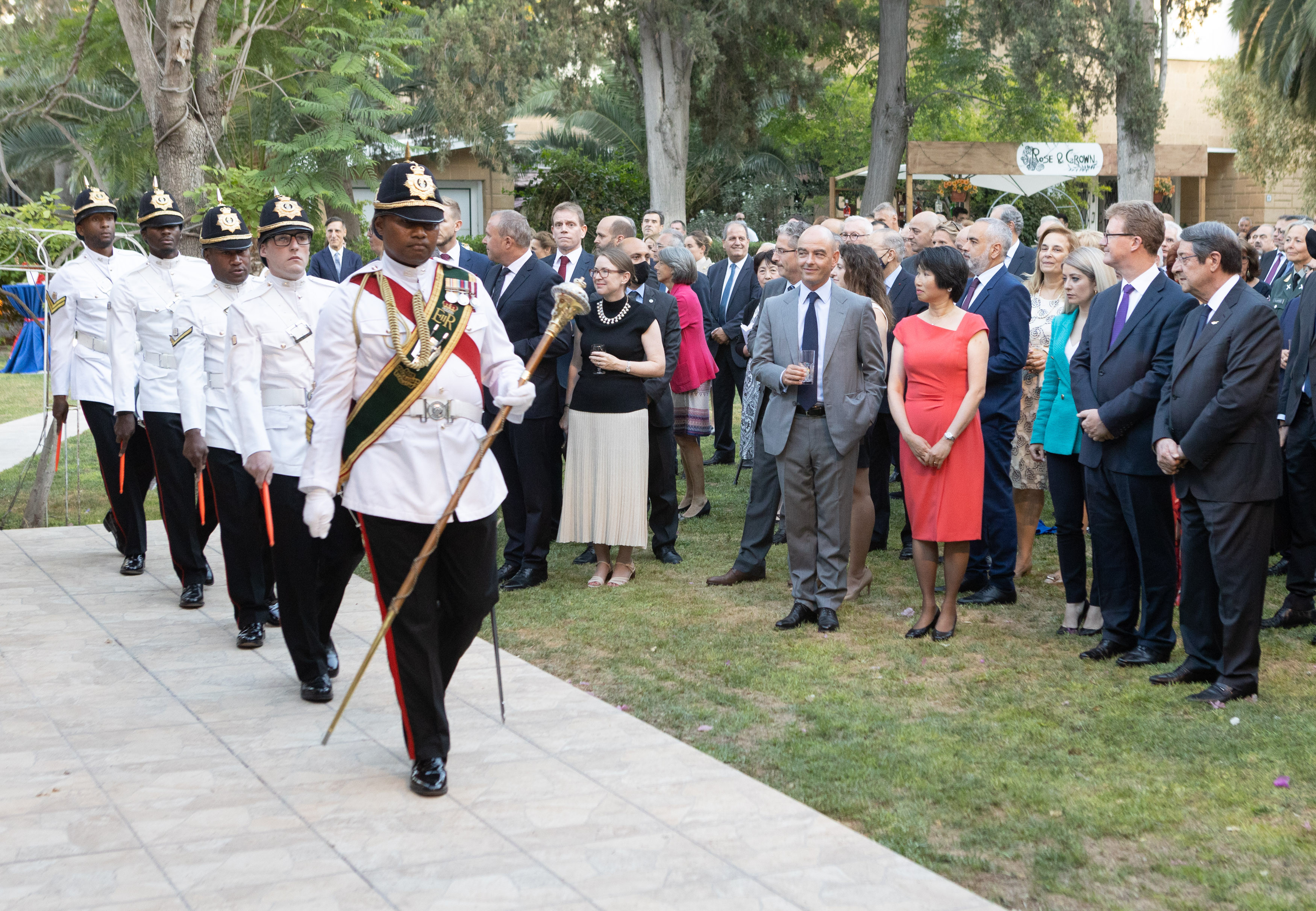 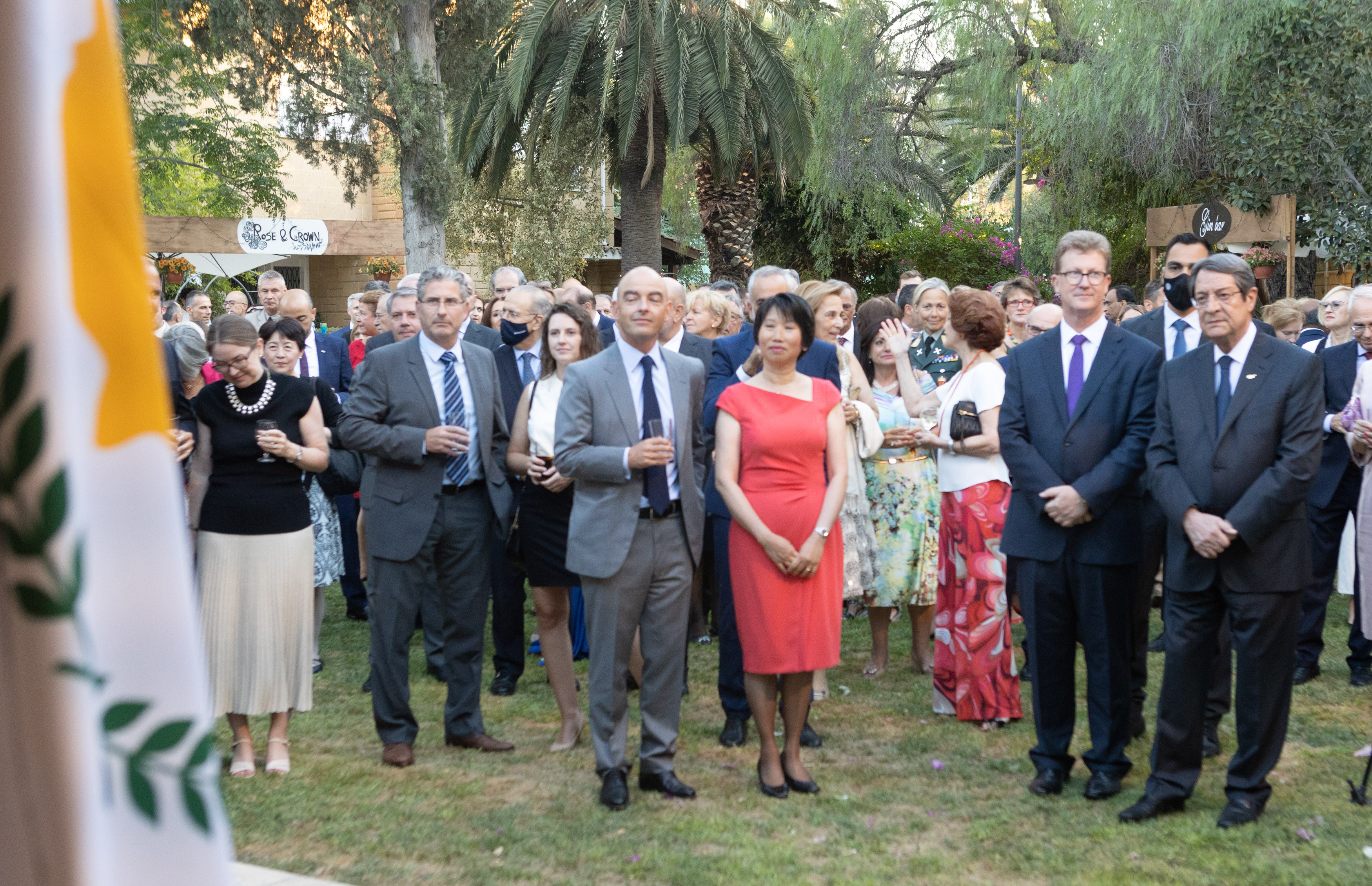 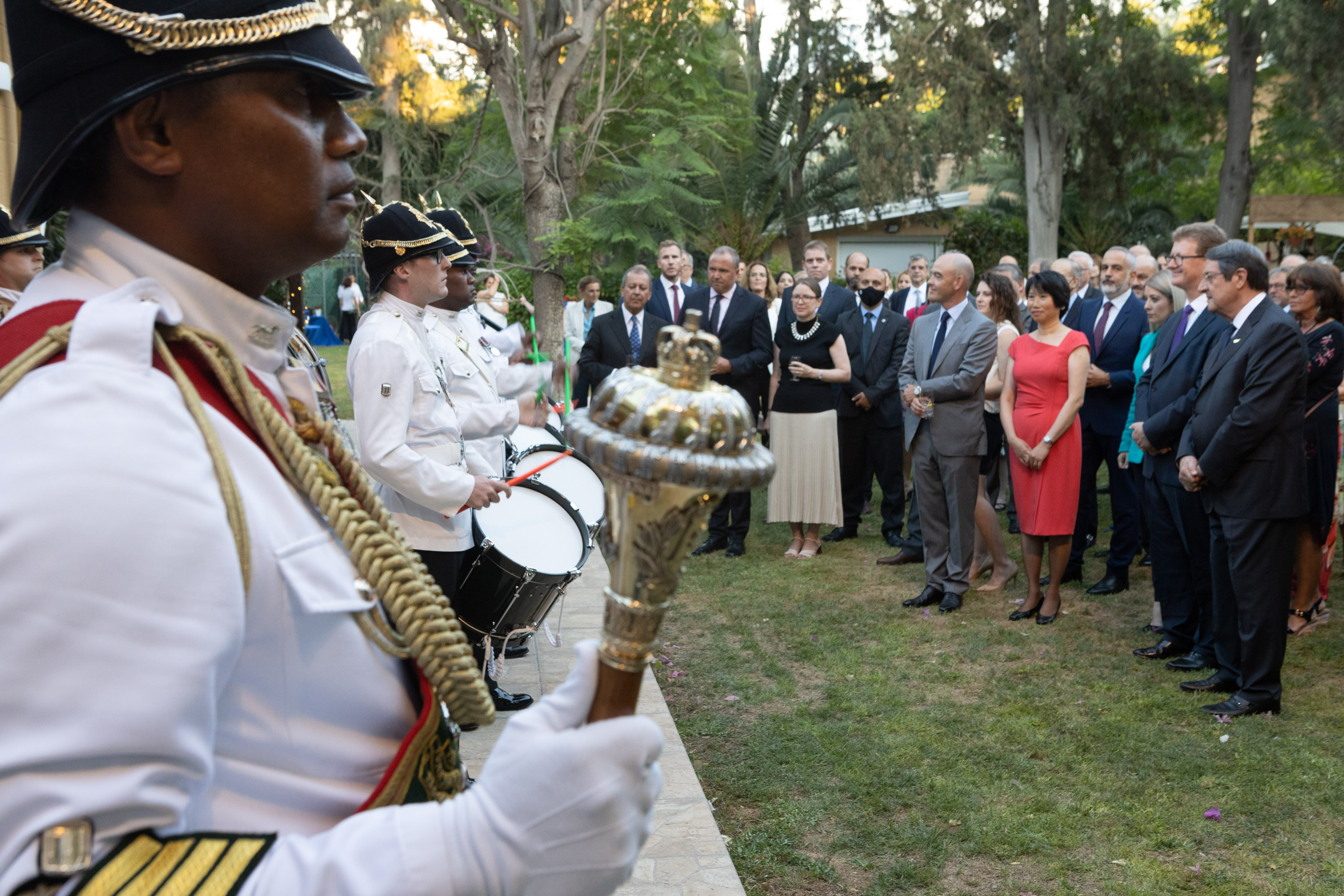 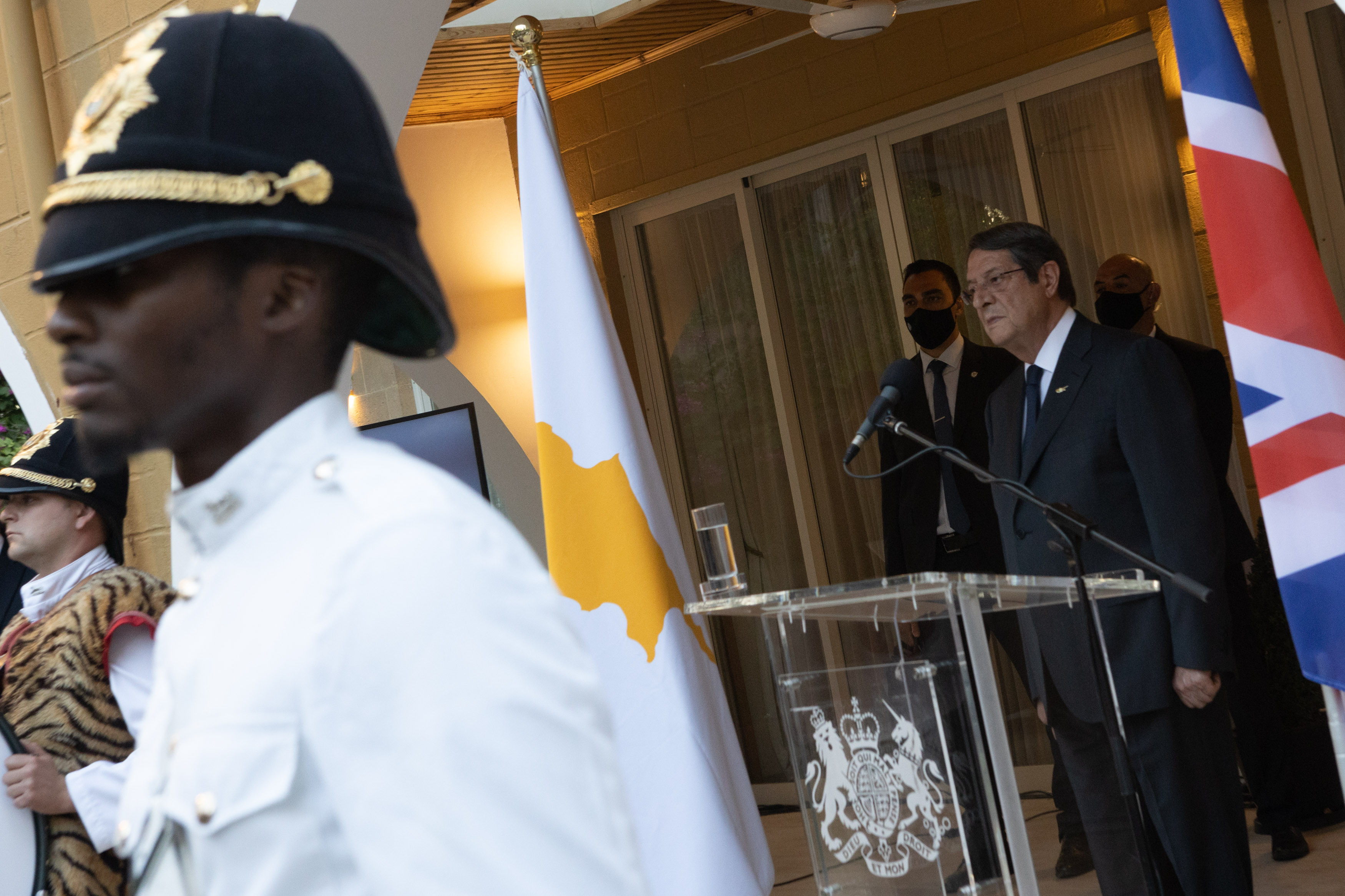 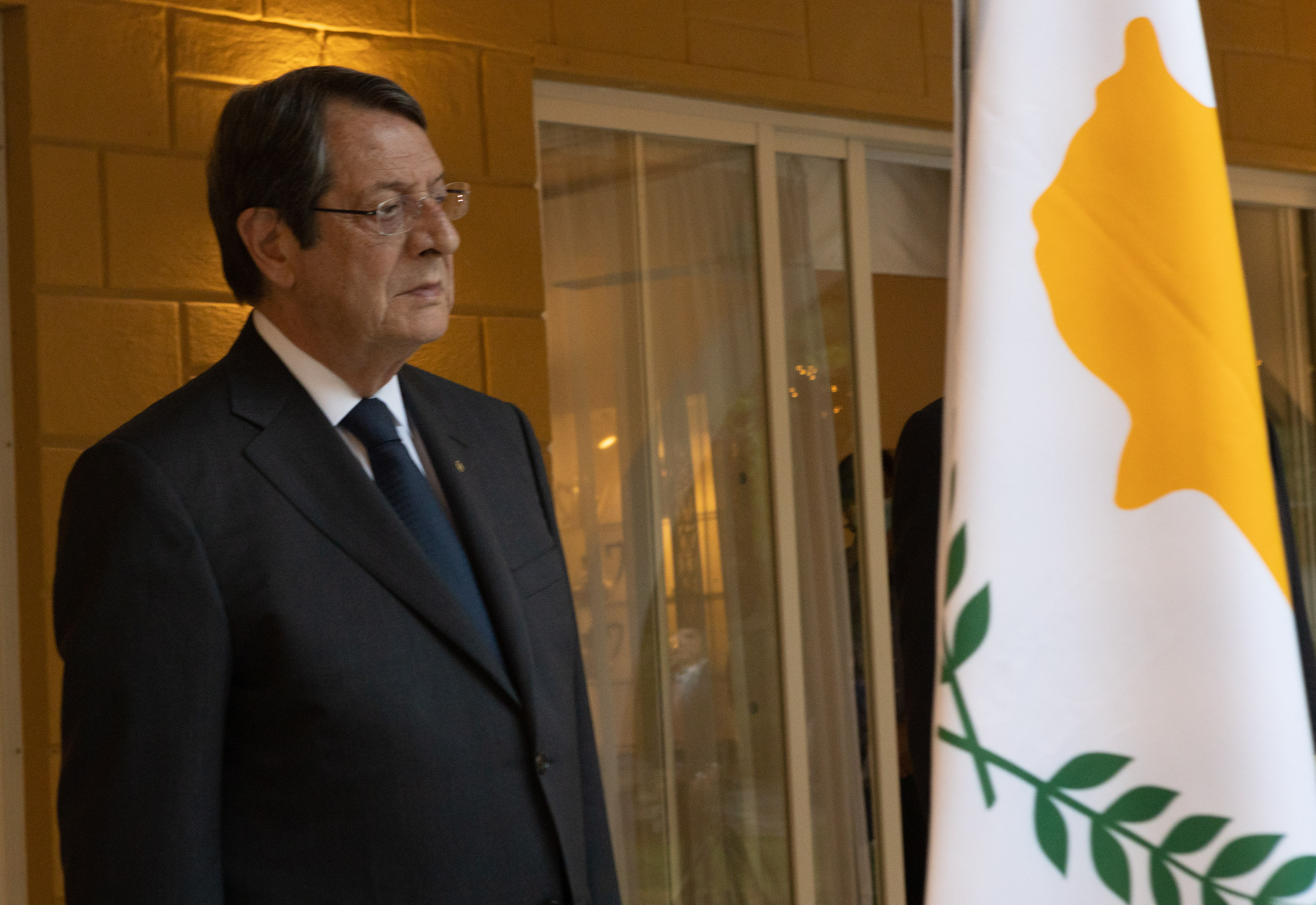 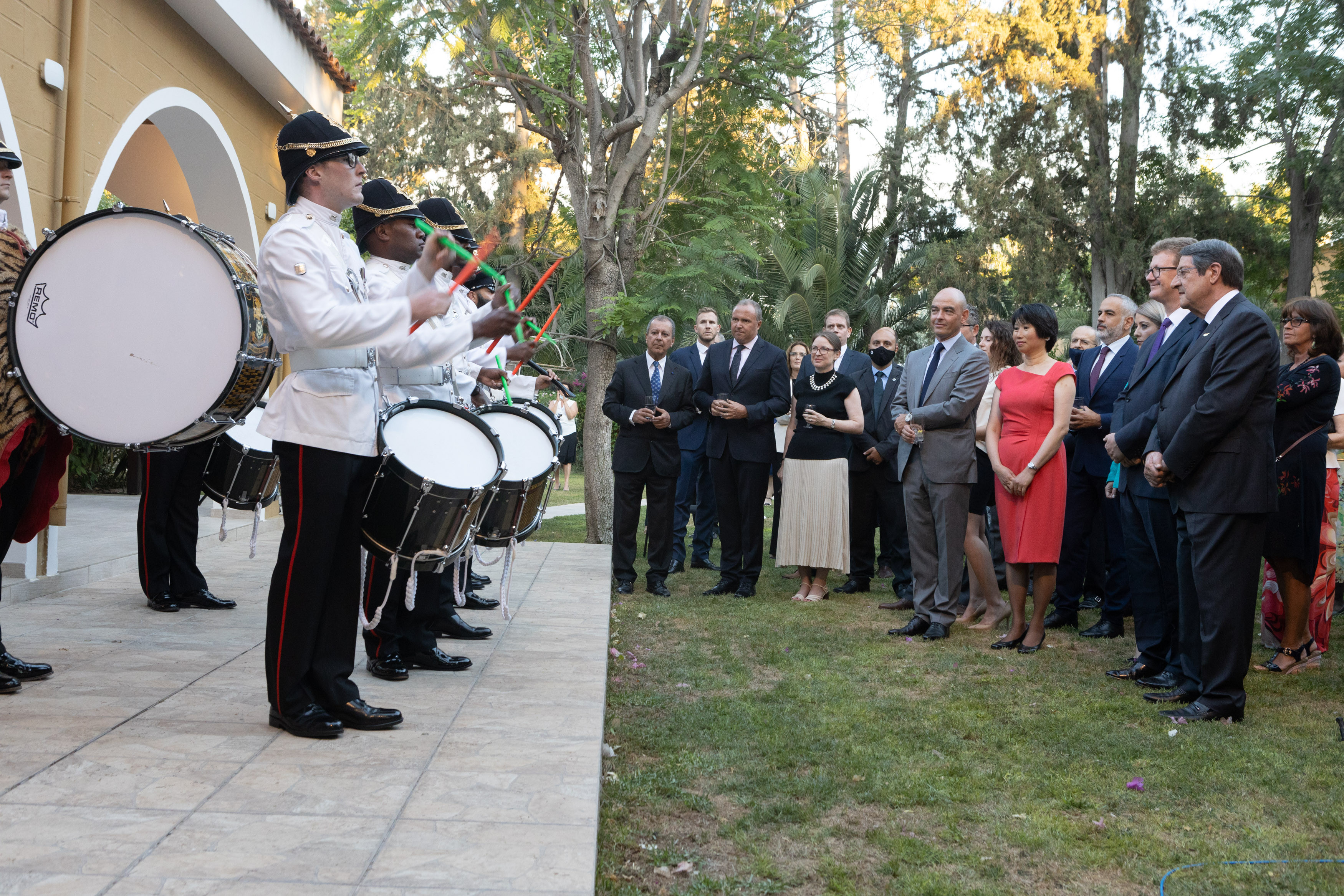 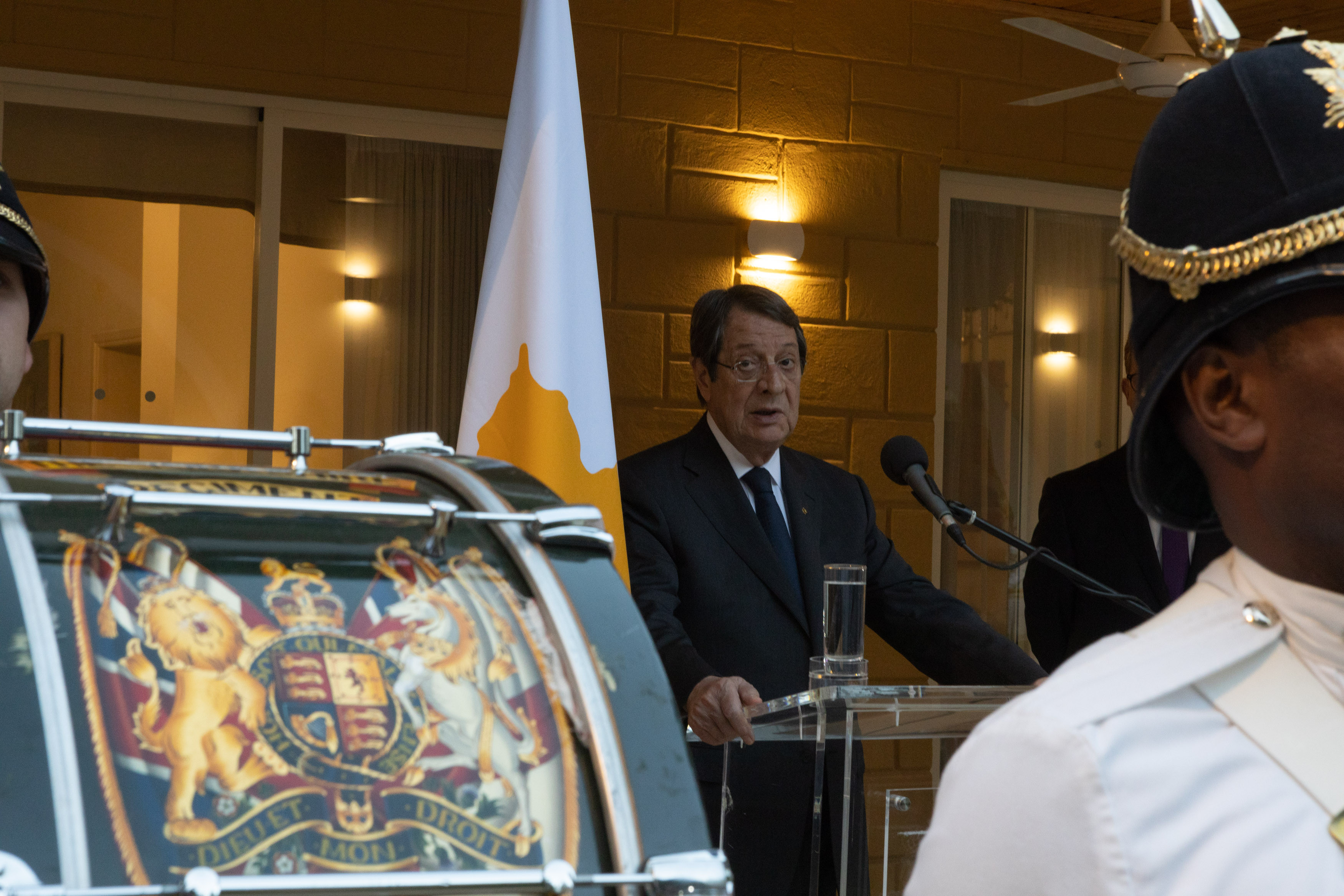 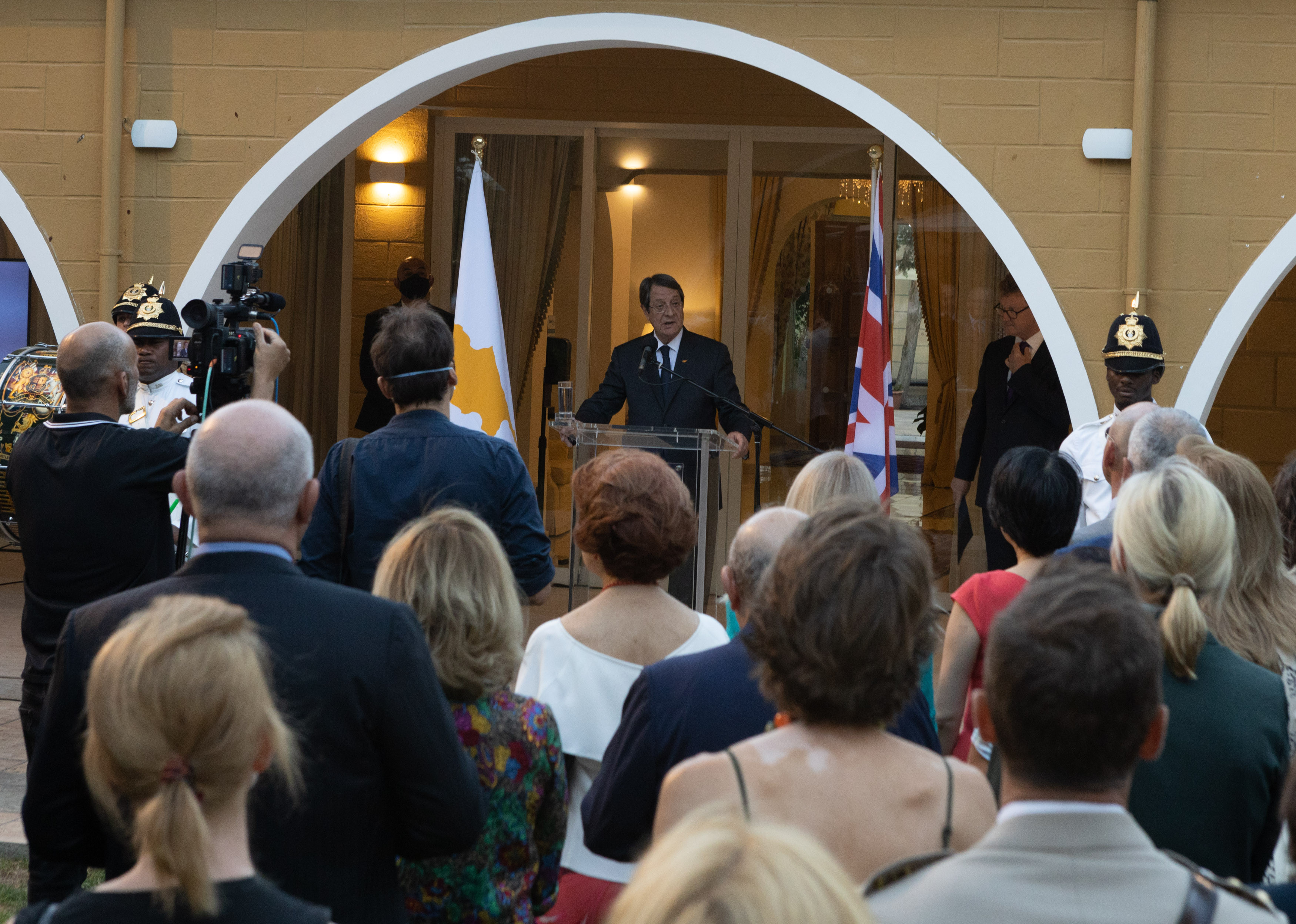 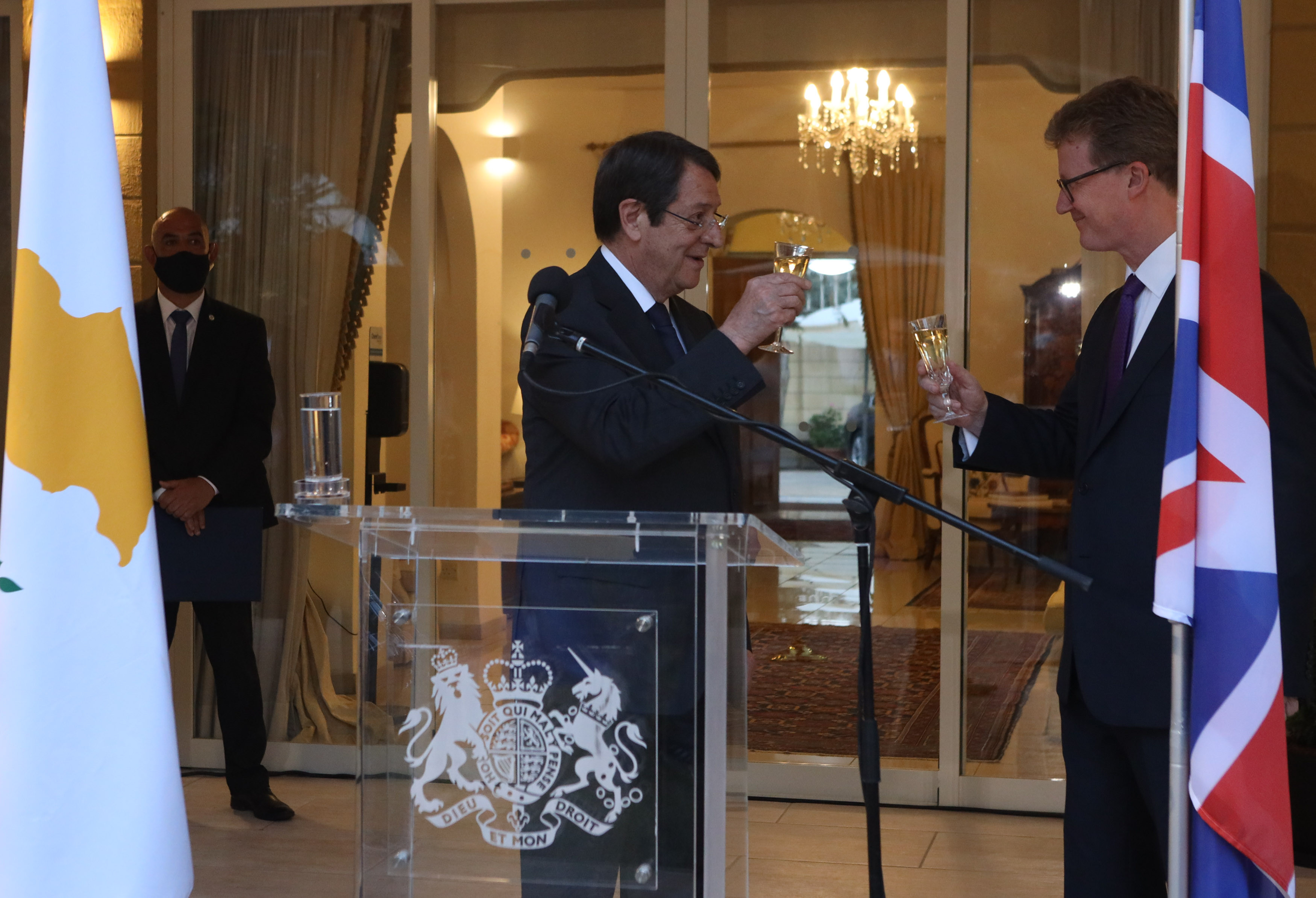 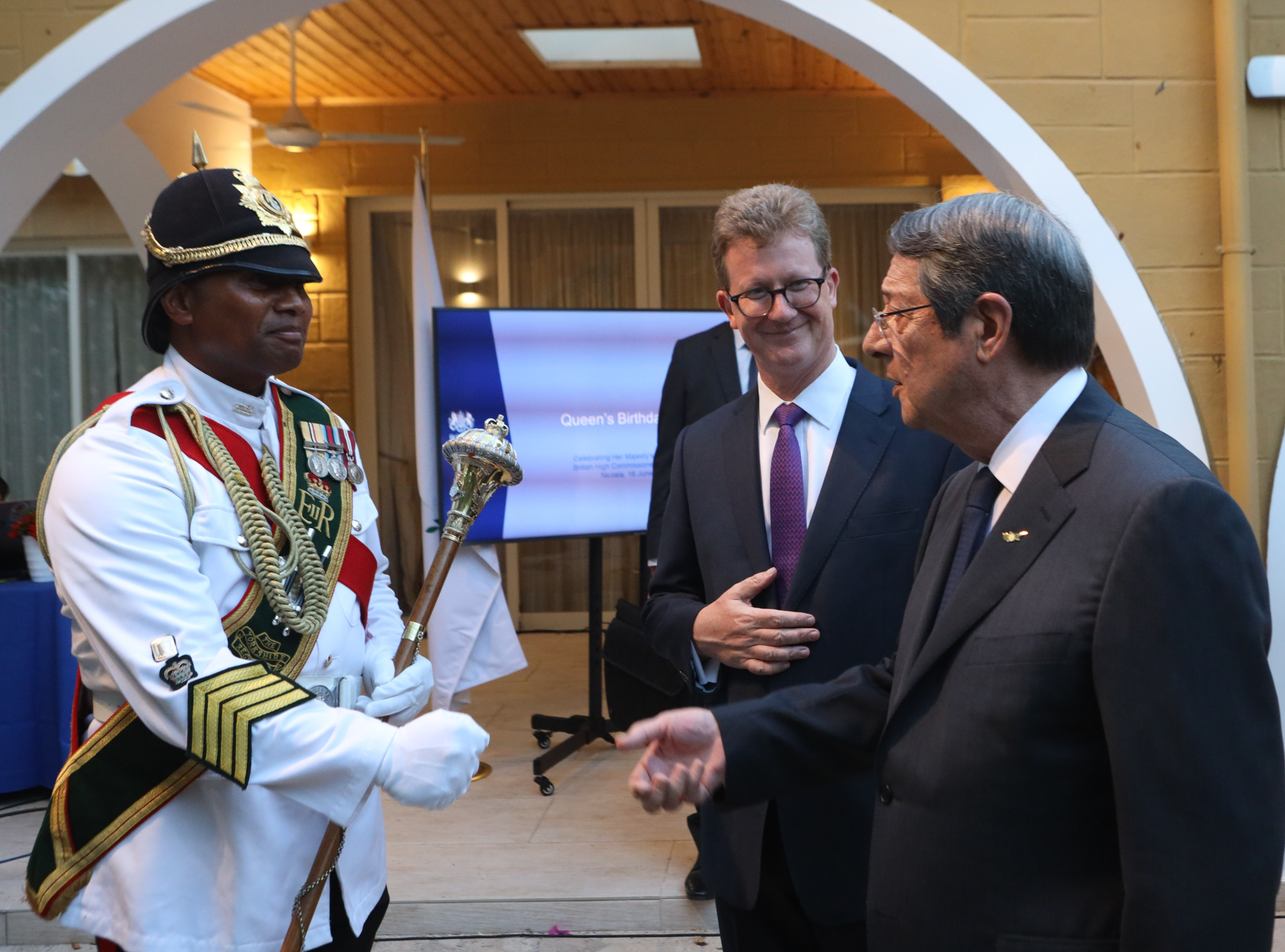 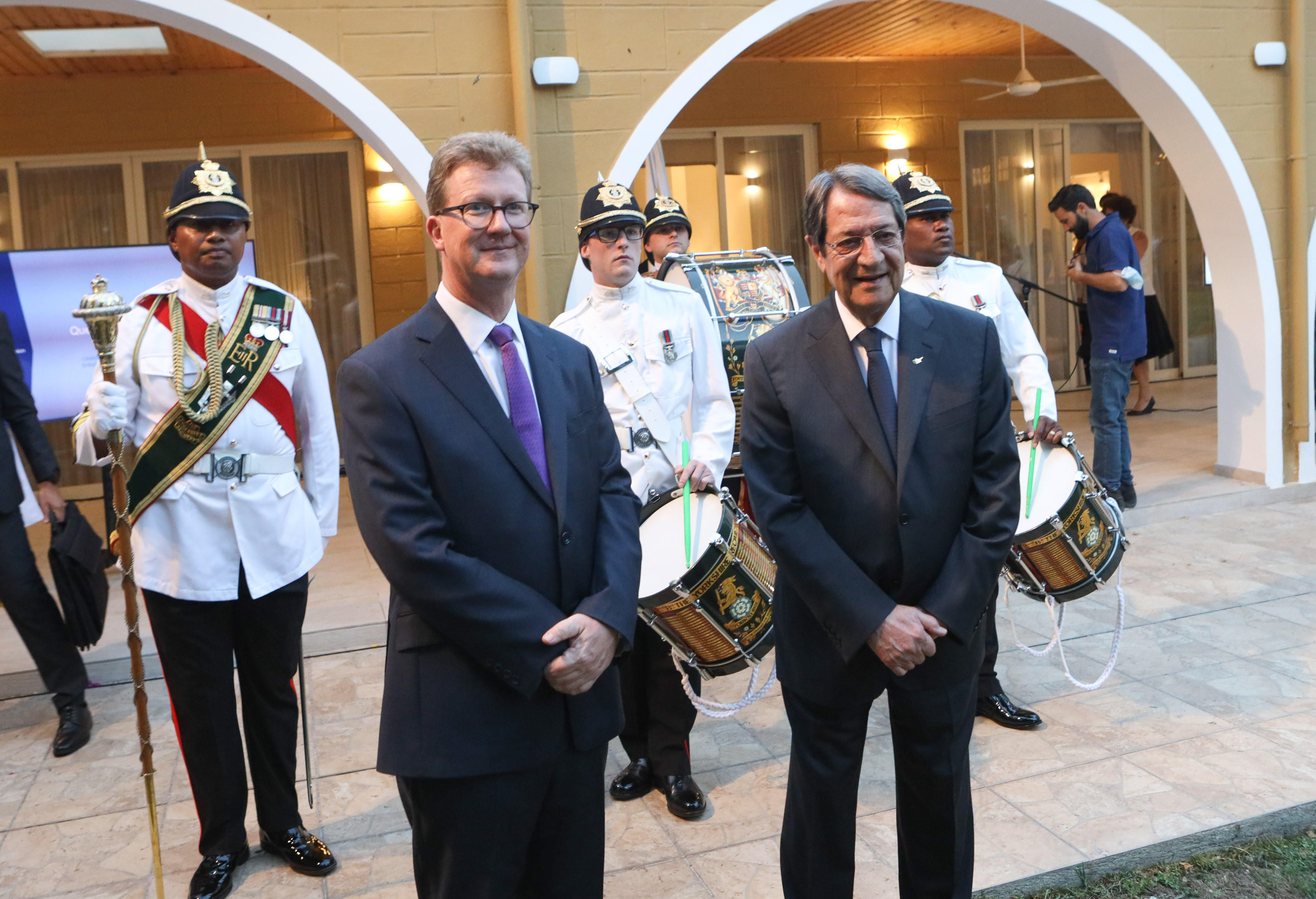 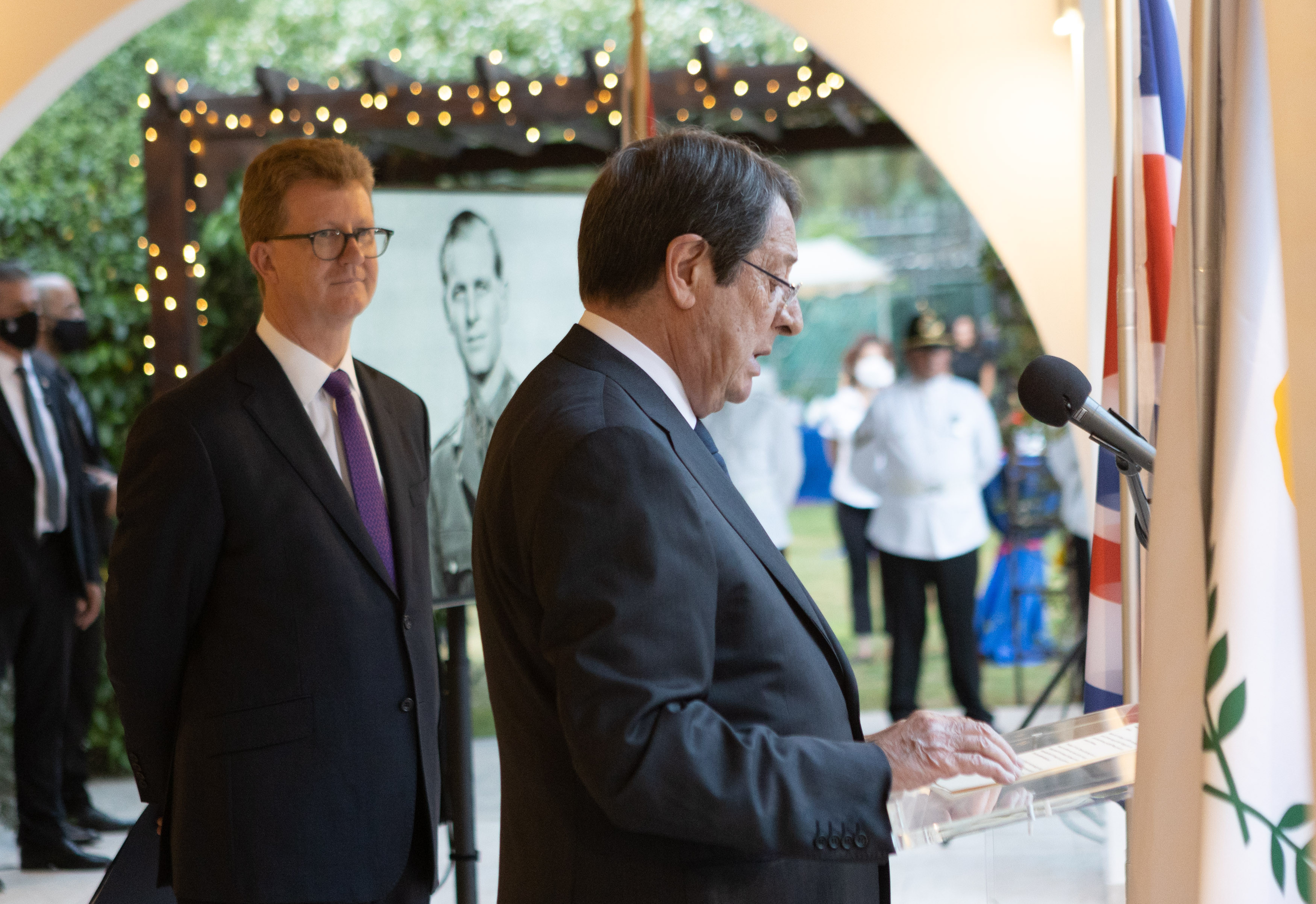 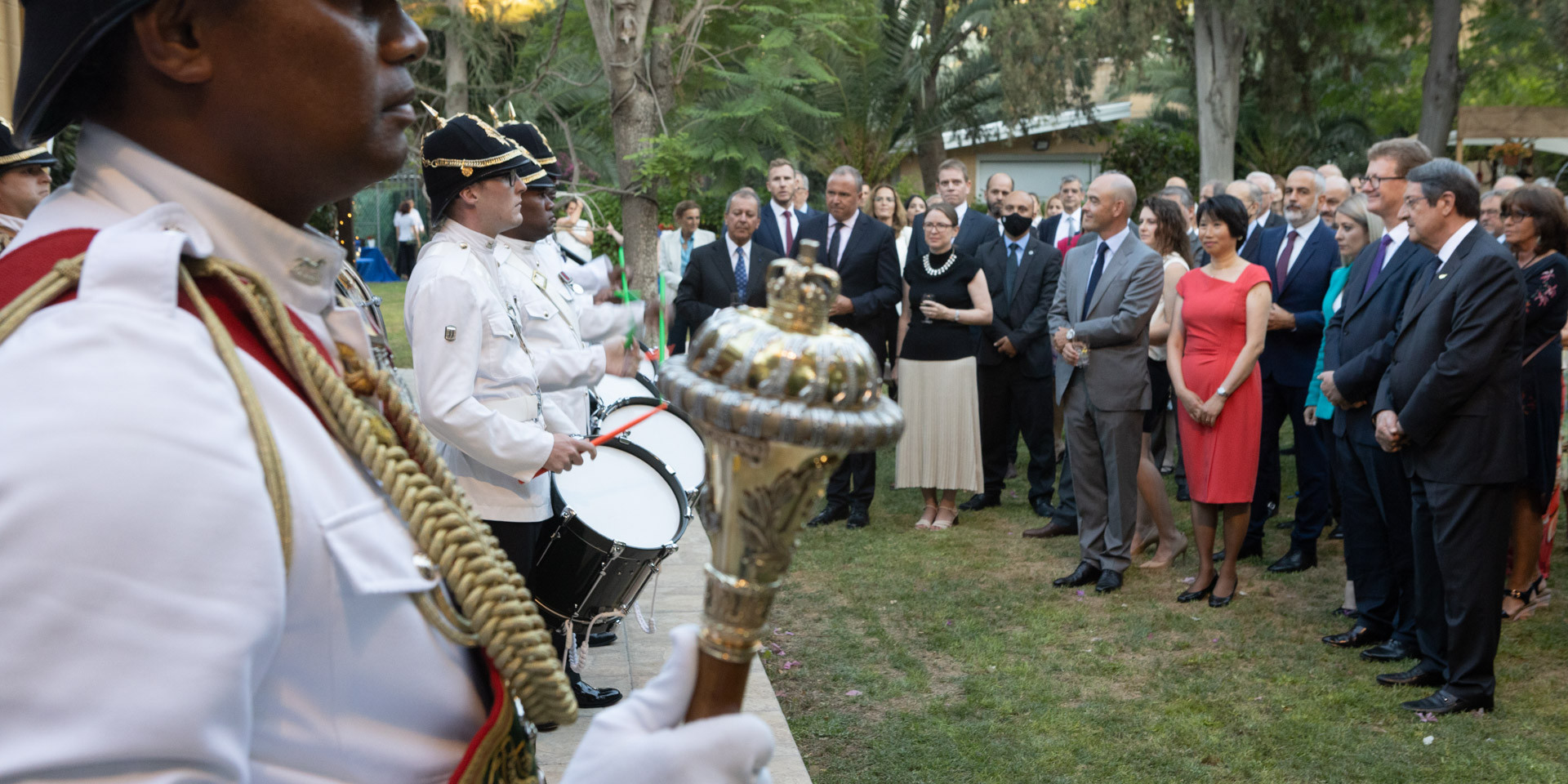 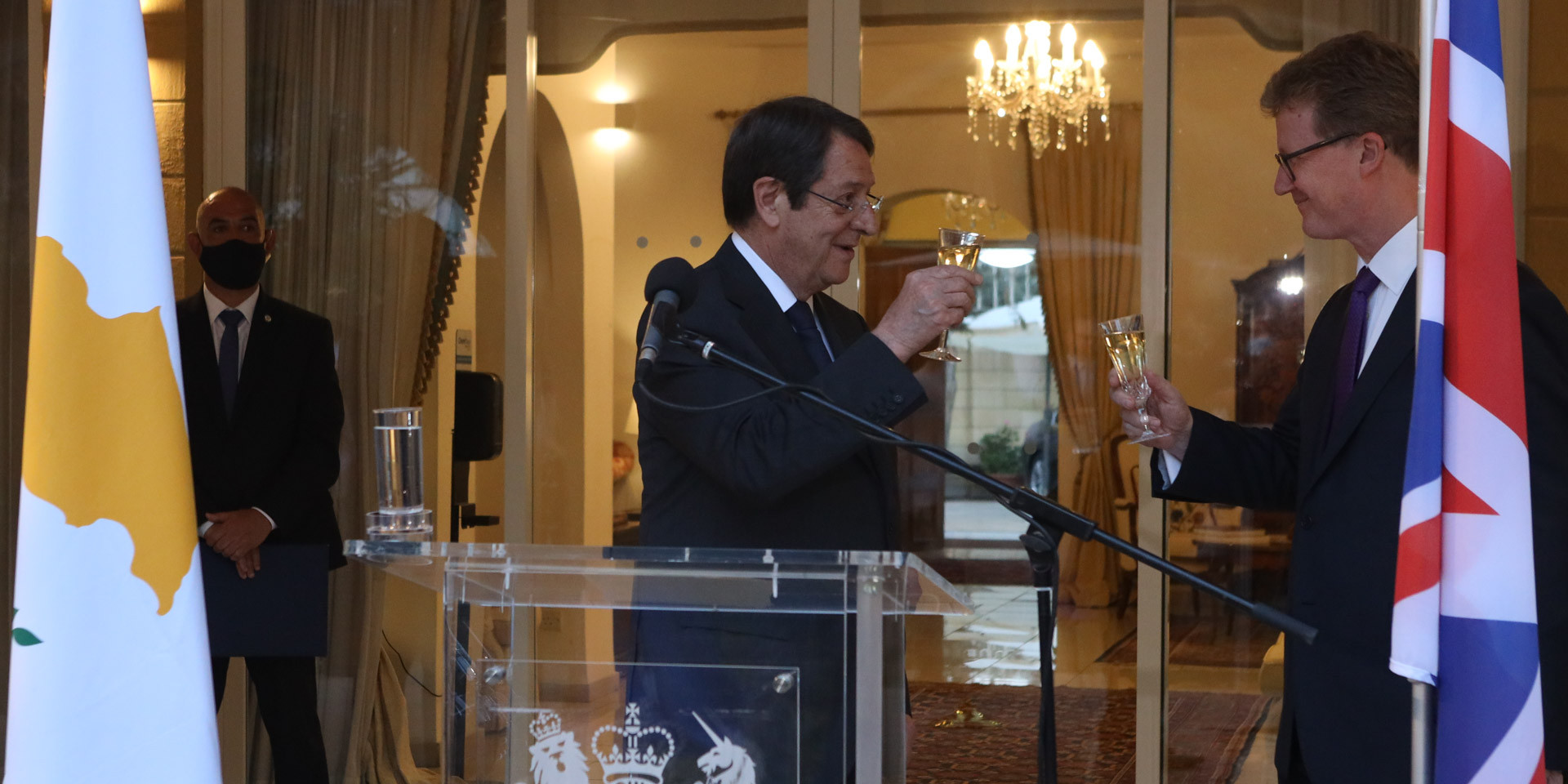 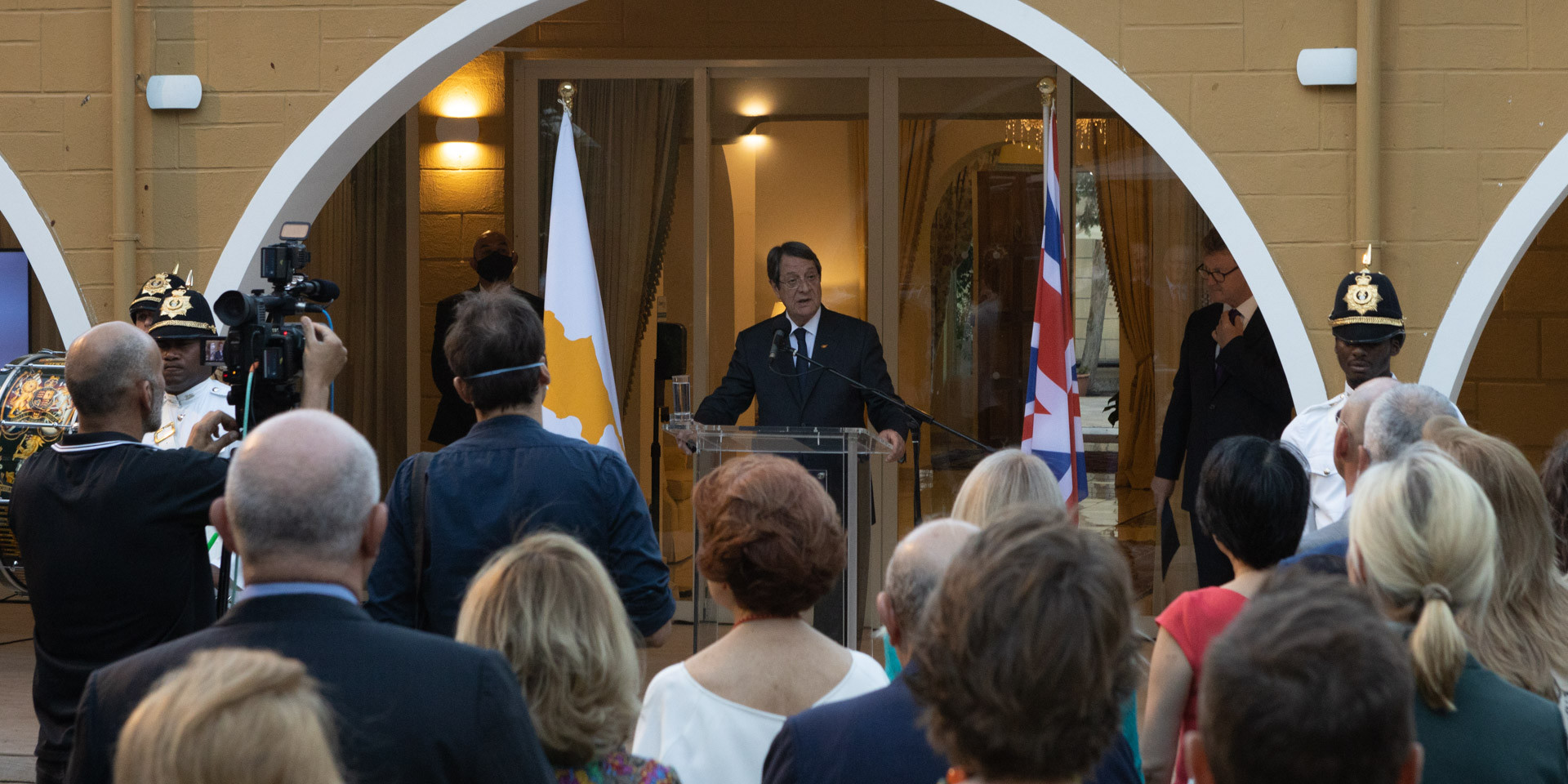 It is with great pleasure that I join you all this evening in celebrating the 95th Birthday of Her Majesty Queen Elizabeth the Second.

A birthday which, unfortunately, she will not enjoy with her beloved husband, His Royal Highness Prince Philip, the Duke of Edinburgh, who lived an extraordinary life and spent such a long career devoted to public service.

Today’s celebration of Her Majesty’s Birthday, provides as with the opportunity to reflect on the long-standing friendship and enduring bonds between our two countries and peoples.

In this regard, I fondly recall my visit to London back in 2019, during which I had the honour to be received by Her Majesty and attend a special event hosted by His Royal Highness, The Prince of Wales, celebrating the historical ties between our countries and the accomplishments of the Cypriot diaspora in the United Kingdom.

After the United Kingdom left the European Union, we have entered a new period in the modern history of our relations, in which we are called to readjust our institutional base of co-operation in a vast array of fields, stretching from education, technology, trade, businesses interactions, investments to security and defence.

Taking this opportunity, I wish to convey in the strongest manner that my Government and I, remain committed to building upon our dynamic and constantly growing relations in new areas of collaboration, based on our established synergies at the bilateral and international level, including as partners in the Commonwealth.

To this end, people-to-people contacts constitute a dynamic aspect for the further enhancement of our ties.

More than 300.000 Cypriots live permanently in the United Kingdom, being the largest Cypriot community overseas, many of whom have received honours from Her Majesty Queen Elizabeth the Second for their services in education, arts, culture, sciences and business.

Likewise, more than 70.000 Britons permanently reside in Cyprus and, before the pandemic, nearly one million Britons chose our island as their preferred tourist destination.

In this respect, I do hope that, also taking into account the positive epidemiological data in Cyprus, the United Kingdom will upgrade Cyprus from the orange to the green category in its next review.

As regards the Cyprus Problem, it is needless to say that the role of the United Kingdom - both as a result of its capacity as a contracting party to the Treaty of Establishment and the Treaty of Guarantee, as well as a Permanent Member of the Security Council - is of critical importance.

It is critical as regards the external dimensions of the settlement and also - as it is prescribed in the framework of UN Secretary-General Guterres - to put an end to the Treaty of Guarantee and establish robust implementation and security mechanisms, with an active role of the Permanent Members of the UN Security Council, for the smooth implementation of the settlement.

The role of the United Kingdom is equally vital in ensuring that all parties remain committed to the UN Security Council Resolutions, which have established that the final settlement of the Cyprus Problem should be based on a bizonal, bicommunal federation with political equality, set out in the relevant Resolutions.

Resolutions which clearly prescribe the range and limits of political equality, which is not open to unilateral interpretations or to any notions which would lead to political inequality or even to any newly-coined terms such as sovereign equality.

The United Kingdom can also be instrumental in ensuring that neither side should insist on setting pre-conditions in resuming the negotiating process which run contrary to the envisioned form of settlement as already described.

Additionally, the role of the UK is critical in impressing upon Turkey the absolute necessity for having an environment conducive for productive negotiations.

Having said these, I do hope that Turkey would not move forward with its illegal actions as regards our Exclusive Economic Zone or the violation of the status of Varosha or the further militarization of Cyprus, since any such acts would prove gravely detrimental to resuming the negotiating process.

Pertinent to the above, I strongly believe that a game changer as regards defusing tensions and addressing concerns of both sides would be to adopt the bold Confidence Building Measures I submitted.

Measures which can address in an equitable and legally robust manner all the issues related with Varosha, including its port, the airport at the occupied areas, the Additional Protocol, as well as the exploitation of hydrocarbons.

The adoption of the said CBMs would also greatly help us in resuming the substantive peace process and aim at reaching a strategic agreement on the six elements of the framework of the UN Secretary-General, always in full respect of the Joint Declaration of 2014 and the convergences reached thus far.

Before concluding, and bearing in mind the possibility of holding another informal meeting on Cyprus within the coming months, with the objective to move in the direction of reaching common ground, my unwavering position is that the only way forward is the resumption of the negotiating process within the UN parameters.

To this end, I genuinely believe that if the proposals we submitted in Geneva, including on CBMs, are to be discussed in good faith, then an agreement could be within reach.

I do hope and I ask all Your Excellencies present to convey the need for the Turkish Cypriot side and Turkey to engage constructively and with good will, so as to reach common ground that would allow the resumption of formal negotiations.

But, most importantly, to realize that a settlement within the UN framework, which will safeguard the human rights of all Cypriots, Greek and Turkish, will have a catalytic effect in improving the relationship between Cyprus and Turkey and consequently between the EU and Turkey and will also significantly contribute to our collective efforts for achieving lasting stability and peace in our immediate neighbourhood.

I wish to assure that I will continue my tireless efforts to engage in a productive dialogue, with the only aim being to address the legitimate concerns of both communities, so as to establish a functional European state which will ensure the common and prosperous future for the coming generations of Greek and Turkish Cypriots, in conditions of peaceful co-existence and collaboration.

In closing, I wish to sincerely thank High Commissioner and Ms. Lillie for the invitation to join your celebrations and for the warm hospitality.

I kindly ask you all to raise your glass for a toast to the health and happiness of Her Majesty Queen Elizabeth the Second, to the progress and prosperity of the people of the United Kingdom and to the strong friendship between our two countries.

Photo Album - PoR – Meeting with the King of Jordan