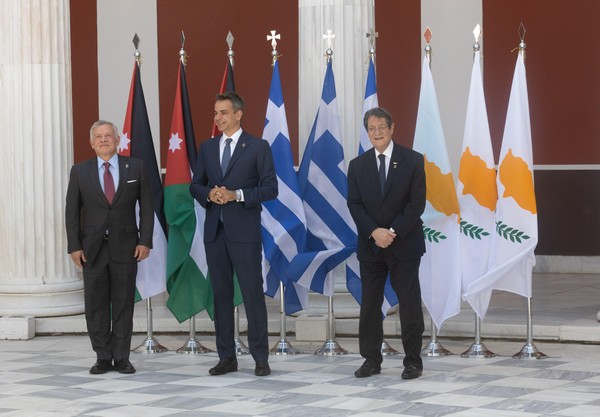 We, Kyriakos Mitsotakis, Prime Minister of the Hellenic Republic, Abdullah II ibn Al Hussein, King of the Hashemite Kingdom of Jordan, and Nicos Anastasiades, President of the Republic of Cyprus met in Athens on 28 of July 2021, to enhance the effective partnership within the framework of the tripartite coordination mechanism amongthe three countries, strengthen cooperation and advance coordination in the political, economic and security fields, as well as in other areas of shared interest in a fragile, post-Covid era.

The Leaders reviewed the significant progress achieved throughout the partnership over the course of the previous trilateral summits and ministerial meetings and agreed to explore further ways to build on and advance their outcomes. In this framework, they highlighted the importance of the permanent secretariat established in Nicosia and its key role in the facilitation of cooperation among the three countries.

Acknowledging the disruptive impact of the Covid-19 pandemic on the global economy and by extension, on the economic cooperation among the three countries, and recognizing the importance of increased global solidarity in order to mitigate the already aggravating parameters of global uncertainty, Greece and Cyprus reiterated His Majesty King Abdullah II ibn Al-Hussein’s call for “re-globalization”, to bring together global skills, resources and initiatives under a revisited, inclusive, growth-oriented perspective, thus forging cohesive, sustainable ties and enhancing the positive linkages among countries, towards prosperity for all.

In this context, the Leaders expressed their shared keenness on promoting and supporting existent synergies in all economic sectors and actively encourage new endeavors, building upon the dynamics of the countries’ digital transformation, to circumvent the challenges and predicaments that Covid-related restrictions have created.

They also underscored the importance of our geographical proximity and rich cultural heritage, offering a vast potential to improve cooperation in key priority areas, including culture and education, trade, food security, tourism, energy, agriculture, water, environment, healthcare, investment and ICT. They agreed to re-launch sectorial meetings that were halted due to the COVID-19 pandemic, to identify concrete projects, offering their nations ample opportunities to achieve trilateral goals building on our strategic partnership.

Furthermore, the Leaders reiterated their support for a comprehensive, just, and lasting settlement of the Israeli-Palestinian conflict based on the two-State solution, in accordance with international law and relevant UN resolutions ensuring the establishment of an independent and viable Palestinian state on 4 June 1967 lines, with East Jerusalem as its capital, living side by side in peace with Israel, within secure and recognized borders.

Greece and Cyprus reaffirmed their support to the important role of His Majesty King Abdullah II ibn Al Hussein, the Custodian of Islamic and Christian holy sites in Jerusalem, in safeguarding the holy sites and preserving the legal and historic status-quo therein.  In this regard, the important role Jordan played in restoring calm and stopping violations in Jerusalem and the rest of the Occupied Palestinian Territories was highlighted.

The Leaders discussed the Cyprus problem, including the latest developments in Varosha, and the presidential statement of the United Nations Security Council. They stressed support to a just, comprehensive and viable settlement of the Cyprus problem in line with the relevant United Nations Security Council resolutions and international law.  They emphasized that all unilateral measures or acts that are inconsistent with relevant United Nations resolutions and international law, or undermine efforts towards a negotiated peaceful solution must cease. The Leaders underlined the important role of the United Nations Peacekeeping Force in Cyprus (UNFICYP) in safeguarding peace and stability in line with the United Nations’ purposes and principles. They also stressed that a comprehensive settlement of the Cyprus problem will not only benefit the people of Cyprus, but will also significantly contribute to peace and stability of the region.

The Leaders emphasized that a peaceful, stable and prosperous Mediterranean is a strategic priority of the region. They called on all countries of the region to respect the sovereignty, sovereign rights and jurisdiction each State has over its maritime zones in accordance with international law, in particular the Law of the Sea.To this end, the Leaders stressed the importance of engaging in a constructive dialogue and negotiations, in accordance with International Law.

The Leaders reiterated strong commitment to countering the common threat of terrorism and violent extremism, and they agreed to enhance cooperation aiming at consolidating the global efforts, including the key platform, the Aqaba Process initiative, that His Majesty King Abdullah II ibn Al Hussein established, in further addressing various aspects in this regard, by deepening the understanding on the root causes of violent extremism and its underlying factors, and taking into consideration growing challenges such as the misuse of Internet and social media for terrorist purposes.

Moreover, they expressed support to the Government of Iraq and its endeavors to safeguard Iraq’s territorial integrity, security and stability, and to fulfil the aspirations of the Iraqi people towards further prosperity and progress.  The Leaders also stand by Iraq in the process of rebuilding and stabilizing.

On Libya, the Leaders expressed commitment to a political solution that ends the conflict in Libya on the basis of UN Security Council resolutions 2570 and 2571 (2021) and all relevant UN Security Council resolutions, and determination to help restore stability, security and prosperity to Libya. They welcome the political progress achieved through the outcomes of the Libyan Political Dialogue Forum (LPDF) held under the auspices of the UN, and expressed support to the interim Libyan Government in its efforts leading to holding the elections on 24 of December 2021. The Leaders stressed the importance of the complete withdrawal of all foreign forces, fighters and mercenaries as stipulated in the ceasefire agreement that the 5+5 Joint Military Committee declared in Geneva on 23 of October 2020.

Additionally, they expressed their commitment to the unity, sovereignty and territorial integrity of Syria. They emphasized the need for making progress towards achieving a political solution to the conflict in accordance with the United Nations Security Council Resolution 2254 (2015), a political solution that brings peace, stability and security to the Syrian people, and facilitates the safe, voluntary, and dignified return of IDPs and refugees. We also stressed the importance of sustaining international support to countries hosting Syrian refugees to help their efforts in fulfilling the needs of refugees and maintaining the resilience of host communities.

With regard to EU-Jordan relations, the Leaders underlined the importance of Euro-Mediterranean cooperation under the Barcelona process which has recently celebrated its 25th anniversary, and highly valued the role of the Union for the Mediterranean (UfM) in that respect. The UfM under the EU-Jordan co-presidency has gained traction in consolidating coordination and promoting common objectives towards regional prosperity and integrity. In this direction, within the framework of the EU-Jordan Partnership Priorities and of the common security challenges in the area, they reconfirmed the shared interest in the promotion of peace and stability throughout the region, not only via strategic cooperation in foreign and security policy, but also by addressing cross-cutting issues from education to job creation, climate change, mobility, sustainable use of natural resources, and counter-terrorism.

The Leaders underlined the commitments to safeguarding and promoting the rich historical and cultural heritage of the region and the common heritage of mankind. This common goal was underscored in the first Trilateral Summit, that was held in Nicosia in 2018, by signing the Agreement on the Prevention of Theft, Clandestine Excavation and Illicit Import, Export or Transfer of Ownership of Cultural Property and the Promotion of its Restitution. They agreed to work together to raise awareness on the importance of preserving the integrity, authenticity and the outstanding universal value of the region’s cultural heritage sites inscribed on the UNESCO World Heritage list, taking into full account all relevant UNESCO resolutions and decisions.

Discussions, having peace and stability at their core and extended to a wide variety of issues of mutual interest and concern, paved the way for enhanced cooperation and accelerated coordination of initiatives with the aim of tangible progress in all areas until the next Summit. To this end, they expressed their commitment to reactivate partnerships, mobilize resources and aggregate efforts towards sustainable, evolving shared benefits and added value for all three countries participating in this cooperation scheme.

PoR – Summit on Climate Change and its consequences in the Mediterranean