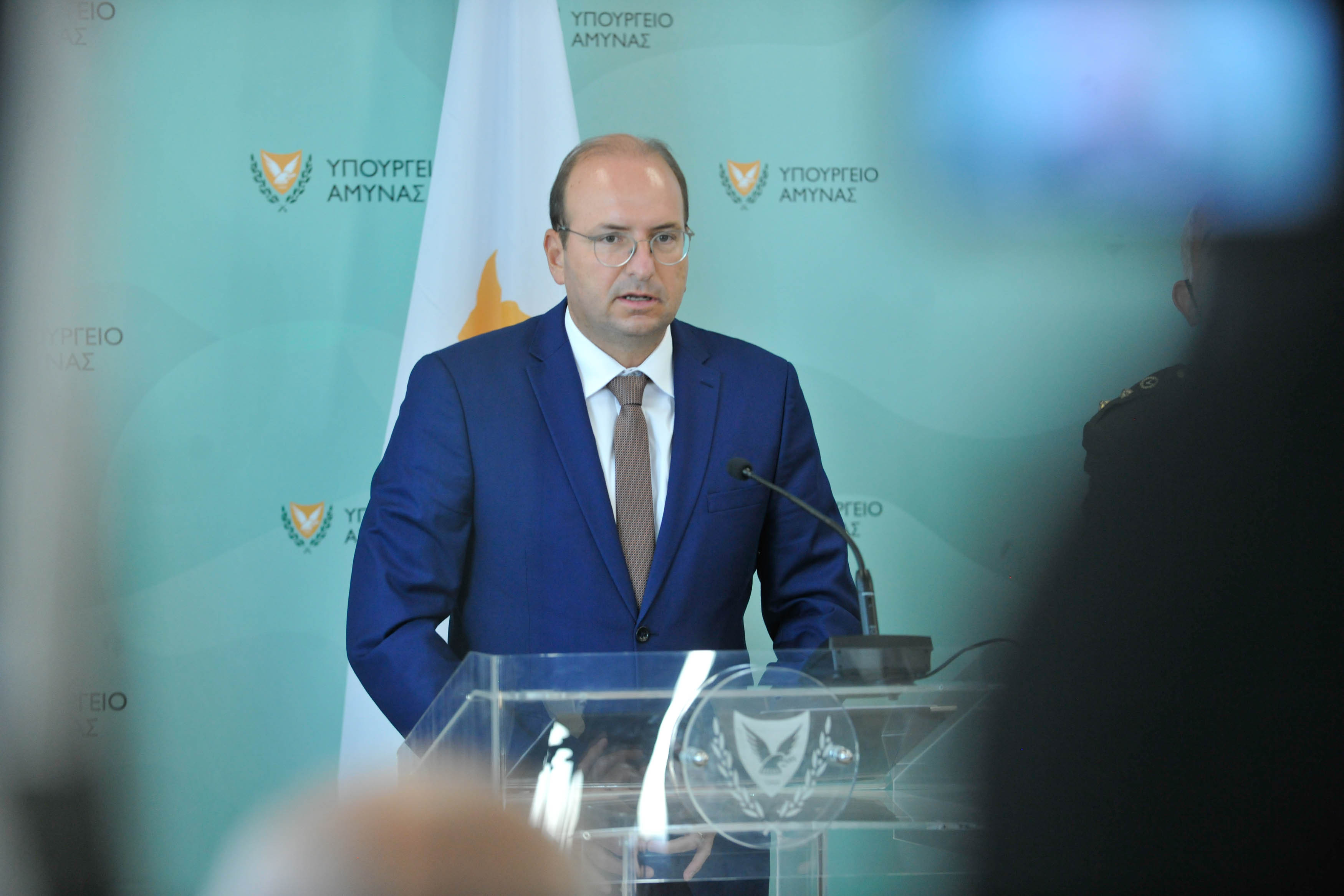 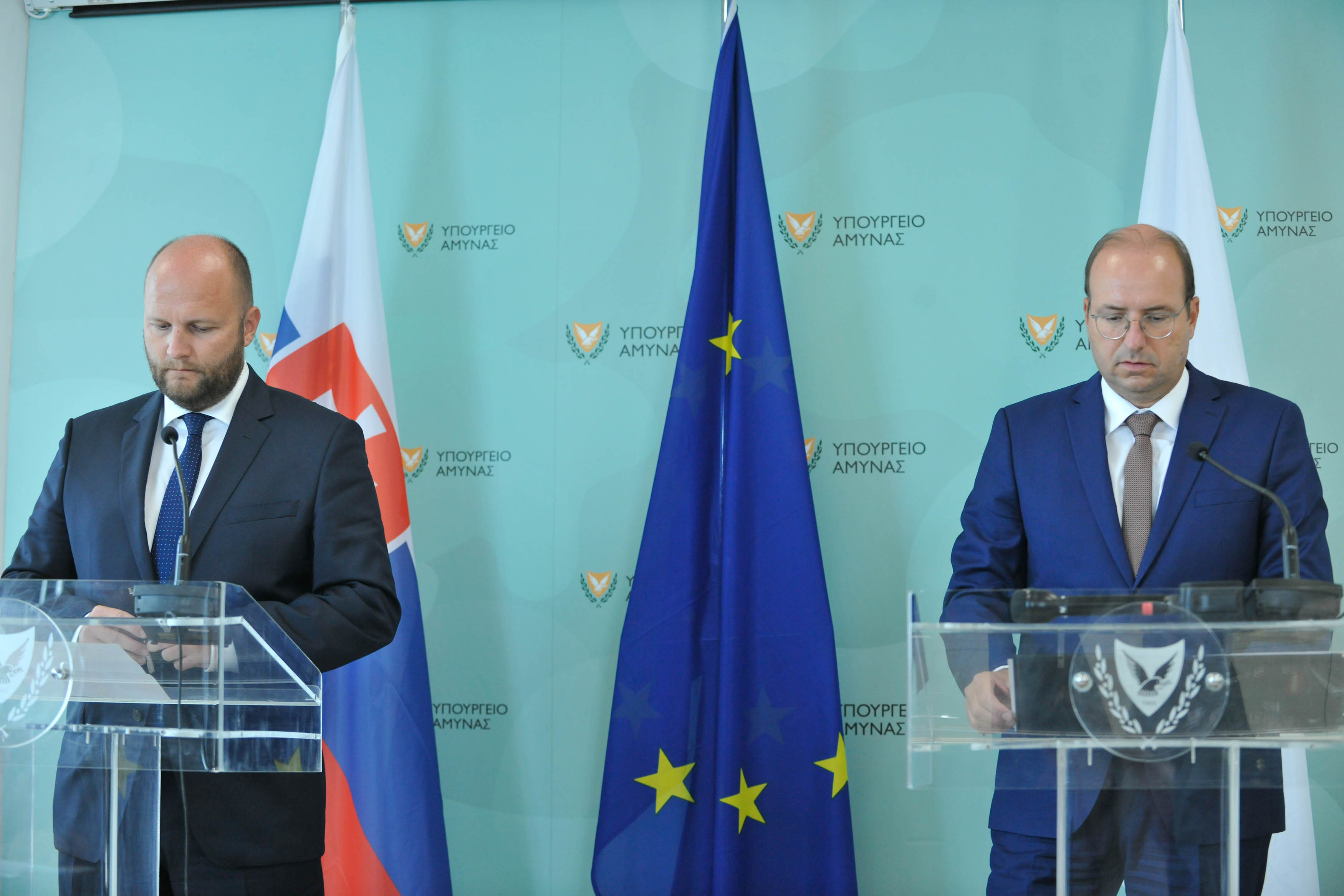 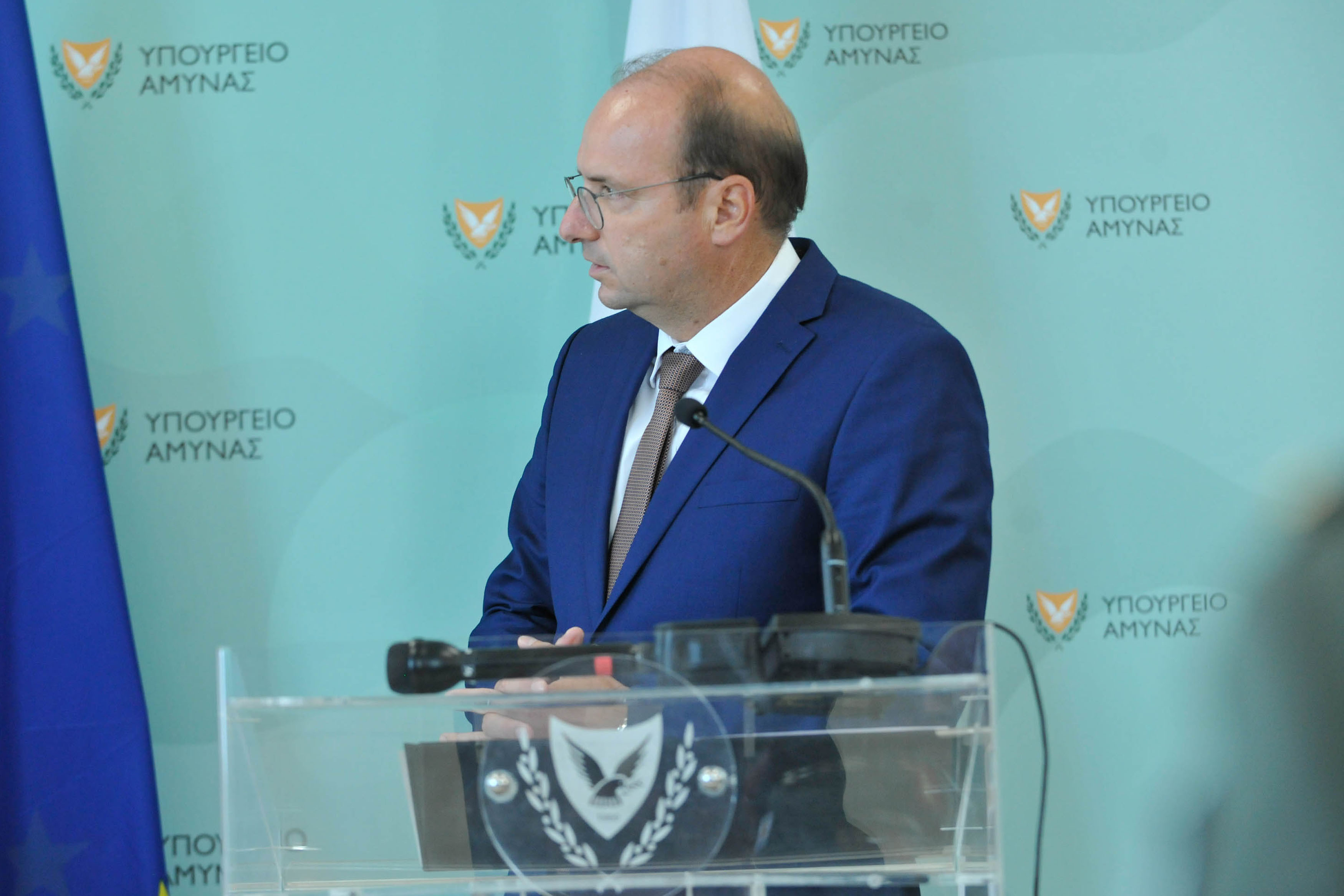 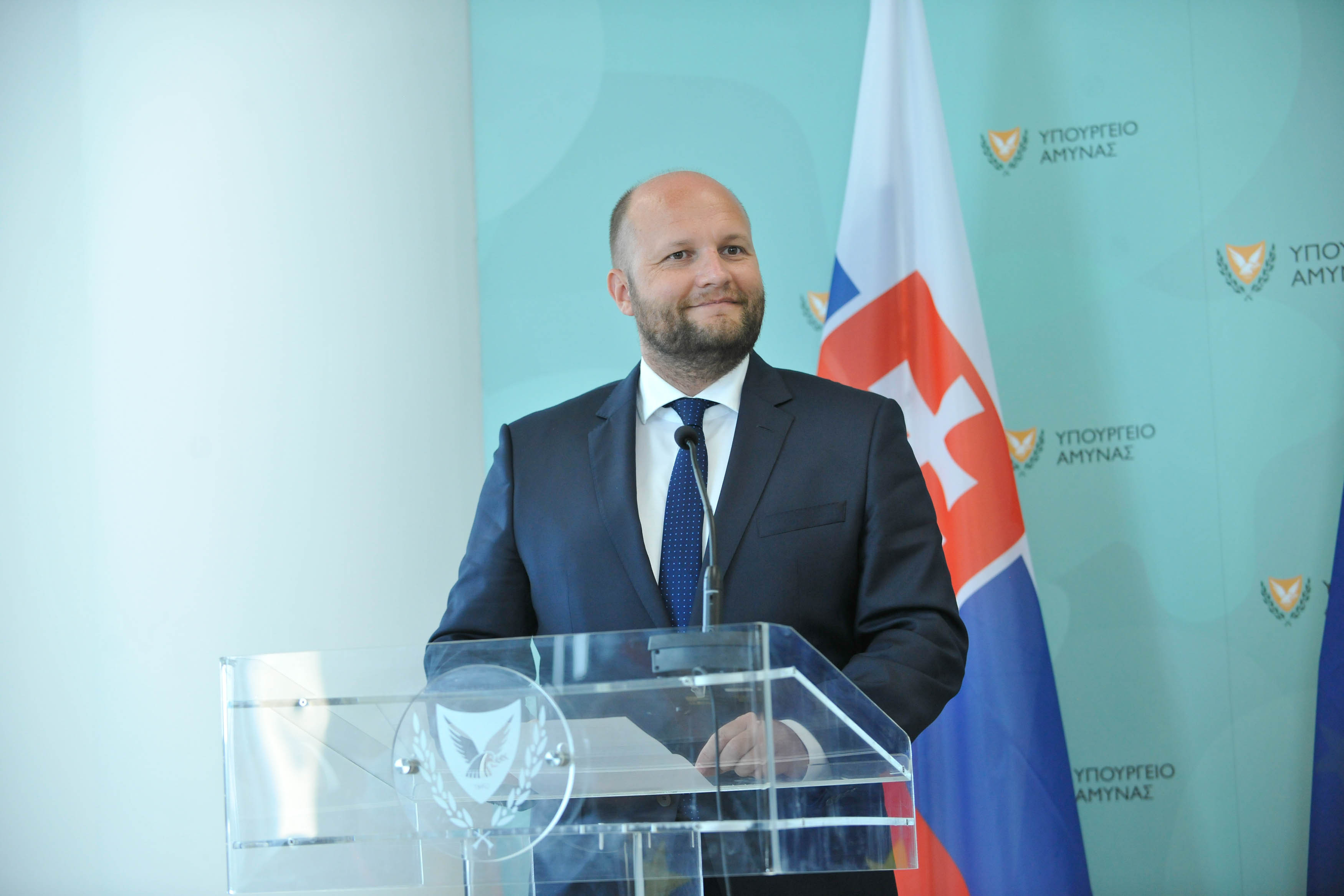 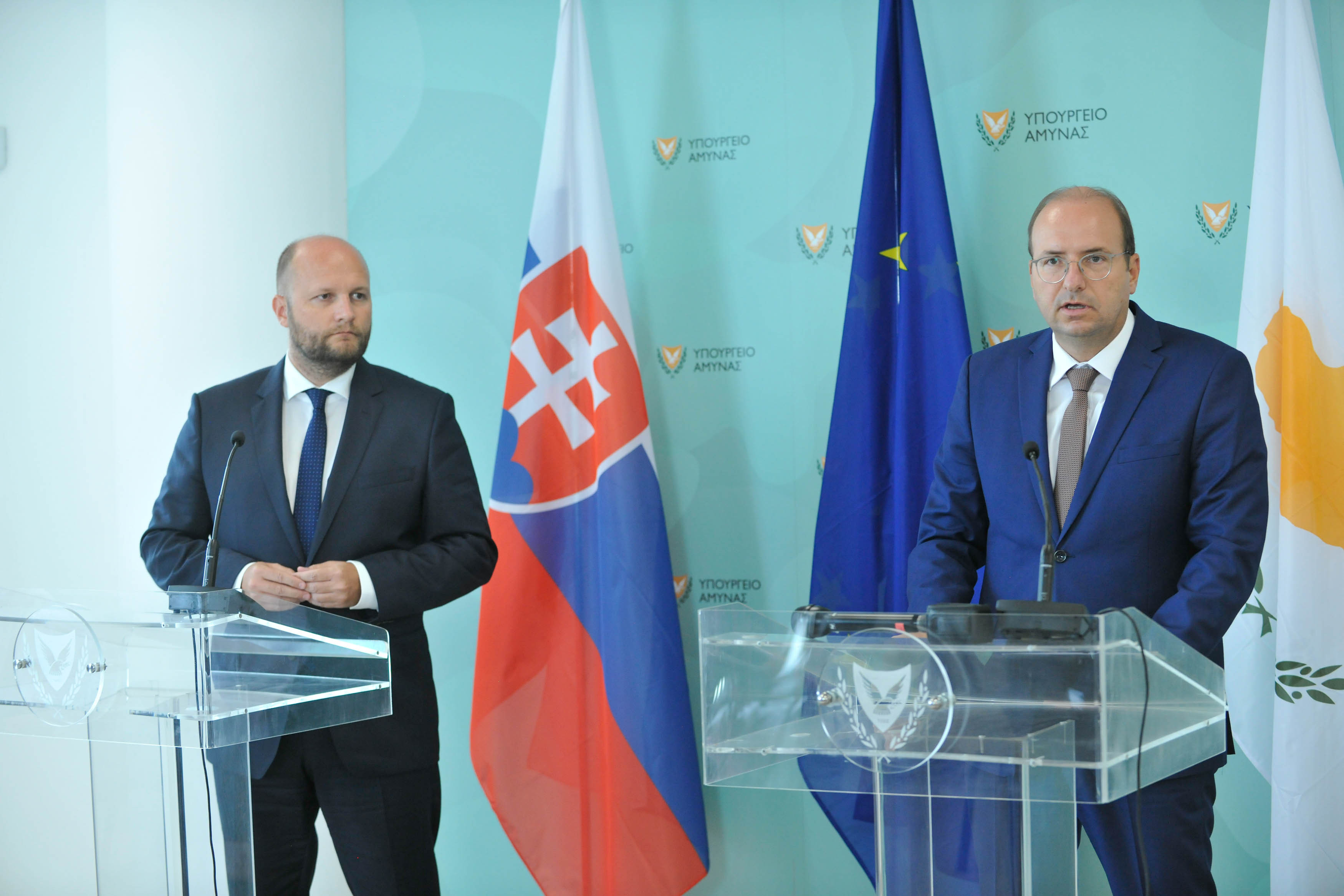 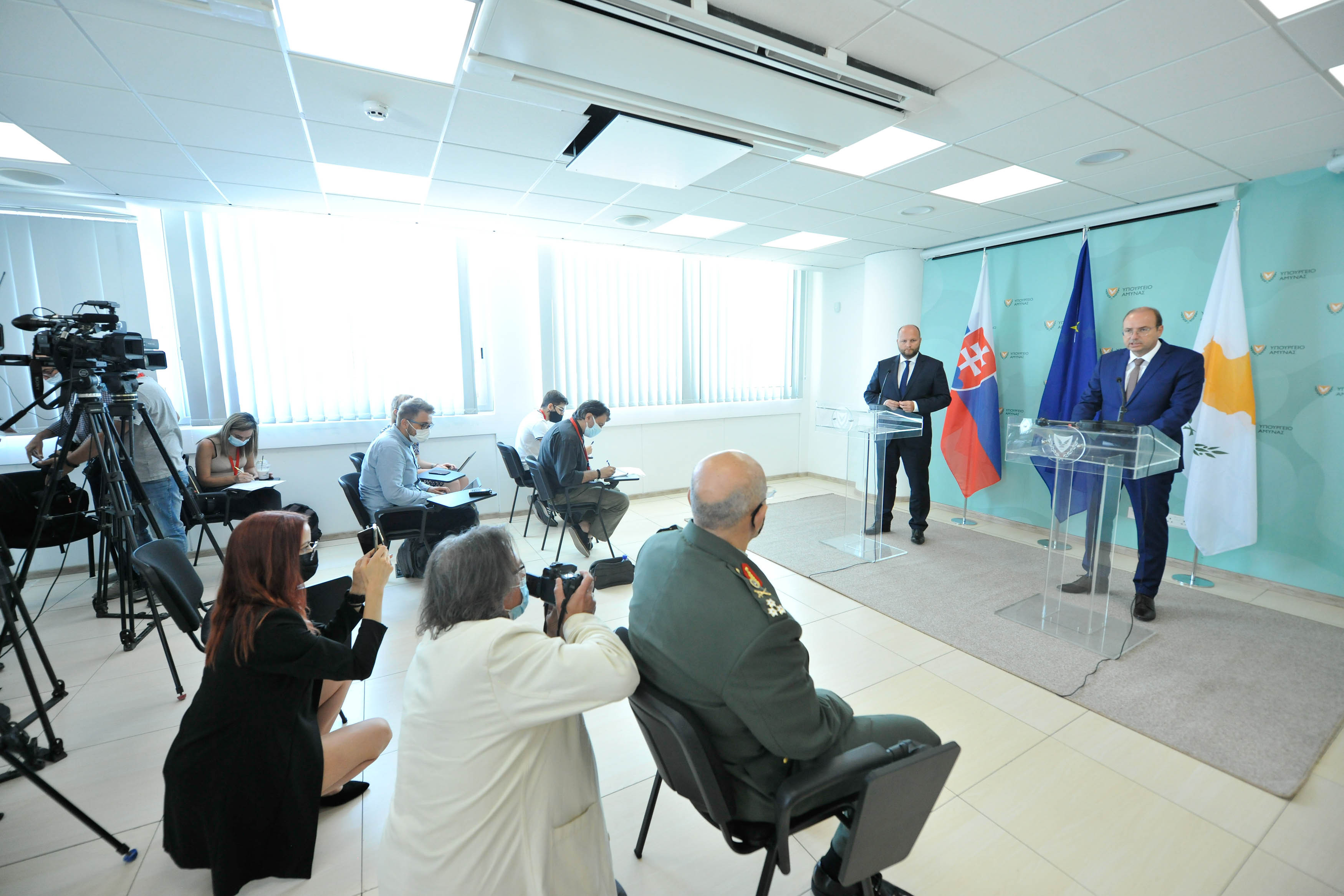 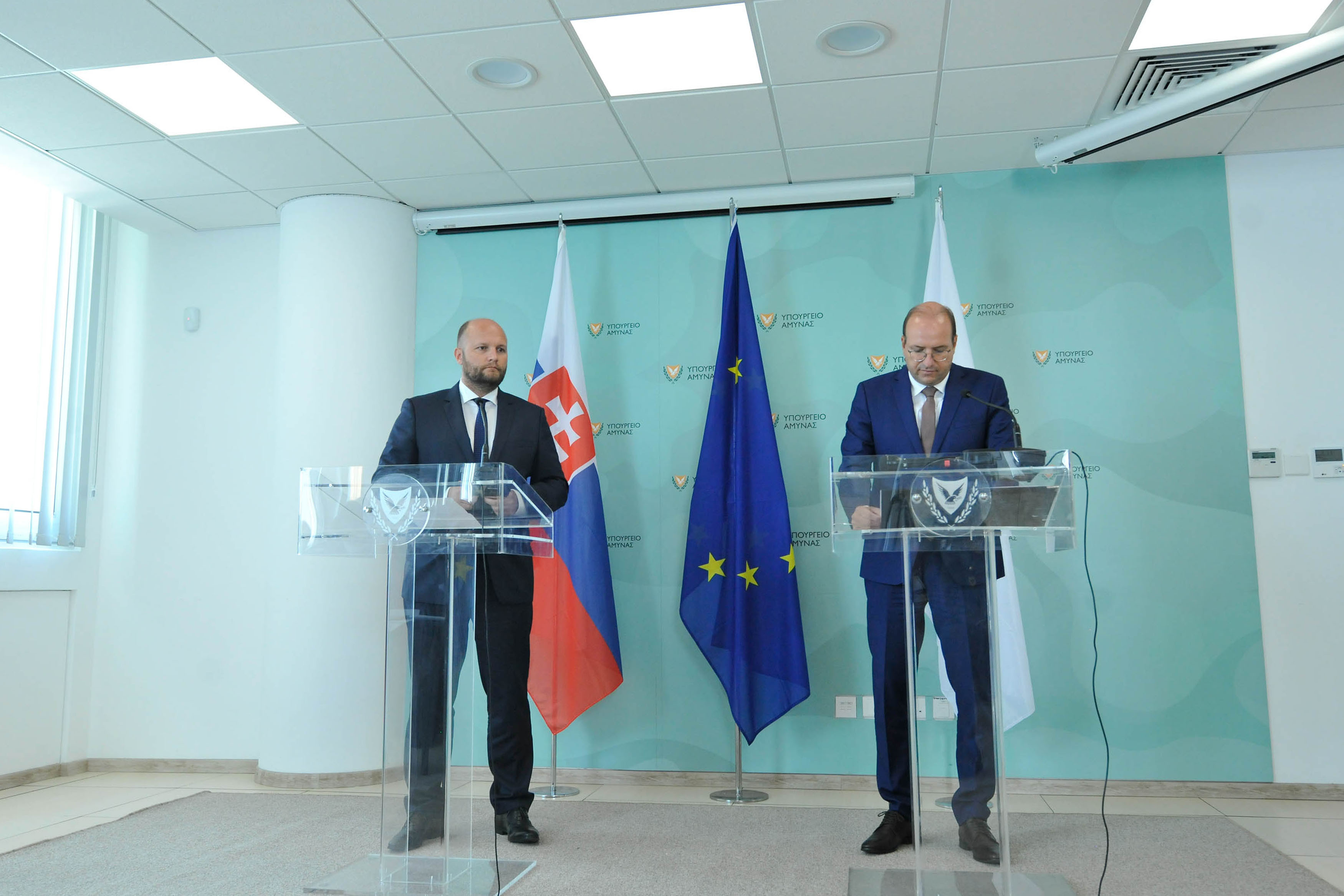 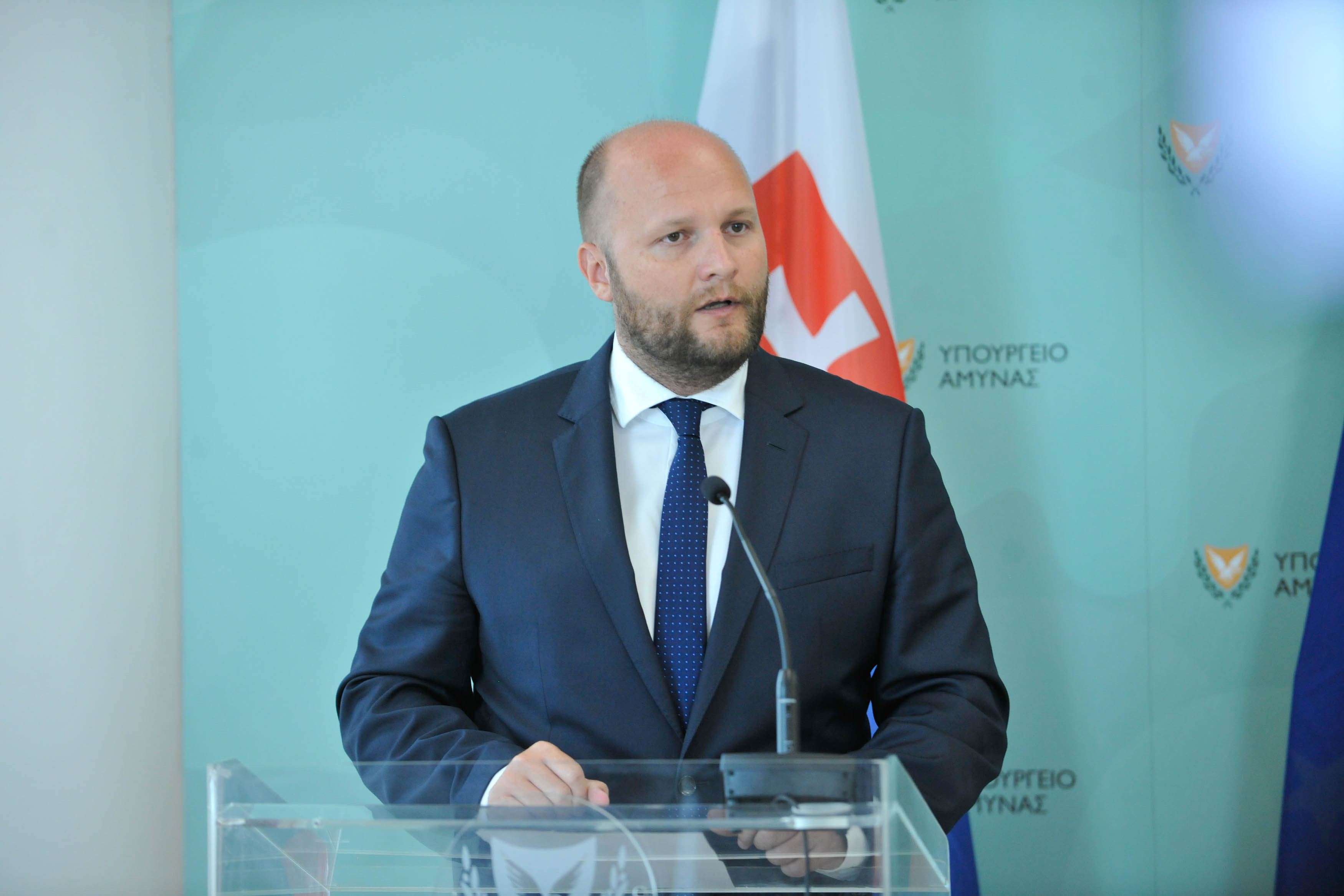 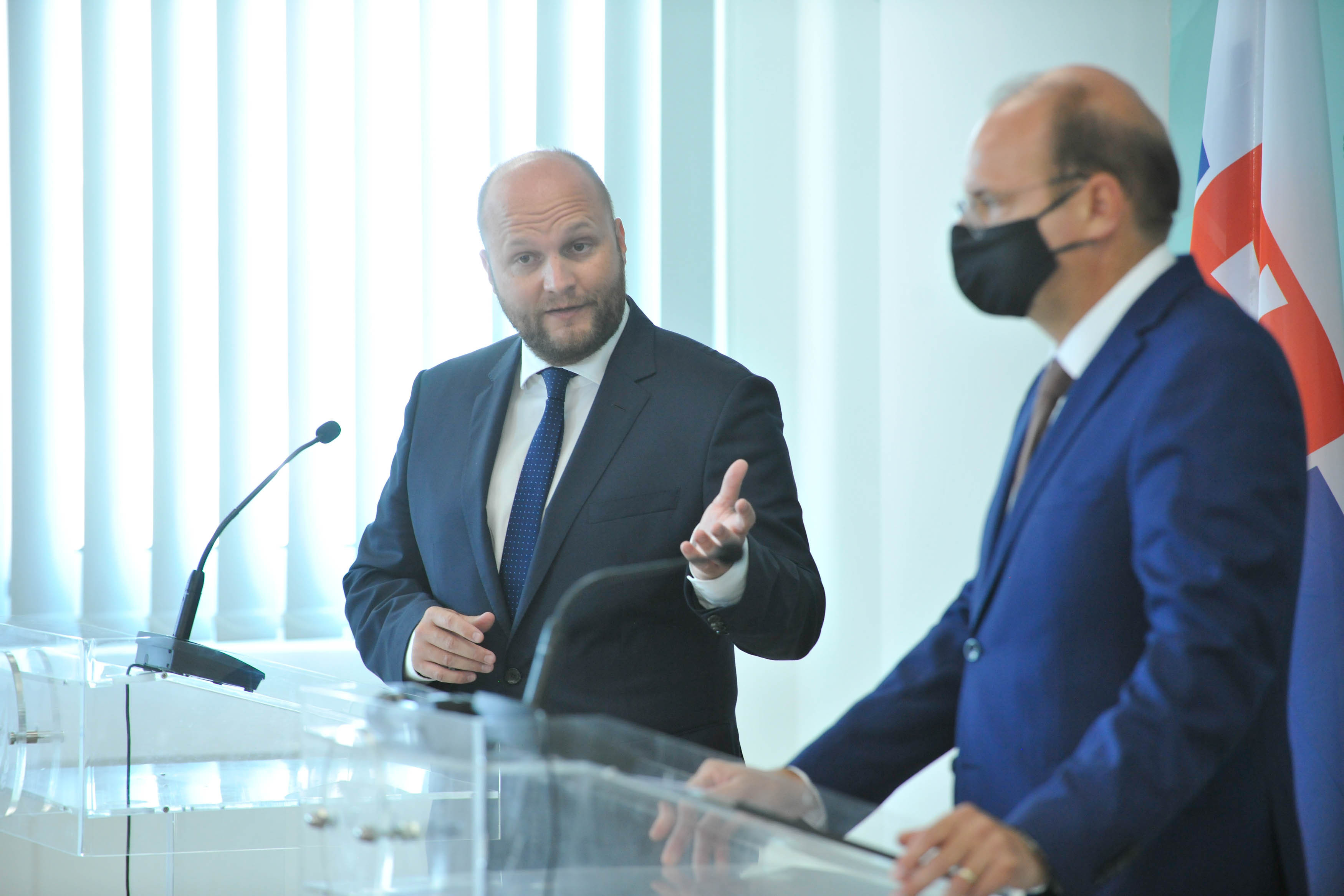 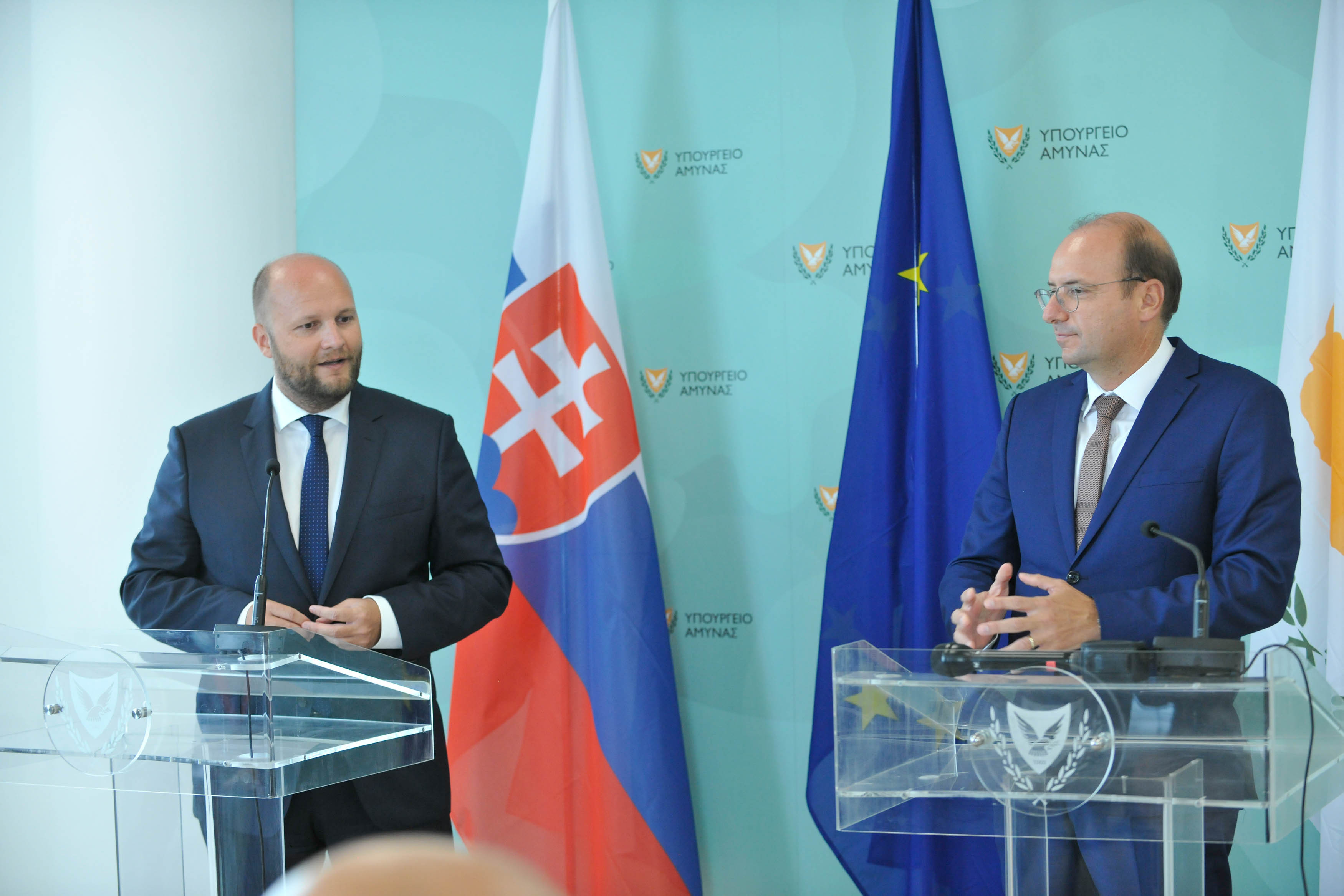 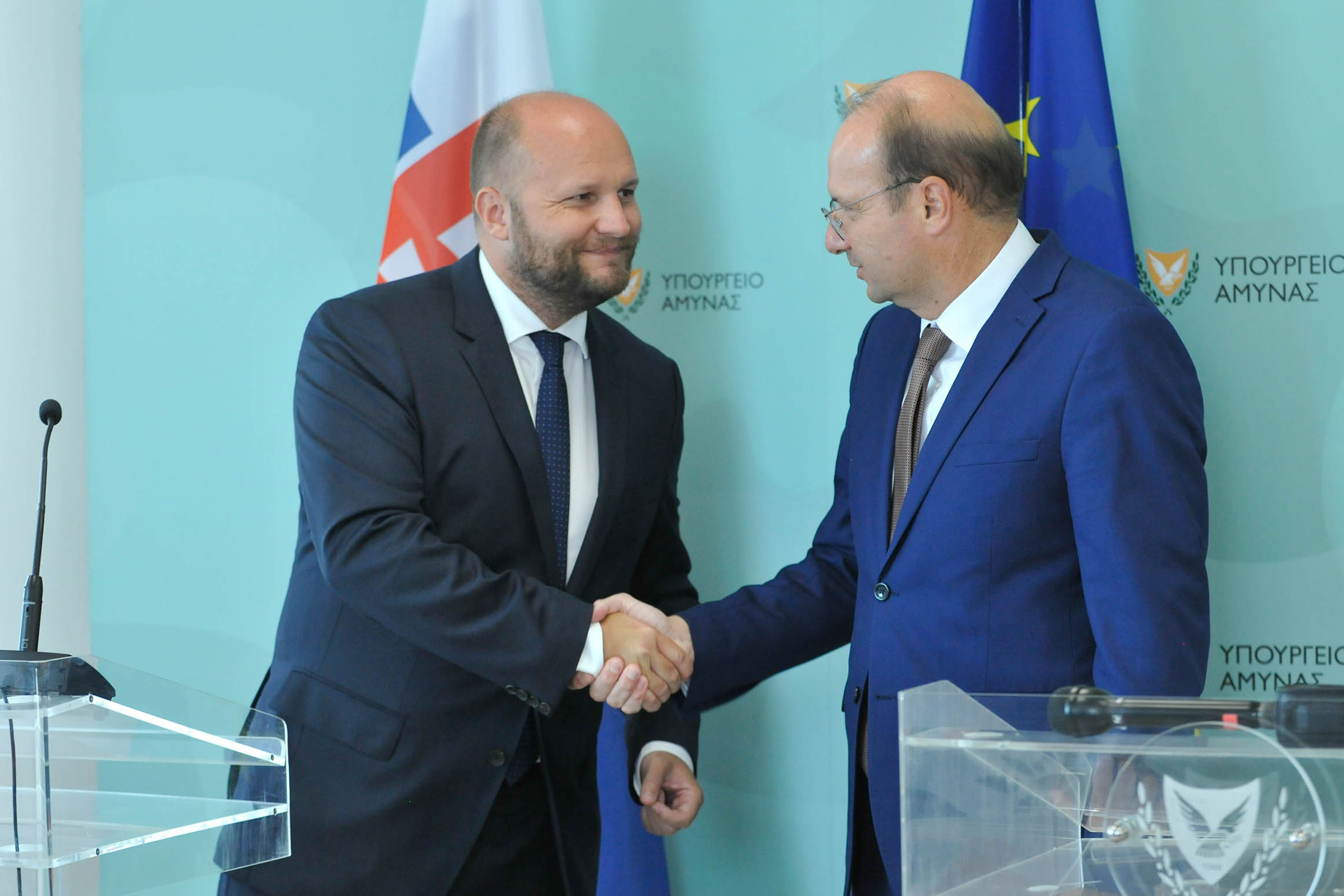 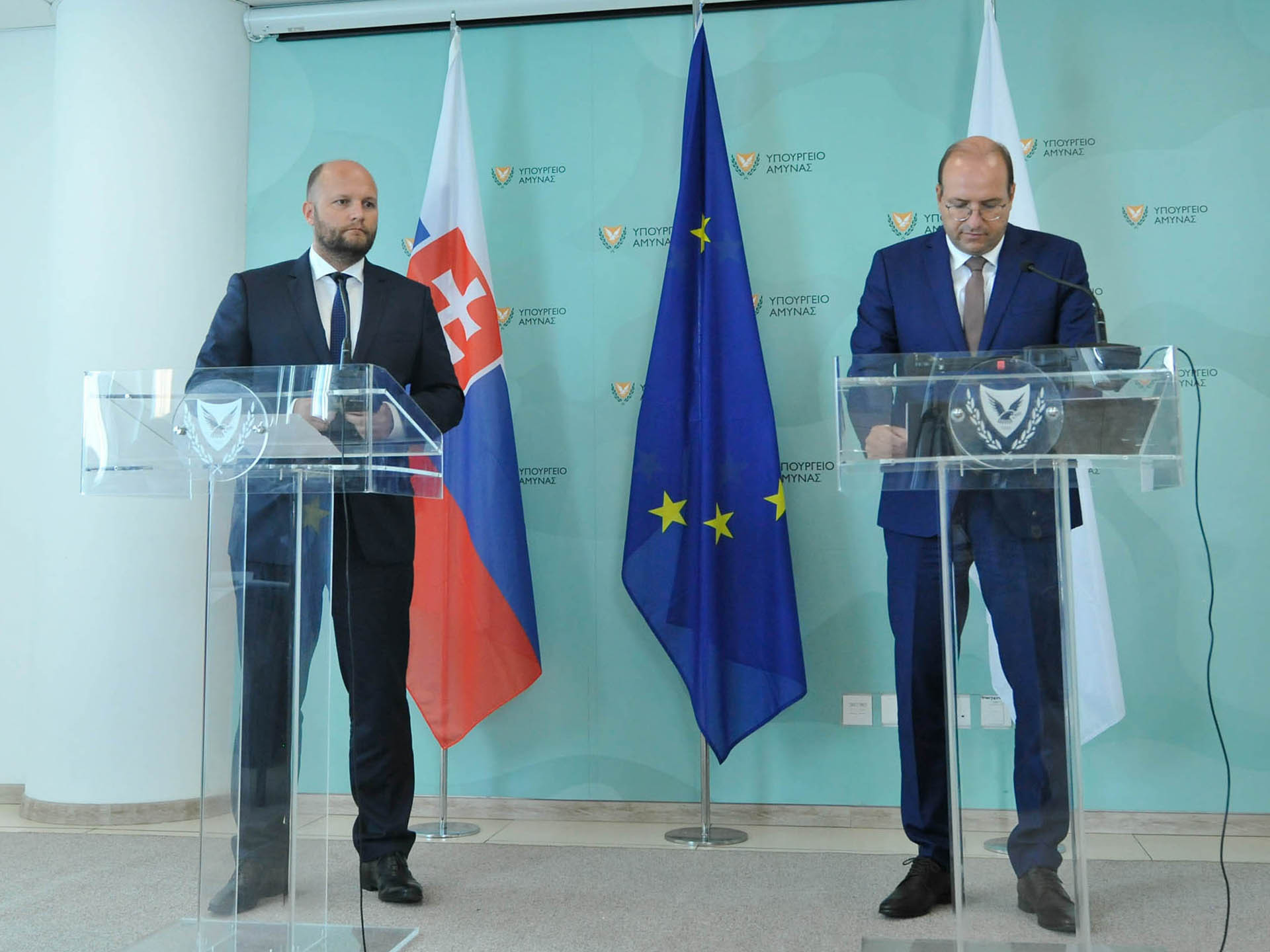 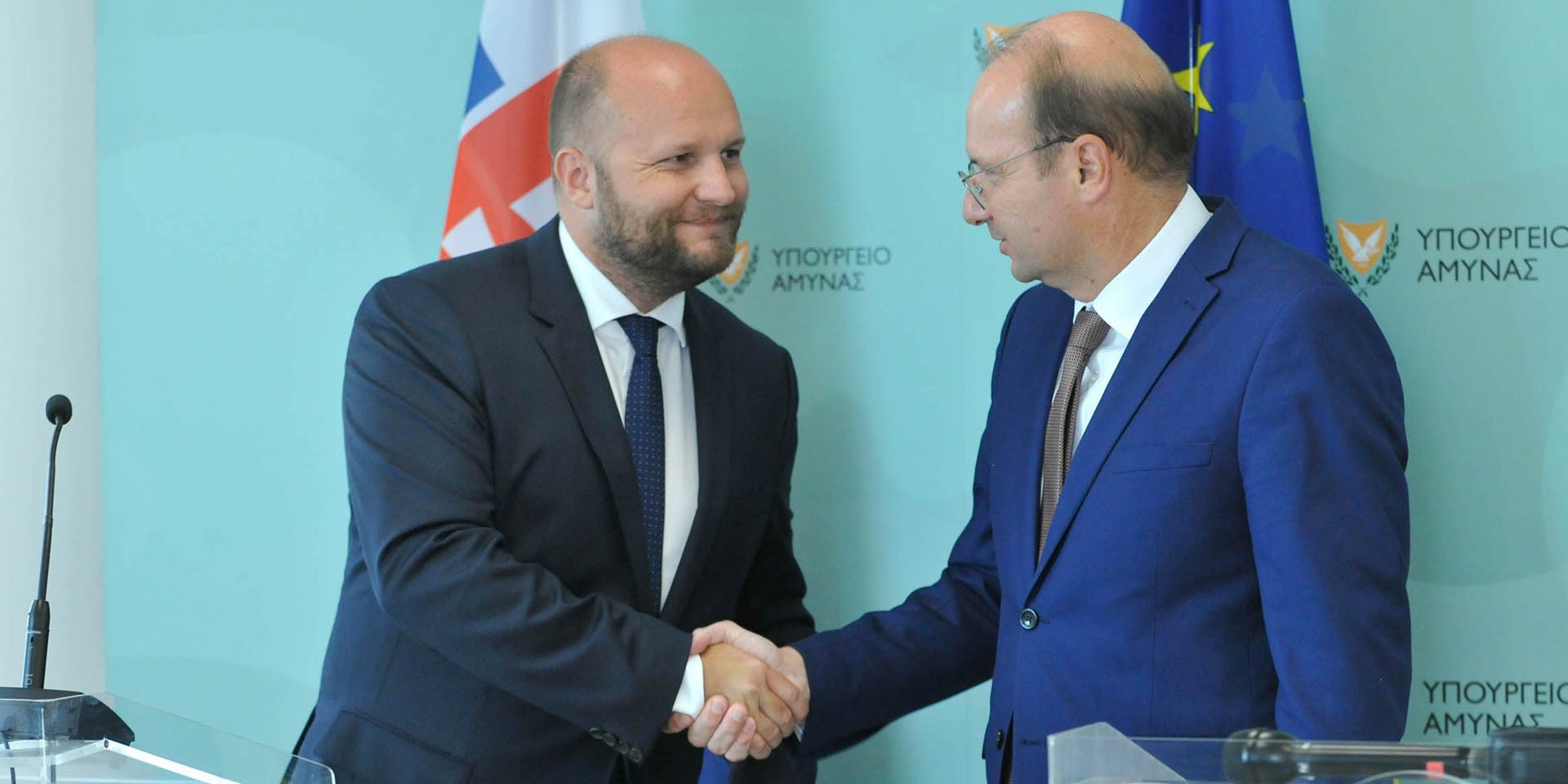 It is with great pleasure that I welcome today in Cyprus, my friend the Minister of Defence of the Slovak Republic, Jaroslav Naď, and the members of his delegation.

Slovakia and Cyprus are both members of the big family of the European Union, having joined together in 2004, and I am very pleased to note our strong bilateral cooperation in the fields of Defence and Security.

I had the opportunity to express to my Slovak counterpart our deep appreciation for Slovakia’s invaluable contribution of the Slovak contingent to UNFICYP, for twenty consecutive years. An important contribution to peace and stability that is nowadays more important than ever, given the increasing provocations by the Turkish occupation forces along the ceasefire line. As UNFICYP’s mandate is renewed, actually these days, by the UNSC we pay tribute to the important contribution of Slovakia.

We also noted with satisfaction that our bilateral cooperation is at a high level. In this context, we agreed on a Memorandum of Understanding aiming to establish general principles and procedures to carry out our future defence and military cooperation. The cooperation within the framework of the Memorandum will be carried out in accordance with the principle of mutual benefit. It is a milestone that will enable and create opportunities and possibilities for cooperation between our Armed Forces.

Moving on, I would like to add that we also touched upon a number of issues from our European agenda, as well as a broad range of regional and European issues, primarily in the context of security and defence, in a spirit of mutual understanding. Notably on the various European defence initiatives, such as the Strategic Compass, the European Defence Fund and European capabilities development.

I also had the opportunity to ask Minister Nad, for Slovakia’s expertise for addressing Hybrid Threats. Slovakia has developed an action plan for the fight against Hybrid Threats and it was really interesting to listen the country’s experience and expertise on this issue which is of close interest to us and for the resilience of our societies.

Your visit, takes place during a very critical time, not only for Cyprus, but for Europe in general. Turkey's ongoing provocative behaviour and illegal actions within the Exclusive Economic Zone of the Republic of Cyprus, in parallel with the opening of part of the fenced – off city of Varosha, test the credibility and ability of the European Union to effectively protect its vital interests, as well as the sovereign rights of its Member States.

The Statement of the United Nations Security Council on July 23rd, that condemned Turkish and Turkish Cypriot leaders to partially reopen the abandoned resort of Varosha and called for an immediate reversal of the decision, responds swiftly and robustly to the disconcerting developments in Cyprus, but we note that the seriousness of the developments in Varosha need to be addressed with more drastic and effective measures by the international community.

The Statement by the EU High Representative, on behalf of all EU member states, has also sent a very strong and clear message to Turkey for condemning recent Turkish actions on Varosha and calling for its revoke. The EU can make use of its various toolbox for conveying to Turkey a very clear message: to stop its aggressive behaviour against Cyprus and for respecting International Law and order.

Before turning the floor over to you, I wish to thank you once again warmly for taking the time to visit Cyprus in these particularly challenging times, and I look forward to continuing our deliberations over lunch.

Once again, thank you for your Country’s contribution and commitment for peace in Cyprus. Please convey to the Slovak UNFICYP contingent my very best wishes for health, well-being and our thanks and respect for their service.