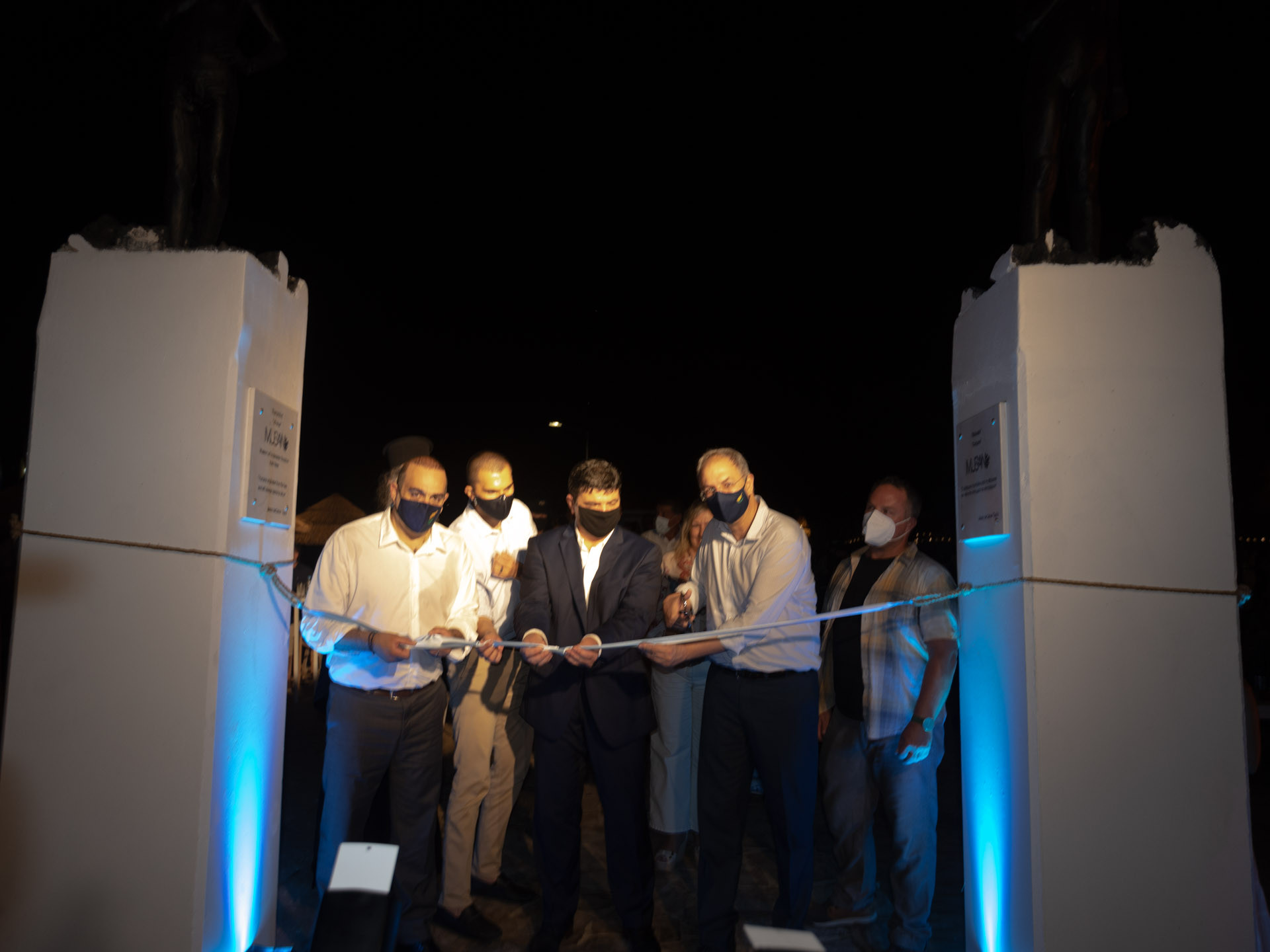 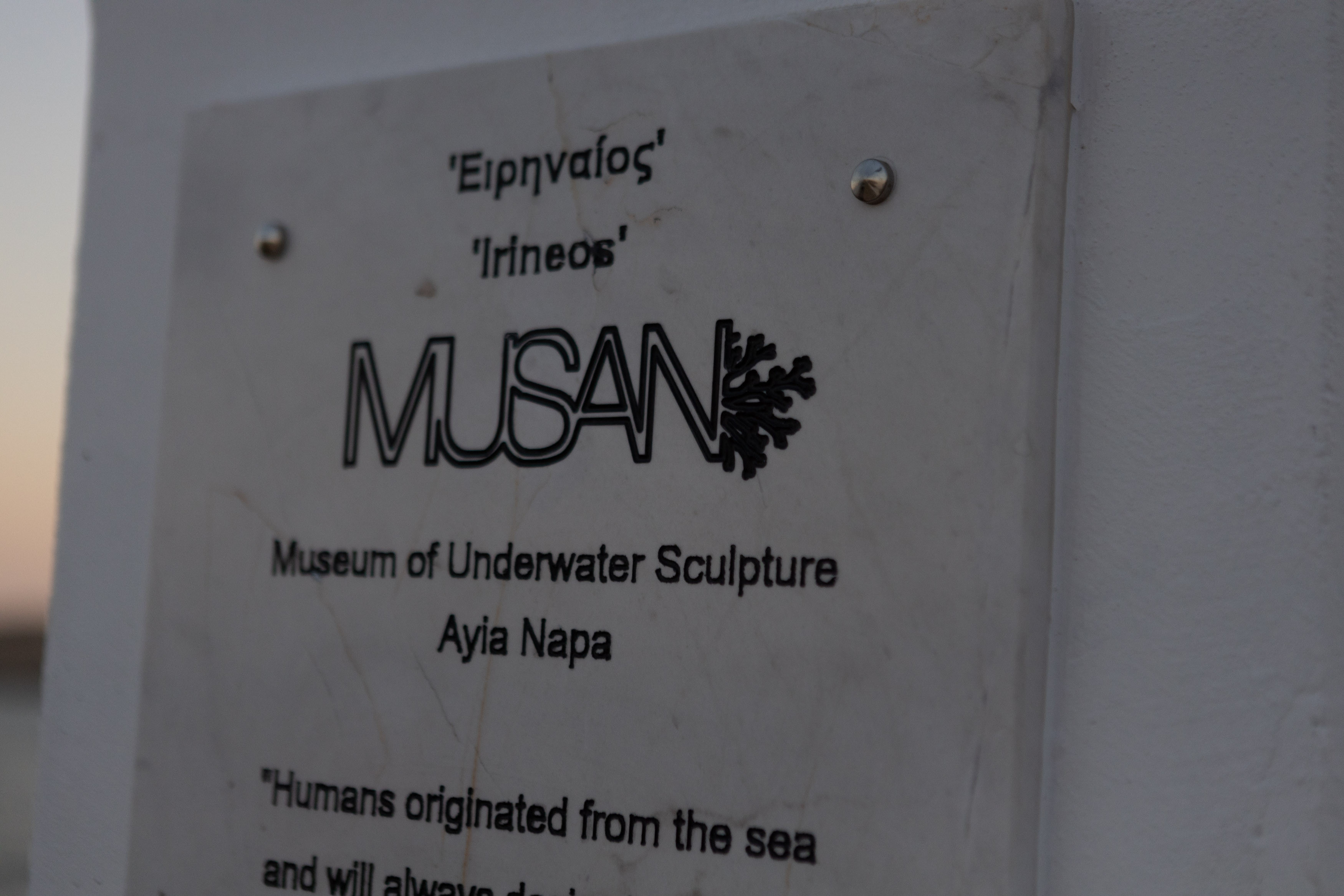 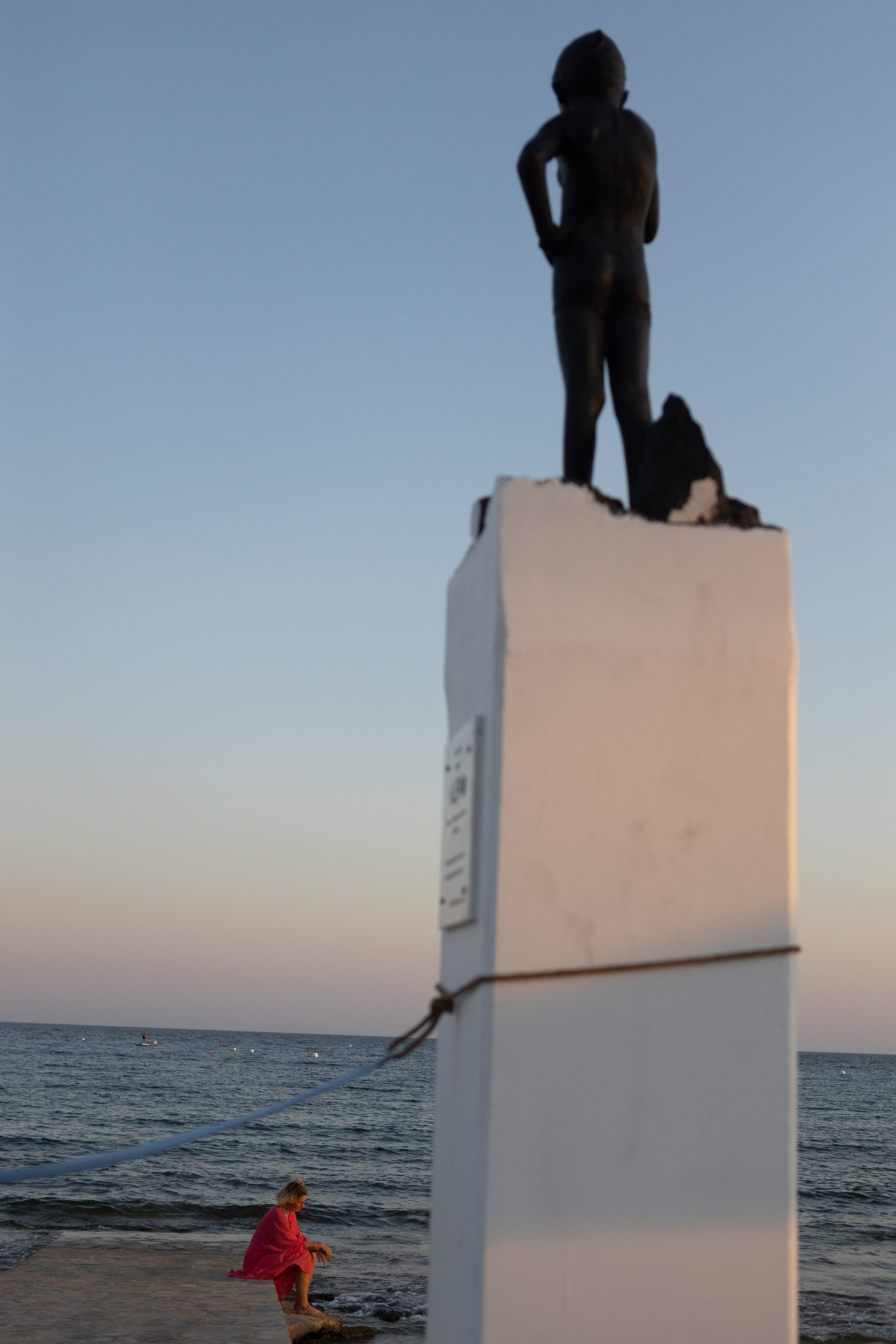 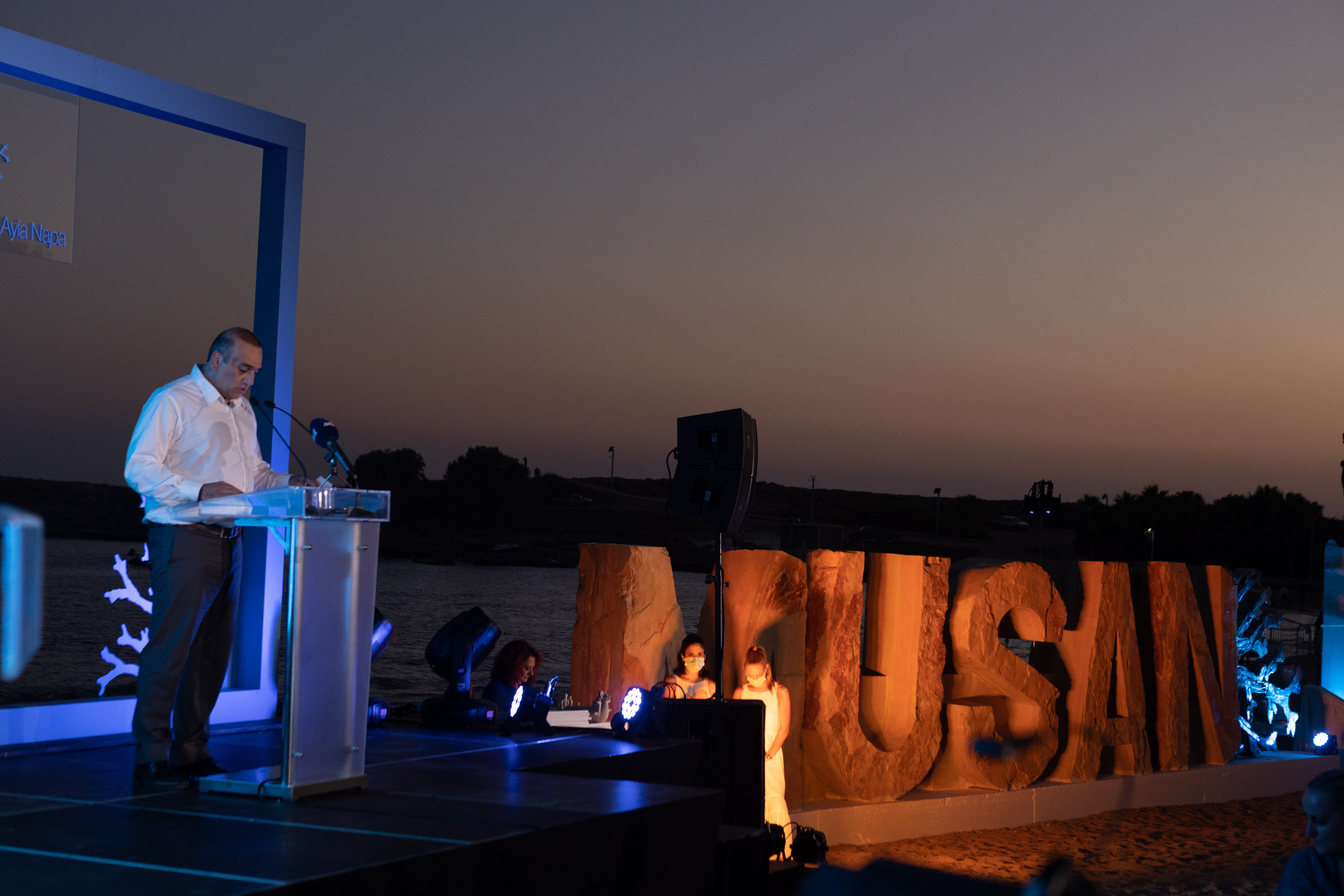 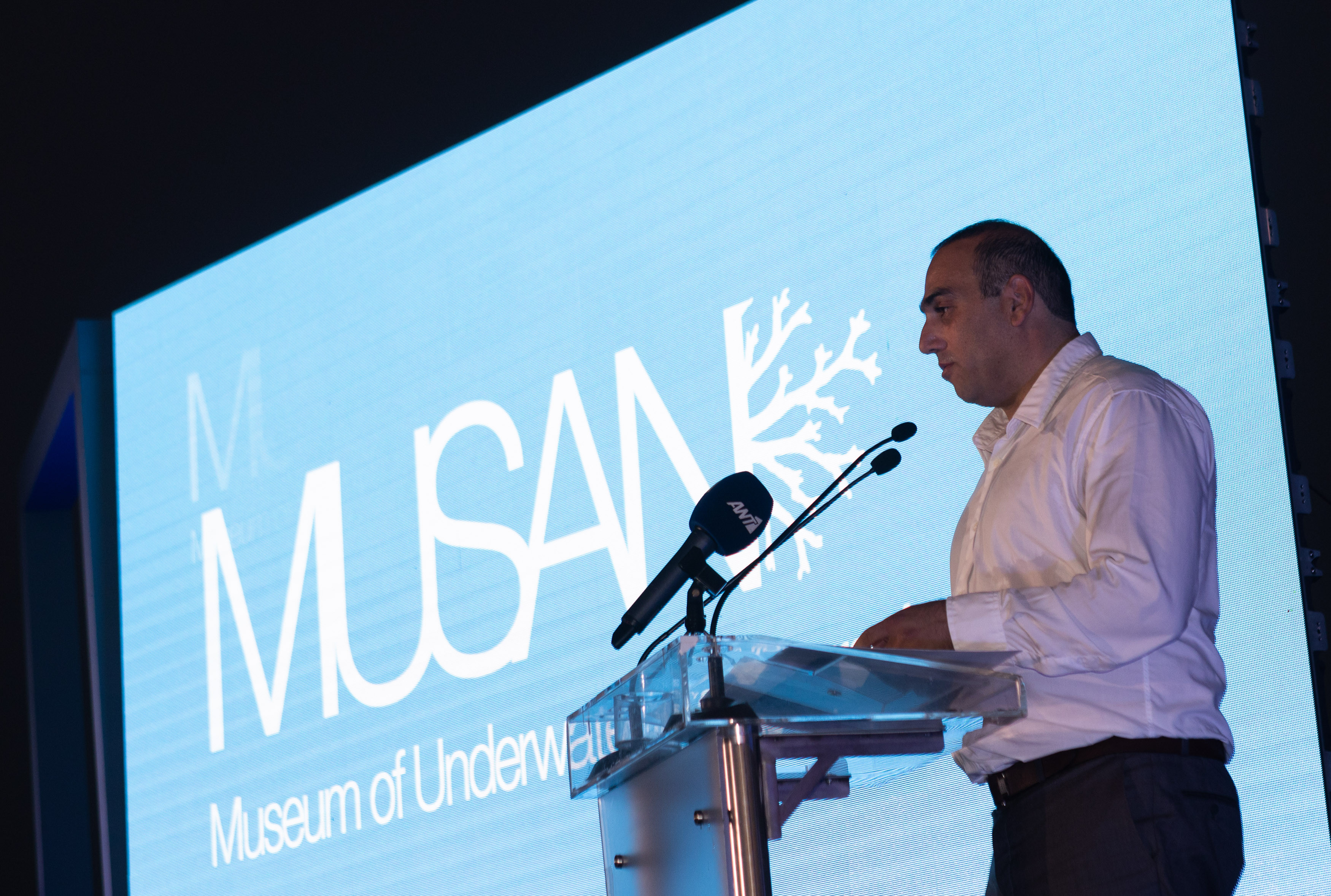 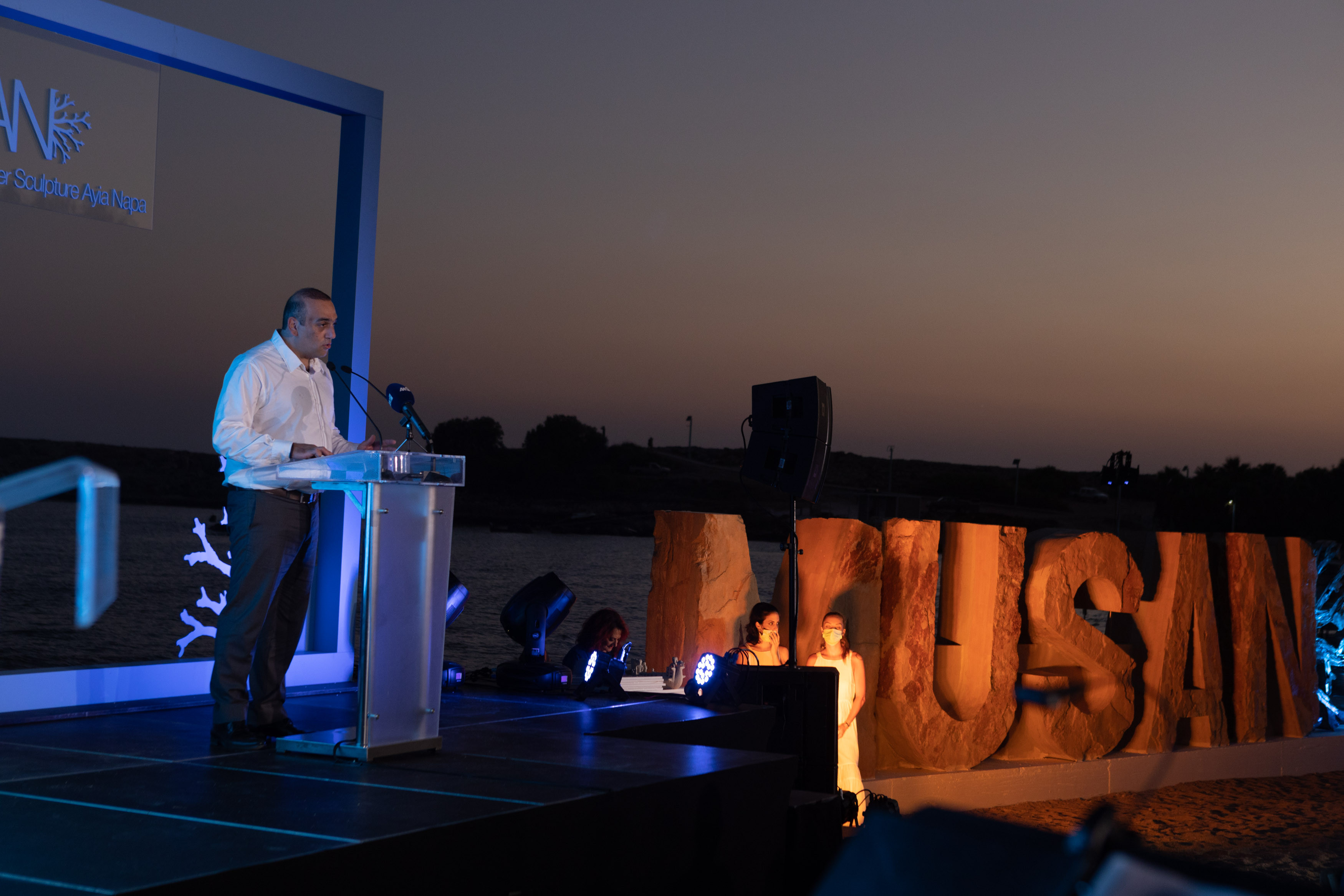 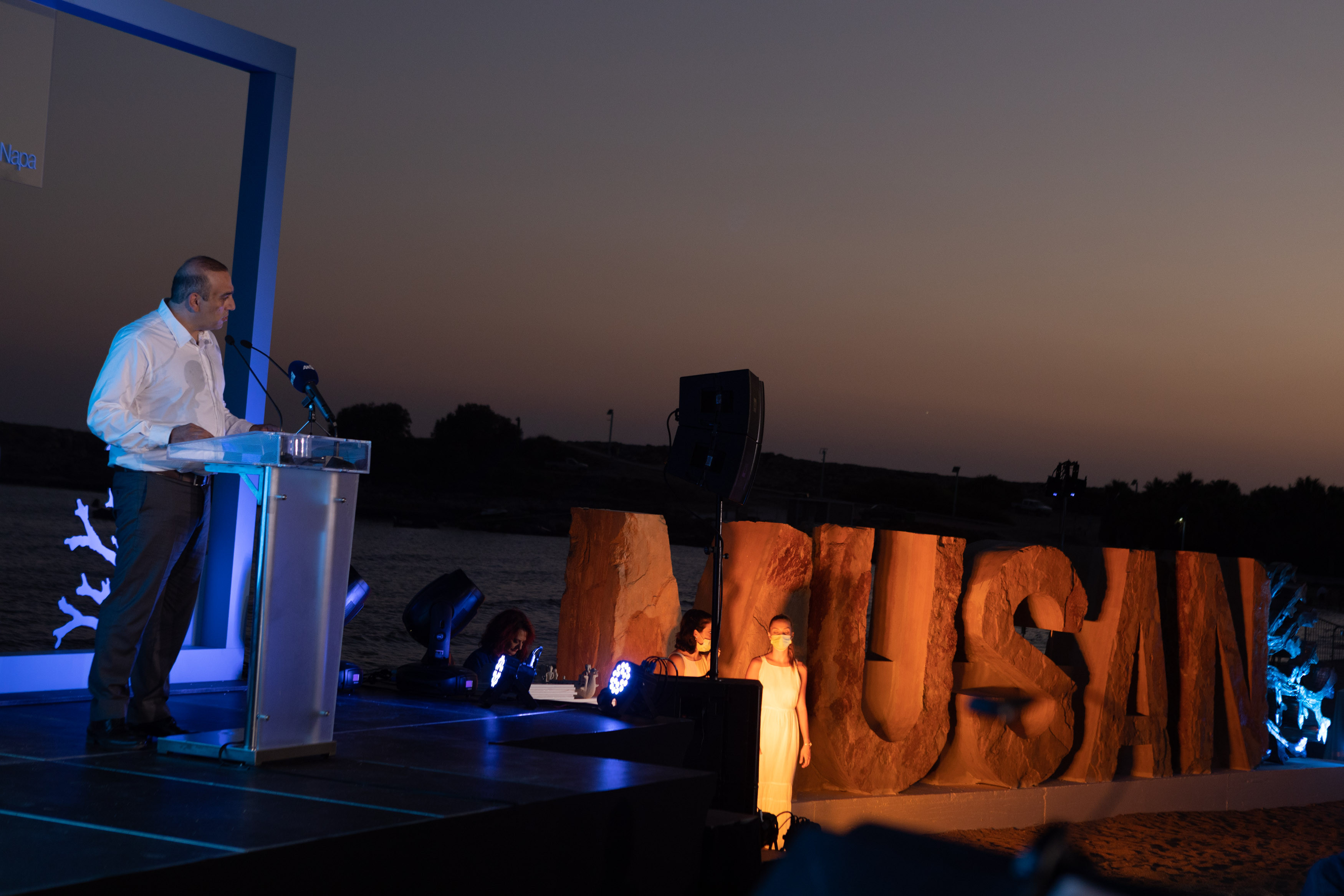 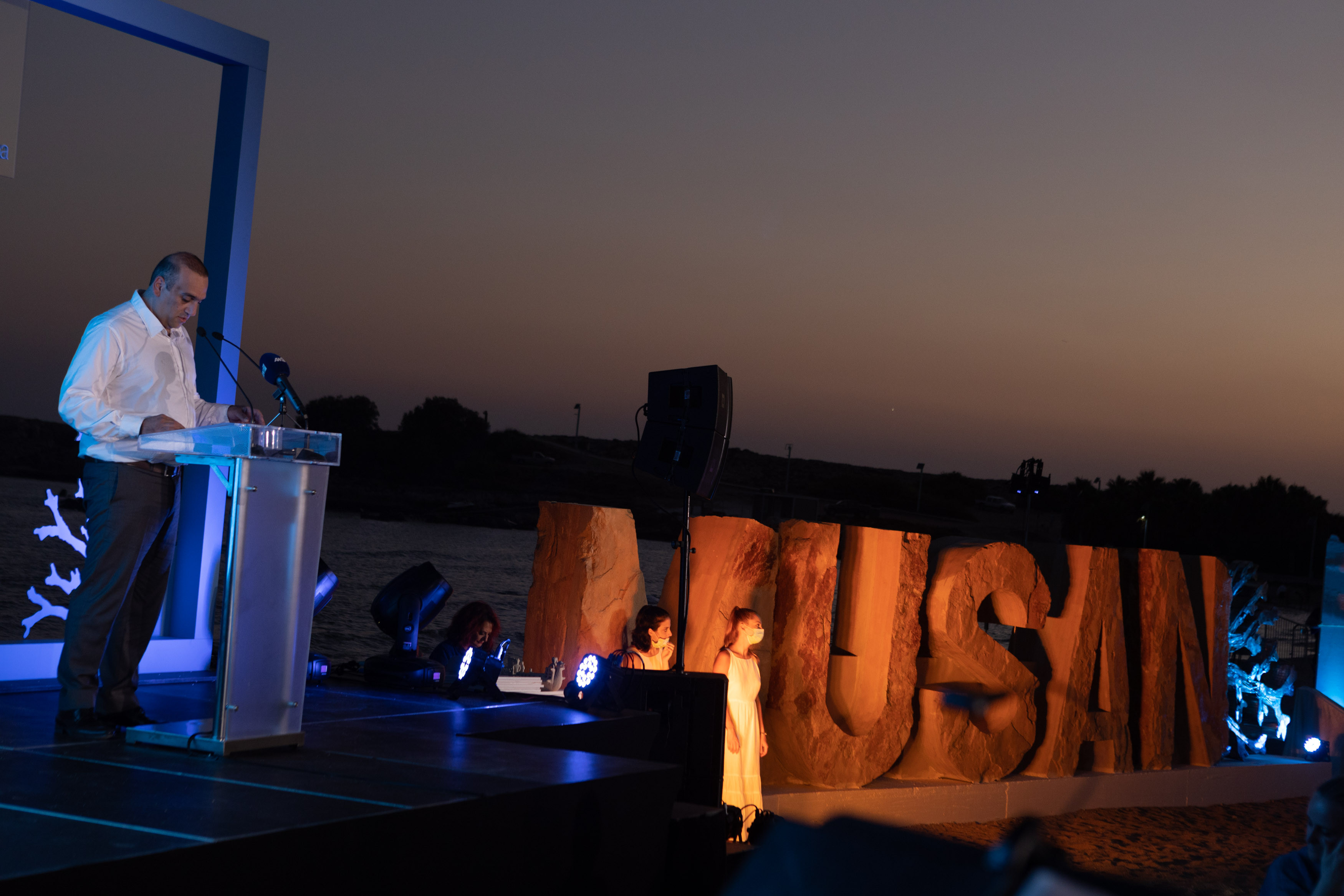 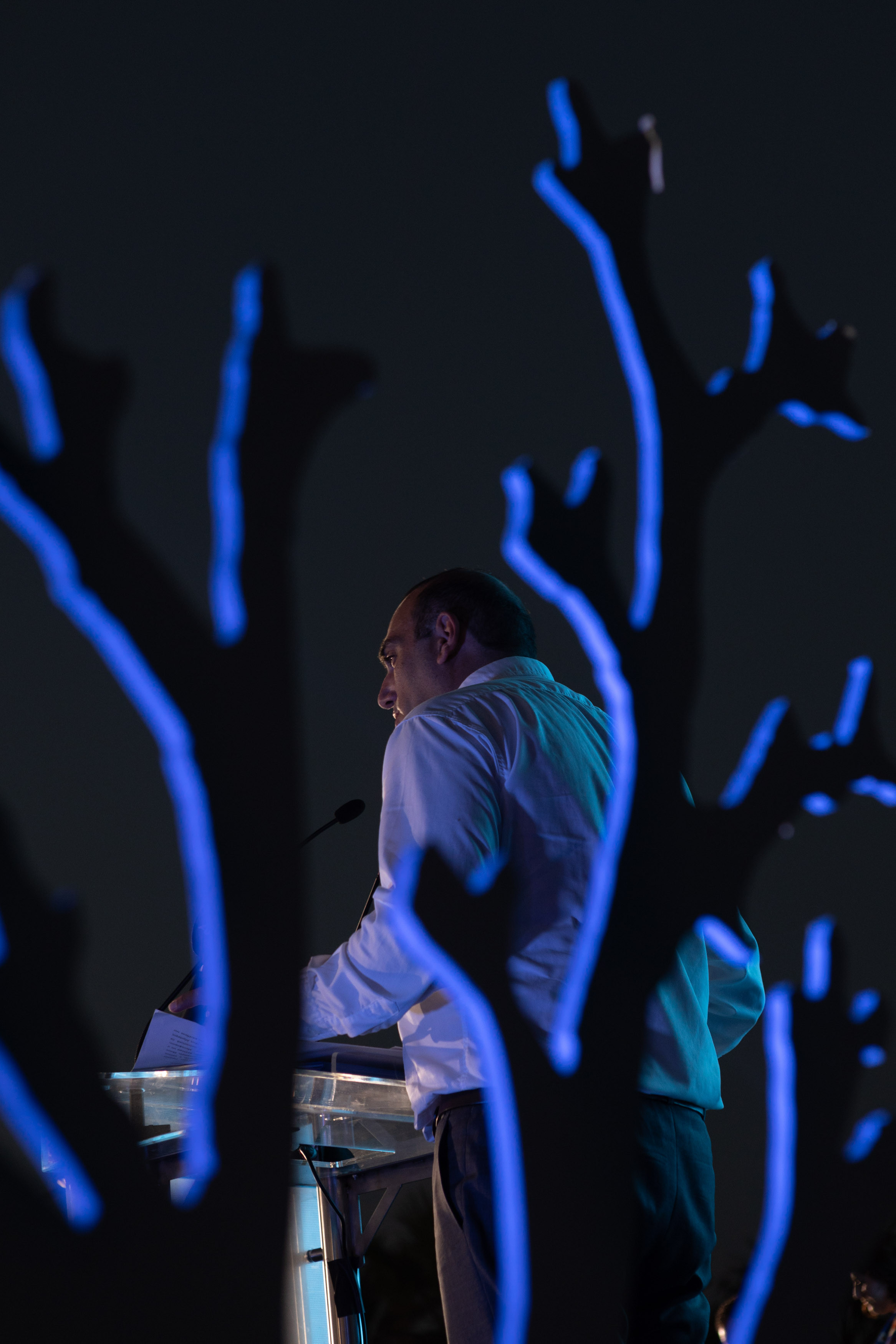 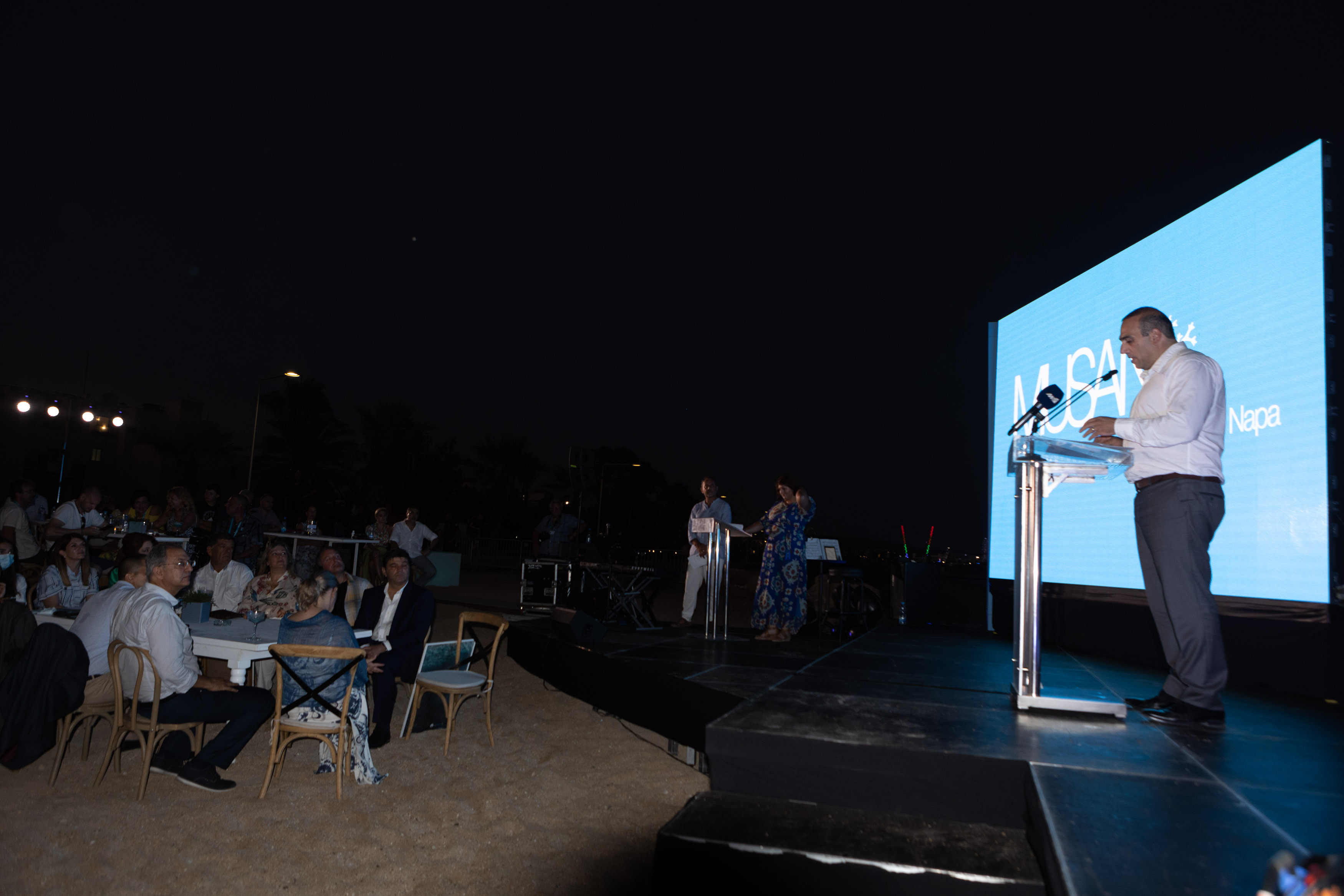 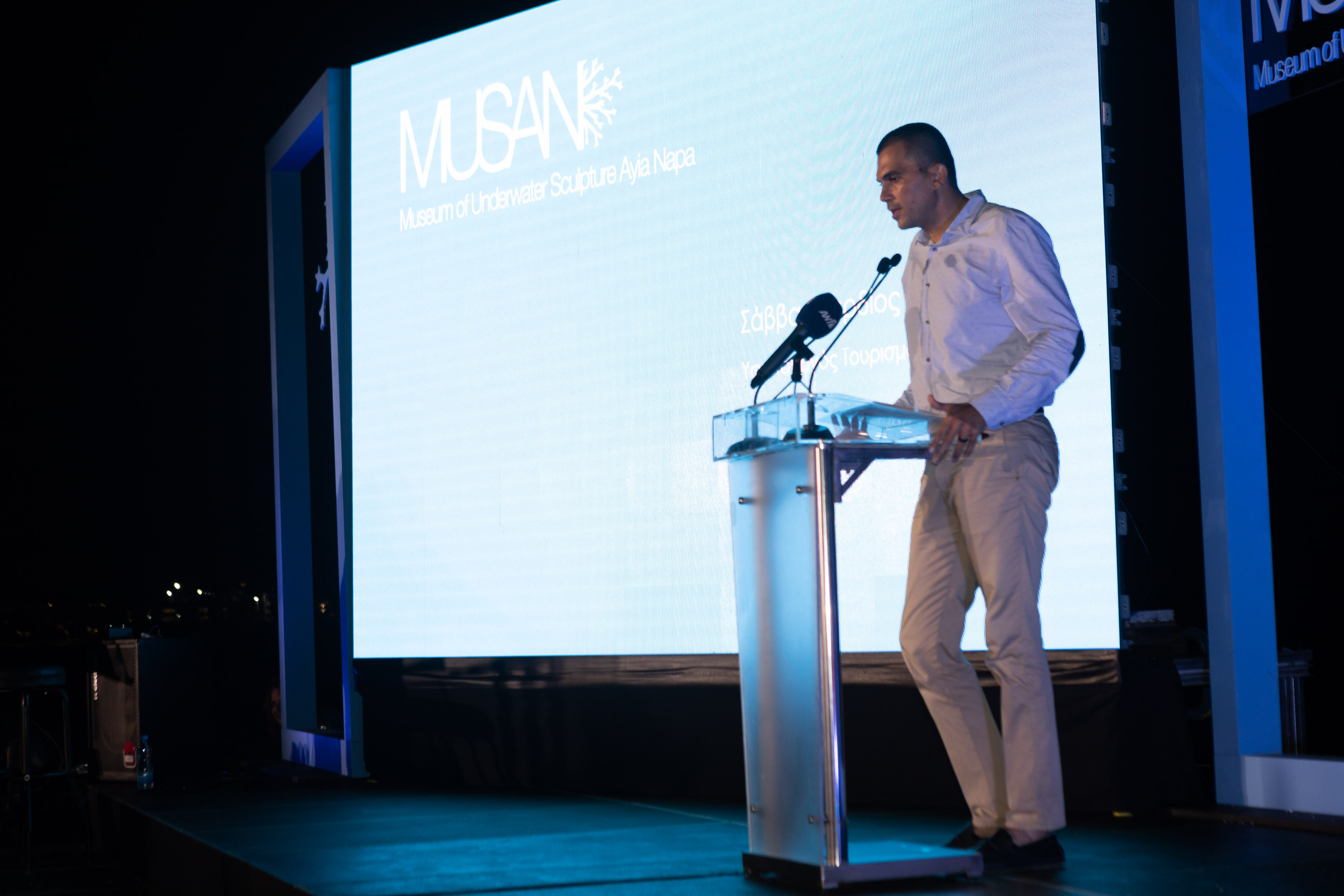 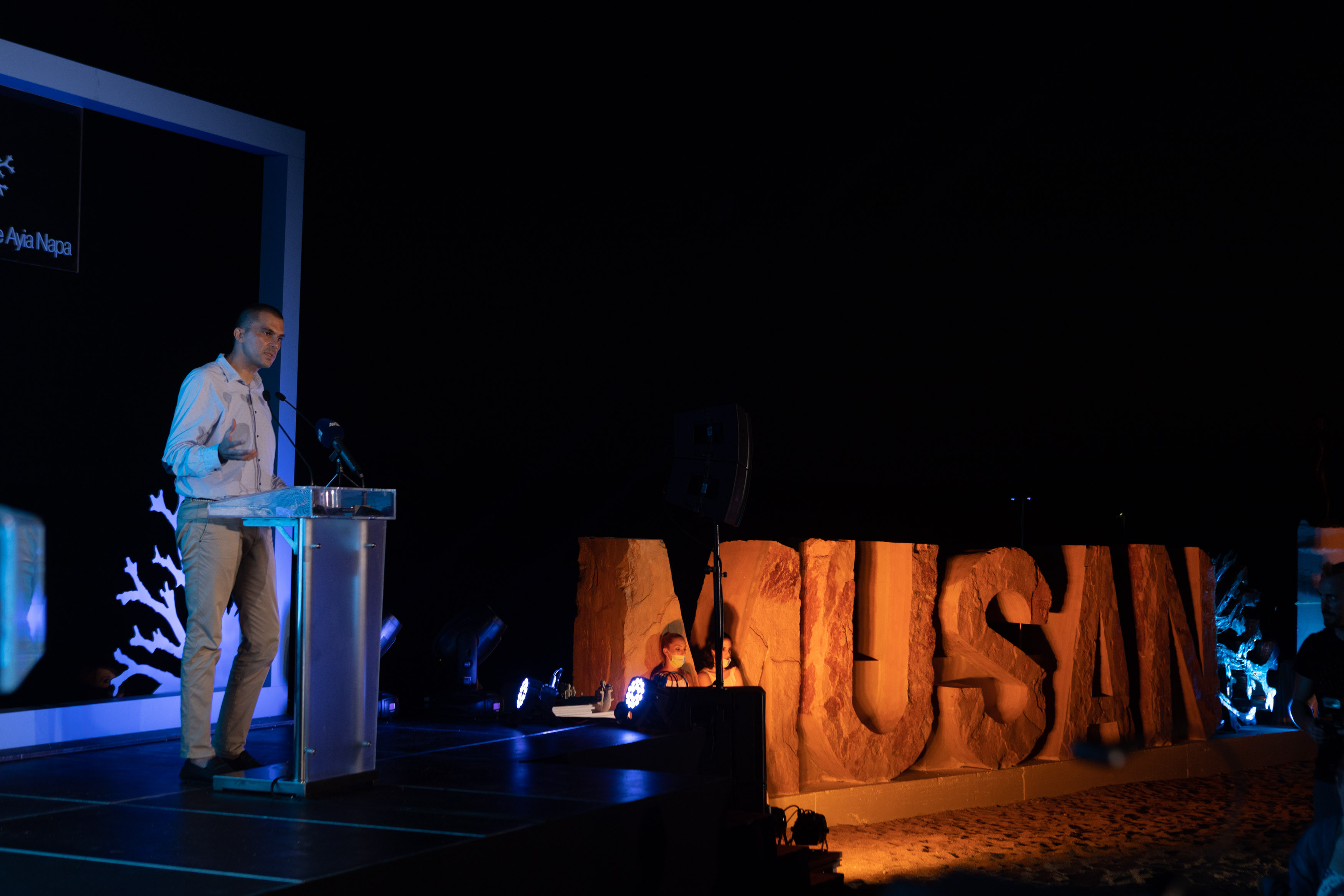 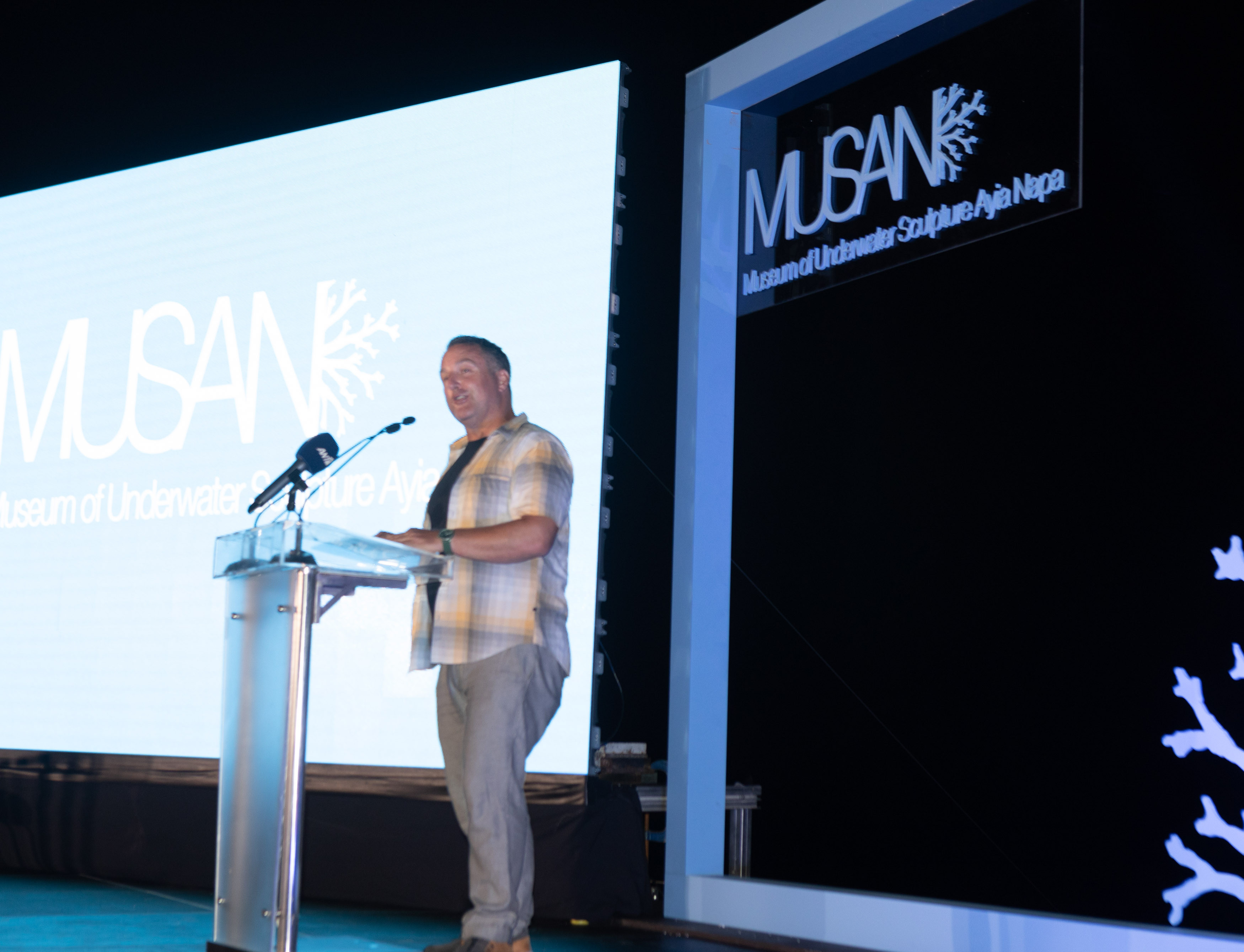 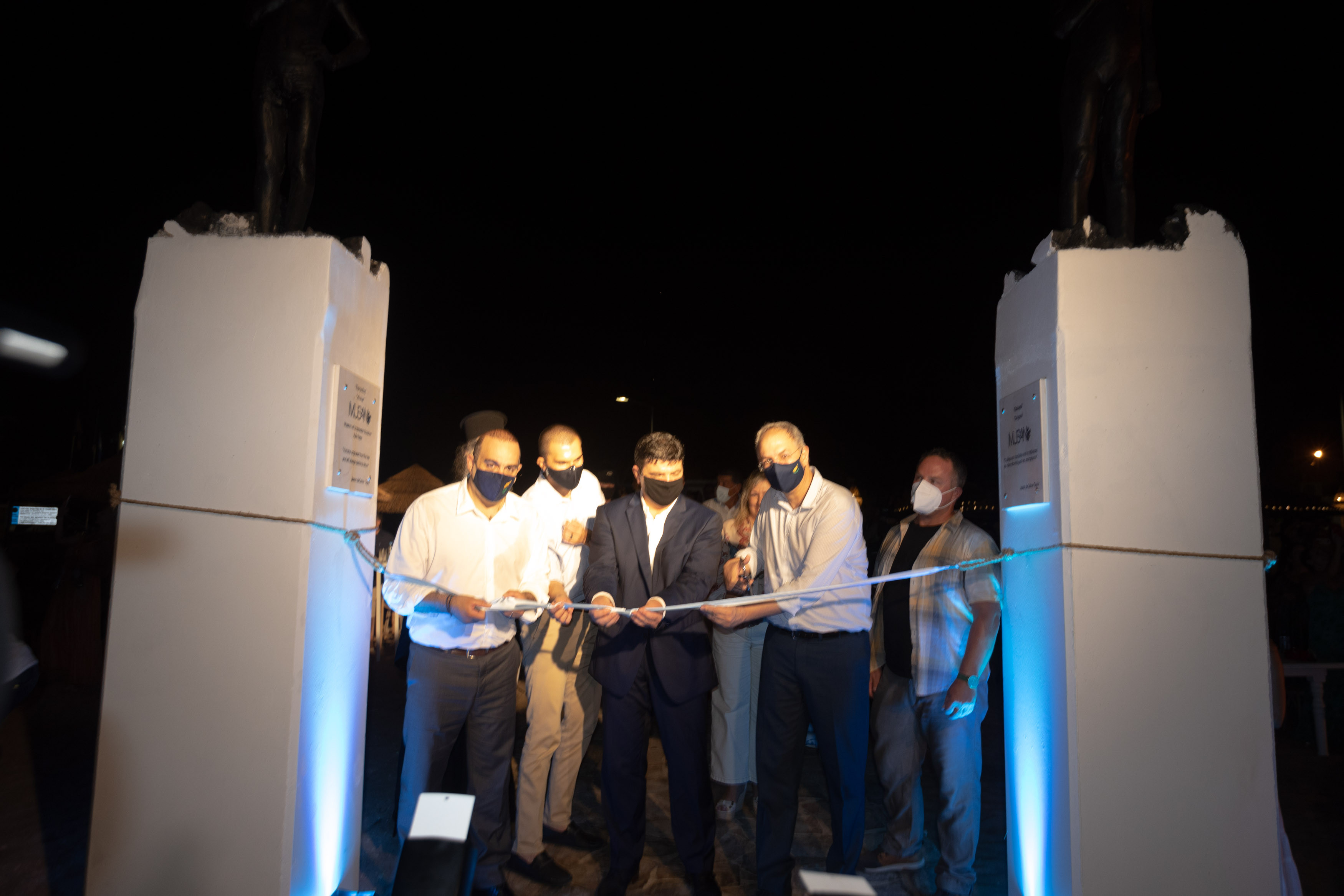 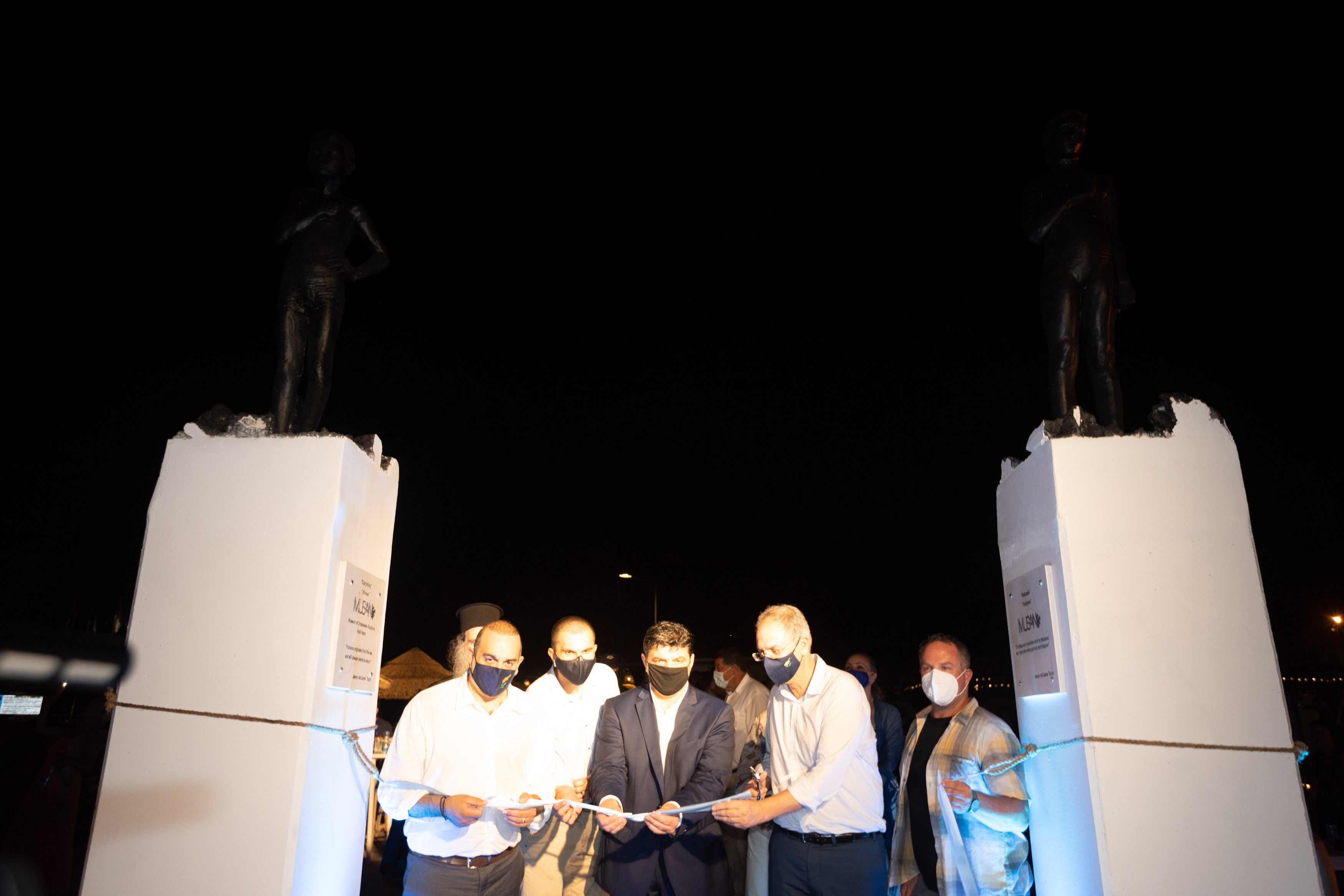 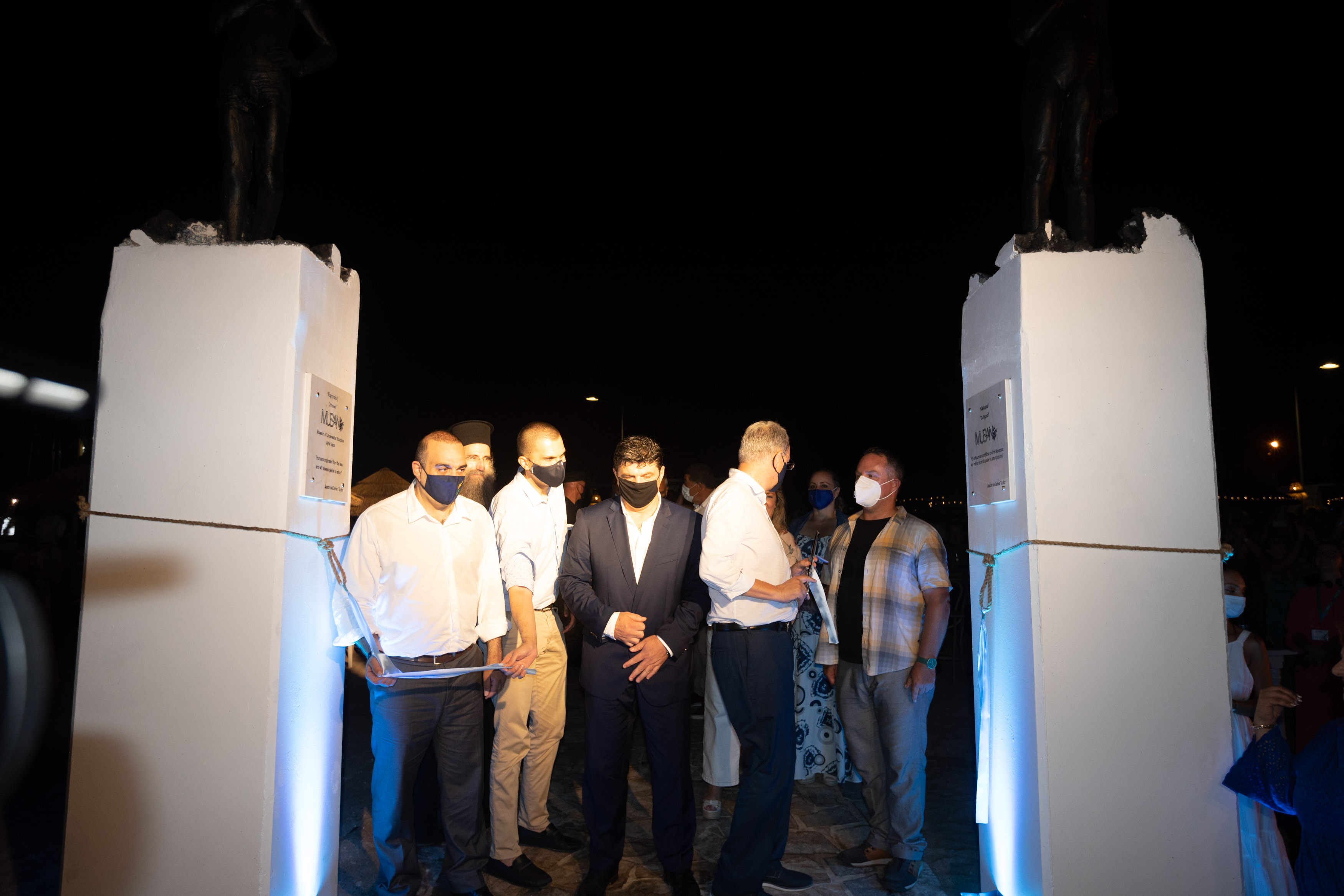 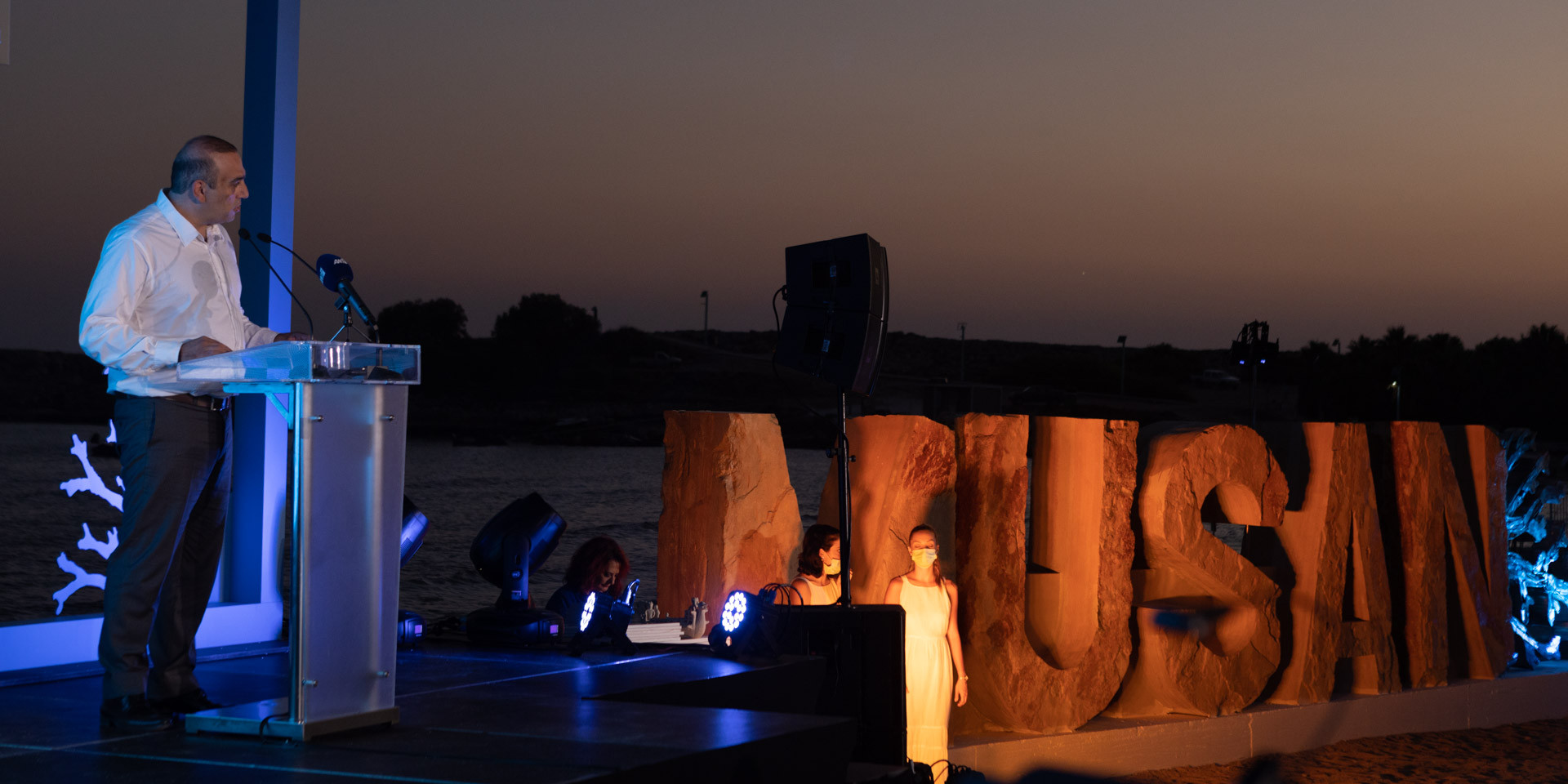 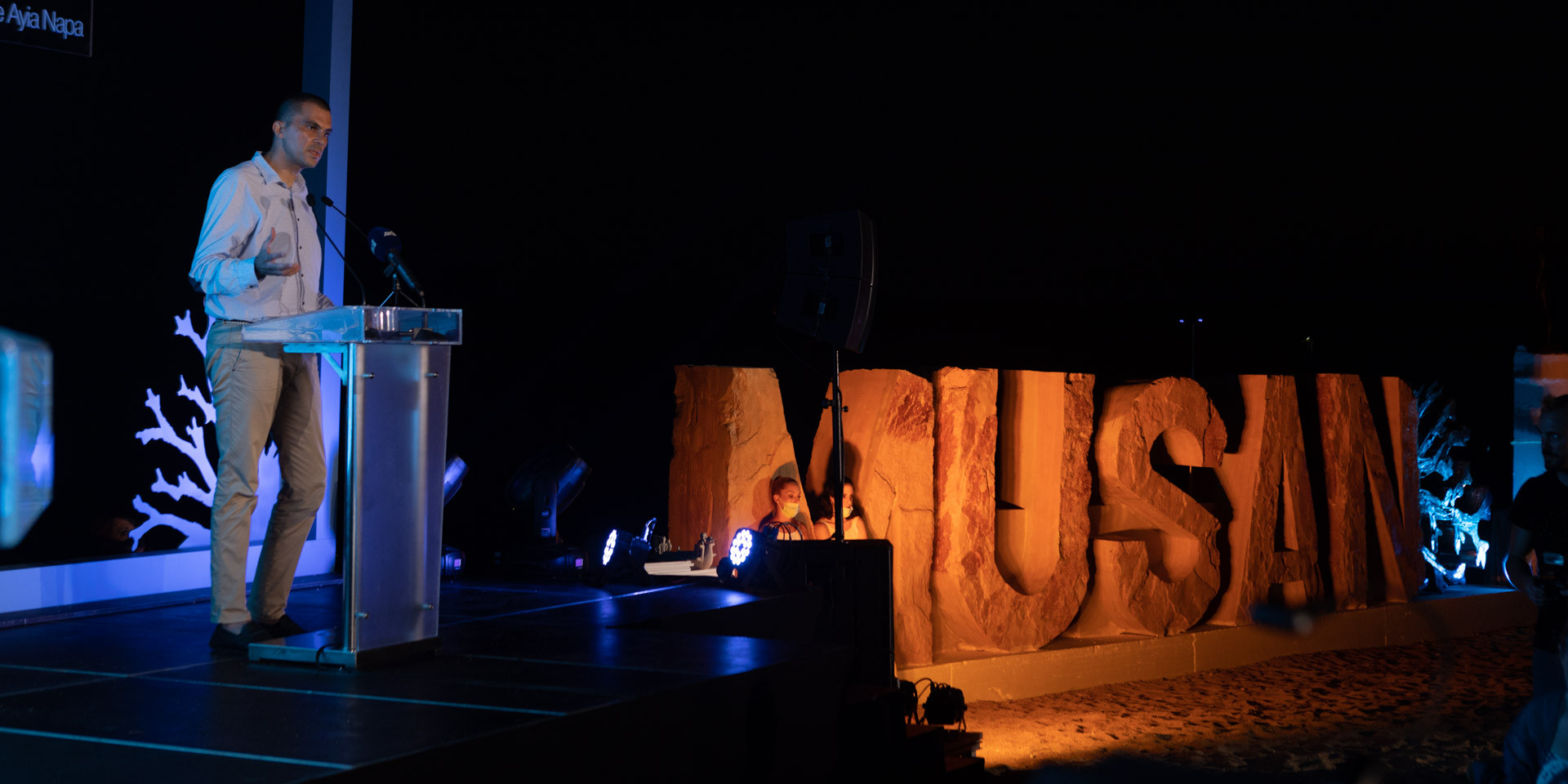 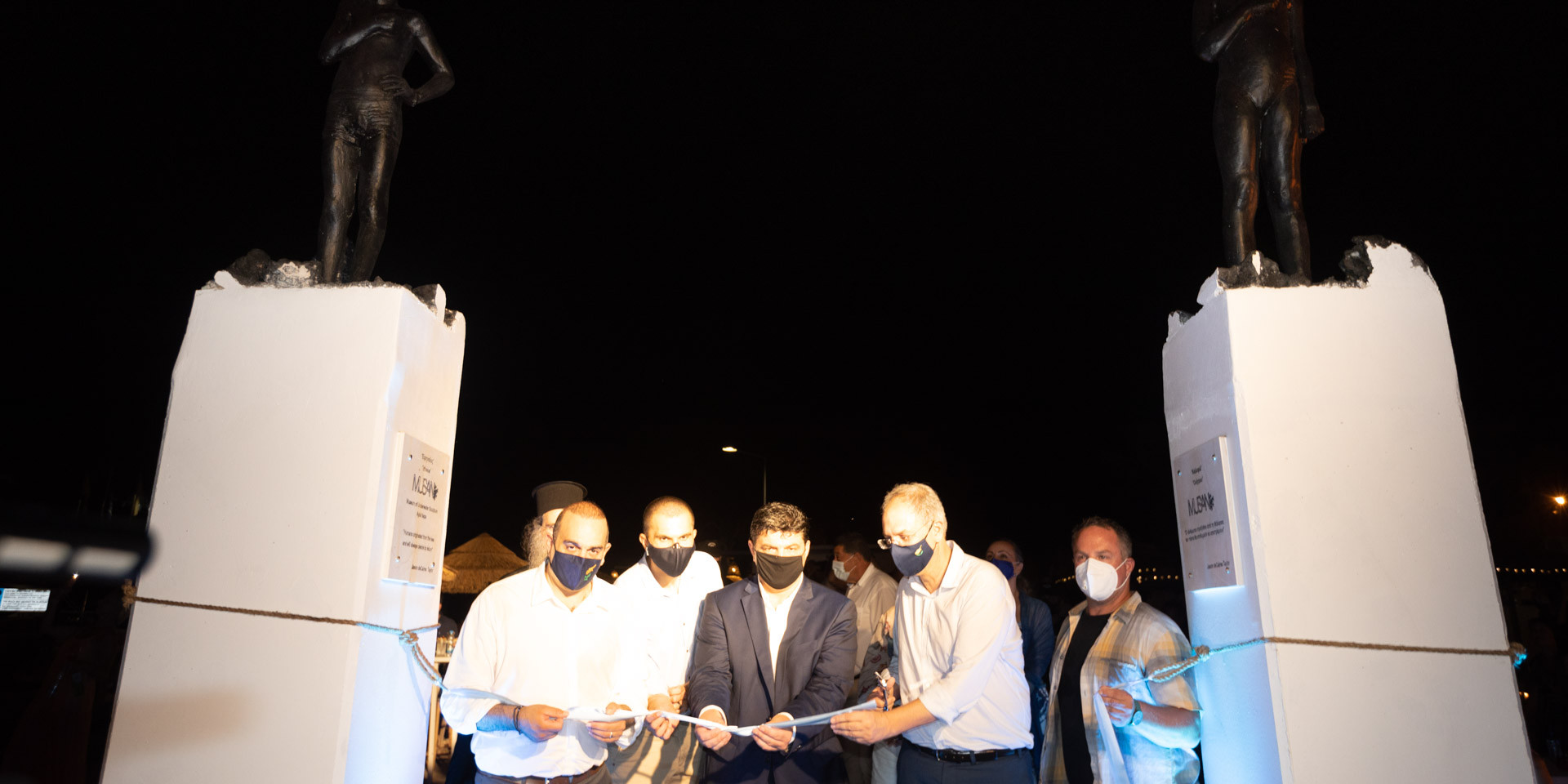 Address by the Minister of Transport Communications and Works, Mr Yiannis Karousos at the opening ceremony of the Ayia Napa Underwater Sculpture Museum (MUSAN)

When you can dream, you can perform miracles.

I am here today in a number of capacities. First as the representative of the President of the Republic who salutes the creation of the MUSAN and congratulates all those who contributed to the creation of this unique project; secondly as the political head of the Ministry of Transport, Communications and Works, which is the ministry responsible for carrying out the marine projects of our country; and thirdly as former Mayor of Ayia Napa. It was during my term of office that I put forward the idea, set it in motion, signed and began the implementation of the project, which was completed with success by the current Mayor, my friend Christos Zanettos.

The most important thing I wish to underline is the fact that the underwater museum we are inaugurating today is the result of the excellent collective work and cooperation between the Municipality of Ayia Napa and the Department of Fisheries and Marine Research of the Ministry of Agriculture, Rural Development and the Environment.  The inauguration of MUSAN proves that when there is a will and cooperation, we can perform miracles.  I am also certain that MUSAN will be known worldwide through the promotion which will be carried on by the Deputy Ministry for Tourism.  Moreover, the presence of the Deputy Minister for Shipping adds even greater value and importance to the project and I am sure it will take into account developments of this kind when it puts forward the Marine Spatial Plan for our country.

When I am asked which project I am most proud of, that was developed during my term as Mayor of Ayia Napa, I mention the MUSAN underwater sculpture park which we are inaugurating today.

The Museum is a jewel of the Mediterranean which was created by the internationally renowned artist, Jason deCaires Taylor and offers visitors a unique experience demonstrating the relationship between humans, nature, the environment and the sea.

When I became a Mayor of Ayia Napa in 2013, my vision was that by 2030 we would make it the best and most cosmopolitan tourist resort of the Mediterranean.

In order to make this vision a reality, we implemented the strategy of the ‘Full Tourist Experience’.  The aim of this strategy was to enable visitors to acquire unique experiences and memories, which will carry them to their countries and make them want to return to Ayia Napa, thus creating repeated visitors.

Having this objective in mind, we set out to transform Ayia Napa into a town of experience, parks, monuments and points of reference. As part of this strategy it was essential that we would also create underwater points of reference in order to develop diving tourism as well.

Based on this vision and strategy, in 2014 we set down a proposal before the Municipal Council for the creation of a unique underwater point of reference: the underwater sculpture park.  In 2017, with the cooperation of the Department of Fisheries and Marine Research, we began to mature the project and in 2019 the contract for the implementation of the project was signed.

I am certain that all visitors to the underwater park, upon their return to their countries will take with them some of Ayia Napa's experience.

Dear friends, many people have contributed to the completion of this project. Some envisaged it, prepared the proposal and promoted it, others helped with their experience and technical knowhow, others helped in its construction, and others will contribute in the future to promote and operate the MUSAN. What is most remarkable is that they have all believed in this project and embraced it, and that is why we have today an excellent and unique result.

Please allow me however to talk a little about the background of both the creation of the reef and the underwater museum, as well as to talk about certain contributors, whom I feel duty-bound to mention by name and thank publicly.

We started out in 2013 by dynamically demanding the creation of an artificial reef in Ayia Napa, and we succeeded in this in cooperation with the then director of the Fisheries Department, Mr Loizos Loizides, as well as the President of the association of professional fishermen of Ayia Napa, the late Pavlos Kremastos, who undertook the difficult task of persuading the professional fishermen regarding the creation of the artificial reef. The construction of this reef formed the basis for its further development and enhancement.

In January 2014, we heard that one of our Navy’s ships, the Kyrenia, would be withdrawn, and we requested to be given to us so as to sink it into our reef for its enhancement. The government accepted our request, and the Department of Fisheries undertook to clean it and prepare it for sinking.

After creating a number of points of reference, and considering the success of our overland sculpture park, in May 2014 we set before the Municipal Council a proposal to create an even more ambitious point of reference: that of an underwater sculpture park. The proposal was approved unanimously, and we entered into deliberations and preparations to explore ways to construct and mature the project.

That is how the first contacts began with the then Minister of Agriculture, Mr Nicos Kouyialis and the Department of Fisheries with whom we analysed our proposal. Initially, the idea was that the park should have links with mythology. Indeed, certain sculptures were created in cooperation with Cypriot artists, which have not yet been sunk.

In June 2014, we commissioned a Spatial Study and Biological Survey for the Creation of a Sculpture Park, which was completed in August 2014 and communicated it to the Department of Fisheries and the Department for the Environment with various queries we had.

In February 2015 we sank the ship Kyrenia, and began the enrichment of the reef.

In May 2017, we visited the Department of Fisheries in order to persuade them to allow us to sink the tanks, and at a meeting with the Director, Ms Marina Argyrou, we put forward once again the idea of creating an underwater sculpture park.  Ms Argyrou suggested that instead of sinking the tanks, we should work intensively on our proposal for an underwater sculpture park and recommended that we send her our suggestions and proposals. Dear Marina, if you had agreed with our recommendation regarding the sinking of the tanks, we would not be inaugurating this ambitious project today.

In May 2017, we sent our analytical proposal, which included 3 suggestions. Our letter began as follows:

"In the framework of upgrading the artificial reef of Ayia Napa, the Mayor of Ayia Napa is proposing to enhance the area in such a way so as to transform it into a unique and original point of reference, and also to enrich the marine life. Based on our proposal, both the interest of volunteers for protecting the reef, as well as the visitors of the reef will increase. In addition, both Ayia Napa and this specific project will gain an international recognition. At the link below, you can see various underwater parks and sculptures on the basis of which we are proposing the enhancement of the artificial reef of Ayia Napa".

The three suggestions of the Municipality were as follows:

The Department of Fisheries agreed and we proceeded with our first suggestion, i.e. to commission the work to a well-known artist. We proposed the artist Jason deCaires Taylor and Mr Yiorgos Payiatas, undertook to contact him on behalf of the Department of Fisheries and the Municipality.  At that point the project began to take on flesh and bones. Jason began to send his proposals in sketches and then he visited Ayia Napa and dived in the artificial reef. The artist was impressed by the clear water and a few days later he sent his final proposal on Reef Reforestation.

A tropical underwater forest completed with modern sculptures. A unique underwater park with a powerful environmental message. A park that will not only attract thousands of visitors but will also enhance biodiversity and restore marine life to the reef.  A park that will make Ayia Napa know all over the world.

In June 2019 we signed the contract, which was supervised by the Municipality’s legal adviser, Antonis Christofi, who devoted a great deal of time to prepare, negotiate, and oversee it.

Immediately afterwards, together with my friend, the Minister of Agriculture, Rural Development and Environment, Costas Kadis, who believed in the project and supported it, we announced the commencement of the implementation of the project.

In order to implement the contract, a committee was then set up to monitor and implement the project, chaired by the late Municipal Engineer and deputy Municipal Secretary, Athos Georgiou, Municipality technician, Melina Georgalli, and Giorgos Payiats on behalf of the Department of Fisheries and Marine Research. These three people devoted endless hours in meetings in order to plan, implement and monitor the contract in particular, I am sure that, wherever he is now, Athos Georgiou will be feeling enormous pride.

In order for the project to be implemented, space had to be found for the artist to be able to work and for the sculptures to be loaded for sinking. This problem was resolved quickly after communication with the people responsible for the Ayia Napa Marina. Stavros Karamontanis and Costas Foitiris responded immediately and granted us space and all other facilities we asked for.

When I was appointed Minister of Transport, Communications and Works in December 2019, Christos Zanettos took over as Mayor. Christos was called upon to handle a difficult situation, since the artist – who in March 2020, in the middle of the Covid-19 pandemic and the lockdown period that was entered into force, was in Cyprus to complete the project by sinking the sculptures – had to return home.  Unavoidably the Covid-19 pandemic delayed the completion of the project for about 18 months. Jason eventually came back in the summer of 2021 and finished the work.

I am proud of the positive outcome of this entire venture, and I would like to thank in particular the Mayor of Ayia Napa, Mr Christos Zanettos, who believed in the project, and we are here today for the opening of MUSAN.

I am proud because during a time of pandemic I can see Ayia Napa evolving into a cosmopolitan tourist resort of the Mediterranean, where visitors can enjoy a full tourist experience.

I am proud that the benefits from the operation of the MUSAN will be great, both for Ayia Napa and government-controlled Famagusta as a whole, as well as Cyprus in general.

Finally, I would like to congratulate warmly all contributors and all those who helped to create this unique underwater museum, which will place Cyprus at the top of worldwide diving tourism. Today’s opening ceremony and the result of all the work performed, is a vindication of the efforts of all of us.

As I said at the beginning, when you are able to dream, you can perform miracles.

Applications for the management of Asgata Postal Agency

Announcement by the Cyprus Post regarding fraud through email