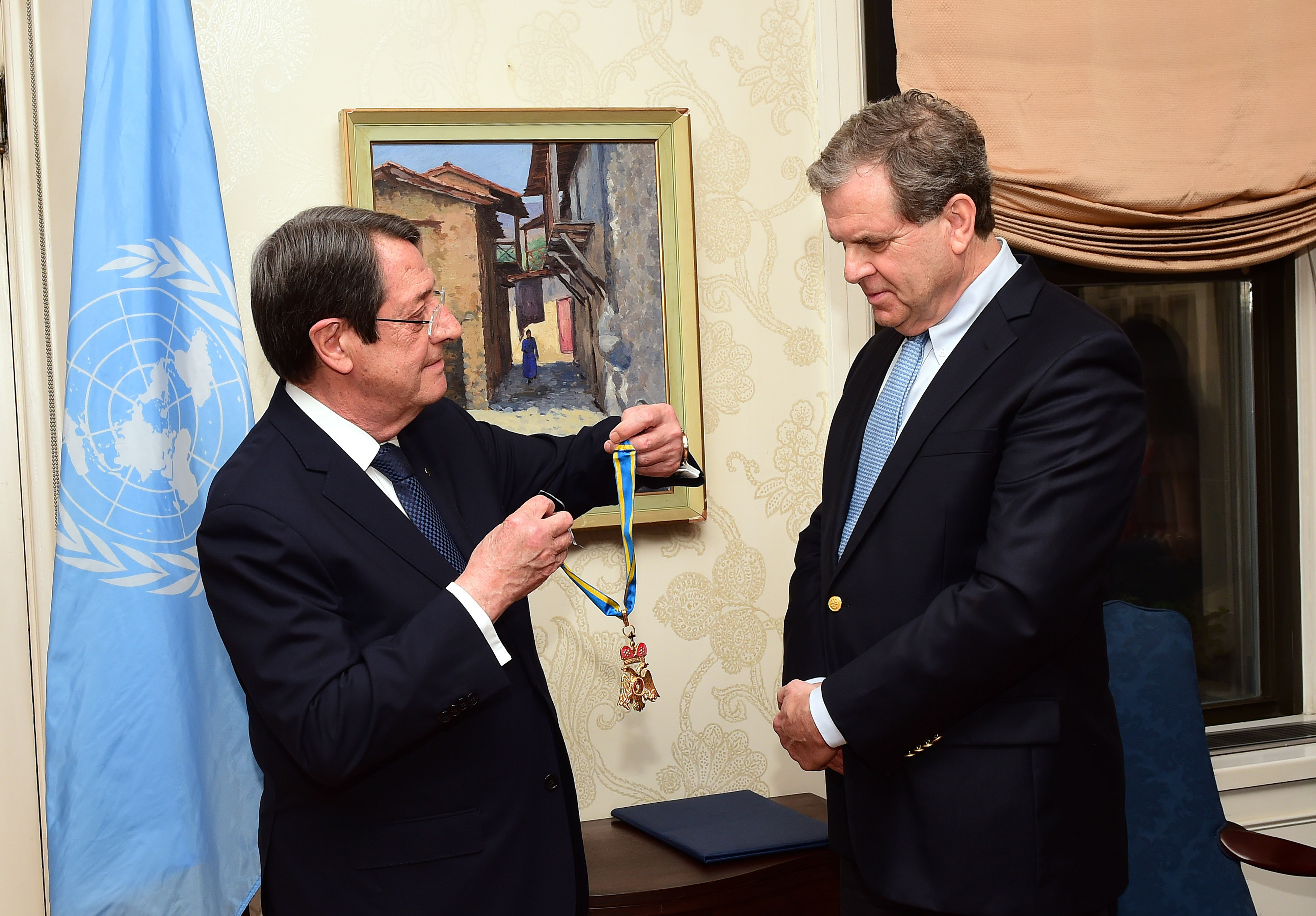 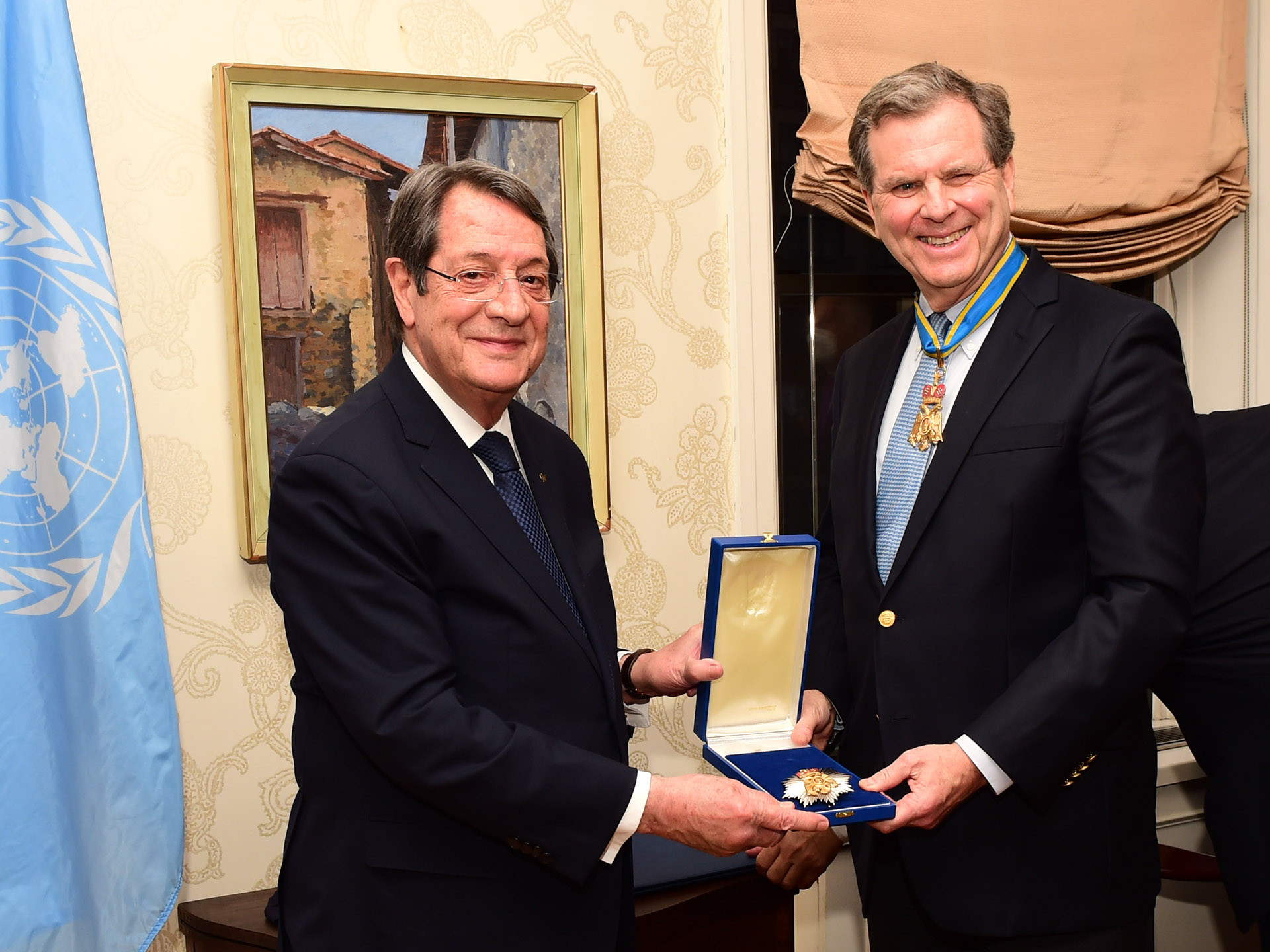 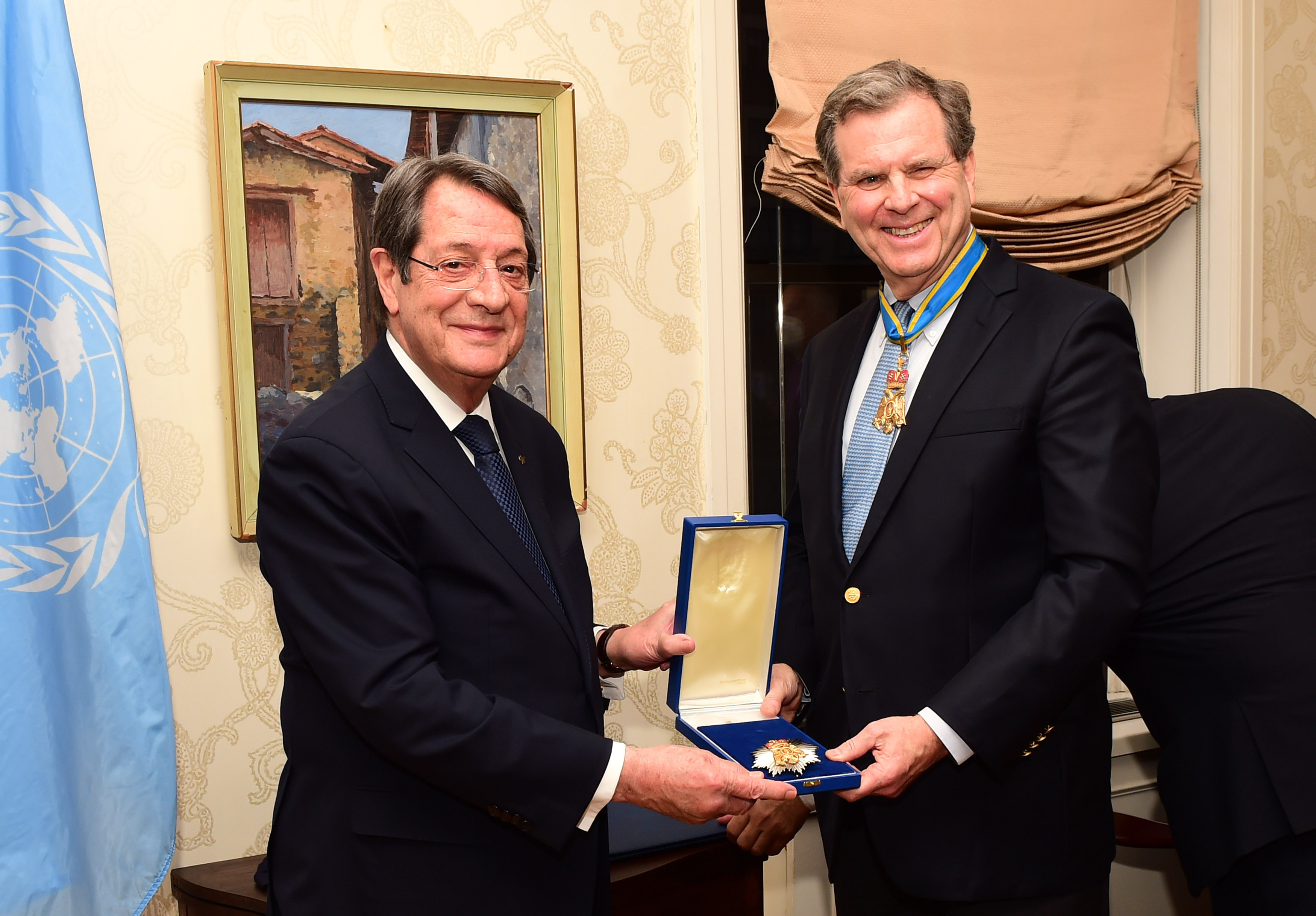 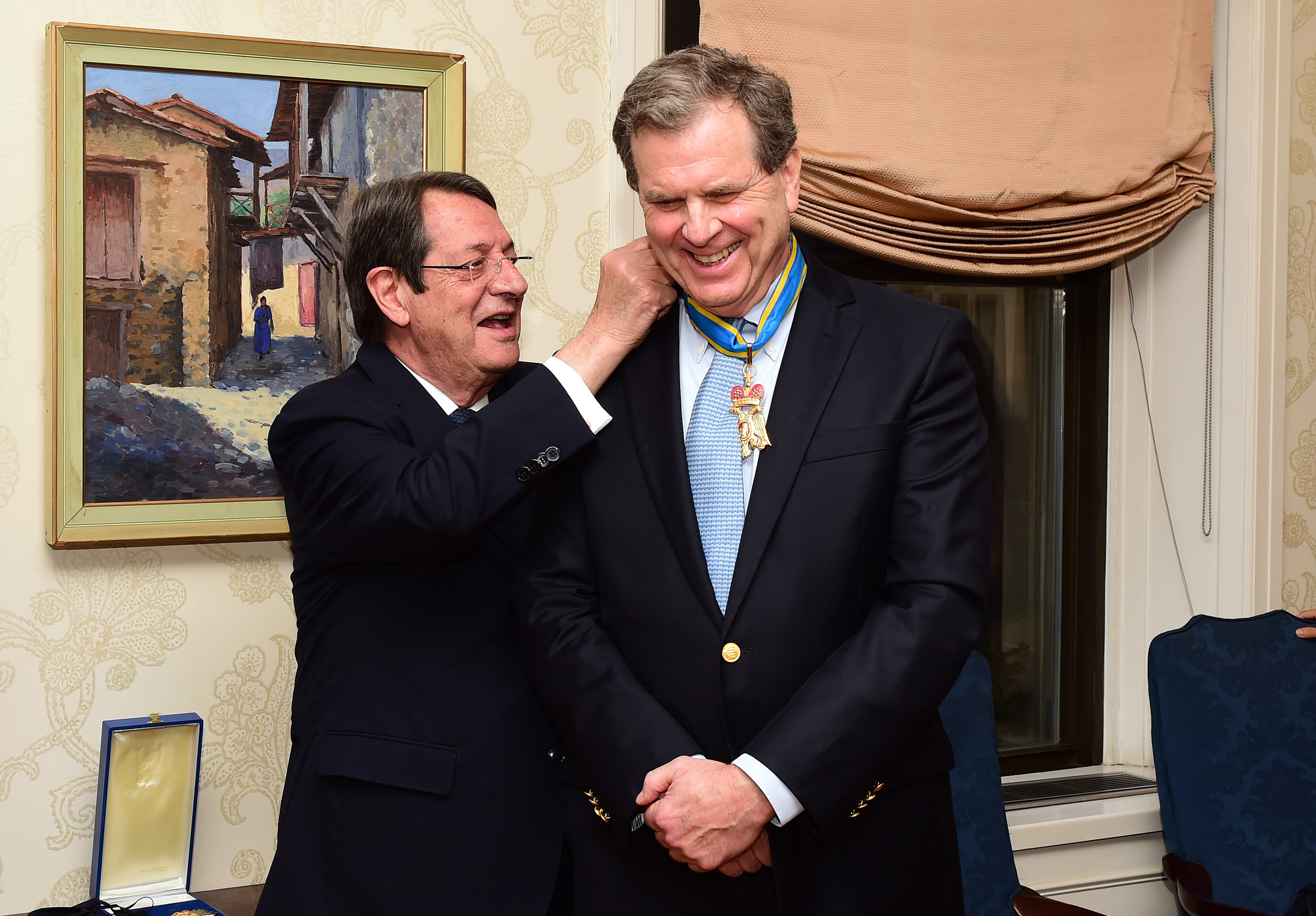 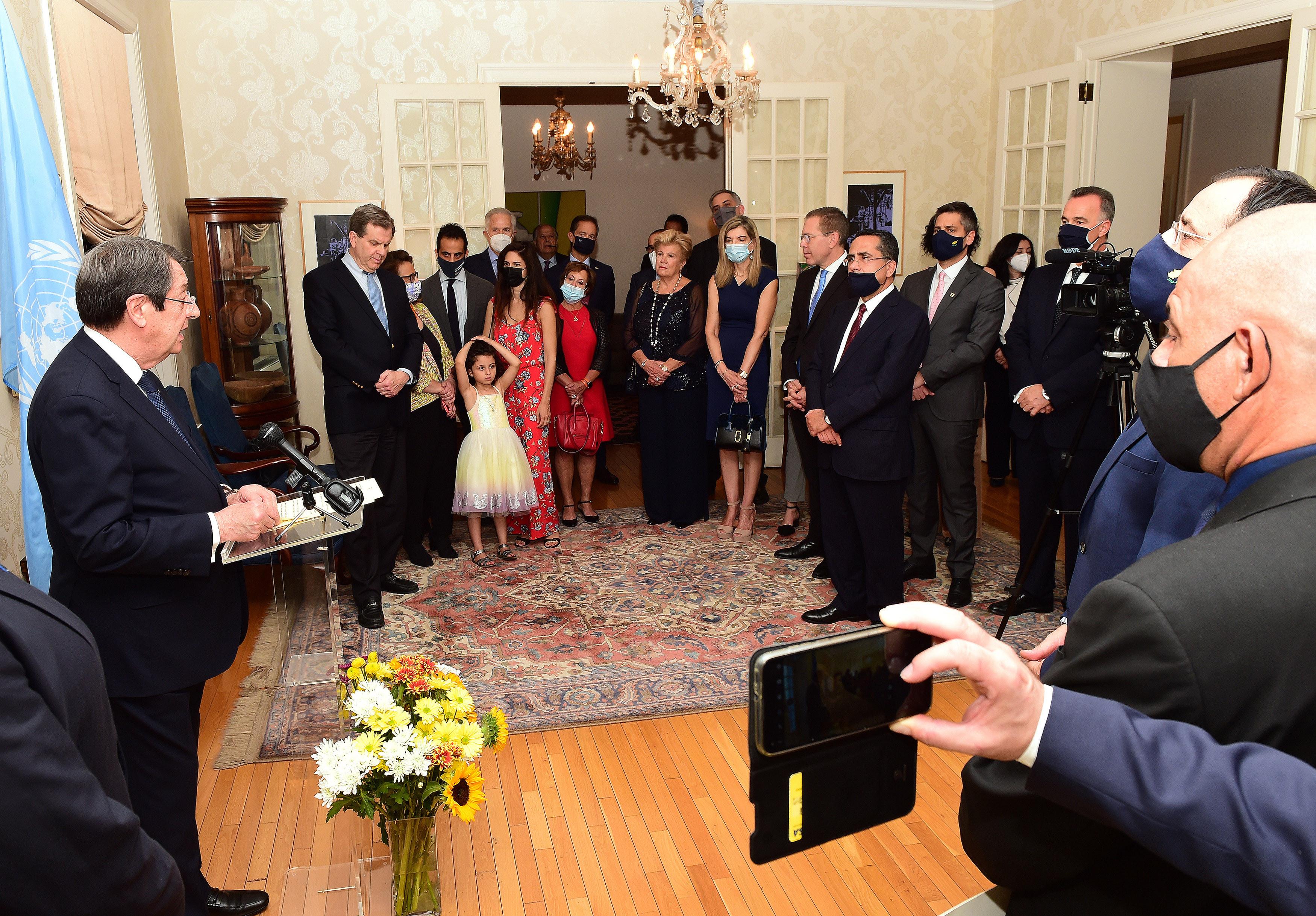 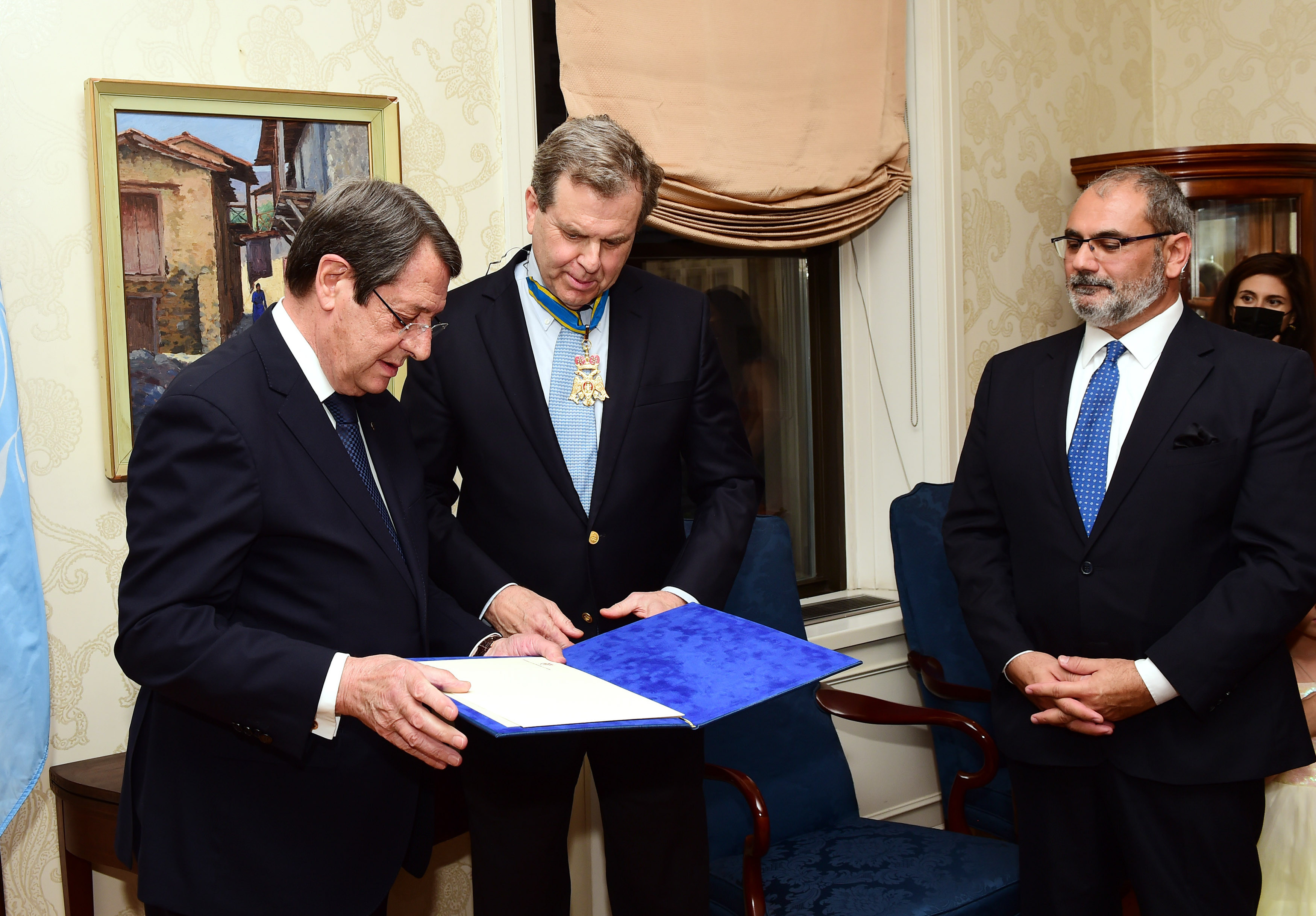 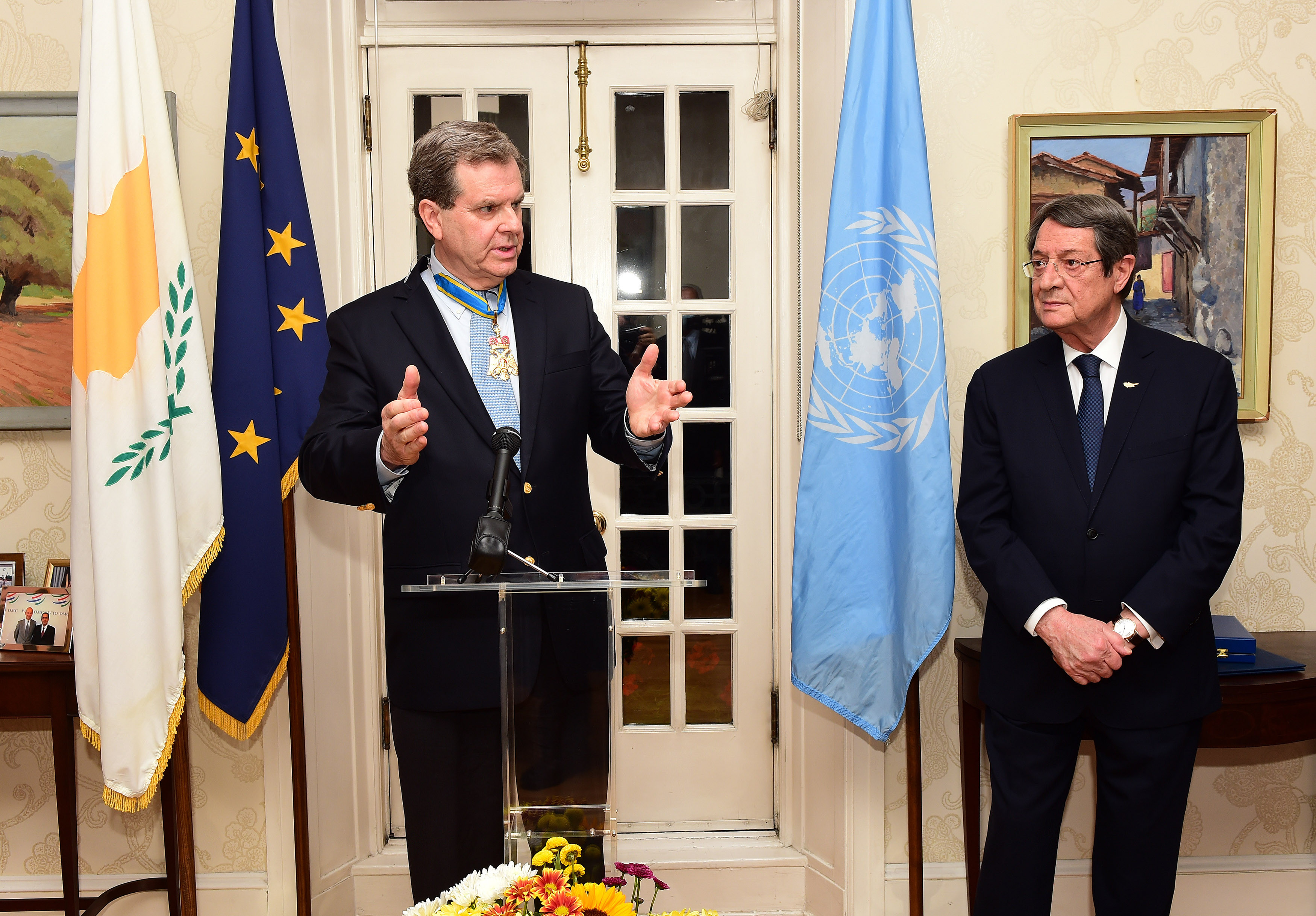 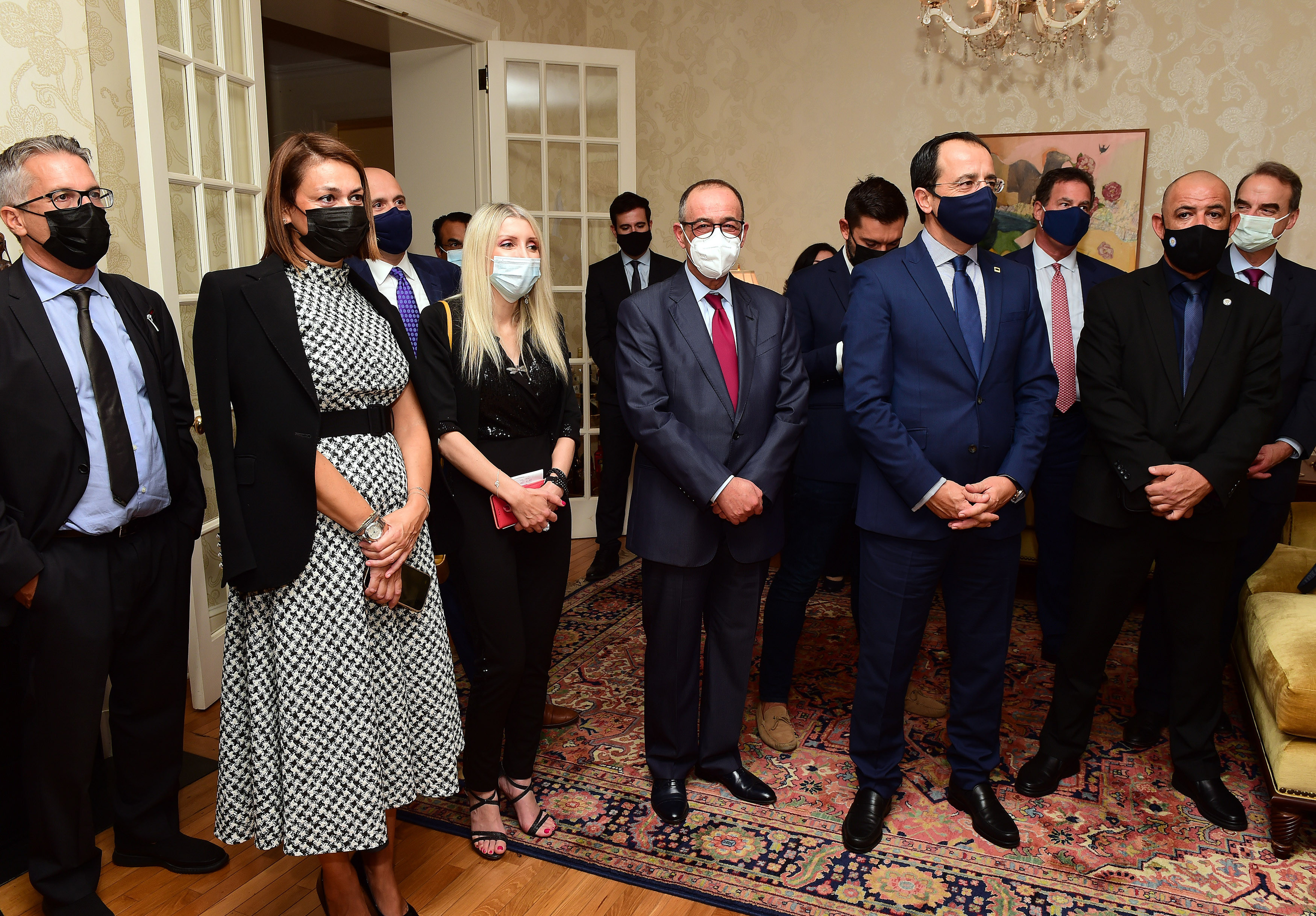 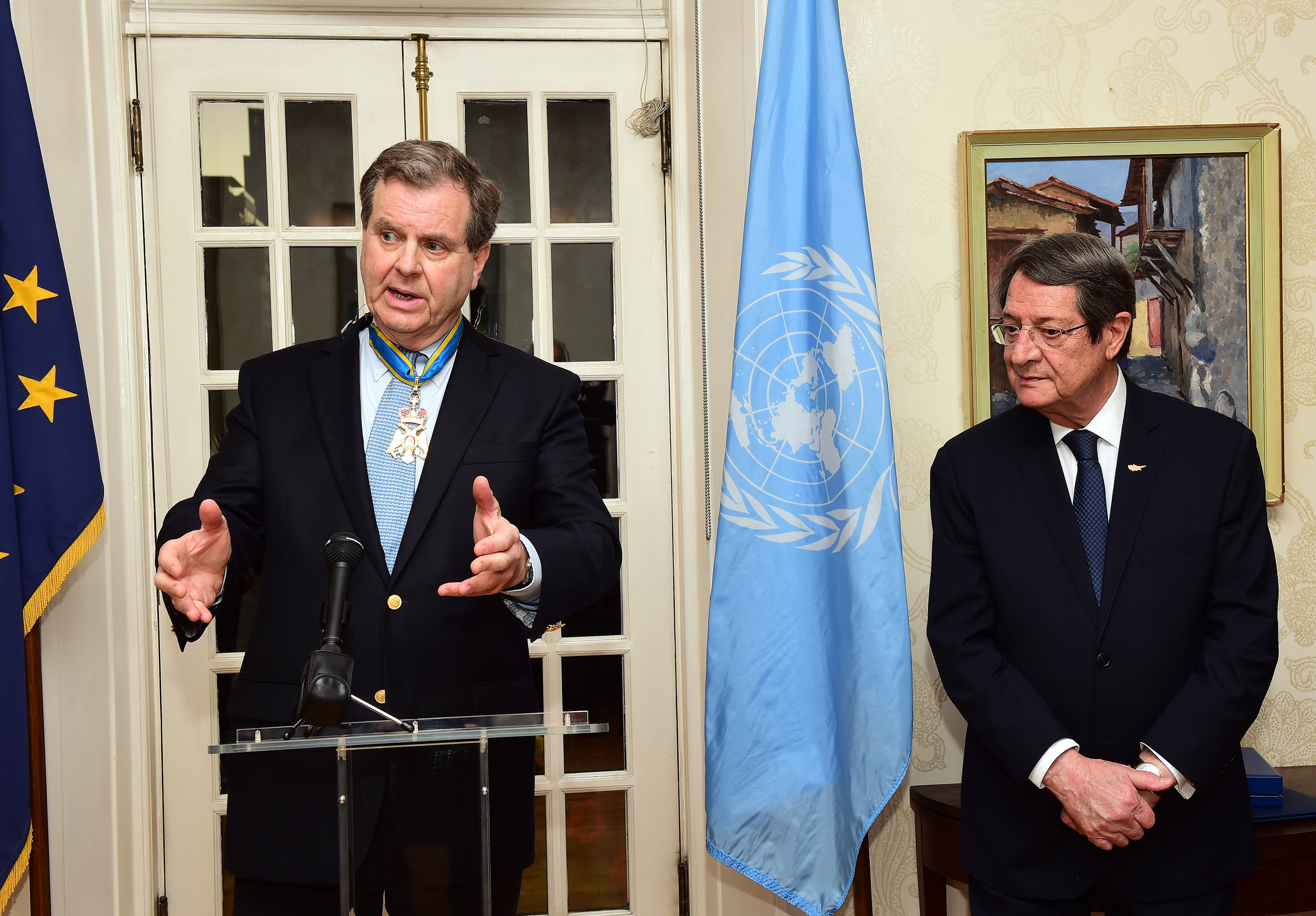 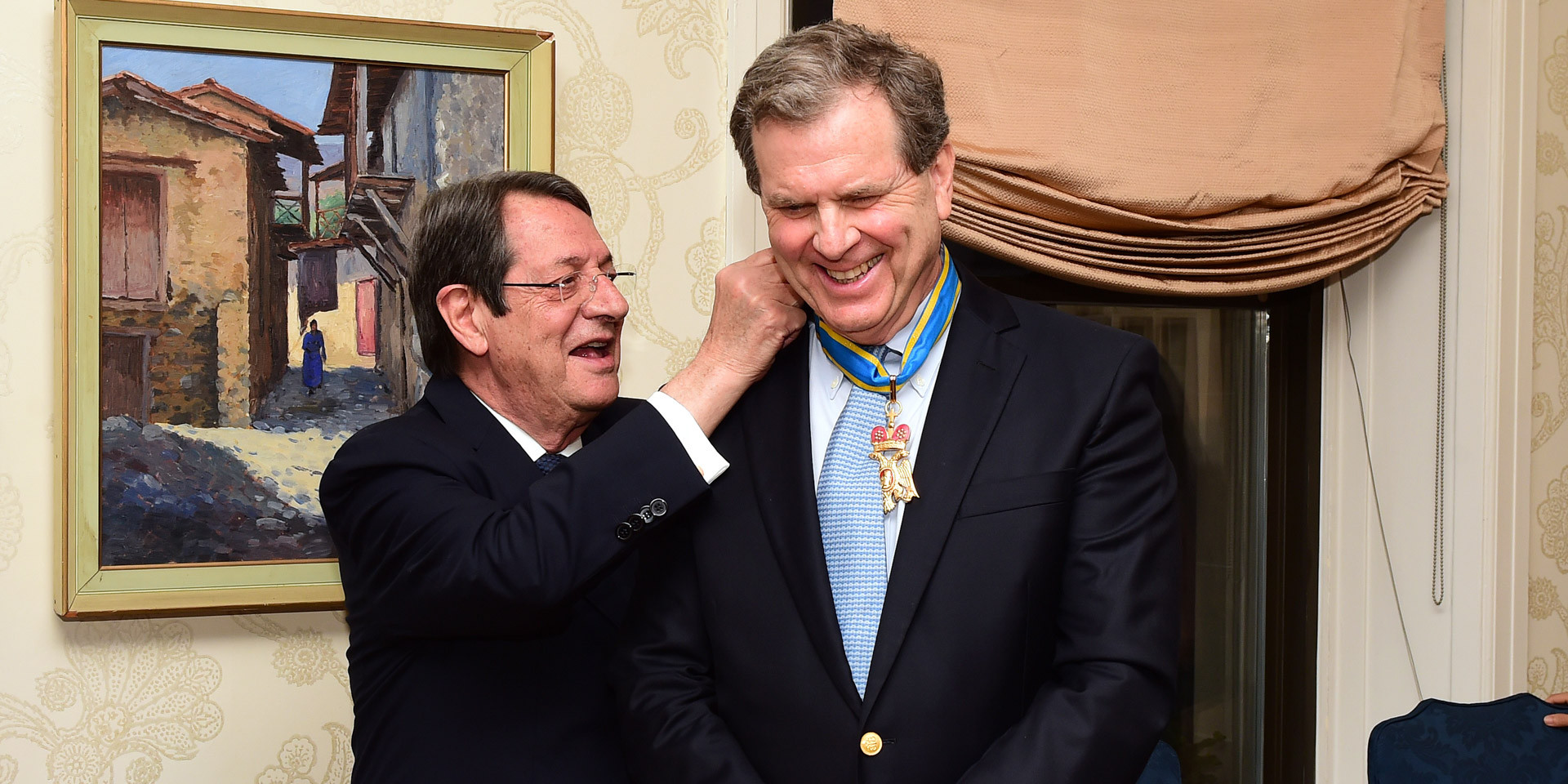 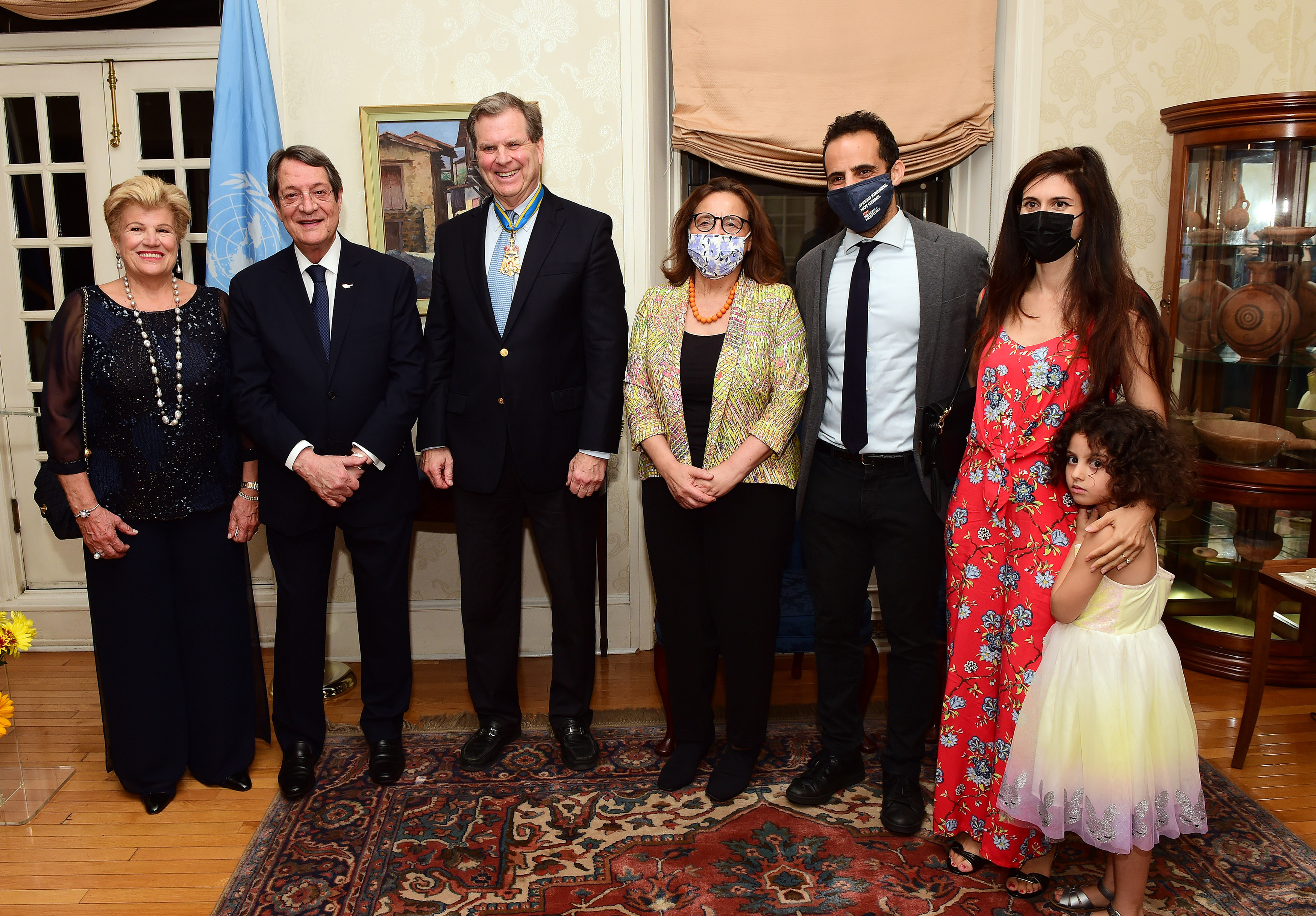 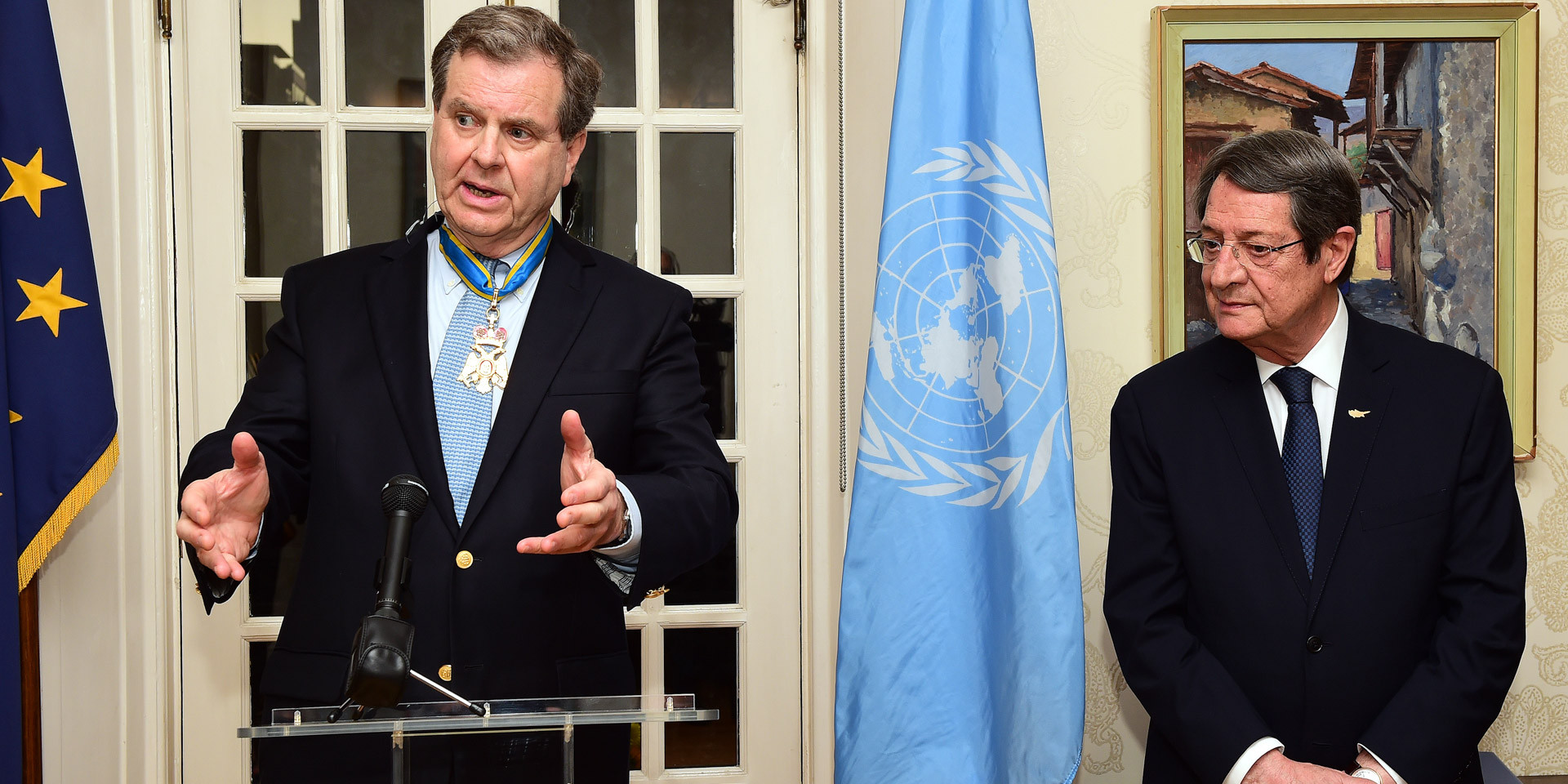 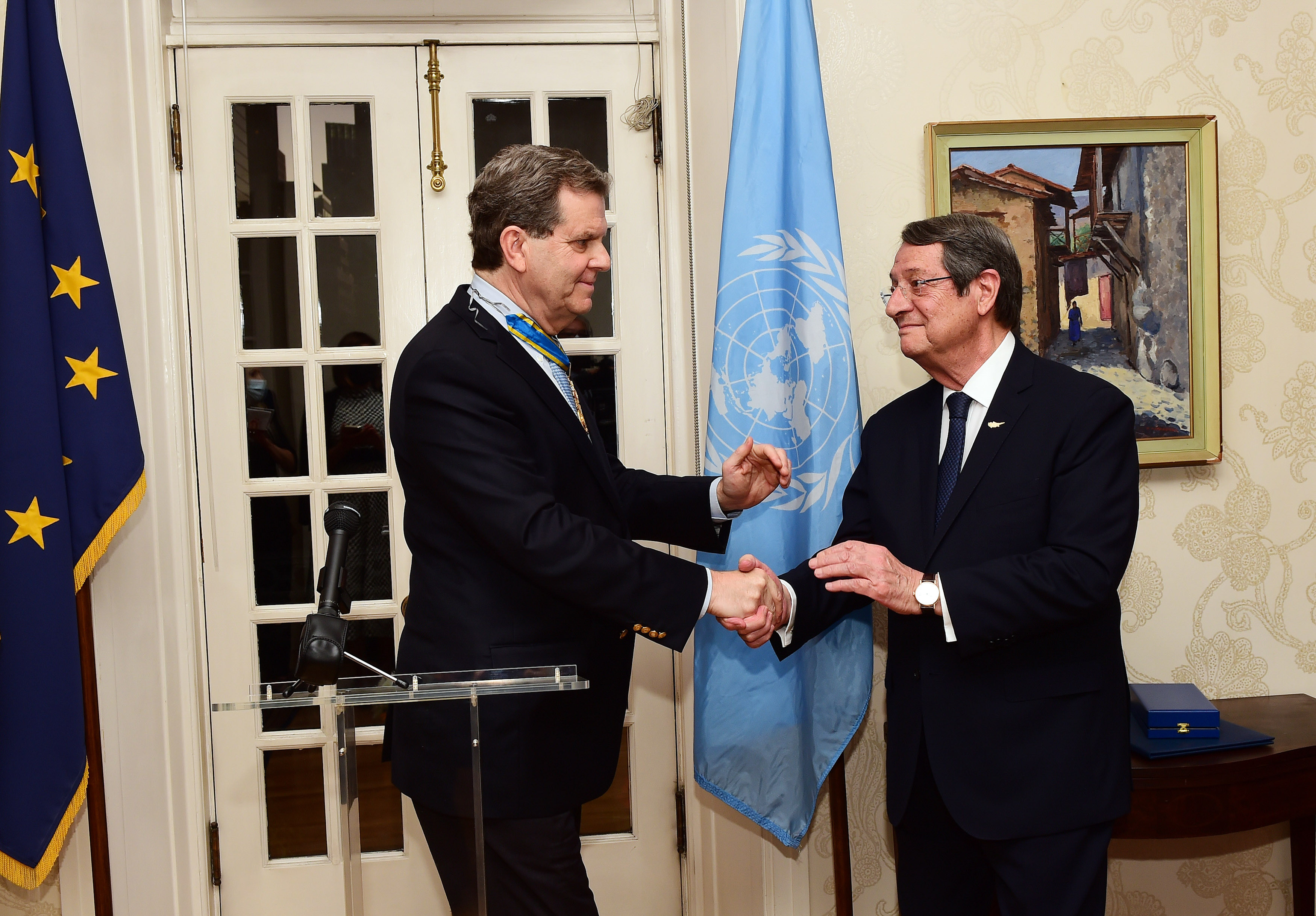 The President of the Republic Mr Nicos Anastasiades bestowed on the CEO of the American Jewish Committee, Mr David Harris, the Medal of the Grand Commander of the Order of Makarios III, at a special ceremony held last night, in New York.

At the ceremony, which took place at the residence of the Permanent Representative of the Republic of Cyprus in the UN, in New York, the President said that “it is with great pleasure that I welcome you to today’s event in honour of the Chief Executive Officer of the American Jewish Committee, Mr David Harris, for his extraordinary work in defense of human rights and dignity around the world, as well as his immense contribution to the enhancement of relations between Cyprus, Israel, Greece and the United States.

My dear friend David: By bestowing you with the Republic of Cyprus’ Medal of the Grand Commander of the Order of Makarios III, please accept the symbolic reciprocation of the feelings of gratitude and appreciation of the Cypriot people.

David Harris, the son of Holocaust survivors, has dedicated his life to the promotion of Jewish interests, with the late Israeli President Shimon Peres describing him as “the foreign minister of the Jewish people”.

An Organisation whose principles are not limited to preserving the memory of the Holocaust and combating intolerance, antisemitism, discrimination and hate speech on the global stage, but are also extended to actively promoting democratic values in the United States and beyond.

And it is no coincidence that the American Jewish Committee has rapidly expanded to 39 regional offices and representatives, establishing 37 partnerships with international Jewish community organizations and, at the same time, maintaining friendly relations with more than 110 governments around the world.

It should be emphasized that David Harris is also genuinely passionate about forging lasting peace in the Middle East, through advocating enhanced cooperation, integration and trust-building amongst the countries of the Eastern Mediterranean, as per the example of the signatories of the Abraham Accords, in full respect of human rights and the rule of law.

Neither this list of accomplishments, nor his impressive career, captures the full measure of David Harris.

Those who are privileged enough to know the person behind David, can attest to the man’s honesty, integrity, mental sharpness and results-oriented approach.

Above all, Mr Harris is a fervent advocate of the merits of a just world between all nations, irrespective of their size.

As he eloquently once wrote: “Only the combined strength, solidarity, and clear-eyed resolve of democratic nations, institutions, and individuals of goodwill can chart the way to the age-old vision of a world at peace and in harmony.”

As I already mentioned in my introductory remarks, David’s commitment to defend human dignity and promote peace in the wider Middle Eastern region is unparalleled.

That is why, guided by this belief, Turkey’s human rights abuse in Cyprus could not have gone unnoticed by David Harris.

Ever since the military invasion of Turkey in 1974, Mr Harris never shied away from condemning not only Turkey’s actions, but also all those who, based on their own interests, turn a blind eye at the unacceptable status quo in Cyprus.

As he said - and I quote: “Turkey, to take just one example, has brazenly and illegally occupied more than one-third of the island nation of Cyprus for 46 years, deployed an estimated 40,000 Turkish troops there, and transferred countless settlers from Anatolia, yet not a peep about Ankara from those who purport to act in the name of “justice” and against “occupation.”

And, of course, as a man of principles, David did not hesitate to immediately condemn Turkey’s illegal and aggressive actions in the Eastern Mediterranean, including the repeated intrusions of the Cypriot Exclusive Economic Zone, the intention to change the status of part of the fenced city of Famagusta, as well as the Turkish irrational position for a two-state solution, outside the UN parameters.

Furthermore, he has been working tirelessly not only in materializing the trilateral partnership between Cyprus – Greece – Israel, but also in constantly and persistently strengthening it.

To this end, I wish to extend our sincere appreciation to Mr Harris’ important contribution in advancing the East Med Partnership Act in the United States Congress.

An act with profound geopolitical meaning, as it establishes the institutional framework for energy and security cooperation between the United States, Cyprus, Israel and Greece.

Winston Churchill once very acutely stated: “A nation that forgets its past has no future.” He also described Greeks and Jews with the following: “No two races have set such mark upon the world...They have survived in spite of all that the world could do against them, and each of them from angles so different have left us the inheritance of their genius and wisdom.”

These words, dear David, touch upon a key characteristic of our nations and peoples: Resilience in the face of adversity, coupled with a unique bond of compassion rooted in the depth of history.

And I have no doubt that these characteristics and our steadfast commitment to the rule of law, human rights and in achieving enduring peace will continue guiding the partnership between Cyprus and Israel and between the American Jewish Committee and the Republic of Cyprus and its diaspora.

So as hope to prevail over despair, justice over injustice.

It is for these above-mentioned reasons and in recognition of Mr David Harris’:

→        Strong defense of human rights, the rule of law and his endless support for the just cause of the Cypriot people.

→        Long-standing support in advancing the bilateral relations between Cyprus and Greece with Israel and the United States,

That I am bestowing him with one of the Republic of Cyprus’ highest orders of merit.

In concluding, please allow me to convey once more my sincere appreciation and gratitude to David, who will be gravely missed when he steps down from his esteemed position next year.

On his part, Mr Harris said, among other things, that “most importantly I would like to express my sincere and heartfelt thanks to my dear friend President Anastasiades, someone I look to for leadership and inspiration”, adding that he cherishes their relationship.

He also thanked the Foreign Minister of Cyprus, Mr Nikos Christodoulides, “a long-time friend, partner and colleague with whom I had a fruitful meeting” earlier today.

Referring to the Cyprus problem, Mr Harris said that “we believe we have to build bilateral and multilateral mechanisms, in our estimation beginning with Energy, Electricity and Environment, and create a new model for what is possible in the region. A model so successful that other countries in the region that are watching would want to join, who would say ‘we don’t want to be left behind with many evil extremists who want to sow the seeds of conflict. We want to sow the seeds of coexistence.

We want to send a message to the regional predators, including those who continue to occupy more than a third of Cyprus, that theirs is not the path of the future. Ours is the path of the future. And Cyprus, Israel and Greece are engines of this train. And others have joined this train, and there are still more countries that can be added to the train and more topics that can be added to the agenda of this train.”

He also spoke of his love for Cyprus, the Hellenic culture and how much it has formed him as an individual.

Concluding, Mr Harris said that “there is no limit to what we can achieve together.”