The Department of Antiquities, Ministry of Transport, Communications and Works announces that on the World Alzheimer's Day, celebrated each year on September 21, will light up the Pafos and Larnaka Castles in purple.

The main goal of World Alzheimer's Day is to raise public awareness about the disease, but also to awaken and mobilize the State. The Department of Antiquities, wishing to contribute to this goal, while expressing solidarity with our fellow people who suffer from this disease, will proceed with the lighting of the two Castles.

Alzheimer's disease is the most common form of dementia and is a major medical, social and economic problem for developed societies with high life expectancy. The term "dementia" refers to the deprivation of mental functions, first that of the memory and then of speech, judgement and personality in general and is a disease that affects every family and the entirety of society. We hope that through awareness-raising movements, the health care and attention for all those affected by the disease will be improved and a message of support will be sent during this particularly difficult time for the entire society and especially for vulnerable people. 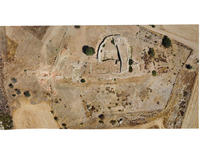