Address by the Deputy Government Spokeswoman Ms Niovi Parisinou on behalf of the President of the Republic, at the 4th BPW Mediterranean Symposium

It is with great pleasure that I attend the opening of the 4th Mediterranean Symposium, which is organized for another year, at the initiative of the Cyprus Federation of Business and Professional Women Cyprus.

I would like first of all to convey the cordial greetings and wishes for every success of the President of the Republic, Mr Nicos Anastasiades, who due to prior commitments could not be with us here today.

The Mediterranean Symposium, which is evolving into an important annual institution in our country, is held on the occasion of the International Women’s Entrepreneurship Day, in order to strengthen and support the equal and dynamic participation of women in business activity and training. The invitation and the representative participation of delegates and important personalities from Mediterranean countries and the wider region, proves the importance attached to the whole event, which constitutes a bridge of communication and constructive dialogue between women of diverse interests, who are active in various fields.

In the face of the multiple challenges of our time, the Cyprus Federation of Business and Professional Women Cyprus develops a rich and active stance, aiming primarily at creating better conditions in a society that respects human rights and promotes equal opportunities, ensuring the evolution and development of women in their working environment but also more widely in their personal recognition.

This year's Symposium is expected to give rise to a fruitful exchange of views, discussion and reflection on key issues that concern entrepreneurship and the decisive contribution of women to it.

I would like to take this opportunity to mention that the Government welcomes this important initiative of BPW Cyprus, and the wider work it has been doing all these years. At the same time, I would like to assure you of the Government’s practical and organized efforts to ensure increased employment of women in the labour market, the protection of their labour rights and retirement conditions, as well as their training and the subsidizing of youth and female entrepreneurship.

Indicatively, I would like to mention the important decision to adopt the National Action Plan for Equality between Men and Women 2019-2023, by the Council of Ministers in September 2019; A project with clear objectives and implementation timetables, which aims at fostering a culture of equality, by deconstructing established social stereotypes and perceptions of the roles of men and women.

Furthermore, recognizing the need for meaningful action to reduce the gender pay gap, the Ministry of Labour, Welfare and Social Insurance, has designed and implemented relevant actions leading in 2017, to a reduction in the pay gap percentage in Cyprus of 13.7% compared to the EU average of 16%.

At the same time, Cyprus ranked 5th in 2017, among countries that achieved the largest percentage reduction in the gender pay gap in the period 2010-2017, despite the economic crisis and despite the implementation of a strict economic adjustment program.

In addition, we attach great importance to the issue of preventing and combating gender-based violence, indisputably condemning all forms of violation of women's rights.

The support of the Government is granted, as we seek to take concrete measures to encourage and promote female entrepreneurship and the unlimited potential and prospects it can create in the social and economic development of the country.

In conclusion, I would like to warmly congratulate the Cyprus Federation of Business and Professional Women Cyprus for this excellent event, the conclusions of which we will be looking forward to with great interest. I also extend my warmest congratulations to the speakers and attendees, who, with their participation demonstrate their genuine willingness to proceed with changes, that signal a fairer, more meritocratic and more democratic society for all. 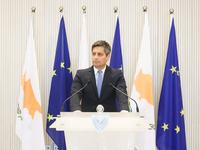 The deliberations of the World Conference of Overseas Cypriots began