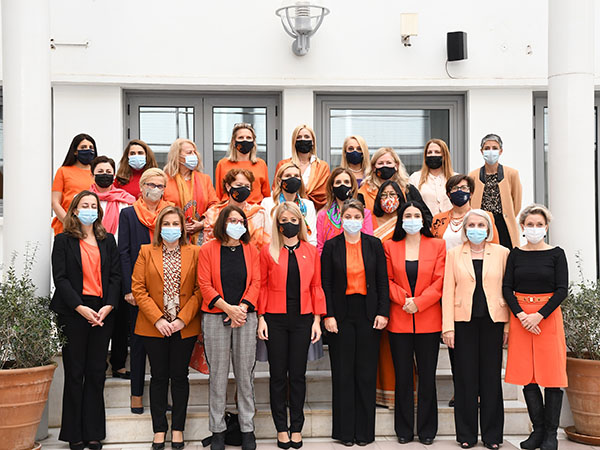 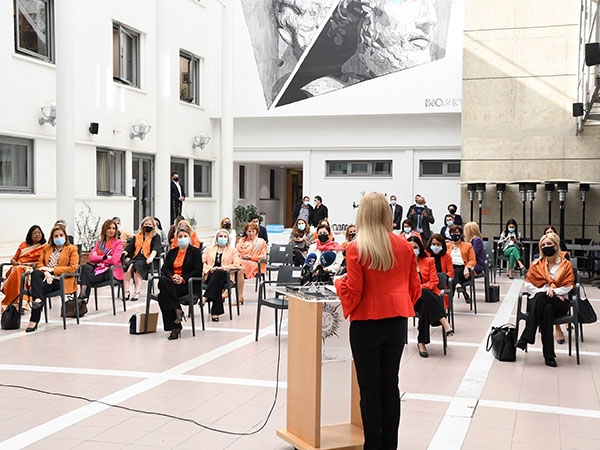 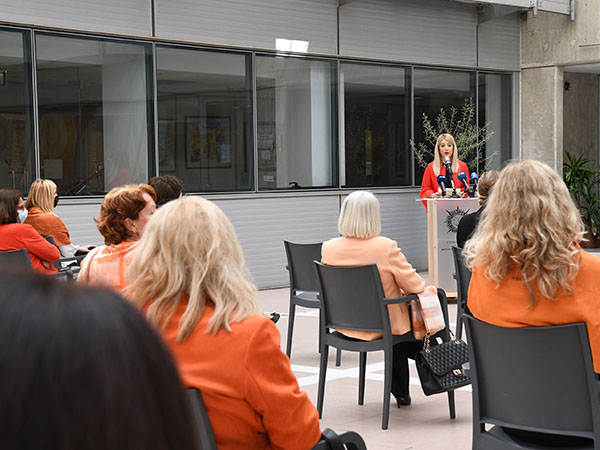 Address by the President of the House of Representatives, Ms Annita Demetriou, at the event held on the “Orange the World: Fund, Respond, Prevent, Collect!” initiative

I welcome you to the House of Representatives and thank you warmly for accepting the invitation for this event, which is taking place for a cause of utmost significance in today’s society. The UN Secretary General’s campaign “UNiTE by 2030 to End Violence against Women” is a commendable initiative for the support of women’s rights and the goal of eradication of gender-based violence. The campaign marks the 16 Days of Activism against Gender-based Violence, running from the 25th of November to the 10th December under the global theme “Orange the World: Fund, Respond, Prevent, Collect!".

Only during the past decades, we have started acquiring a better understanding of the several dimensions that gender has. Gender stereotypes have shaped – mostly in an unfair manner – social and political life. We cannot delay any further, the elimination of these stereotypes. We need to work together in solidarity to ensure gender equality and security for all citizens, both in principle and in practice.

The matter of women’s rights touches me, and I believe all of us present here today, on a personal level as well. We are all committed to address this issue through our different capacities and positions. As the first woman President of the House of Representatives of the Republic of Cyprus, I have set gender equality and the rights of women and girls very high in my agenda and I am thankful to my colleagues for being here today, supporting me fully in this scope.

It is time to talk openly and to be proactive on the issue of gender-based violence. In this respect, the initiative “Orange the World” is an excellent opportunity to raise awareness, to mobilise society and stakeholders to take a stance against such deplorable phenomena that need to be eradicated from our society.

Unfortunately, gender-based violence has a negative effect on democratic institutions, through the creation of a climate of intimidation of women engaged in politics and civil life. What is more, the ongoing pandemic has exacerbated, on a global scale, incidents of gender-related violence. Domestic violence is on the rise, with adverse effects for women and children, while violent crimes towards women have also increased significantly in number.

Awareness raising is important in two respects. Firstly, we must lead by example. As women who are in public service and actively engaged in politics and civil life, we can disseminate the message that women not only have a voice, but above all the power to bring about constructive and decisive changes for the positive development of societies.  Secondly, we must make abundantly clear that violence incited by gender-based motives cannot, and shall not, be tolerated in the modern-day world.

An important tool in all these efforts has been the Council of Europe’s Convention on preventing and combating violence towards women and domestic violence (the Istanbul Convention). The Convention was ratified by Cyprus and put into effect in 2018.  As you are well aware this constitutes the most comprehensive, legally binding international instrument focused on preventing domestic violence, protecting victims and prosecuting accused offenders. Its ratification has paved the way for a better coordinated response to these phenomena and we should all strive to ensure that no country desists from its contractual obligations in this regard.

However, Cyprus remains relatively low in the rankings of the EU’s Gender Equality Index, which is indicative of the necessity to improve women’s representation in politics, leadership and decision-making positions.

The House of Representatives has been involved in specific initiatives and activities in the context of promotion of gender equality and the protection of women’s rights. Along with my colleagues in the House of Representatives, and particularly the women Members, most of which are present here today, we are continuously working with determination to promote gender equality, to ensure that women and girls are empowered, and to raise awareness regarding gender-based discrimination and violence.

Important steps have been taken in the legislative field. I am honoured to say that I was among the MPs who tabled the legislative proposal that led, in 2020, to the passage of the Law on Combating Sexism and Sexist Behaviour that criminalises sexist acts as well as online sexism.

In Spring 2021, two further, significant legislative acts were promulgated: the Law on the Protection from Harassment and Stalking that establishes a comprehensive framework in civil and criminal law regarding the said phenomena of harassment and stalking and the Law on the Prevention and Combating of Violence against Women and of Domestic Violence that harmonises Cyprus with the provisions of the Istanbul Convention. The Law addresses offences of a wide nature including physical, psychological and financial violence, as well as the dissemination of sexual and pornographic material. What is more, the Law aims at acting preventively and focuses on education, training and awareness-raising among professionals.

We have also observed a sharp increase in femicide cases worldwide. In response to this increasingly worrying phenomenon, noted in Cyprus as well, I have proposed legal reforms that will lead to the introduction of the criminal offence of femicide. The reform aims at enhancing the protection that women and girls are afforded by the law, while also illustrating the severity of such offences that constitute acts of violence towards women.

Parliamentary diplomacy, as we all know, is essential in promoting human rights and particularly women’s issues. In this framework and in response to the recent escalation of violence towards women in Afghanistan, following the Taliban’s return to power, I addressed a letter to Presidents of Parliaments and International parliamentary organisations, urging them for joint action to protect the human rights of Afghan citizens, especially those of women and young girls, and to provide humanitarian assistance to them.

Moreover, during the 13th Summit of Women Speakers of Parliament 2021 of the Inter-Parliamentary Union, that took place in Vienna in September, I had the chance to exchange views with my counterparts, regarding women’s issues, including combating violence and gender equality. Also, in the framework of the European Conference of Presidents of Parliaments of the Council of Europe held in Athens in October, I had a productive discussion with my counterparts on the matter of enhancement of women in leadership positions in times of crisis.

As the House of Representatives, we are fully committed to the goal of achieving substantive gender equality and eradicating violence against women and girls. We are ready to contribute effectively, both domestically as well as at the international level, to promoting women’s rights. We must all stand united, regardless of our gender, sexual orientation, age or origin, to ensure that violence, abuse and inequalities are eradicated from today’s society.

It is my firm belief that together we can achieve more. I am confident that the “Orange the World” initiative will be the beginning of a close cooperation among us, to raise awareness on women’s rights and work collectively towards reaching the goal of eradication of gender-based violence.

Thank you for being here today and for your attention.