Recent News
European COVID-19 Digital Certificate including booster dose for Turkish Cypriots
Rapid Antigen Testing Units – 20 January 2022
Price Index of Construction Materials: December 2021
COVID-19: latest safety data provide reassurance about use of mRNA vaccines during pregnancy
Photo Album - PoR – Meeting of the Council of Ministers
The Council of Ministers approved the new Action Plan for the smooth operation of flights and the operation of airports
European COVID-19 Digital Certificate including booster dose
The use of EUDCC certificates is temporarily revoked for persons who have tested positive to COVID-19
Reference to the Cyprus problem during UN press briefing
Photo Album - PoR – Meeting on Justice Reform

The Council of Ministers approved today the proposal submitted by the Minister of Energy, Commerce and Industry regarding the licensing of Block 5 of the Exclusive Economic Zone (EEZ) of the Republic of Cyprus to the consortium of ExxonMobil Exploration and Production Cyprus (Offshore) Limited (operator, participation 60%) and Qatar Petroleum International Upstream LLC (participation 40%).

Additionally, the Minister of Energy has been authorized to sign, on behalf of the Government of Cyprus, the Exploration and Production Sharing Contract that has been agreed following intensive negotiations with the consortium, in a ceremony that will take place in Lefkosia in the coming days.

The licensing of Block 5 was achieved in accordance with the provisions of the Hydrocarbons (Prospection, Exploration and Exploitation) Law, according to which the Council of Ministers may, due to geological and production considerations, grant authorisation for the exploration of an area to the holder of a license for a contiguous area. As a result, in June 2021, the Minister of Energy, Commerce and Industry invited the consortia of companies Eni/TotalEnergies (Licensees of the contiguous Block 6) and ExxonMobil/Qatar Petroleum (Licensees of the contiguous Block 10) to submit applications for the granting of an exploration license for Block 5.

During this procedure, an application was submitted by the consortium of ExxonMobil/Qatar Petroleum, which after being evaluated by the competent Advisory Committee, led to detailed negotiations between the consortium and the Minister of Energy, as well as a number of technocrats and the technical advisers of the Ministry. The negotiations were successfully completed in mid-November. 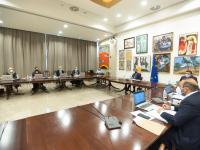