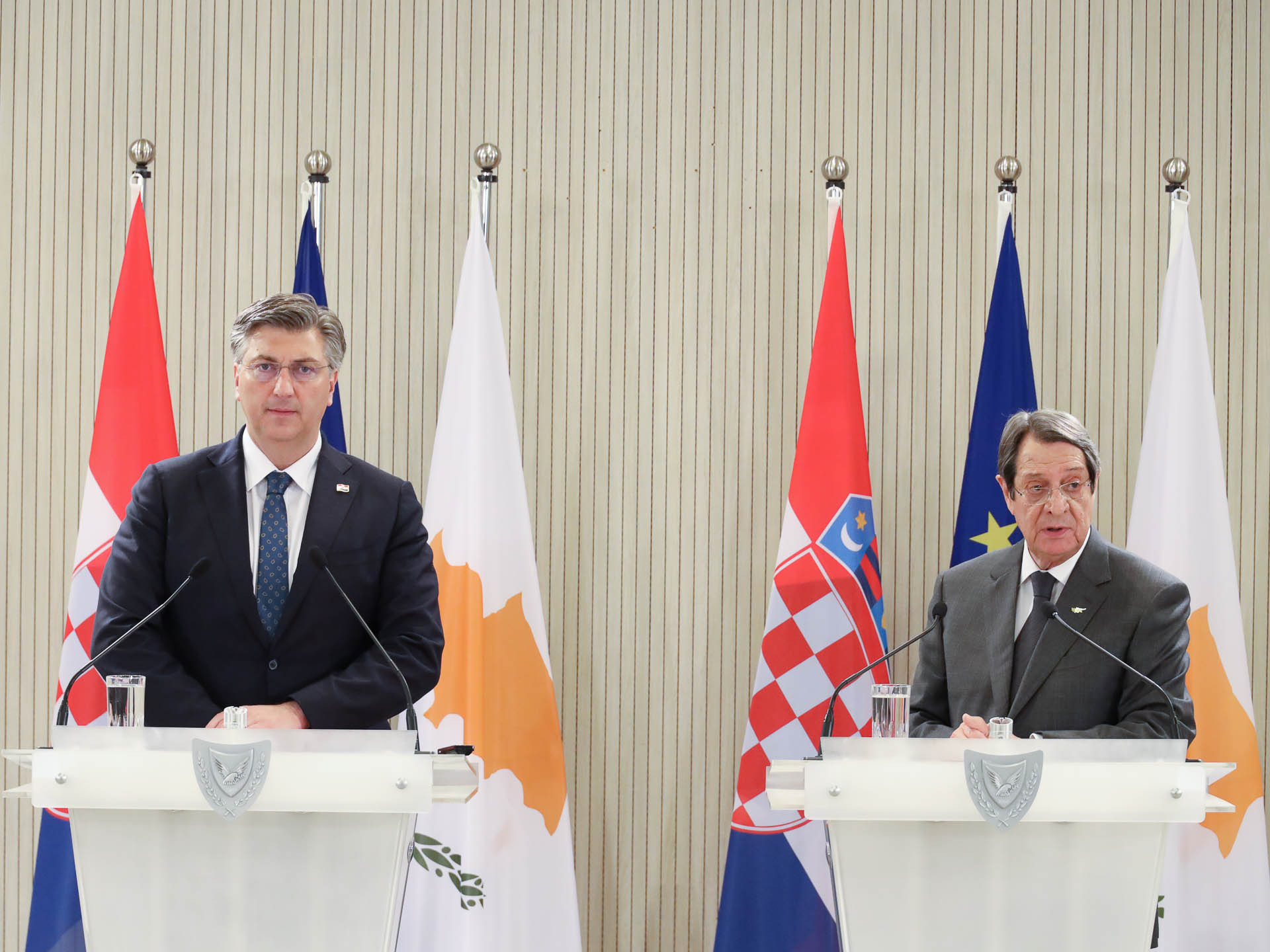 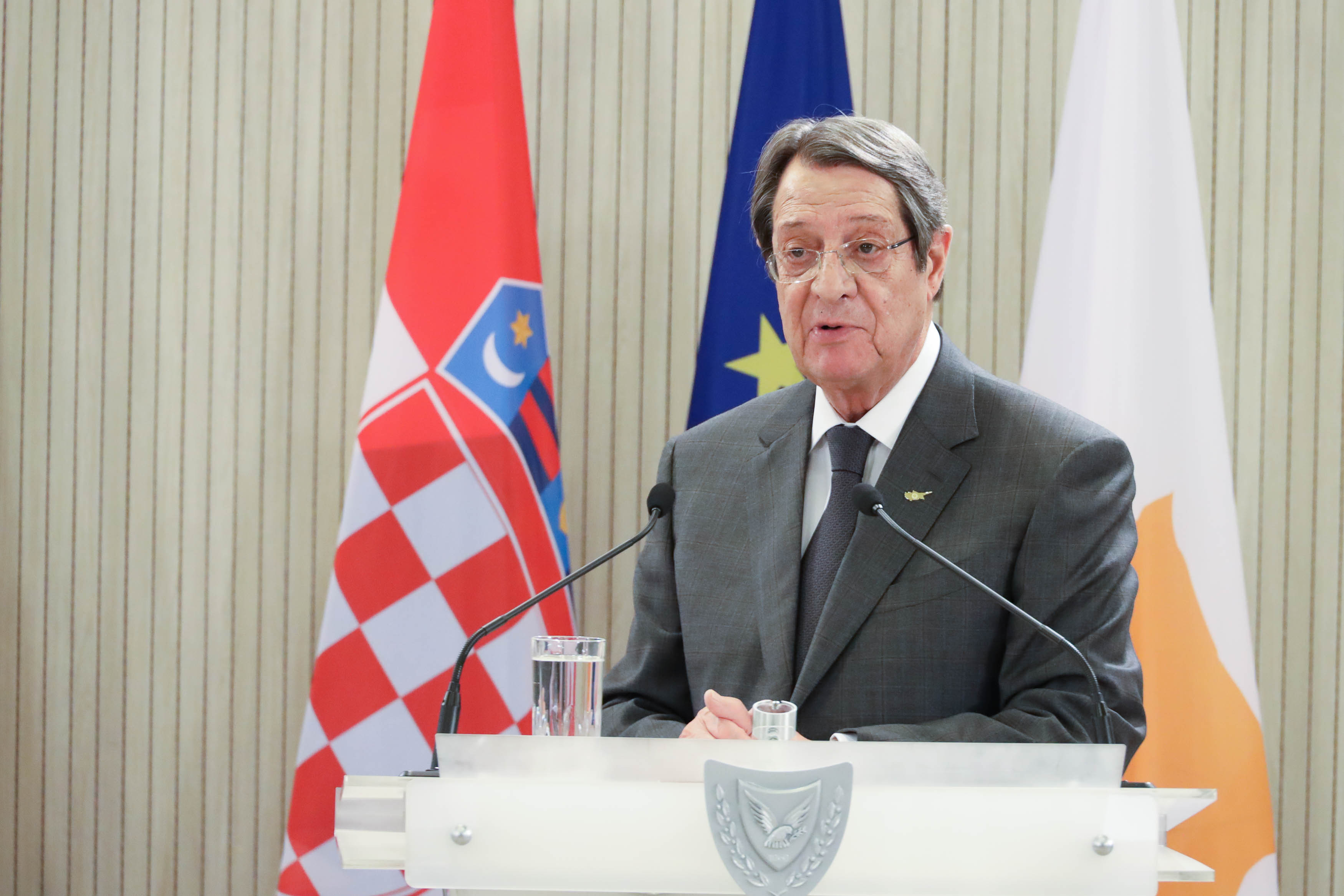 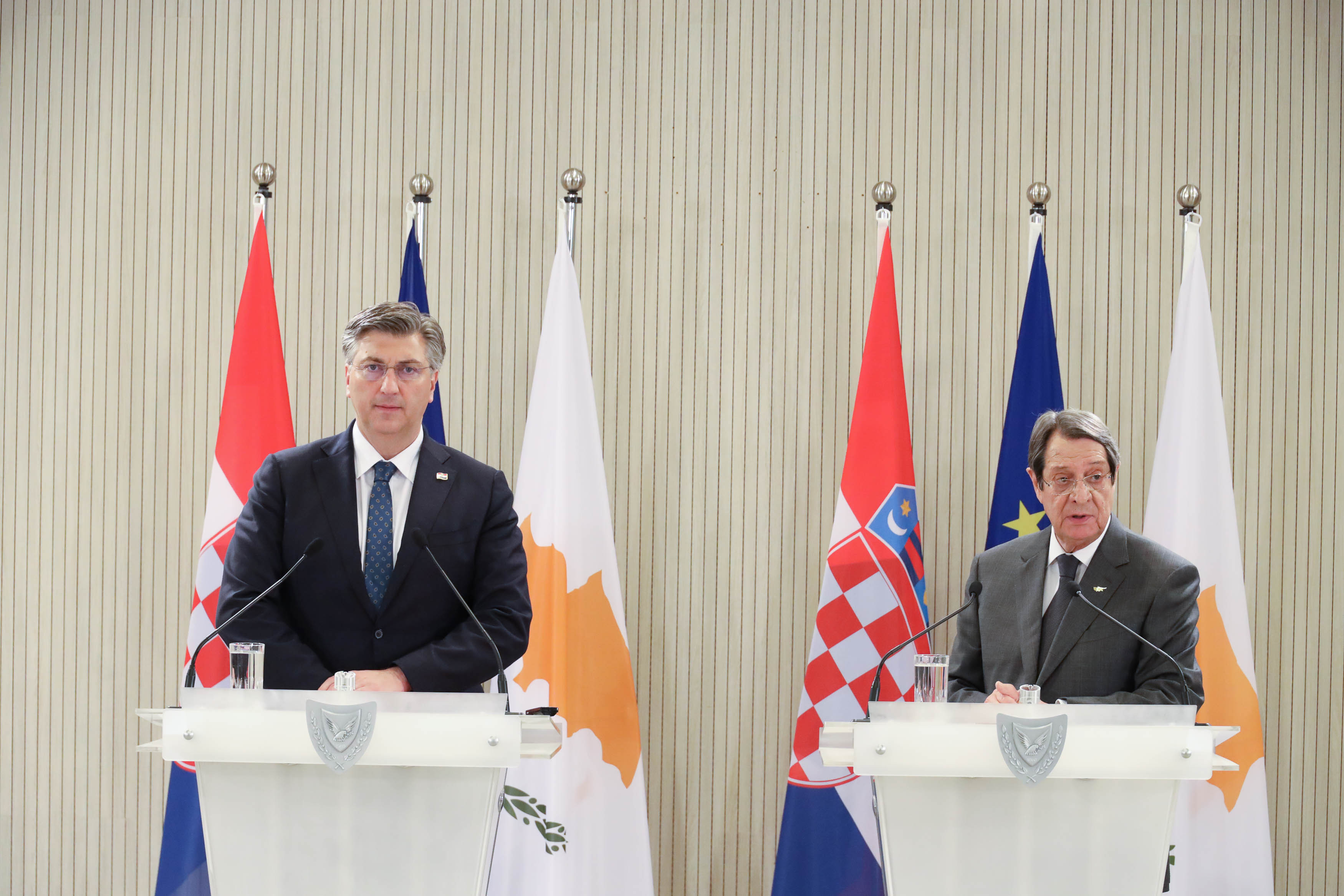 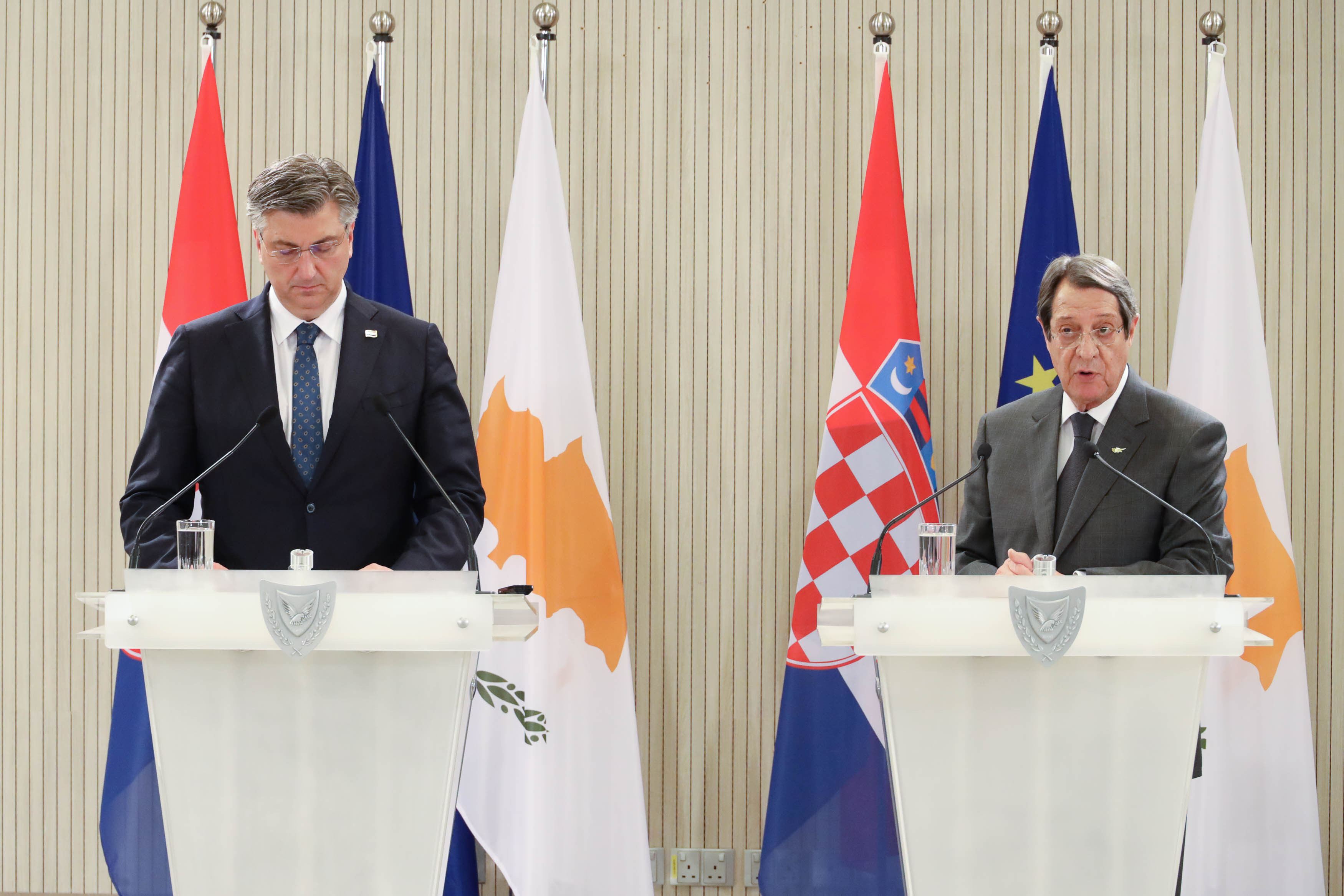 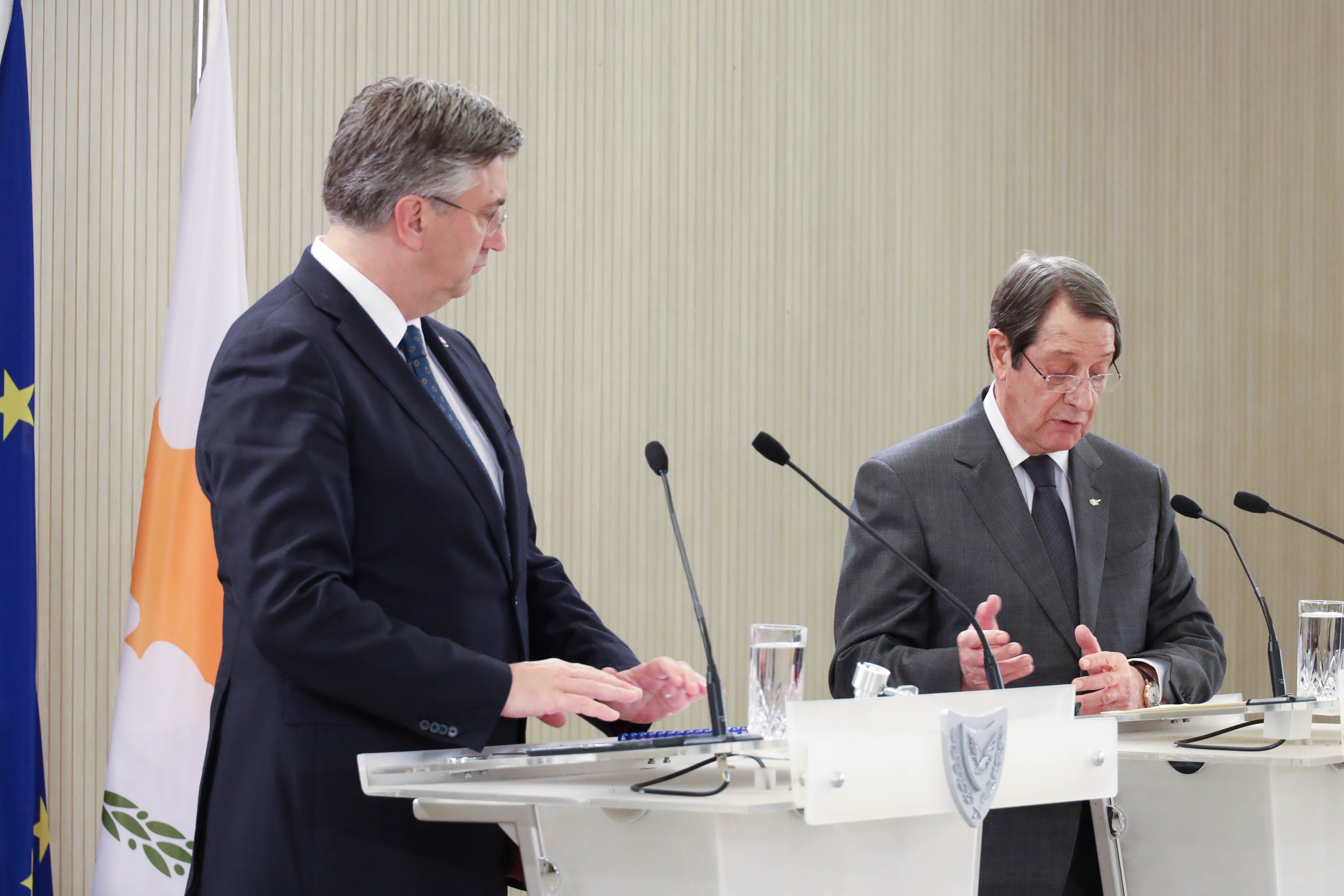 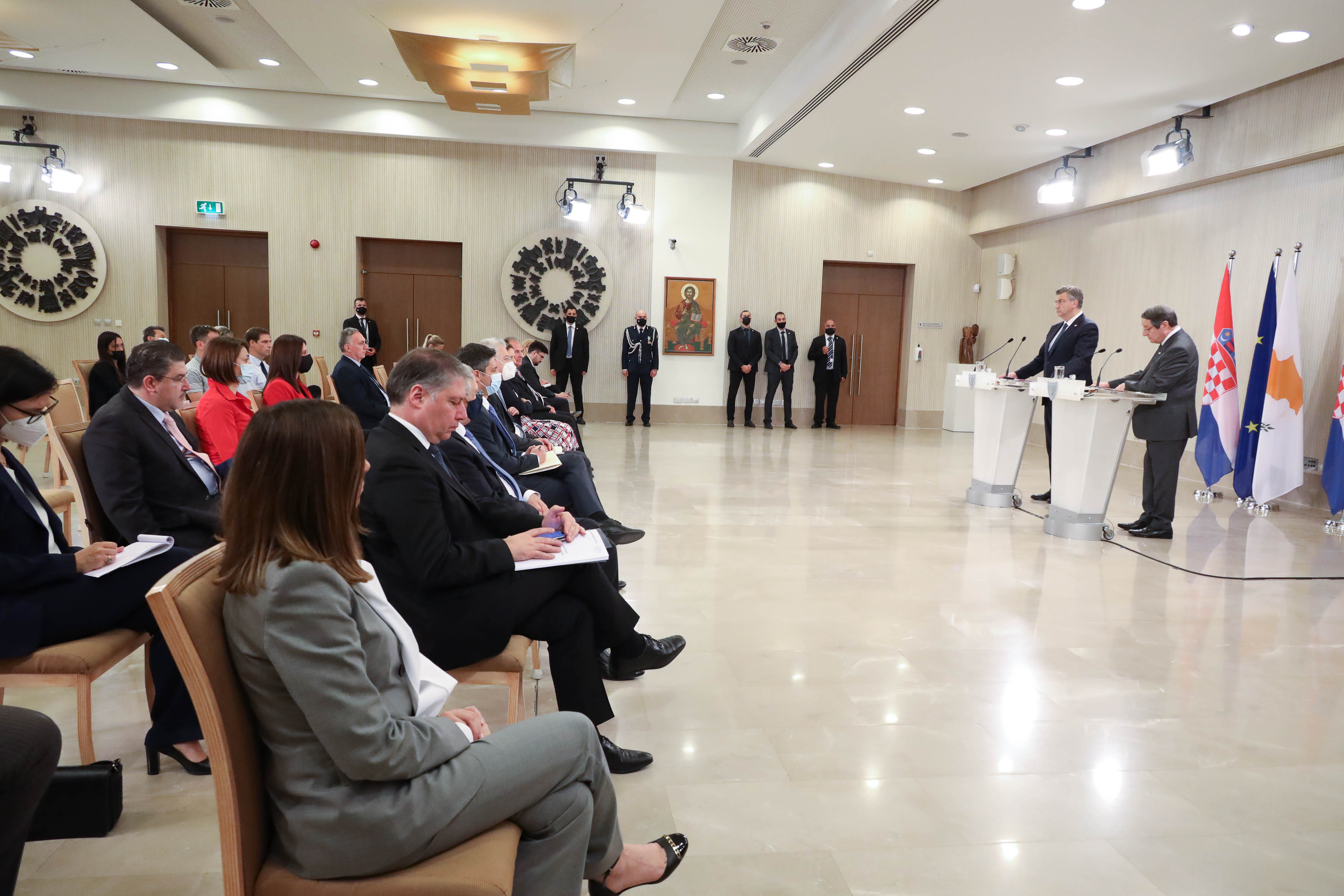 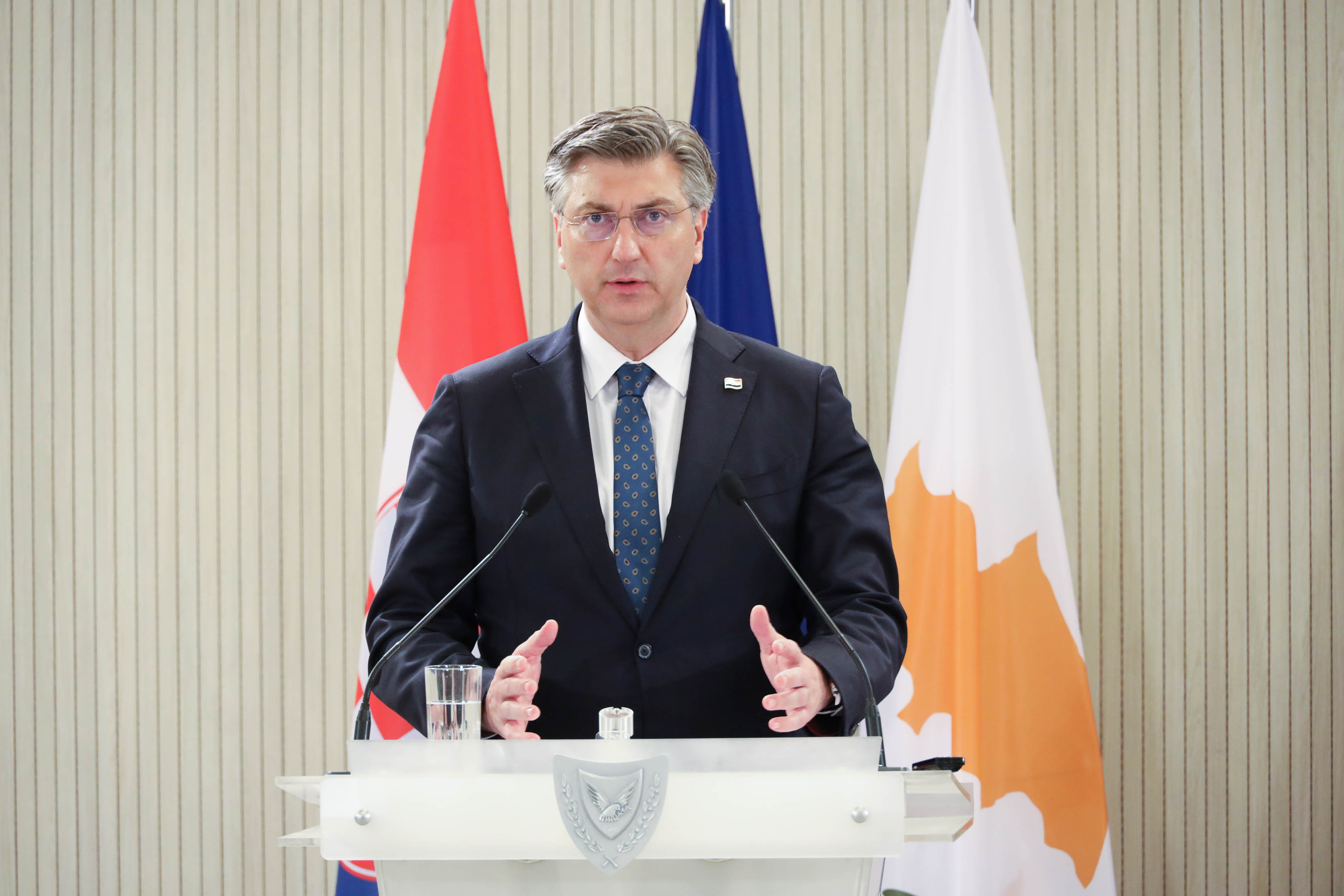 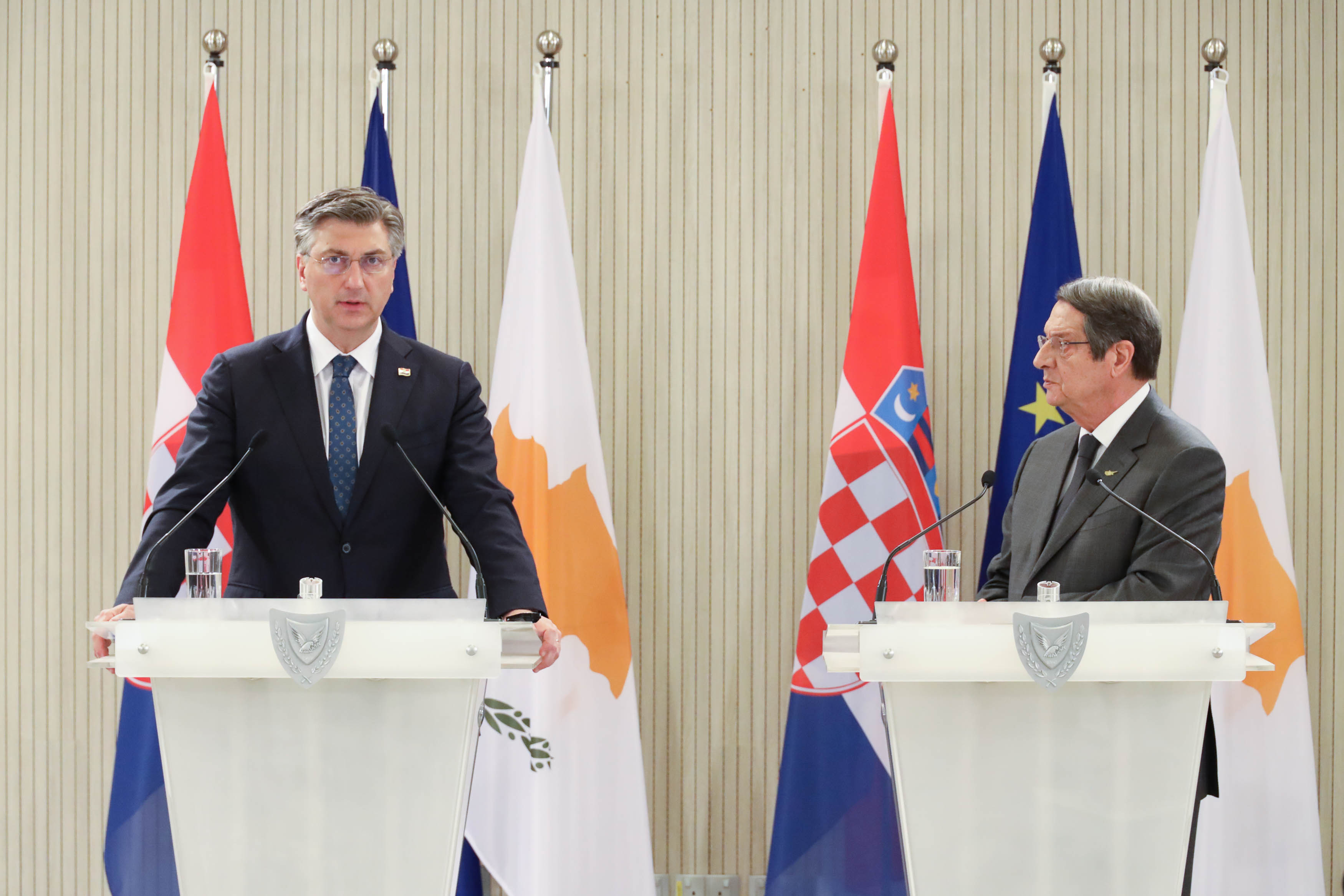 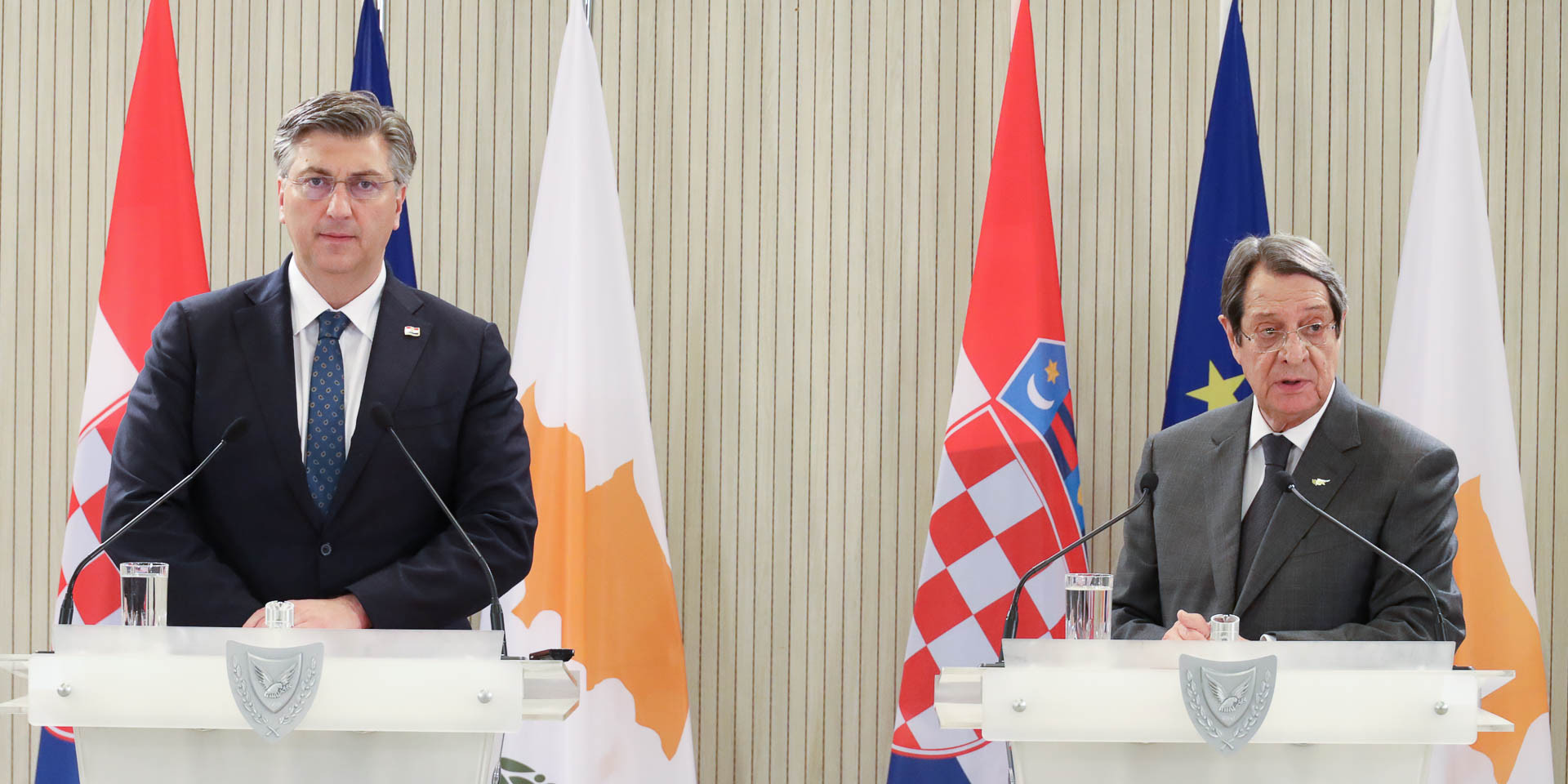 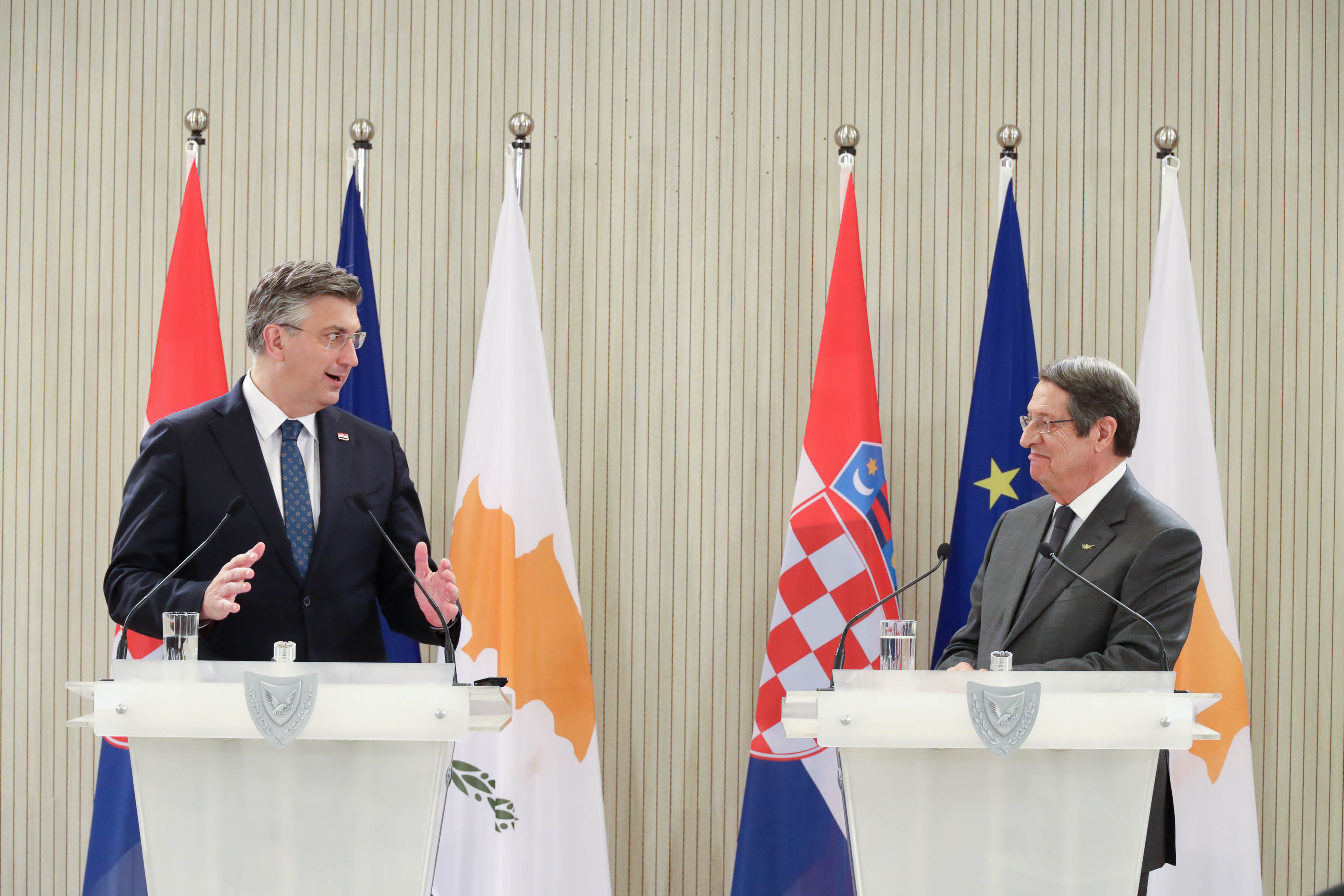 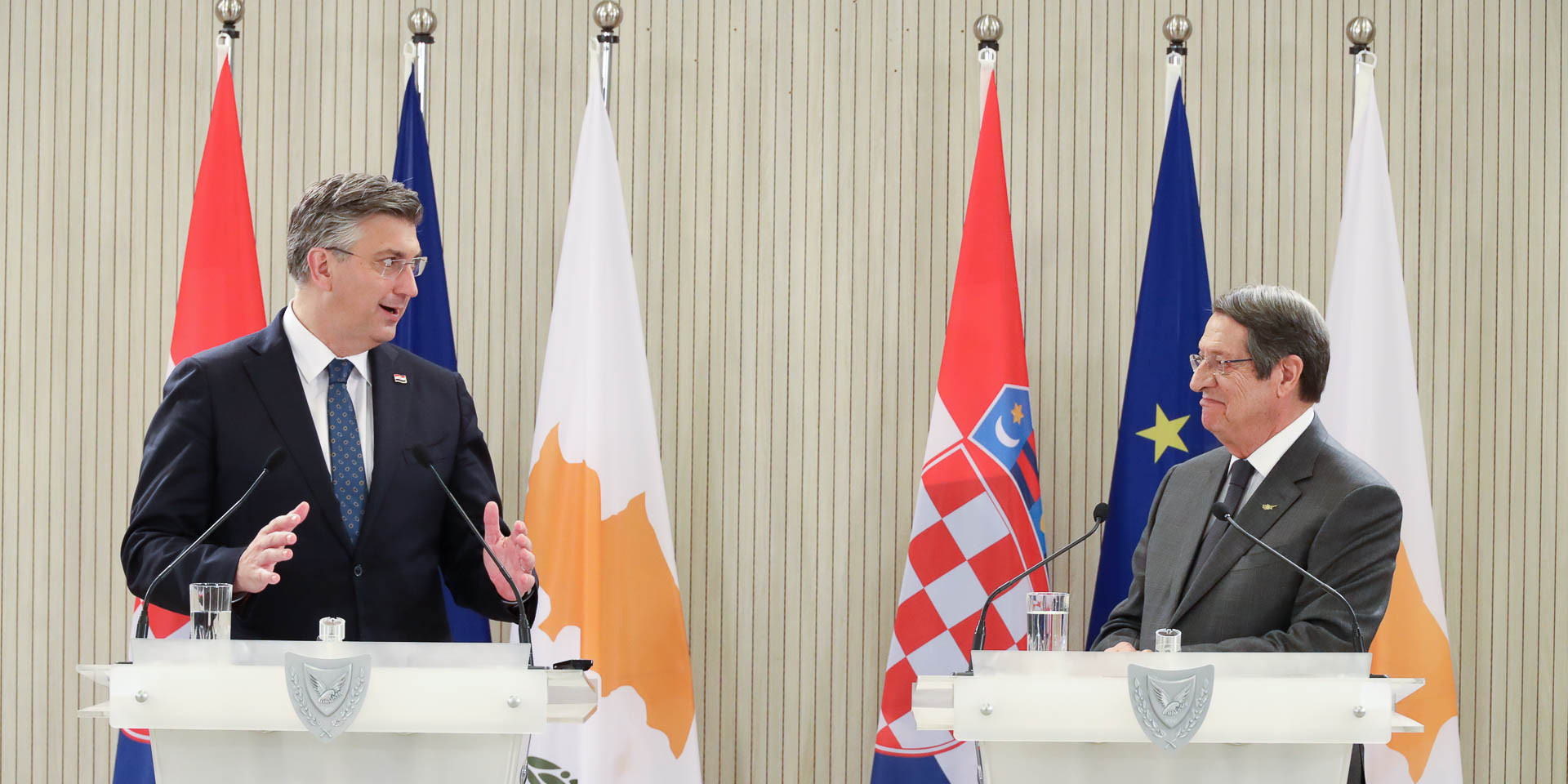 The President of the Republic, Mr Nicos Anastasiades met today, at the Presidential Palace, with the Prime Minister of Croatia, Mr Andrej Plencović, who is paying an official visit to Cyprus.

The Croatian Prime Minister arrived in the morning at the Presidential Palace where he was officially welcomed by the President.

A military guard presented honours and the National Anthems of the two countries were performed. The Prime Minister then laid a wreath at the Monument of Archbishop Makarios III.

Later on the President and the Prime Minister held a private meeting, followed by expanded talks between the delegations of the two countries.

After the talks the President and the Prime Minister made remarks to the Media.

In his remarks, President Anastasiades said that «It is with great pleasure that I welcome to Cyprus the Prime Minister of Croatia, Mr Andrej Plenković, a very good friend and colleague at the European Council.

Dear Andrej, your visit constitutes a turning point in the relations between our two countries, since it is the first ever visit of a Croatian Prime Minister to the Republic of Cyprus, while next year we will also celebrate another important milestone: The 30th anniversary of the establishment of relations between our countries.

During these 30 years we have enjoyed the continuous deepening and expansion of our relationship, as evident by the important agreements that our countries have concluded in a wide range of areas, which today form the institutional framework and the backbone of our bilateral ties.

I am also particularly pleased to note that the high level of political dialogue we have established in recent years has enabled our cooperation to enter into a new phase, with concrete and pragmatic value, especially in the fields of Education, Tourism, Trade and Investments.

Having said that, I wish to point out the great significance we attach to the conclusion of the Agreement on Avoidance of Double Taxation between Cyprus and Croatia, which will prove of significant added value to our existing economic ties.

As regards the pivotal sector of Tourism, I am confident that the increase of direct flights and the flow of passengers between our countries over the last two years will continue to contribute to the further strengthening of our cooperation in this sector.

During our deliberations today, we also agreed on the need to undertake ambitious initiatives, aimed at increasing the volume of our bilateral trade of goods and services, as well as the implementation of promising investment programs that will foster the cooperation between the business communities of our two countries.

At the same time, we both pay special attention to digital transformation. As I explained to you earlier, dear Andrej, we have recently signed a relevant Memorandum of Understanding with Estonia, a leading country in this field, and expressed our interest to explore the potential of establishing a similar mutually beneficial collaboration with Croatia as well.

We had an in-depth discussion with regard to Shipping, one of the bedrocks of our economy. Within this framework, taking into account the significant expertise Cyprus has in this field, I proposed to Prime Minister Plenković the signing of a Memorandum of Understanding in the Maritime sector.

Today’s meeting also provided us with a timely opportunity to discuss matters on the European agenda.

I will begin with Ukraine, as I had the opportunity to receive first-hand information by Prime Minister Plenković about the situation on the ground, following his recent visit to Kiev, on the 8th of May.  We both understand that since the 24th of February and the ensuing massive humanitarian crisis, the situation is deteriorating at alarming speed.

From the very first moment, the EU and its Member States have consistently supported Ukraine in political, diplomatic, financial and technical matters and will continue to do so.

We have also stressed our unwavering support to Ukraine’s independence, sovereignty and territorial integrity within its internationally recognised borders.

At the same time, we have been united in adopting sanctions against Russia, in an attempt to apply pressure to review its actions, cease hostilities and engage in negotiations to find a diplomatic solution.

We are aware that these sanctions, inevitably, come at a cost for our own economies.  However this cost should not be greater on the economies of Member States than on the Russian economy. That is why they should be targeted, with a specific impact on the sectors they aim to affect.

The other thing we have to bear in mind is that for our policy to have maximum impact, third countries which are associated with the EU must align its foreign and security policies with those of the Union.

I am referring, among others, to Turkey. The decision of Turkey not to align itself with the Russia sanctions is deplorable and it is only fitting that the EU applies pressure on Turkey to also adopt those sanctions and abandon its self-serving behaviour, which, inter alia, undermines the intended effect of the sanctions.

All eyes are on Ukraine at the moment, but we must not lose sight on the Cyprus problem, an EU and European problem as well.

In this regard, I briefed Prime Minister Plenković on my constant initiatives to overcome various challenges and achieve the resumption of peace talks, with a number of bold Confidence Building Measures at the core of this effort as a first step to establish an environment conducive for productive settlement talks to take place.

However, the immediate rejection of my proposed Measures by Turkey and the Turkish Cypriot side, despite the strong support by the international community and the European Union, is once again indicative of Turkey’s true intentions: to prolong the current impasse in the negotiating process.

In addition to that, I am afraid that time and again, Turkey and the Turkish Cypriot side, by creating tensions through illegal and provocative actions on the ground and the sea, and by insisting on proposals in contravention of all UN resolutions and the agreed framework, prove that they are only interested in political gains and not reaching a settlement that will lead to lasting peace.

However, despite the continuous setbacks, I once again made it absolutely clear to Prime Minister Plenković that I will spare no effort and I will continue to insist on the need for the Turkish Cypriot side to return to the negotiating table and resume peace talks from the point they were suspended.

And taking this opportunity, I would like to extend my deep appreciation to Prime Minister Plenković for his continued support in our efforts to reach a lasting and functional settlement, as well as for Croatia’s firm position in support of our sovereign rights.

The Prime Minister and I also had a productive exchange on issues such as Migration; the EU security and defence role, and the gradual increase of its military in complementarity with other partners; Climate Change; and, of course, the rise in energy prices which has deteriorated in the aftermath of the war in Ukraine.

In relation to the last point, we spoke with Andrej about the necessity to increase the EU energy independence as a strategic priority and the urgency to speed up projects that can enhance this effort.

In this regard, I had the opportunity to brief the Prime Minister about projects such as the EastMed pipeline and the electrical interconnections from the Eastern Mediterranean and North Africa to Europe, which have the potential to bolster EU energy security.

Of course, the EastMed Pipeline – which I must remind is an EU Project of Common Interest – is still being assessed in terms of its economic sustainability.

But the fact remains that this project has the capacity to significantly assist the EU with energy diversification and supply it with an additional steady supply of natural gas.

As for the EuroAsia and EuroAfrica interconnector, respectively, they are intended to stabilise the regional power supply, while, in addition, they will also address Cyprus’ energy isolation.

The situation in the Western Balkans was also part of our agenda today. With the Prime Minister we shared our concerns about the worrying resurgence of tensions in the region, but at the same time we agreed on our resolute commitment to support the countries of the Western Balkans even more and to take forward the region’s future in the EU, in accordance with the established conditionalities.

In concluding, dear Andrej, please once again accept my sincere appreciation for your visit, as well as my satisfaction for your genuine commitment towards the further enhancement of the relations between Cyprus and Croatia».

On his part, the Prime Minister of Croatia said, among other things, that the political understanding and the intensity of the political dialogue between the two countries, including the cooperation of the respective Foreign Ministries, is to be commended, adding that there is huge space for investments in many fields, such as in petrol and chemical industry, pharmaceutical companies, electrical engineering, IT sector and with regard to digital cooperation.

He added that the respective Ministries of the two countries will follow up in order to increase the volume of trade.

He also noted the importance of concluding the Agreement on Avoidance of Double Taxation, pointing out that everything should be ready by next November.

He also said that direct flights will facilitate tourism.

The Croatian Prime Minister also said that with the President they discussed Migration, which puts a strain in Cyprus’ migration policy since it receives large numbers of illegal migrants coming from Turkey, Africa and elsewhere.

He also noted that the cooperation in the field of energy is most important given the spike of the energy crises after Russia’s invasion in Ukraine, adding that both countries can explore ways on how to benefit from each other’s potentials when it comes to gas, pipelines and other investments.

«We can use the liquified natural gas terminal that Croatia has built» that has been supported by the EU.

Referring to the Cyprus problem, the Prime Minister said that «I am grateful for the clear explanation of your initiatives. I very much support the ideas that would increase the confidence in Cyprus», adding that «Croatia’s position has always been a principled one, supporting your efforts, advocating a peaceful solution and supporting all efforts that would bring the parties closer and that Cyprus could function in accordance with the plan that you have suggested, that is in accordance with the UN Security Council resolutions respecting the international law your sovereignty and integrity and this position will not alter, it has been a continuous and very clear one».

Concluding, he said that Croatia supports the various packages and restrictive measures and sanctions against Russia that the EU has adopted and will continue to do so. 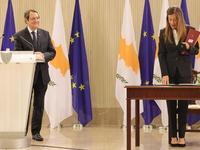