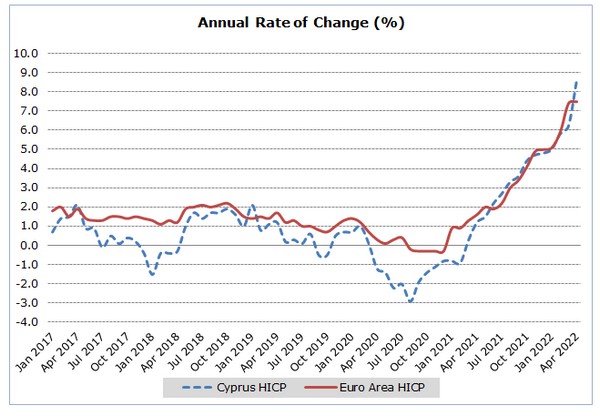 For the period January - April 2022, compared to the corresponding period of the previous year, the largest changes were noted in Housing, Water, Electricity, Gas and Other Fuels (16,5%), Transport (12,4%) and Food and Non-Alcoholic Beverages (8,9%). (Table 1)

As regards the economic origin, the largest change when compared both to the index of April 2021 and to the index of the previous month, was observed in Energy with percentages of 33,6% and 8,9% respectively. (Table 2)

Imports, Sales and Stocks of Petroleum Products: May 2022

Turnover Value Index in the Divisions of Wholesale Trade and of Trade/Repair of Motor Vehicles: 1st Quarter of 2022

Price Index of Construction Materials: May 2022