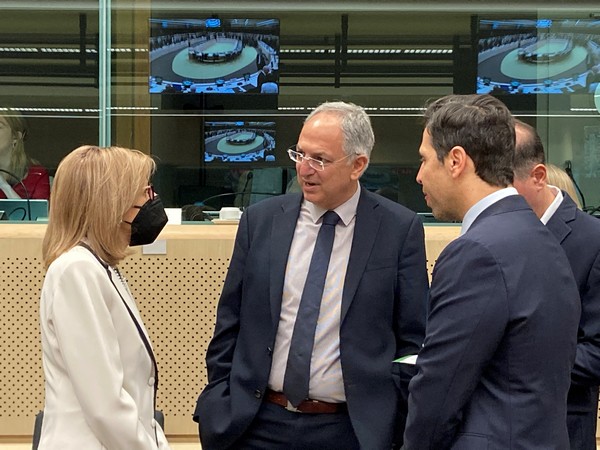 The Minister of Agriculture presented on behalf of Cyprus, Lithuania, Luxembourg and Malta the position paper regarding an EU Positive List for the keeping of companion animals

The Minister of Agriculture, Rural Development and the Environment, Mr Costas Kadis presented today during the Agriculture and Fisheries Council in Brussels, the position paper on a new EU legislative framework for an EU Positive List for the keeping of companion animals on behalf of Cyprus, Lithuania, Luxembourg and Malta. Speaking during a public session of the Council, Mr Kadis stated the following:

Every year, millions of wild animals are captured from their natural habitats and sold around the world, destined for a life in captivity.

It is well-documented that the trade in exotic species is one of the main threats to biodiversity, placing many species in danger of extinction. According to IUCN, the world’s leading organisation on conservation, one in four mammal species and one in eight species of birds, face a high risk of extinction. Biodiversity may also be impacted in the case where wild species escape or are released by their owners into the wild. The European Commission estimates that the cost of controlling and managing the damages from invasive species in the European Union is 12 billion euro annually.

Wild animals have not evolved to live with humans as pets, and suffer greatly when captured, transported and placed in captivity. Furthermore, wild animals have complex social, behavioural, and nutritional needs that make it extremely difficult for individual owners to provide them with the care they need and, as a result, they are often abandoned.

It is estimated that more than 70% of all zoonotic diseases originate from wild animals. If wild animals become pets, their close proximity to human owners drastically increases the danger of spillover. Furthermore, many wild animals that are kept as pets pose a serious threat to people’s safety, due to their natural behaviour, exhibiting aggressive or predatory traits.

Although the Convention on International Trade in Endangered Species of Wild Fauna and Flora (CITES) is highly significant in regulating the trade of species at-risk, it cannot safeguard many wild animal populations that are targeted through the exotic pet trade.

In an effort to address this problem, a number of EU countries have adopted a Positive List - a list of a limited number of animal species that can be kept by private citizens as pets. A Negative List would mean that all species that are not included are by default allowed to be kept as pets, despite the threat to biodiversity and animal welfare concerns. Although these are important steps, in order to have a significant impact on biodiversity conservation and animal welfare and protect public health and safety, a coordinated effort is needed at EU level.

Therefore, Cyprus, Lithuania, Luxembourg and Malta call on the Commission to explore the potential benefits of adopting an EU-wide Positive List, which will be based on the experiences gained by those Member States who have implemented this system.

The European Union can and must do more to protect both animals and humans, and we hope that we will have your support.

For the video of the Minister's statement press here.

Speech by Prof. Costas Kadis, Minister of Agriculture, Rural Development and Environment, at the Ministerial Meeting for the Climate Change Initiative in the Eastern Mediterranean and Middle East (EMME)