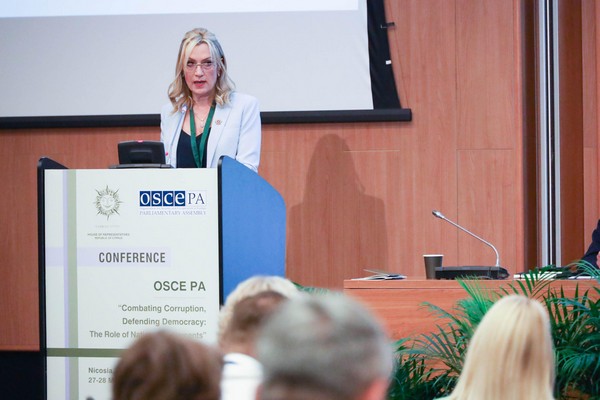 Corruption is more than a threat to democracy. It is more than an ethical issue. Corruptionundermines economic development, violates social justice and erodes trust in state institutions. Citizens bear heavy economic and social costs due to corrupt practices.

Being a member of Parliament myself, I place particular focus on the responsibilities of Parliaments in fighting corruption.  In our democracies, our fellow citizens look to their Parliamentarians, to the people they have trusted and elected to set the framework of law and oversee its implementation. National Parliaments are expected to play a leading role in combating corruption. And National Parliaments are very well equipped for this battle. Their core legislative, oversight and representation functions are powerful tools.

National Parliaments must use their legislative function to fight corruption.

Enactment of more robust legislation to exclude conflicts of interest lie in the hands of Parliaments. Legislation protecting whistleblowers, is in the hands of Parliaments.  I submitted a relevant legislative proposal in 2016, which was enacted into law this year. I am glad to say that it was adopted unanimously. Furthermore, the role of Parliamentarians is essential for the adoption of laws on lobbying, on shell companies, on ultimate beneficial ownership and on asset recovery. Specifically, on the issue of ultimate beneficial ownership, our dear colleagues in Slovakia can be very proud for their comprehensive legislation on this important matter. I had the chance to participate in a Conference in Bratislava on the issue and I was fully informed about that important legislation.

What I consider most essential is for such legislation to be strict, leaving no margin for exploitation from those that wish to evade it.

Moreover, law-making by Parliament is required to guarantee the independence of the judiciary, to shield audit institutions from external influences and to make sure that anti-corruption agencies are not hollow constructs.

The Media play an important role in defending democracy. It is our obligation to guarantee freedom of the Media and to secure the broader possible space for civil society. Holding politicians accountable is also a huge Media responsibility.

A distinct capability of Parliaments is their role in the national budget cycle. Although their involvement in drafting budget legislation and in its implementation and audit varies to a significant extent across the OSCE area, one way or another National Parliaments can have ultimate control over public finances. And this can be one of the most powerful parliamentary tools for holding governments to account.

At the same time, the adoption of budgets for independent institutions has its own distinct significance. Supreme Audit Institutions must be further strengthened and provided with all the necessary tools and powers, in order to effectively exercise their part in the system of checks and balances. And their budgets must enable them to match resources and responsibilities.

Besides their legislative function, National Parliaments must also use their oversight function to combat corruption.

Holding Governments accountable is a core responsibility for Parliaments. I strongly believe that political parties in Parliament, pro-government or in the opposition, need to be able to find some common ground in exercising parliamentary oversight, this being one of the cornerstones of democracy. And this must be taken into consideration in the allocation of the chairpersonships of parliamentary Committees. For instance, Parliamentary Expenditure Control Committees must be chaired by the opposition, so that curbing corruption cannot fall victim to party politics.

Another core element of parliamentary oversight is the review and approval of certain public officials’ appointments. Relevant practices vary considerably across the OSCE region and are subjected to strict constitutional limitations in some countries. Presidential democracies may be presented with more challenges than parliamentary democracies, but this should notpose permanent obstacles.  A prejudiced appointment of officials can really make or break the work of such institutions. Effective participation of National Parliaments in this process is an indispensable precondition. National Parliaments must fight for their right to be consulted upon concerning appointments, particularly of officials in supreme audit institutions and anti-corruption commissions.

Additionally, cooperation with the aforementioned independent institutions is central. These institutions have the resources, expertise and mandate to look deep and wide into matters pertaining to the use of public funds. To be effective, they must be able to report the results of their work to specialized parliamentary committees and to make recommendations to Parliament for enactment of legislation that responds to their findings. Parliaments must also be able to exercise oversight on whether other competent authorities, such as the Public Prosecutor, prompts investigations or takes necessary action based on findings of the Supreme Audit Institutions. This is the essence of the effective functioning of checks and balances.

In our efforts to curb corruption, independent and attentive Media can support parliamentary oversight efforts to a great extent. The Media can bring scandals to the forefront, following their own research. The Pandora Papers, the Panama Papers, the Paradise Papers, the FinCen Files and the Golden Passports in Cyprus where brought up by the Media. The Media can follow up on investigations launched on corrupt officials. They have to follow-up on corrective action taken every time a scandal surfaces. On the other hand corruption is not only about politicians but in some cases it is also about the Media, when they choose to silence or bury scandals or they fail to follow-up a scandal.

Politicians, must also use their representation function to combat corruption.

Consensus building within our societies, as well as the encouragement of citizens’ active engagement on matters of public interest, such as corruption, is instrumental in enhancing integrity. Strengthening the participation of civil society, empowers citizens to reject corrupt practices and to expose corrupt politicians and officials. Parliaments can help to channel the interests and concerns of civil society into parliamentary debates. Furthermore, broad coalitions between parliament and a vibrant civil society can be helpful in curbing corruption. They might be effective by creating synergies through pooling resources, and increasing the flow of information. What Members of Parliament know best is how to mobilise citizens. We can amplify the voices of our citizens and our civil society using our established outreach channels and we can create the necessary awareness and determination to fight corruption.

In order for National Parliaments to be able to exercise their role in preventing corruption, they need also to self-regulate effectively and credibly.

If Parliaments themselves are dominated by corrupt individuals they risk their legitimacy as representatives of the people. We have had our own negative experience in this regard, as exposed by the Al Jazeera news network. It is important that National Parliaments put their own houses in order first.  Even within the most robust and coherent legislative framework, very little can be achieved by legislators, if they do not first confront the specter of corruption within their own ranks. Therefore, political party and political campaign financing, as well as Codes of Conduct for parliamentarians, are a litmus test. The Cyprus House of Representatives has adopted its own Code of Conduct. Discussions started in the competent Committee, of which I am a member, since my previous mandate and were concluded during the current mandate. Self-regulation is not an easy process! Especially when it comes to matters of conflict of interest.

Laws regulating campaign finances, including regulations on the disclosure of interests, spending and contribution limits, and the provision of public subsidies have acquired increased significance.

Furthermore, parliamentarians themselves must adhere to Codes of Conduct or other legislative equivalents, which provide guidance for matters ranging from conflicts of interest and the disclosure of assets to post-governmental employment and nepotism. To be effective, such codes must be accompanied by enforcement mechanisms and be based on a shared understanding by parliamentarians of what is appropriate behavior and what is not, because otherwise they amount to empty promises. Proper Codes of Conduct shield against corrupt practices but also, and perhaps most importantly, they help to restore the often-shattered public confidence in parliamentarians.

We often say that no country is immune to corruption. Nor international organisations I might add. In this regard, as the Special Representative on Fighting Corruption, I have prepared a Supplementary Item on a Code of Conduct for the upcoming OSCE PA Annual Session in Birmingham, which has already been sent to delegations. This is not a final proposal for a Code of Conduct, but rather a starting point, aimed at laying down some basic provisions, that we can discuss further after the Annual Session. The Supplementary Item has been drafted after consulting with the International Secretariat and I thank them very much for the insight they have provided. It aims at sending a strong message that the OSCE PA is committed to combating corruption and that it can lead by example in this field. I very much hope that it will be validated and adopted by our Assembly, so that we can continue to work in that direction.

In concluding, I wish to stress, once again, that corruption does not stop at national borders. Links across borders are common. Parliamentary cooperation at a regional or global level, like the one promoted by our Assembly, can be a very valuable tool to this end. It allows the strengthening of advocacy efforts and the sharing of experiences and best practices. Strong peer review but also peer support emerge from interparliamentary cooperation. I very much believe in the strength of the OSCE PA in this field. I know for fact that by maintaining continuity in our anticorruption priorities, a strong focus, a committed leadership, we can significantly benefit members of National Parliaments. Good practices need not only to be discussed. The OSCE PA must be able to develop its own sets of recommended rules for its members, which incorporate good practices that we can utilize.

(The text as sent by the House of Representatives)