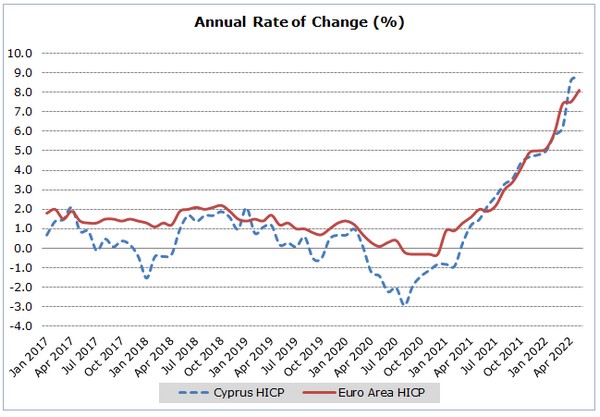 Compared to April 2022, the largest change was recorded in category Restaurants and Hotels (3,1%). (Table 1)

For the period January - May 2022, compared to the corresponding period of the previous year, the largest changes were noted in Housing, Water, Electricity, Gas and Other Fuels (17,6%), Transport (13,2%) and Food and Non-Alcoholic Beverages (9,3%). (Table 1)

As regards the economic origin, the largest change when compared both to the index of May 2021 and to the index of the previous month, was observed in Energy with percentages of 37,6% and 4,9% respectively. (Table 2)


Note: The weights of the categories are calculated with infinite decimal figures and rounded up to two decimals when published. Figures do not add up to the total due to rounding.

The prices of 805 goods and services are recorded once every month, except for some seasonal products (e.g vegetables and fruits), meat and fuels, whose prices are collected every week (every Thursday). The collected prices are those actually paid by consumers for the purchase of specific goods and services, and they include various taxes, such as the Value Added Tax and excise duties. For the calculation of the Index, end-of-season sales prices are taken into account as well as special offer prices which are available for the general public and have no restrictions.