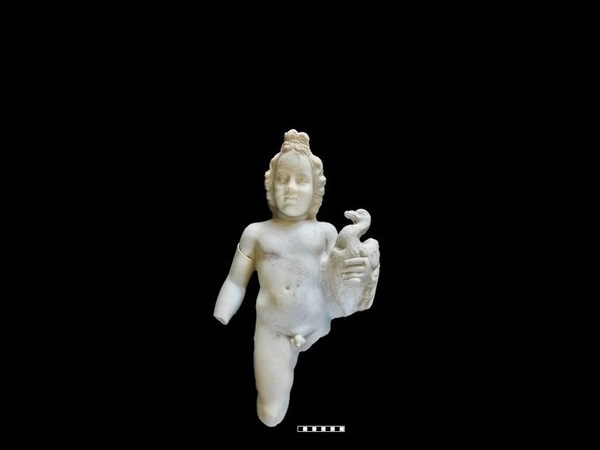 The Department of Antiquities of the Ministry of Transport, Communications and Works, announces the completion of the 2022 excavation season of the Kourion Urban Space Project (KUSP), under the direction of Dr. Thomas W. Davis of the Lanier Center for Archaeology at Lipscomb University and Dr. Laura A. Swantek of Arizona State University, USA. KUSP partners include the Australian Institute of Archaeology, the University of Cyprus, the Cyprus University of Technology and the Western Sovereign Base Area Archaeological Society.

Since 2013, KUSP has been excavating the remains of a large building (Building 4) likely destroyed in a seismic event, just west of the Earthquake House on the Kourion acropolis, Lemesos District. The excavation of Building 4 is part of a long-term archaeological investigation of the ancient city of Kourion that includes planning of the natural and cultural environment, continued work on materials from the Earthquake House, investigation of soil micromorphology to better understand the history of earthquakes in the area, mapping of the Kourion water system and urban plan, and study of wealth inequality and social dynamics, during the Early through Late Roman period. KUSP also investigates the social and economic impacts of natural disasters on human social systems.

KUSP’s summer 2022 excavation season revealed that Building 4 is older than originally proposed, possibly constructed sometime in the 2nd century CE. This earlier date was determined through careful analysis of pottery and sculpture found on the room floors. A sculpture of a young boy was found lying face down on a mosaic floor and covered by large tumbled wall stones in the westernmost excavated room of Building 4. The sculpture is broken- missing the right hand, the left leg, and both feet. He has wavy hair arranged in a top-knot, and a slightly bulging belly complete with a belly-button. In his left hand he holds a bird, most likely a duck. This sculpture is similar to one that is currently in the Vatican Museum which is thought to be a Roman variation of a 2nd Century BCE original. This variation was popular during the 2nd century CE, and its presence along with similarly dated pottery found resting on the floor suggests that Building 4 was in use during this time.

There is little doubt that Building 4 was inhabited by wealthy individuals. Excavation this season uncovered more imported marble slabs used as revetment and fragments of the painted plaster that once adorned walls. In one of the central rooms of Building 4, the painted plaster fragments appear to form a central panel with leaves and possibly grapes in green, blue and yellow, that is bordered with thick stripes of white, red and black. KUSP’s work this summer also produced more fragments of an Egyptian mosaic glass plate and a glass cage cup originally excavated in previous years. Both of these objects were imported, were manufactured in limited places and in small quantities by specialists and were undoubtedly expensive and reserved for wealthy and high-status individuals. Taken together, the highly decorated nature of the building and the imported and expensive goods found within it are important indicators of who used this building.

KUSP is working in collaboration with the Department of Antiquities, Cyprus to complete the excavation of Building 4 and preserve the structure for future visitors to Kourion. Its position on the acropolis next to the Earthquake House, a non-elite domestic structure, and just south of the public buildings of the city, will give visitors a sense of what it was like for people of different socio-economic classes to live and move around an ancient city.