For the period January – July 2022, the CPI increased by 8,2% compared to the corresponding period of the previous year. (Table 1) 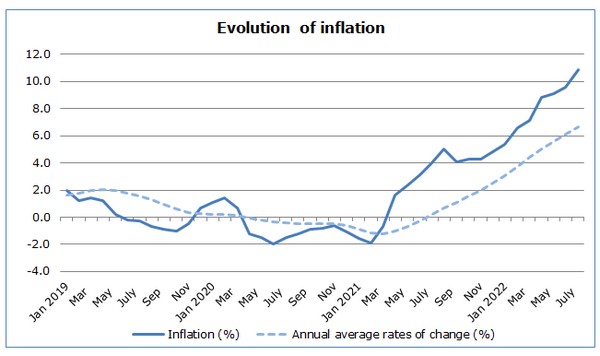 In comparison to the CPI of the previous month, the largest change was noted in Clothing and Footwear (-10,2%). (Table 1)

For the period January – July 2022, compared to the corresponding period of the previous year, the largest changes were recorded in Housing, Water, Electricity, Gas and Other Fuels (20,1%) and Transport (18,7%). (Table 1)

Analysis of effects in units

Compared to the Index of July 2021, the categories Transport (4,00) and Housing, Water, Electricity, Gas and Other Fuels (3,73) had the largest effect on the change of the CPI. (Table 3)

The categoryHousing, Water, Electricity, Gas and Other Fuels (1,05) had the largest positive effect on the change of the CPI compared to the previous month. (Table 3)

Finally, Electricity (0,90) had the largest positive effect on the change of the CPI of July 2022 compared to the previous month. (Table 5)

Note: Totals are calculated on the basis of the effects of the categories with infinite decimal figures and rounded up to two decimals when published. Figures may not add to totals due to rounding error.

The price collection is carried out only in urban Districts of Lefkosia, Larnaka, Lemesos and Pafos. For each city, the fluctuations in the product prices each month, are weighted according to their population. Specifically, the weights for the four Districts are: Lefkosia 42%, Lemesos 30%, Larnaka 18% and Pafos 10%.

Until January 2015, COICOP 4 classification was used for the calculation and the dissemination of the CPI. From January 2016 and onwards, CYSTAT is adopting the ECOICOP classification satisfying relevant Eurostat’s Regulation. In other words, the lowest level of detail for the classification used in CPI is COICOP 5-digits.

The Predefined Tables, available in Excel format, are updated up to and including December 2021. More recent data are published only on the CYSTAT-DB Online Database.