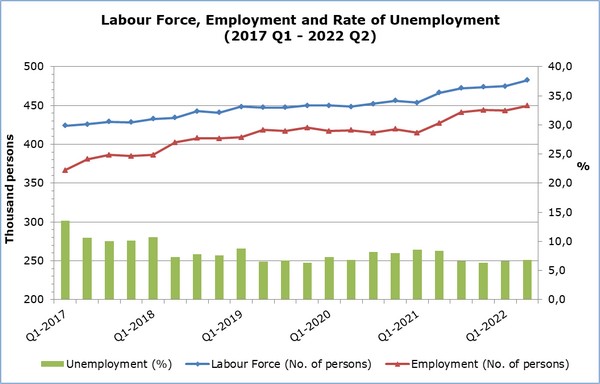 The Labour Force Survey (LFS) is conducted in all European Union Member States every quarter in accordance with Regulation (EU) 2019/1700 of the European Parliament and of the Council, which entered into force on 1.1.2021. Until 2020, the LFS was conducted in accordance with Regulation 577/98 of the Council of the European Union. In Cyprus the survey was carried out in 1999 for the first time and until 2003 it was conducted in the second quarter of every year. As from the second quarter of 2004 onwards, the LFS is conducted every quarter, on a continuous basis.

The aim of the survey is the collection of data which are useful in the formulation of policy on labour matters (employment, unemployment) and for pursuing and evaluating the programmes that are applied both by Government and by the European Union.

Employed - Persons aged 15 – 89 years old who, during the reference week, worked for at least one hour, as well as persons who had a job but were temporarily absent from work.

The differences are presented in the file:
Differences in employment estimates

Turnover Value Index in the Divisions of Wholesale Trade and of Trade/Repair of Motor Vehicles: 2nd quarter of 2022