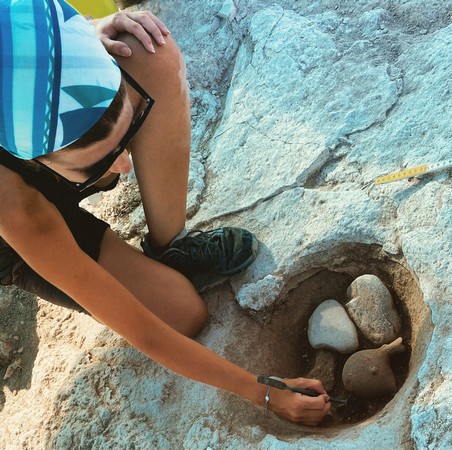 The Department of Antiquities, Ministry of Transport, Communications and Works announces the completion of the 2022 fieldwork season of the Italian Erimi Archaeological Project at Laonin tou Porakou, where an international team leaded by the University of Siena and directed by Prof. Luca Bombardieri, investigated an extended area of the Bronze Age settlement located on the highest plateau on the eastern Kouris riverbank.

The research on field focused on four important areas of the Middle Bronze Age settlement, with a major aim to clear aspects of social development of this Prehistoric community.

The investigation of the workshop complex on the top of the hill confirmed that this atelier, mainly intended for the production of dyed textiles, had a pivotal role for the Erimi community. By extending the investigated area towards the southern wing of the complex, a series of two new units were fully excavated (WA IX and SA VIII).

In the southern wing, unit WA IX (34 sq.m.), along with the adjacent unit SA VIII (38 sq.m.), formed the southernmost extension of the complex. WA IX appears as a small semi-open space with two phases of occupation attested to. In an earliest phase (Phase B, dated to the beginning of MC period) this area was equipped by a series of large squared basins and emplacements pertaining to a working space. In a most recent phase (Phase A, during the late or final MC period), the entire area was spatially reorganized. A complete RP duck-shaped askos comes from one of these early emplacements, deliberately filled and closed by a more recent plaster floor (Fig. 1). During this late occupation phase a new building room was constructed (SA IV), which extends toward the East, and WA VIII has been coherently transformed into an open passageway leading to this new roofed unit.

To the South, unit SA VIII appears as a roofed space internally subdivided into two rooms with specific use and function. A series of mortar-like installations and emplacements directly carved into the bedrock, along with a large bench built up by limestone slabs were located in the eastern room. The bench was used as a milling table with a multiple installation for three grinding slabs. An additional collection of discarded rubbers has been also found from the same room, which was likely used as a space for grinding on a large scale. A stepped access leads to the western room of unit SA VIII, where a further series of small pots emplacements is located flanking the western limiting wall. Noteworthy, unit SA VIII is equipped with a large monolithic threshold opened towards the south to the same alley where units SA I, II and III (excavated in 2009-2013) were accessible from. Thus, the location and spatial distribution of the newly excavated units in the southernmost extension of the productive atelier is a strong confirmation of the coherent design of the complex, which now appears characterized by a central working open courtyard enclosed by three series of parallel building rooms to the North, West and South.

The excavation in the residential quarter revealed a long-term use and transformation of the settlement layout. Four focus areas have been investigated to the South (Area T2), South-East (Area T5), East (Area B2) and South-West (Area B) respectively, with the aim to detect density, extension, and the developments in the architectural layout of the residential spaces.

A series of three units was cleared in Area T2 which extends in the first lower terrace towards the South of the workshop complex (172 sq.m.). Since no direct access from this area to the top of the hill has been cleared so far, it is thus likely that the workshop was isolated from the residential units.

To the South, unit T2/5 (25 sq.m.) has been fully investigated, located to the West of unit T2/6 excavated in 2021. This large rectangular roofed space is limited on the four sides by massive walls preserved up to four courses leaning on a base carved out the natural limestone bedrock. The entrance to the unit was originally located to the South through a large stepped monolithic threshold opened to an alley running East to West. In a more recent phase (Phase A, during the late MC period), a new larger alleyway has been constructed on a divergent line. Following this change in the architectural layout, a new access to unit T2/5 is located to the West. As to the abandonment process in this area, while the adjacent unit T2/6 was deliberately filled with objects originally not used in this room before being destroyed by fire, unit T2/5 close-by was emptied before being abandoned and have no evidence of being affected by fire. Such an action can be paralleled to the already observed ritual destruction carried out in the workshop complex before the abandonment of the settlement at the latest stage of Middle Bronze Age period.

To the South-East, unit T5/1 (35 sq.m.) appears as a narrow-roofed space equipped with a central bench built by stone slabs directly connected with an emplacement for a large ceramic container. This room is functionally connected to a long corridor leading to an open-air space and to a long drain channel.

To the South-West, unit B/5 (49 sq.m.) appears as a multifunctional working roofed space with a series of three small spaces outlined by mudbrick walls located to the northern limiting wall. An additional semi-circular bench with a rubber installation was built to the West of the unit, along with numerous large ceramic containers emplaced into the floor, while a large refuse pit is located to the South-East corner of the unit. The presence of numerous discarded animal bones from the pit, along with the presence of a fire-place nearby, where a few tripod cooking pots were found out, suggests that this space was also used for the processing and preparation of food. Interestingly, a complete terracotta mould for axe-shaped ingots was found in the destruction levels of unit B/5.

The semi-open space B/10 (25 sq.m.) extends towards the West of unit B/5. A sequence of occupation phases was cleared in this area which was originally set up as an open working area equipped with large squared deep basins and then re-designed in a later phase (Phase A, pertaining to the mature MC period). During this phase the area was partially enclosed, a series of shallow rounded basins and emplacements were built, along with a door with a stepped monolithic threshold in order to directly connect this space with the adjacent unit B/5. Finally, this same passageway was closed by a later wall before the abandonment of the area.

Additionally, thanks to an ongoing collaboration with the Politecnico di Torino and the University of Warsaw, a GPR survey has been conducted on the wider extension of the lower terrace, in order to collect new data to plan for future investigation in the residential quarter. Finally, a series of fixed physical topographical points and an aerial photo acquisition by drones has been conducted with the aim of mapping and creating a general 3D model of Bronze Age settlement.

The fieldwork season involved a team of archaeologists of the University of Siena, MA and PhD students from Italy, Cyprus and Greece, with a joint support of a topographer, an archaeobotanist of the Cyprus Institute and a team of four restorers from the Conservation School Palazzo Spinelli in Florence.

The fieldwork was carried out under permit and thanks to the scientific collaboration of the Department of Antiquities of Cyprus, in an on-going collaboration with the Direction and the Episkopi and Lemesos Archaeological District Museum staff, and with the support of the University of Siena, the Italian Ministry of Foreign Affairs and Italian Embassy in Lefkosia.

Applications for the management of Kelokedara Postal Agency 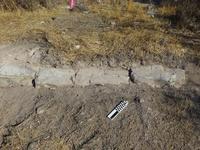 Applications for the management of Pervolia Postal Agency

Applications for the management of Kolossi Postal Agency