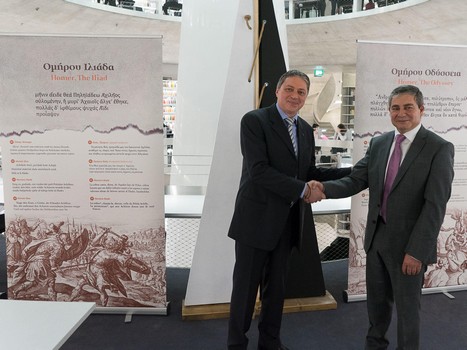 Homer's epic poems in the 24 official languages of the European Union, Turkish and the Cypriot dialect - European Commission’s Directorate-General for Translation event with the support of the PIO

Visitors to the Library of the University of Cyprus will have the opportunity to delve into the Iliad and the Odyssey, Homer's epic poems and leading masterpieces not only of the Greek but also world literature, in the 24 official languages of the European Union, Turkish and the Cypriot dialect.

In a ceremony which took place yesterday, 5th March 2019, the European Commission’s Directorate-General for Translation (DGT) handed over to the University of Cyprus the publications of Odyssey and Iliad in 24 european languages and presented them to the "Stelios Ioannou" Learning Resource Centre. The event was held under the auspices of the President of the Republic of Cyprus, Mr Nicos Anastasiades.

During the ceremonial part of the event, Heads of Diplomatic Missions of EU Member States Cyprus read short excerpts from the Iliad and the Odyssey in their respective language. Short addresses were given by the Rector of the University of Cyprus, Professor Tasos Christofides, and the Deputy Director-General of DG Translation of the European Commission, Mr Christos Ellinides. The event also included an exhibition curated by the Press and Information Office (GIT) titled “Homer and the Dawn of Western Literature” as well as thematic installations by local Cypriot artist Giannis Lazarou.

The initiative of assembling the books began in 2014 on the occasion of the Greek Presidency of the Council of EU when the Office of the Directorate-General for Translation in Paris in cooperation with the other offices in Europe put together the first travelling exhibition of the Odyssey translations. Since then, the exhibition has toured and made stops all over Europe, thus showcasing the indelible presence and impact of Homer on European culture and linguistic diversity.

The event was organized on the occasion of International Mother Tongue Day and is supported by the Press and Information Office (PIO). Media sponsor of the event is the Cyprus Broadcasting Corporation (CyBC).