Recent News
Message of the Officeof the Commissioner for Volunteerism and NGOs for World Humanitarian Day
Message of the Office of the Commissioner for Volunteerism and NGOs for the International Youth Day
Epidemiological risk assessment of countries in relation to the COVID-19 disease dated 11/8/2020
Government Employment by category: July 2020 (Total Employment: 52.865)
First Shipment of Humanitarian Aid to Lebanon
Amendment of the Agreement for the Avoidance of Double Taxation between the Republic of Cyprus and the Russian Federation
Foreign Trade Statistics
Registration of Motor Vehicles for January-July 2020
Intervention by the President of the Republic Mr Nicos Anastasiades at the international teleconference on providing assistance and support to the Lebanese people
The President of the Republic signed the Book of Condolences for the devastating explosion in Lebanon 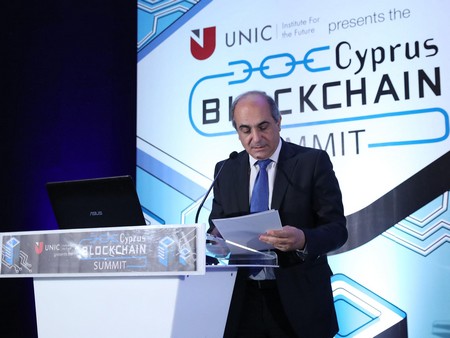 Address by the President of the House of Representatives, Mr Demetris Syllouris, at the “Cyprus Blockchain Summit”

It is with great pleasure that I have accepted the invitation to address the “Cyprus Blockchain Summit” organized by the IMH. The summit takes place at the right time, especially after the implementation of the National DLT Strategy of Cyprus which was approved by the Council of Ministers recently on the 18th June.

Despite its potential to act as a game changer, Distributed Ledger Technology, which is the umbrella term for Blockchain, continues to be a misunderstood concept. There are still issues related to scalability, privacy and confidentiality which slow down technical advancement, while regulatory uncertainties and legal risks continue to exist. Knowing this, the deployment of DLT and more specifically blockchain technologies require a public awareness campaign undertaken by the government and the House of Representatives in collaboration with the relevant stakeholders, but also requires a reform of Cyprus’ education system in order to prepare future generations to engage with digital technologies.

As you all know, the current state of regulation in regards to DLT remains uncertain, and there are many different perspectives on which governance structure to adopt. It is crucial to develop a unified regulatory framework in order to unlock these exciting technologies to their full potential.

Cyprus has a well-deserved reputation for quality financial services. New technologies present a unique opportunity in transforming the national product, where Cyprus can be one of the leading centres for innovation and growth globally, by having a strong technological infrastructure and an innovative regulatory framework. In this way, existing international and cross-border transactions can be further leveraged for the implementation of DLT and focus should be geared towards transforming the sectors of energy, shipping, finance, as well as the provision of Public Services.

In other words, the Republic of Cyprus has the opportunity to become a major digital hub for Blockchain developments, and we can already see these developments coming into fruition. It is my belief that we must not be complacent to this phenomenon as that will only leave Cyprus unable to compete in today’s constantly evolving world. Distributed Ledger Technology and more specifically, Blockchain, can offer endless possibilities in many different fields and not only can it be the driving force of economic growth, it will eventually become part of our daily life.

The European Union has acknowledged Blockchain’s potential impact on the economy, and has already taken steps to build upon this, and by doing so it will continue to remain competitive within the international arena. The European Blockchain Partnership, which Cyprus signed last year in June, will enable close cooperation between the European Member States so as to ensure wider deployment of blockchain-based services, and contribute to the creation of a Blockchain-friendly environment that will be in full compliance with EU laws.

As it currently stands, the European Parliament has taken a positive but neutral approach towards Blockchain and aims not to directly regulate it, but rather to remove the currently existing barriers that prevent Blockchain from being legally implemented. While the European Union has made a move towards the right direction, there are many economic and regulatory obstacles that need to be overcome and this is crucial for encouraging companies to experiment with the endless possibilities of Blockchain technology.

Cyprus has undertaken a proactive stance towards Blockchain and following an initiative from the House of Representatives and in collaboration with the Minister of Finance, a special ad hoc Committee was created last August. This Committee’s primary objective is to support and advise on the appropriate framework that will be required in enabling a smooth transition towards using Blockchain in different applications, as well as ensuring that the public sector in Cyprus will be able to follow international developments regarding DLT technologies.

The ad hoc Committee will permit the government to assess and seize this substantial opportunity that has been presented by driving the right level of awareness and clarity needed to facilitate and adopt the use of Blockchain. Therefore, in cooperation with the other European Members along with leading DLT/Blockchain experts, Cyprus will endeavour to promote the rapid development of this exciting technology, so that the Cypriot economy can adopt new models of administration that will enable the business world to grow.

However, such an ambitious aim will not be without its challenges, and there will be a number of issues that will have to be addressed. The creation of the regulatory framework should be flexible, so that it will promote innovation and provide legal certainty and protection for both consumers and investors. Of course, an impact assessment will have to be undertaken in every sector of the economy in order to identify sectors where the benefits of the deployment of DLT technology can be maximised. Emphasis will be given to the impact of Blockchain on the labour market, as well as the availability of training programmes that will provide the necessary skills needed for the new employment opportunities which will be created.

Therefore, with the European Blockchain Partnership in mind, Cyprus has gone further and along with six other southern European Member States, proceeded to sign a joint ‘Declaration of the Southern Mediterranean Countries on Distributed Ledger Technologies’ in December 2018. The purpose of the above is to enhance cooperation in the digital sector and to render Southern Europe as a leader in emerging technologies such as DLT.

This particular Declaration can be considered to be significant, as the current Cyprus National Strategy on DLT seeks to build upon it, aiming to promote better understanding and proper implementation of DLT and Blockchain in both the public and private sector in Cyprus, so that it will be in line with the Partnership and the Declaration’s stipulations.

Hence, the Government’s current Strategy will set out to establish Cyprus to be among one of the leading Blockchain centres globally where innovation can be widely utilised. The Strategy will provide a comprehensive framework for examining the applications of Blockchain and DLT in general, across different sectors and address the risks that might arise.

Thank you for listening.

Address by the President of the House of Representatives, Mr Demetris Syllouris, at the Cultural Festival organized by the High Commission of India

Address by the President of the House of Representatives, Mr Demetris Syllouris, at the opening ceremony of the Meeting of the Secretaries General of the Conference of the European Justice and Peace Commissions

Address by the President of the House of Representatives, Mr Demetris Syllouris, on the occasion of a talk on the “Indian Constitution”

Address by the President of the House of Representatives, Mr Demetris Syllouris, on the event “13th Kivotos Golden Lady” Woman of the Year Award 2019, in Lefkosia

Address by the President of the House of Representatives, Mr Demetris Syllouris, at the event #UKalumniCY: celebrating UK-Cyprus links in education