Recent News
Photo Album – Foreign Affairs Minister at EU Foreign Affairs Council
Definitions of Ground Elevation terms as used in everyday weather bulletins
President Anastasiades to attend the 5th World Holocaust Forum
Announcement by the Presidency of the Republic regarding the illegal activities of Turkey within Cyprus’ Exclusive Economic Zone
Tourist Arrivals: December 2019 Tourist Arrivals +3,5%
Harmonized Index of Consumer Prices (HICP): December 2019 Annual Rate of Change 0,7%
Brexit deal at the centre of Interior Minister Nouris’ contacts in London
The Press and Information Office presented a photographic exhibition by Adonis Christoforou in London
Photo album – The Interior Minister at a meeting with the Minister of State for Europe of the United Kingdom
Photo album – The Interior Minister at a meeting with the High Commissioner of the Republic of Cyprus in Britain

The harmonized index of Consumer Prices increased by 0,3% in June 2019 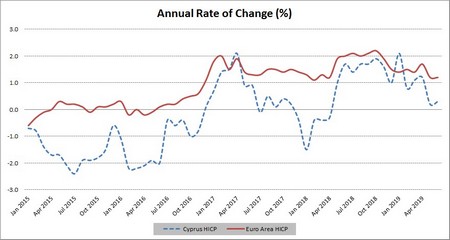 Compared to June 2018, the largest change was noted in category Housing, Water, Electricity, Gas and Other Fuels with a change of 5,3%. (Table 1)

For the period January-June 2019, compared to the corresponding period of the previous year, the largest change was noted in Housing, Water, Electricity, Gas and Other Fuels (7,4%). (Table 1)

As regards the economic origin, the largest change when comparing both to the index of June 2018 and to the index of the previous month was observed in category Serviceswith percentages of 2,3% and 2,8% respectively. (Table 2)

The Harmonized Price Index (HICP) is an economic indicator constructed to measure the changes of prices over time of consumer goods and services acquired, used or paid by households and tourists within the economic territory of the country. The HICP is calculated according to a harmonized approach and methodology laid down by a series of regulations of EU.

The prices of 805 goods and services are recorded once every month, except for some seasonal products (e.g. vegetables and fruits), meat and fuels, whose prices are collected every week (every Thursday). The collected prices are those actually paid by consumers for the purchase of specific goods and services, and they include various taxes, such as the Value Added Tax and excise duties. For the calculation of the Index end-of-season sales prices are taken into account, as well as special offer prices which are available for the general public and have no restrictions.

House Price Index for the 3rd Quarter of 2019

Social Protection Survey in Cyprus for 2017

Issuing of bonds by the Republic of Cyprus