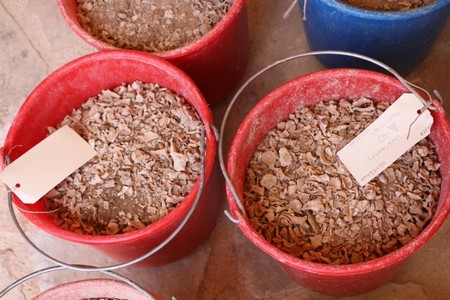 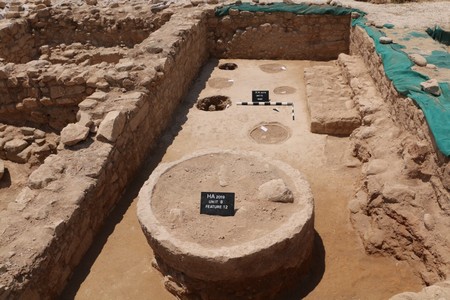 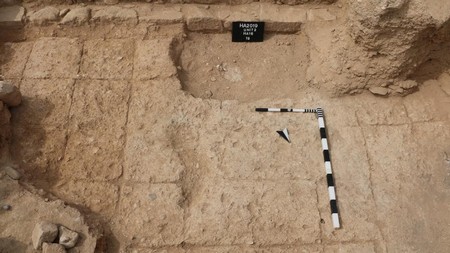 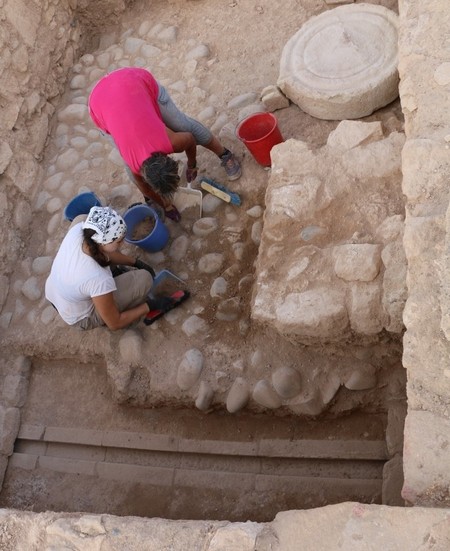 The Department of Antiquities of Cyprus (Ministry of Transport, Communications and Works) announces the completion of the 14th annual field campaign carried out by the University of Cyprus in Palaepaphos. The 2019 excavation season took place in May-June 2019; it concentrated on the plateau of Hadjiabdoulla, one kilometre east of the sanctuary of Aphrodite at Kouklia. The Palaepaphos Urban Landscape Project (PULP, for short), which has been running since 2006 under the direction of Professor Maria Iacovou (Department of History and Archaeology), has brought to light new monuments on the plateau. Unknown until recently, these impressive architectural complexes indicate that the plateau of Hadjiabdoulla functioned as the citadel, i.e. the administrative-economic centre, of the royal dynasty of Ancient Paphos during the Classical period (5th and 4th centuries BC).

Historical discovery: a Greek inscription in the Cypriot syllabary

In the last ten years (2009-2019), the University of Cyprus team has been digging an extensive production and storage complex that occupies the north side of the plateau. To this day, they have excavated 930 square meters - about 30% of the extent of the complex - and have identified eight distinct units and circulation corridors, whose stone walls survive to almost 2 m. in height. This season’s major discovery was a small sherd that carried an inscription in black ink. The inscription, which is in the Greek syllabary of Cyprus, was read on the same day by Dr Artemis Karnava, one of PULP’s s research associates. It preserves a fragmentary list with quantities of products and it reveals that the kings of Paphos were keeping an economic archive. To this day, the only other royal citadel where such an archive has been identified is that of Idalion, where hundreds of inscriptions were found in the Phoenician alphabet. The Palaepaphos sherd inscription will redefine many historical facts concerning the economic management system of the Cypriot city-states.

Units 1-8: In the course of the 2019 field season, the team completed the excavation of Unit 5, where a mill stone basin of soft limestone was found. The pebbled floor of the Unit rested on top of an earlier floor that carried drains leading to a bath-tub in Unit 6.

The investigation of Unit 7 confirmed the presence of rooms above the ground floor units, whose floor was made of smooth plaster. The roofs were covered with large tiles decorated with red bands. West of Unit 7, excavations revealed an extraordinary unit of 25 sq. m., with an exceptionally well-preserved plastered floor. Unit 8 contains a mill stone basin, 1,5 m. in diameter. A pithos, 1,5 m. high was found sunken into the plastered floor. It is likely that Unit 8 was used for the crushing of olives, the first stage in the production of olive oil, but this will only be confirmed when all the samples have been analysed.

Finally, the team managed to empty Unit 2 (11 sq. m.) of its content: it contained 430 kilos of purple shells (murex). This massive depot of shells covered a floor made of mudbrick tiles;the shells had been collected for secondary processing after the production of the dye. The precious purple dye was produced in various coastal centres of the Mediterranean since the Bronze Age but the stages of its industrial production remain little known. Following the above discovery, the Archaeological Research Unit of the University of Cyprus and the Institute for Aegean Prehistory Study Center for East Crete decided to co-organise an international meeting on ThematerialityofpurpledyeproductionanduseinCyprusandtheAegeanfromPrehistorytotheLateRomanperiod. The meeting, which will take place on 1-2 November 2019, is sponsored by the A.G. Leventis Foundation.

The Department of Antiquities of Cyprus has decided to take temporary measures to protect the material remains of the Hadjiabdoulla complex. To prevent deterioration of stone, mudbrick and plastered features, the most sensitive units have been reburied.  In 2020 the excavation of the complex will continue towards the East.

Applications for the management of Sotira Ammochostos Postal Agency

Announcement by the Cyprus Post regarding commemorative stamp issues

Applications for the management of Spilia Postal Agency