The President of the Republic, Mr Nicos Anastasiades, received the credentials of the Ambassador of the Kingdom of Saudi Arabia to the Republic of Cyprus, Mr Khaled Mohammed Al Sharif, during a formal ceremony held at the Presidential Palace on Thrusday, September 5, 2019.

It is with great honor that I present the Letter of Credence, which the Custodian of the Two Holy Mosques, King Salman Bin Abdulaziz Al Saud, has addressed to Your Excellency, accrediting me as Ambassador Extraordinary and Plenipotentiary and General Consul of the Kingdom of Saudi Arabia to the Republic of Cyprus.

I take this opportunity to convey to Your Excellency the warmest regards of the Custodian of the Two Holy Mosques, his best wishes to you for health and happiness, and to the Government and the friendly people of Cyprus for continued progress and prosperity.

I would like to mention that, it is a privilege for me to be the first resident Ambassador of the Kingdom of Saudi Arabia to the Republic of Cyprus, and I express my deepest gratitude for the warm welcome that I received from the Government and the people of Cyprus.

Your Excellency’s visit to the Kingdom of Saudi Arabia in 2018, which was the first visit of a Cypriot President to the country, to meet the Custodian of the Two Holy Mosques, King Salman Bin Abdulaziz Al Saud in Riyadh, as well as your second meeting with the King in Sharm El Sheikh in 2019, were important milestones in our bilateral relations.

Furthermore, the establishment and operation of the Cyprus Embassy in Riyadh in 2015, and the opening of the Royal Embassy of Saudi Arabia in Nicosia in 2018, marked the beginning of a new era in our diplomatic relations and were a promising start for further cooperation between our two countries.

At this point, I would like to assure you that, during my tenure in office, I will exert all my efforts to upgrade our relations to a higher level, to deepen our friendship, and to expand the mutually beneficial cooperation between our two countries in various fields.

As an Ambassador, I firmly believe that, in carrying out this honorable and important mission, I will receive support and assistance from Your Excellency and your Government.

Lastly, I wish you, Mr President, every success in your efforts to reach a comprehensive solution of the Cyprus issue.

It is with distinct pleasure and sincere feelings of friendship that I receive today your Letters of Credence appointing you as the first resident Ambassador of the Kingdom of Saudi Arabia to the Republic of Cyprus. I would like to assure you that my Government will provide you with every assistance in the performance of your high duties aiming at building upon the excellent bilateral relations that have developed between our two countries.

Over the past five years, our relationship has developed significantly, leading to concrete and effective cooperation of pragmatic value, in various crucial fields of shared interest.

Within this context, it was a great privilege to be the first President of the Republic of Cyprus to have visited the Kingdom last year. This historic visit has served as a vital stepping stone for the development and expansion of our bilateral relations, in an array of fields, including political, commercial, security and cultural relations. I am especially pleased to have signed a number of important bilateral agreements during this visit, which I am certain will provide further impetus to the expansion of the economic, commercial, financial and investment ties between our countries.

I am confident that your accreditation as the first resident Ambassador of the Kingdom of Saudi Arabia in Cyprus and the establishment of a fully-fledged Embassy will serve towards the goal of the further enhancement of the relations between our two countries.

I was also very pleased to be informed of the upcoming visit of the Minister of Foreign Affairs of the Kingdom of Saudi Arabia, H.E. Dr Ibrahim bin Abdulaziz Al-Assaf. This visit, which constitutes another important milestone in our flourishing bilateral relations, will offer the opportunity to exchange views on pressing regional and global developments and challenges.

The current economic situation in Cyprus is one of renewed opportunity, optimism and good prospects. Following the severe economic crisis of 2013, Cyprus has achieved a return to positive growth rates since 2015. We currently enjoy a growth rate of around 3.5%, while macroeconomic forecasts project a robust growth of more than 3% in the years to come.

Furthermore, we have achieved consecutive balanced budgets, with primary surplus, while unemployment, which in 2013 had risen to 16%, has dropped to almost 7% and is expected to be reduced even further.

The banking system, re-focusing its operations and fully adhering to the strictest international transparency and compliance regulations, is now based on a stronger and healthier base in terms of capitalization, liquidity and profitability. Remarkable progress has also been achieved with respect to non-performing loans.

The positive course of the Cypriot economy as well as effective actions in the banking sector have strengthened the confidence of investors and of International Credit Rating Agencies, which is reflected by a number of successive upgrades, currently classifying Cyprus at the investment grade. Our plan is to remain focused on maintaining and broadening the conditions under which surpluses and high growth rates can be generated, to continue promoting structural reforms and improving the country’s business environment.

The Republic of Cyprus highly values Saudi Arabia’s consistent support to our efforts to reunify Cyprus. We continue to ask of you to maintain your principled stance on the Cyprus problem and continue contributing to the efforts to promote positive and forward looking OIC Resolutions on Cyprus, in line with the relevant UN Security Council resolutions, which can contribute towards the positive outcome of the negotiation process of the Cyprus issue.

On my own behalf, I wish to assure you, of my unwavering commitment to the peace process under the United Nations Good Offices Mission and to continuing the negotiations on the six-point framework the UN Secretary-General has set as the basis for the way forward.

The reunification of Cyprus and its people after 45 years of Turkish occupation is long overdue. In the face of this perpetuated injustice, the aim of reaching a lasting and comprehensive settlement, which would safeguard the sovereignty, independence and territorial integrity of the Republic of Cyprus, without any third country dependencies, military troops and guarantees, cannot wane.

At the same time, we do hope that our Turkish Cypriot compatriots will fully abide to the relevant UN Security Council Resolutions which call for the return and resettlement of Varosha by its rightful and lawful owners and inhabitants and abandon their actions or any plans which are in clear violation of the 1979 High-Level Agreement between the leaders of the two communities and the UN Security Council Resolutions 414(1977), 442 (1980), 550 (1984) and 789 (1992).

Unfortunately, the negotiating process remains at an impasse since the Conference on Cyprus of July 2017. This impasse is attributed exclusively to the intransigent stance of Turkey which, instead of being positively predisposed to establishing a truly independent, sovereign and normal state, through its proposals aims at reducing Cyprus to a Turkish protectorate.

In order to resume the negotiations, it remains imperative to contribute to a conducive environment for a settlement, which would allow the dialogue to resume on the basis of good will and constructive stance from all stakeholders, and particularly the Turkish side.

Regrettably, the current illegal actions by Turkey in Cyprus’ Exclusive Economic Zone have extremely negative consequences, including on the prospects of resuming the dialogue.

Regarding Turkey's illegal actions in the Eastern Mediterranean and their deleterious effect on good neighbourly relations, we will continue to count on the strong support of the international community, to call upon Turkey to respect the sovereign rights of Cyprus in its Exclusive Economic Zone, respect customary international law as reflected in the United Nations Convention on the Law of the Sea, and refrain from all illegal actions.

In welcoming you to Cyprus, I would kindly request that you convey to The Custodian of the Two Holy Mosques, King Salman Bin Abdulaziz Al-Saud, as well as to the Government and to the friendly people of the Kingdom of Saudi Arabia my warmest greetings and a message of sincere friendship and solidarity. I conclude by assuring you, once more, of the support of my Government to your valuable mission, so that your tenure will be both constructive and fruitful, and carried out in such a way that the sound relationship that Cyprus enjoys with Saudi Arabia will further flourish.

Ambassador Khaled Al Sharif I warmly welcome you to Cyprus”. 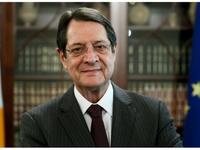