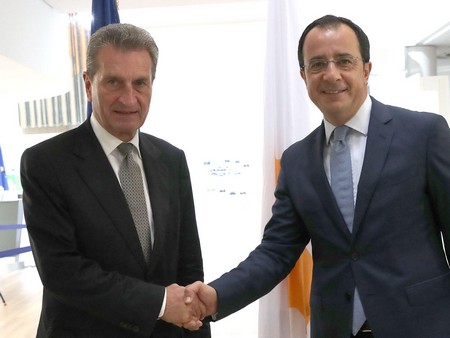 Statement by Minister of Foreign Affairs, Mr. Nikos Christodoulides, after meeting with the European Commissioner for Budget and Human Resources

I am very pleased to welcome to Cyprus the European Commissioner for Budget and Human Resources, Mr Günther Oettinger.

Even though we maintain regular contact, not least in the context of the ongoing negotiations for the Multiannual Financial Framework, I very much appreciate that the Commissioner has taken the time to visit Nicosia, so that we could hold an in-depth exchange of views with him on this, as well as on other issues of common interest.

I wish to use this opportunity to express, publicly also, our deep appreciation to Günther and his team, for the fine job they are doing in negotiating the MFF. There is no doubt that they have a difficult task in their hands, taking into consideration also the tough timeframes that exist for reaching an agreement, but we have full confidence in their ability and in the collective will of all our partners to succeed.

In this regard, I would like to reiterate that Cyprus has been one of the strongest advocates of reaching an agreement on the MFF by the end of the year, in the spirit of the relevant European Council's conclusions of June 2019. We are of the opinion that any delay could impact negatively on the timely initiation of programmes and projects, sending the wrong political message about Europe’s capacity to deliver on time.

During our meeting, we had a broad and constructive exchange of views on a number of issues relating to the MFF, focusing naturally on issues of particular relevance and importance to Cyprus.

We discussed the latest developments and the current state of play in the negotiations, and we exchanged views on the next steps, always in line with the European Council's conclusions of last June.

On my part, I highlighted, in particular, the request that Cyprus has submitted both to the European Commission as well as to the Finnish Presidency, for additional assistance through the new MFF. This request emanates from and reflects the unique challenges that Cyprus is faced with due to a combination of factors, namely the small size of our country’s territory, the fact that unlike most of its EU partners Cyprus is an island State, that is situated on the periphery of the Union.

I am optimistic, dear Günther, counting on your support as well, that Cyprus will be allocated appropriate and sufficient resources in the next MFF to face these challenges, as was the case in the current MFF.

Like I said, we also exchanged views and compared notes on a number of other important issues currently on the European agenda and challenges that our common family is facing, including of course Brexit. On the latter, we naturally share the hope that it will be possible in the end for the UK to exit in an orderly fashion, and this is why the 27 partners, along with the Commission, have urged the UK to put forward operational ideas that are compatible with the existing Withdrawal Agreement.

Dear Günther, before giving you the floor, I would like to warmly thank you once again for your visit and the very constructive meeting we had.

The Minister of Foreign Affairs of Norway will visit Cyprus