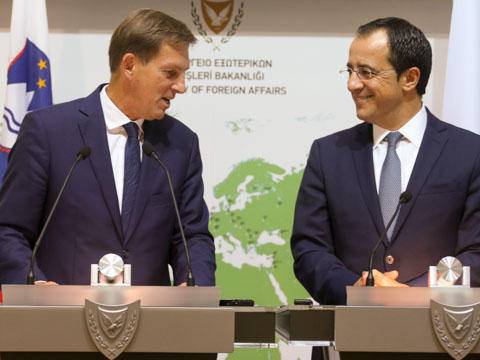 I wish to extend a very warm welcome to the Minister of Foreign Affairs of Slovenia, my dear friend Miro Cerar, and the members of his delegation.

We had the opportunity this morning to review the full spectrum of our bilateral relations, as well as to compare notes on a number of topics that are high on the agenda of the European Union, in the aftermath of course of the discussions we had in Luxembourg on Monday, during the EU Foreign Affairs Council. We also exchanged views on various pressing issues unfolding in our region and beyond, that are of common interest or concern.

We noted with satisfaction that our bilateral cooperation is at a very high level, benefiting also from the additional momentum created by the visit of President Anastasiadesʼs to Slovenia last January. Moreover, we reaffirmed with Miro that we share common goals and aspirations in a number of areas, from foreign policy issues, to human rights and multilateral cooperation.

As always, there is plenty of room for further improvement and we therefore identified with my good colleague concrete areas and thematics in which we could strengthen our cooperation, such as trade and investment, as well as through enhancing our consultations, both at a bilateral level and within the framework of the European Union.

The organization of the Cyprus-Slovenia Business Forum earlier today with the participation of business people from both countries, is a testament to our determination to take concrete steps in order to pursue stronger trade relations and promote business opportunities between Cypriot and Slovenian business people, as well as to further boost people-to-people contacts.

As small European countries that are located in regions that are of particular strategic importance to the European Union and not only, we also held a very useful exchange of views on our respective regional perspectives:

On my part, I briefed Miro on the progress of a series of trilateral cooperation initiatives that Cyprus has undertaken, together with Greece, with countries in the Eastern Mediterranean region. I explained how these initiatives are beneficial to all parties, as well as to the EU and its member states, as they are designed to foster synergies and enhance dialogue and understanding, thus strengthening the prospects of peace, stability and prosperity in the broader region.

On the Western Balkans, I am grateful to Miro for sharing his insights with me. In this context, I stressed on my part the importance we attach to safeguarding the credibility of the EU vis-à-vis the European perspective of the countries of the region.

As you might expect, we also discussed the situation in Syria – less than a hundred kilometers away from the shores of Cyprus - expressing our deep concern with the situation and especially the developments in the north-east part of the country.

While we are waiting to be fully informed on last nightʼs developments, we are convinced, in line with the conclusions of the Foreign Affairs Council of the EU, that any act that is contrary to international law seriously undermines the stability and security of the whole region, resulting in more civilians suffering and further displacement and severely hindering access to humanitarian assistance. It also makes the prospects for the UN-led political process to achieve peace in Syria far more difficult and, as such, we strongly condemn it.

As it was also expected, following the relevant discussions at the Foreign Affairs Council on Monday, we discussed Turkeyʼs illegal activities and aggressive behavior in the Exclusive Economic Zone and the territorial waters of Cyprus. The recent escalation of illegal activities on the part of Turkey, has been condemned in very clear terms, once more, on Monday by the Foreign Affairs Council of the European Union, and I would like to use this opportunity to express my deep appreciation to Miro for Sloveniaʼs support and solidarity during the relevant discussions that took place in Luxembourg.

As I have explained to Miro also today, Turkey’s illegal activities are regrettably also detrimental to the efforts of the UN Secretary General – whom we fully support - to create an environment that is conducive to the resumption of negotiations from the point where they were suspended in July 2017, aimed at a settlement of the Cyprus problem that will reunify the island on the basis of a bi-zonal bi-communal federation, in line with relevant Security Council resolutions.

I will stop here, welcoming once again my dear friend Miro to Cyprus and I look forward to continuing our fruitful deliberations over lunch.