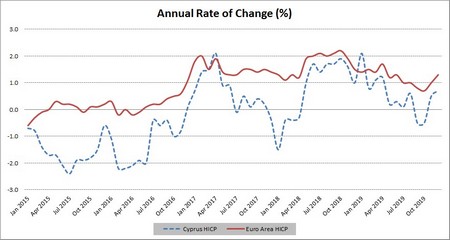 Compared to December 2018, the largest change was noted in the category Transport (2,9%).

Compared to November 2019, the largest change was also recorded in the category Transport (-2,3%). (Table 1)

For the period January - December 2019, compared to the corresponding period of the previous year, the largest change was noted in Housing, Water, Electricity, Gas and Other Fuels (3,9%). (Table 1)

Joint Statement by the bicommunal Technical Committee on Health

Address by the First Lady of the Republic of Cyprus, Mrs. Andri Anastasiades, at the 13th Cyprus-Russia Gala at the Presidential Palace

Readout of the Secretary General’s meeting with the President of the Republic of Cyprus, Mr Nicos Anastasiades,

Readout of the Secretary General’s meeting with Mr. Kyriakos Mitsotakis, Prime Minister of the Hellenic Republic

The Chairman of Research and Innovation Foundation, Mr Kyriacos Kokkinos, announced his commitment to create 5G infrastructure in Cyprus at Cyprus IT Forum 2019