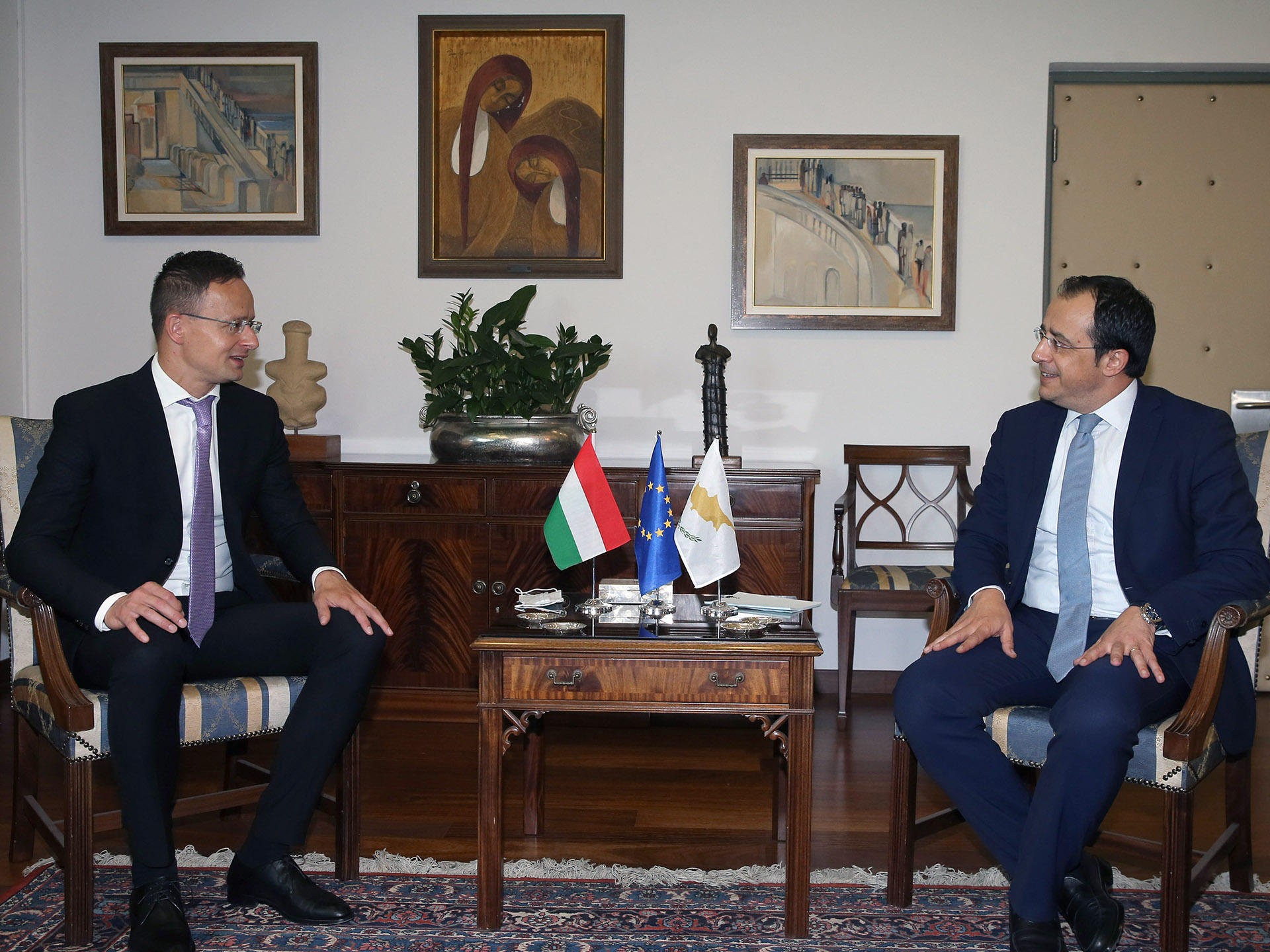 I am very pleased to welcome to Cyprus my good friend and colleague Péter and the members of his delegation. The fact that this is Péter’s third visit to Nicosia in the time that I have been in office, speaks to the value we both attach to maintaining an open and rich dialogue.

We had the opportunity in the course of our deliberations today to follow up on number of issues that are part of our rich bilateral dialogue. We also of course exchanged views on current issues from our European agenda, as well as on regional and international affairs and developments that are of common interest and concern.

The scale and impact of the COVID-19 pandemic has presented us with unprecedented challenges and highlighted the importance of working together with partners, both within and beyond the EU, in order to tackle the challenges that are shared. We noted with satisfaction that epidemiological results in both our countries have been consistently favourable, allowing for travel restrictions to be lifted already at the earliest stage. Within this context, we both welcome the recent decision by a major European airline based in Hungary to station three of its aircraft in Cyprus as a very positive development, that also helps to bring Cyprus and Hungary even closer together. There are already seven flights a week between the two countries and we have agreed with Péter that I will pay a visit to Hungary in September, together with a business delegation, to hold a bilateral Business Forum.

As I mentioned, today was a timely opportunity to compare notes with Péter and our delegations on a number of current issues from a European perspective, such as the ongoing negotiations for the next Multiannual Financial Framework and the Recovery Fund, which have taken an added importance in light of the grave economic impact of the pandemic.

With Péter, we also exchanged views on two other issues that are of key importance to the future of Europe, namely EU relations with the UK post-Brexit and the Conference on the Future of Europe. On both these issues, I think I can say that we share the opinion that it is vitally important for us collectively to safeguard EU unity and to keep our citizens’ welfare, prosperity and interests at the very centre of all our decisions.

In the course of our discussions, we also touched upon a number of regional issues. We discussed with concern the current state of affairs in Libya and in Syria, in light of the destabilizing actions in various parts of the broader region by certain actors.

On the back of the discussions I have had yesterday with HRVP Borrell, I also took the opportunity to brief Péter in depth on Turkey’s escalating provocations and illegal activities in Cyprus’s maritime zones, which constitute a flagrant violation of International Law and the UN Convention on the Law of the Seas and run contrary to the repeated calls from the international community, including by the EU, to refrain from such actions.

Before turning the floor to you, I wish to thank you for taking the time to visit Cyprus once again and I look forward to continuing our deliberations over lunch.