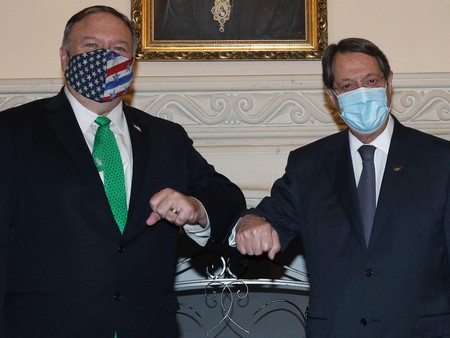 The President of the Republic received the US Secretary of State

The President of the Republic, Mr Nicos Anastasiades, held tonight, at the Presidential Palace, a meeting with the Secretary of State of the United States of America, Mr Mike Pompeo.

Mr Pompeo arrived at the Presidential Palace in the evening and held a meeting with President Anastasiades followed by their remarks to the Media.

In his remarks, the President said that «it is a distinct pleasure to welcome my dear friend, the US Secretary of State, Mr. Mike Pompeo.

Dear Mike: Your visit at a time when crucial developments are taking place in Eastern Mediterranean, due to Turkey’s illegal actions, aptly demonstrates the sincere concern and interest of the US in preserving stability in our region.

As we have discussed, these unlawful activities, despite repeated calls on Ankara to refrain from provocative actions, should be immediately terminated.

In this context, I expressed my deep appreciation to the US Government for its firm stance on condemning Turkey’s illegal drillings within our Exclusive Economic Zone, in full support to the unhindered exercise by Cyprus of its sovereign rights to explore and exploit its natural resources.

I also conveyed our full support to the US position that any disputes in the Eastern Mediterranean should be resolved through dialogue and not by gun-boat diplomacy.

Pertinent to the above, I informed the State Secretary of our readiness for the delimitation of our maritime zones north and west of Cyprus with Turkey, either through bilateral negotiations or by recourse to the International Court of Justice.

As it was expected, we also discussed the latest developments as regards the Cyprus Problem, during which I reiterated in the strongest manner my commitment for the resumption of the negotiating process from where it was interrupted at Crans Montana.

Nonetheless, as it is understandable, for negotiations to resume on the basis of good will, it is imperative that Turkey should terminate its aggressive and provocative actions, not only in our Exclusive Economic Zone but also in relation with Varosha.

To this end, I urged the State Secretary to adopt a proactive stance and exert every effort to stop Turkey from implementing any illegal actions or plans as regards the fenced area of Varosha, in violation of international law and the relevant UN Security Council resolutions.

Last, but not least, we also discussed with Mike the bilateral relations between our countries and we welcomed their significant advancement these past years, based on a positive agenda.

An agenda, which is characterized by our joint commitment and close co-operation, amongst others, in the fight against terrorism, human trafficking, drugs trafficking and in addressing common challenges and problems, particularly in our immediate region.

The smooth implementation of many aspects of the Statement of Intent exemplifies this upgraded level in our relationship, as also evident by the recent decision to partially lift the US arms embargo on Cyprus.

At the same time, the signing of a Memorandum of Understanding for the establishment of a Cypriot Training Center, sends, yet again, a clear political signal as regards the new levels of our relationship.

Dear Mike: In welcoming you once again, please rest assured that my Government and I remain committed and determined to continue working closely together so as to further reinforce our mutually beneficial partnership, which, I believe, can be assessed as strategic.»

On his part the US Secretary of State said, among other things, that the talks with the President were about the fast-growing diplomatic security and economic partnership between the Unites States of America and the Republic of Cyprus. He added that the two countries share the same values, pointing out that «our relationship has never been better and I am proud of that.»

Mr Pompeo noted that the security cooperation between the two countries is growing, and underlined that on September 1st he announced a US decision to temporarily waive export controls on direct commercial sales of non-lethal defence articles and services for the Republic of Cyprus. He added that in July the US invited Cyprus to participate in its military training programme something he said was «a big deal».

He also referred to the Memorandum of Understanding he signed tonight with the Foreign Minister of the Republic of Cyprus, Mr Nikos Christodoulides.

He pointed out that countries in the region should resolve disagreements, including on security and energy resource and maritime issues, diplomatically and peacefully.

He also noted that increased military tensions help no-one but adversaries who would like to see division in transatlantic unity, pointing out that regional cooperation is absolutely necessary for durable energy security, the creation of new markets and economic prosperity in the Eastern Mediterranean.

We also believe, he added, that the resources of Cyprus should be shared equitably among Greek Cypriots and Turkish Cypriots and added that the US continues to support a comprehensive settlement to reunify the island as a bizonal bicommunal federation.