Recent News
High concentrations of dust in the air
Announcement by the Presidency of the Republic of Cyprus
Photo Album - The Minister of Defence visits Military Units and Outposts in the Forward Defence Line
October 25 - World Breast Cancer Day
Decisions of the Minister of Labour, Welfare and Social Insurance relating to the implementation of the Special Schemes for the period of October 2020
Improvement on the briefing procedures of persons testing positive for the virus and their close contacts
Update of instructions for visits to Homes for the Elderly and Incapacitated, Child and Juvenile Protection State Institutions, and 24-hour Care Centres for the Disabled.
Mail services countries list
Priority services in retail establishments granted for citizens over 60 years-old and people with disabilities
Clarifications on organizing weddings and christenings 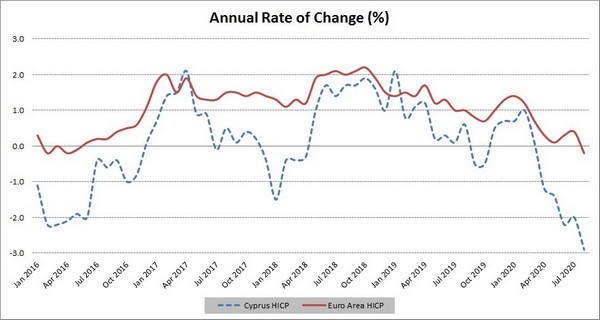 Compared to August 2019, the categories Transport and Housing, Water, Electricity, Gas and Other Fuels had the largest negative changes with percentages of 11,5% and 8% respectively, while Clothing and Footwear (3,8%) had the largest positive effect. (Table 1)

Compared to July 2020, the largest change was recorded in Food and Non-Alcoholic Beverages (2,2%). (Table 1)

For the period January - August 2020, compared to the corresponding period of the previous year, the largest change was noted in Transport (-4,8%). (Table 1)

The price collection is carried out only in urban districts of Lefkosia, Larnaka, Lemesos and Pafos. For each city, the fluctuations in the product prices each month are weighted according to their population. Specifically, the weights for the four districts are: Nicosia 42%, Limassol 30%, Larnaka 18% and Pafos 10%.

The implementation of precautionary measures and relevant decrees to address the negative consequences of COVID-19 disease had a direct impact on the price collection process of certain goods/services for the month of August 2020. As the problems anticipated were common to all Member States of the European Union they were tackled by applying the same methodologies under the supervision and guidance of the European Statistical Office (Eurostat).

International Day for the Eradication of Poverty