Cookies management by TermsFeed Cookie Consent
Recent News
Statement to the Press by the Minister of Foreign Affairs, Mr Ioannis Kasoulides, following his meeting with his Egyptian counterpart, Mr Sameh Shoukry
Written statement by the Deputy Government Spokeswoman, Ms Niovi Parisinou, on the meeting of the President of the Republic with the President of the OSCE PA
Photo Album - PoR – President of OSCE Parliamentary Assembly
Applications for the delivery of mail of Polis Chrysochous Post Office
Statement by the Permanent Representative of Cyprus to the UN, Ambassador Andreas Hadjichrysanthou, at the UN Security Council Open Debate on “Protection of Civilians in Armed Conflict”
The Minister of Agriculture presented on behalf of Cyprus, Lithuania, Luxembourg and Malta the position paper regarding an EU Positive List for the keeping of companion animals
Postal services to China resumed
Photo Album - PoR – Τeleconference with the President of the European Council
Working visit of the Minister of Foreign Affairs to Egypt
Intra & Extra EU Trade Statistics (By Commodity and Country), January – February 2022 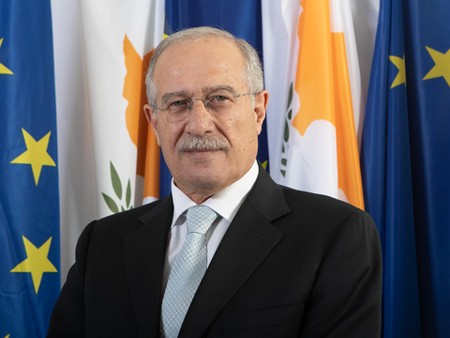 The President of the Republic Mr Nicos Anastasiades presided over a Council of Ministers’ meeting, today, at the Presidential Palace.

In his remarks to the media, following the Meeting, the Government Spokesman Mr Kyriakos Koushos said that “at today’s special Council Meeting, the Ministers of Finance and Interior submitted a proposal for the abolition of the current Investment Program.

The proposal was based on the long-term weaknesses, as well as the abusive exploitation of the provisions of the Cyprus Investment Program.

The decision will come into force on 1st November 2020.

The Government, after the completion of the investigation by the committee appointed by the Attorney General and the issuing of its conclusions, will comprehensively examine the policy for the encouragement of foreign investments.”

Photo Album - PoR – Τeleconference with the President of the European Council