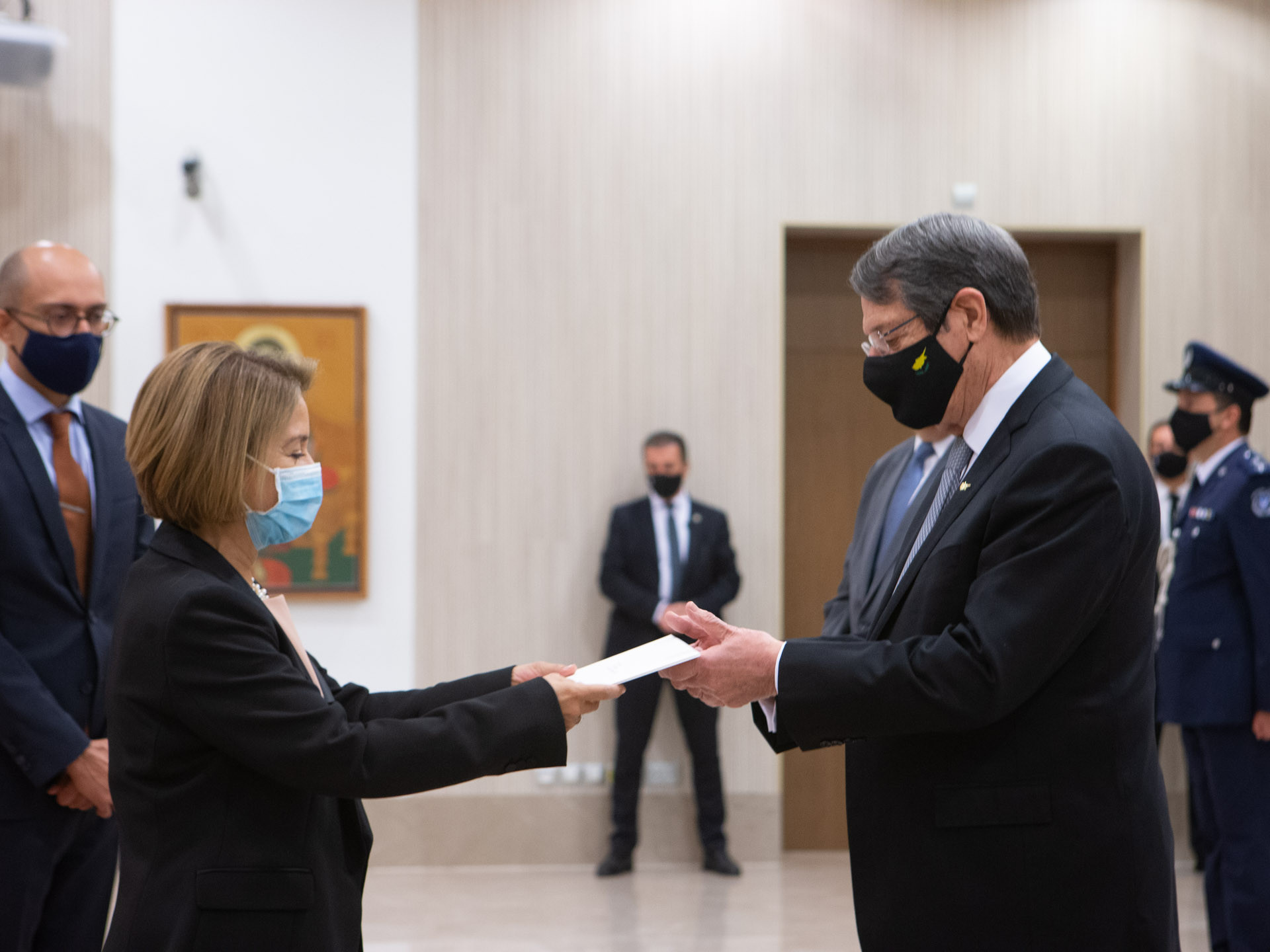 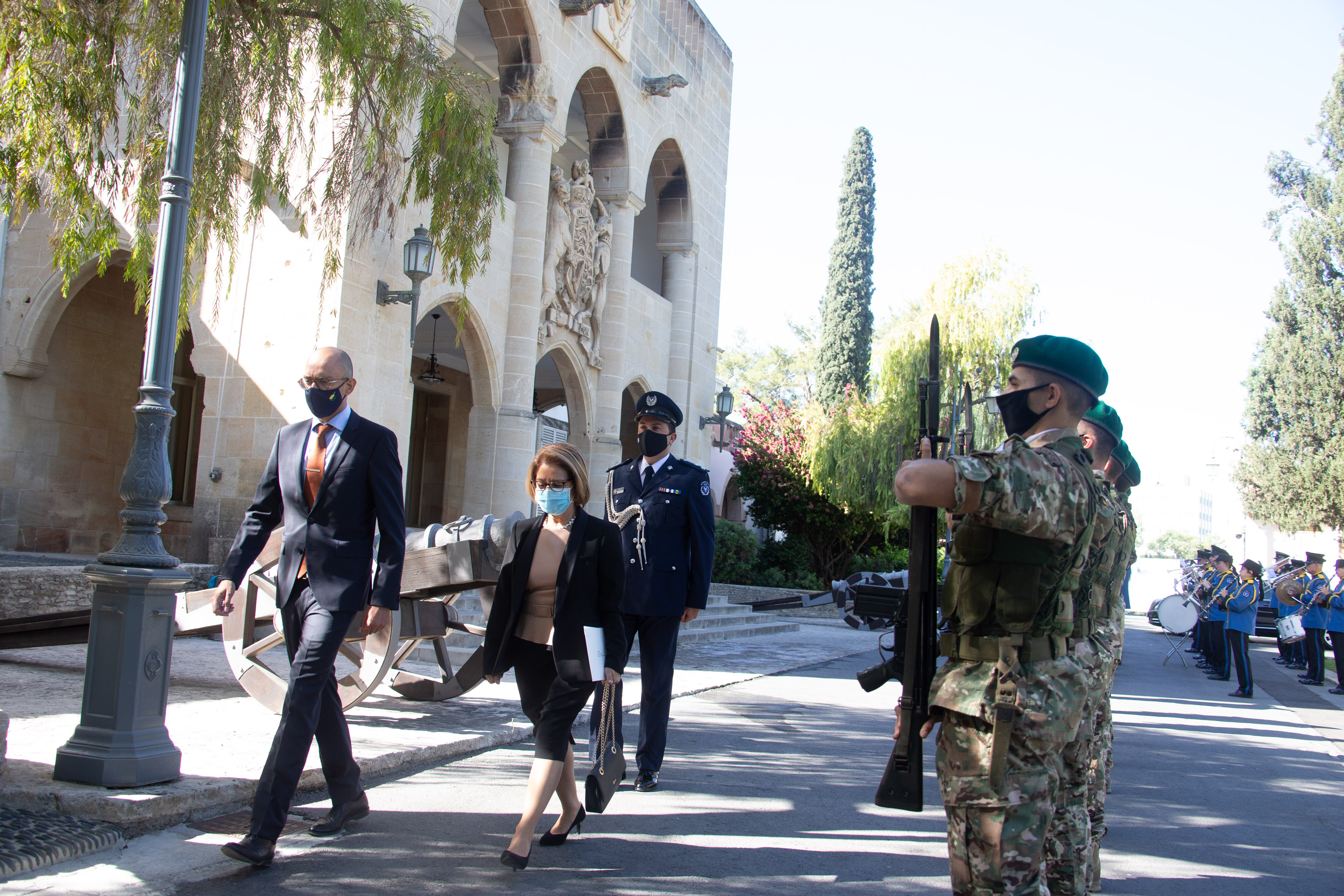 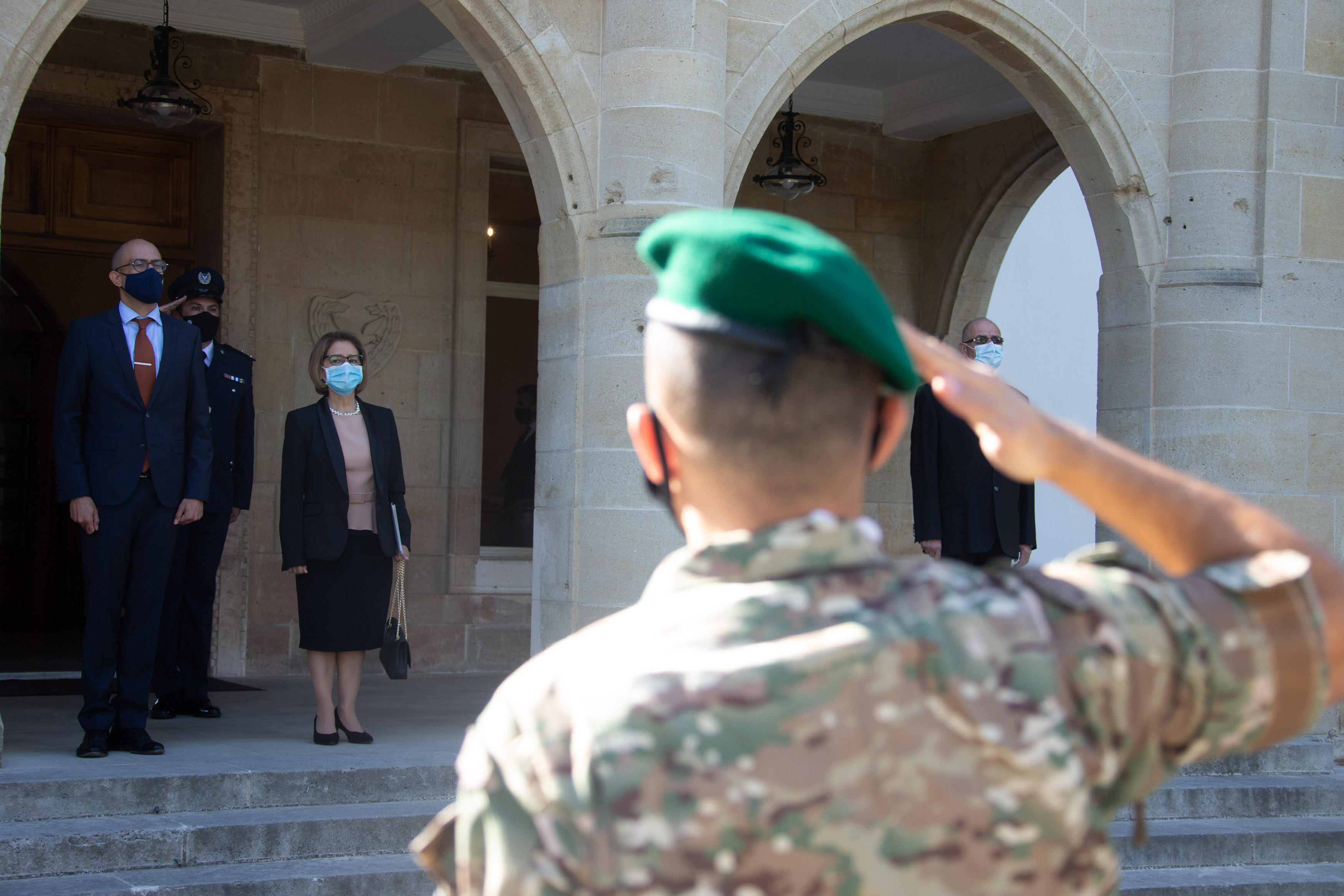 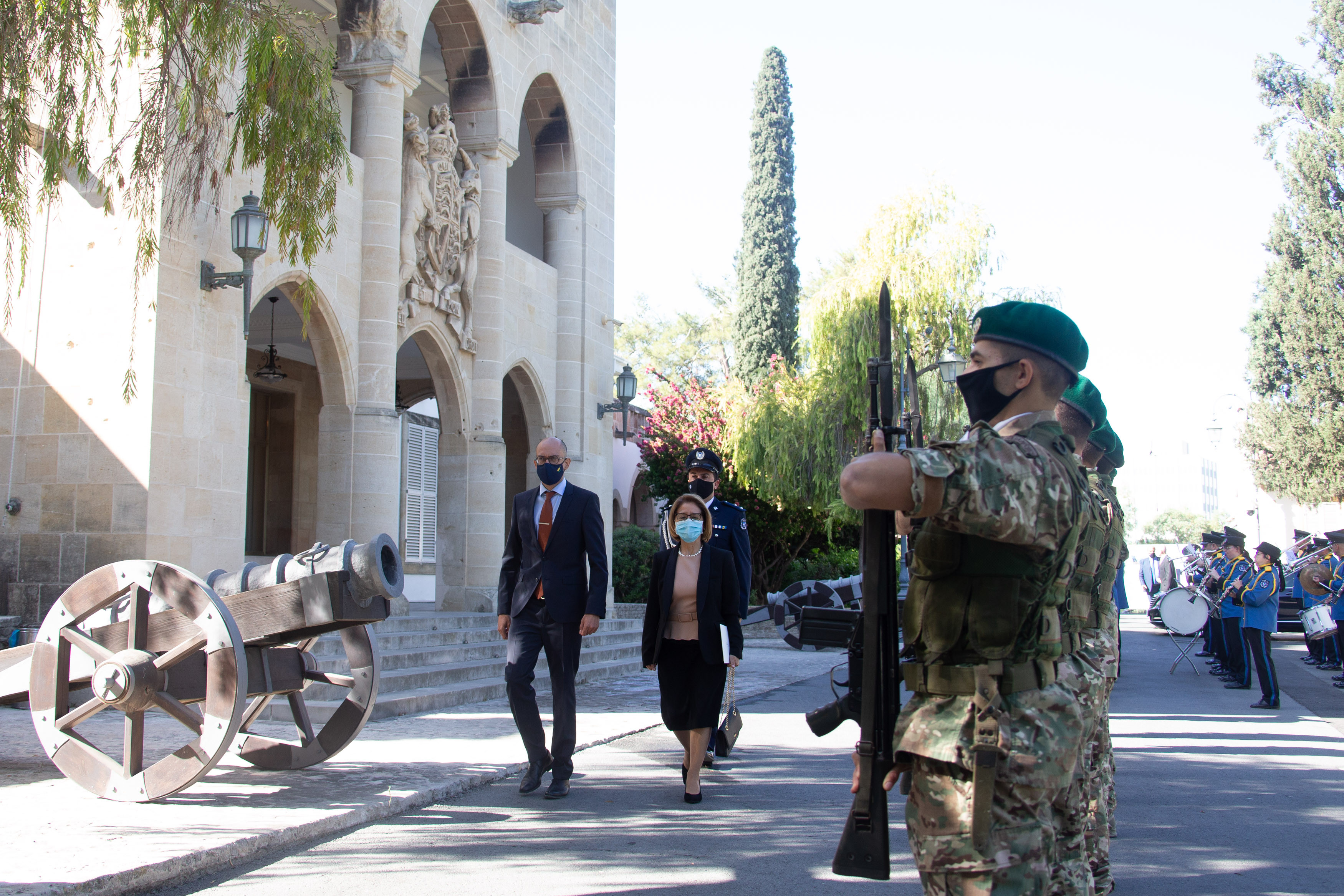 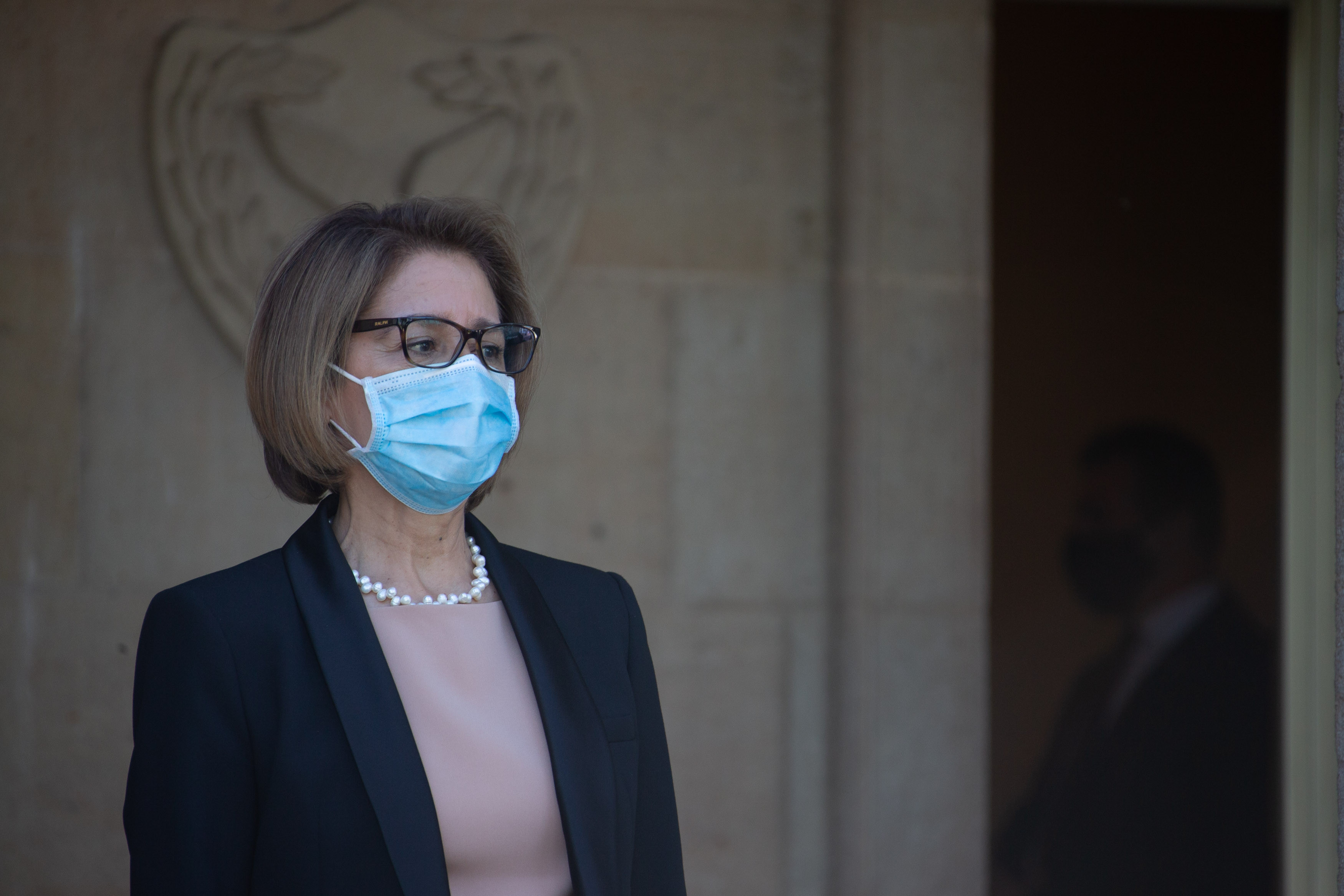 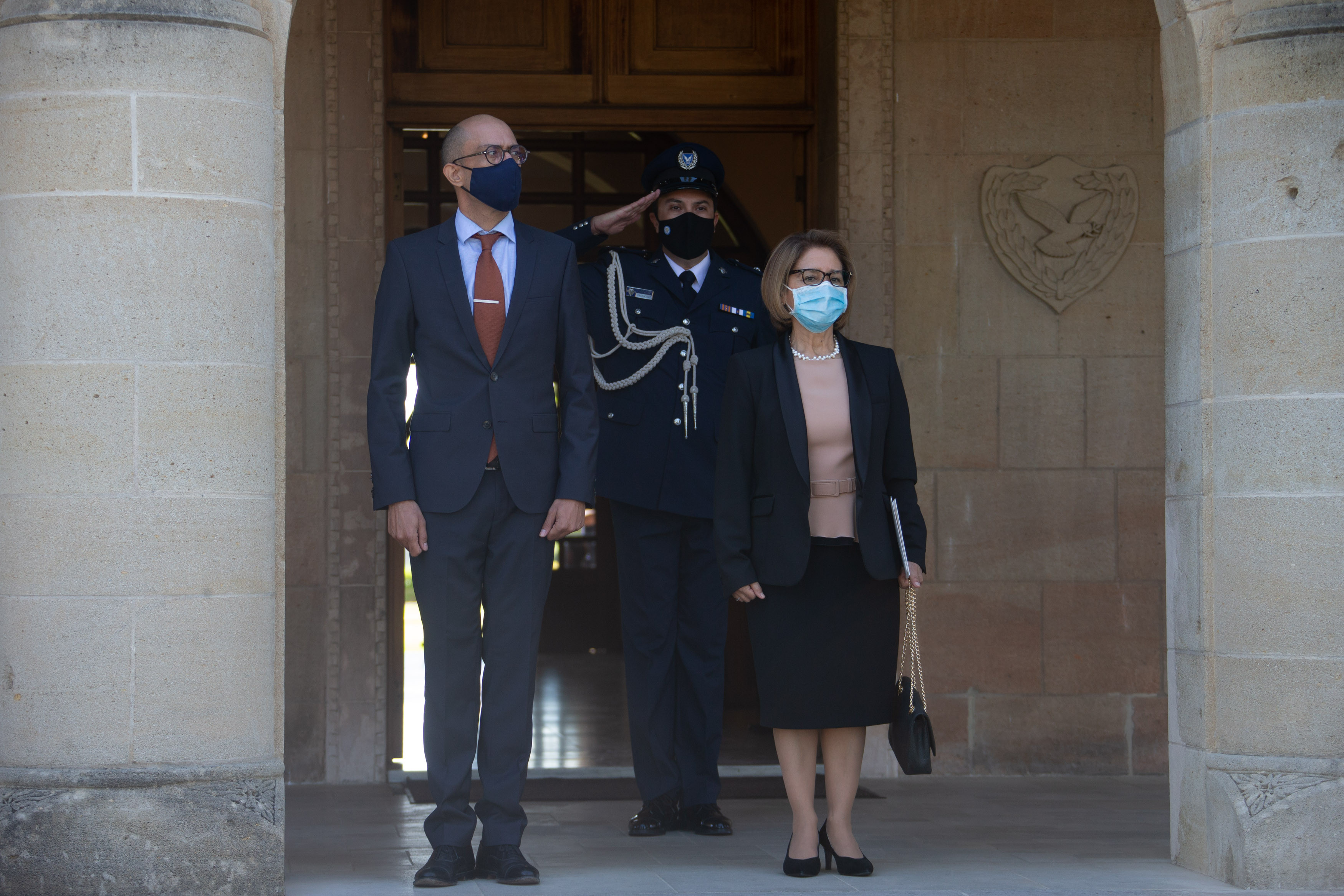 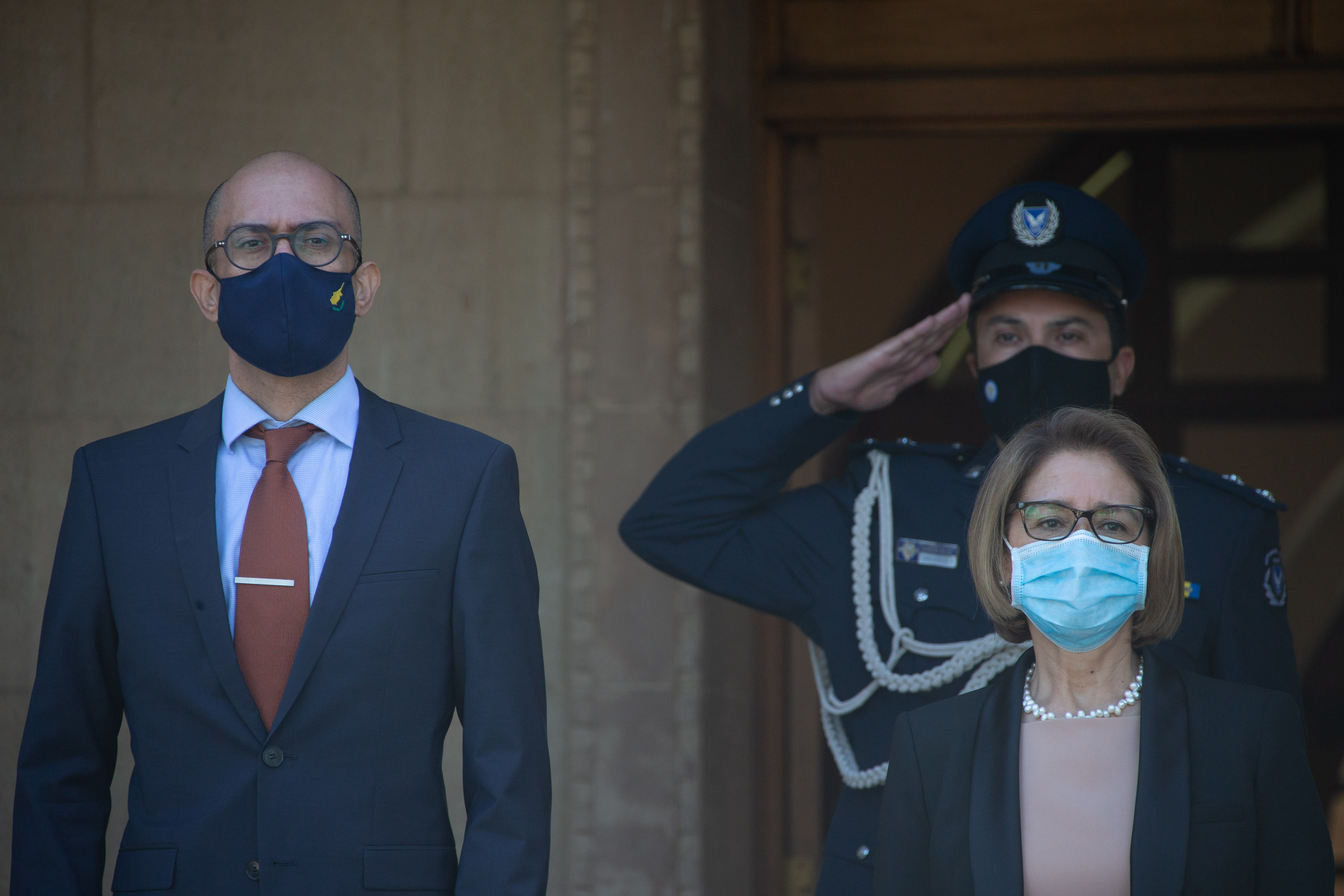 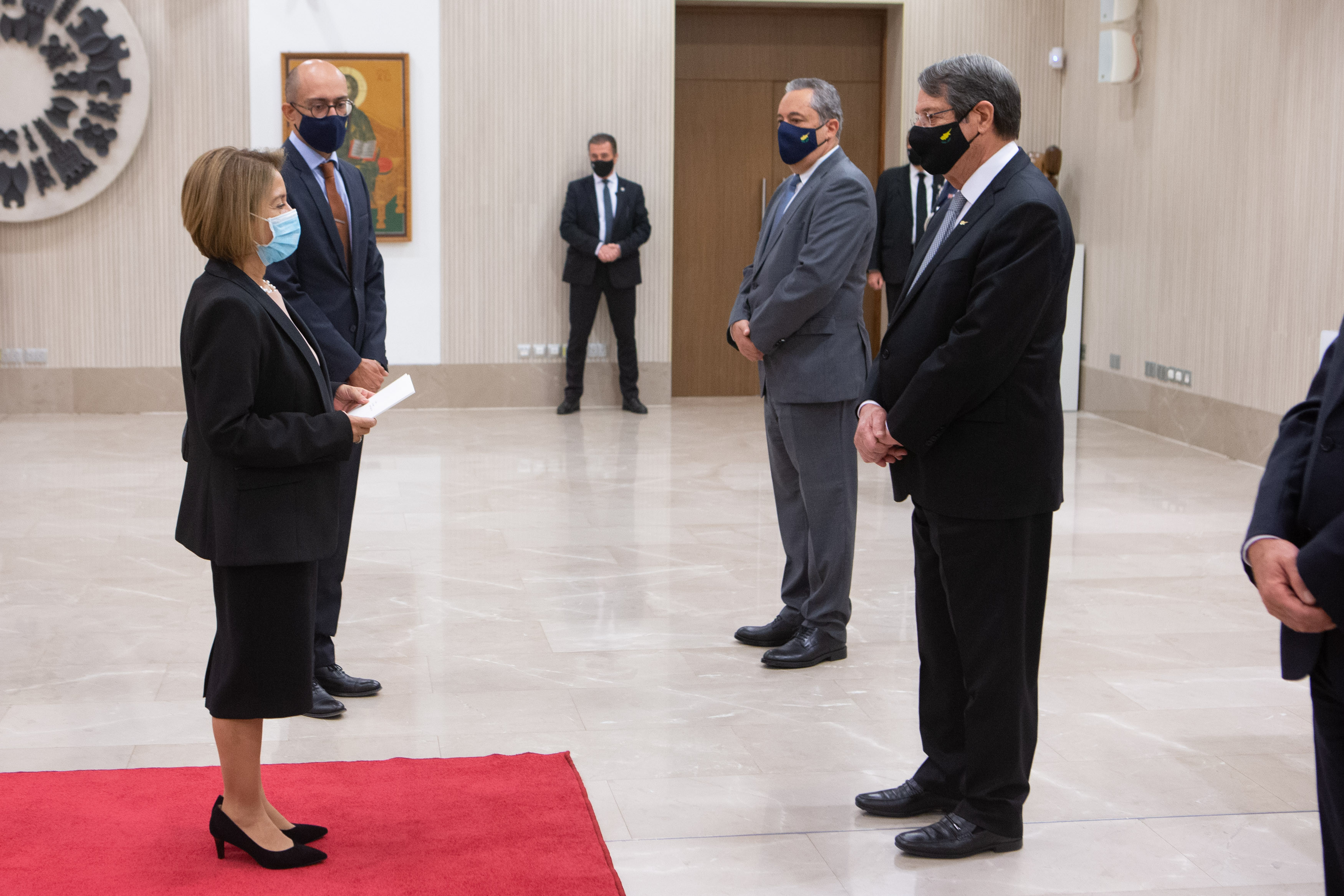 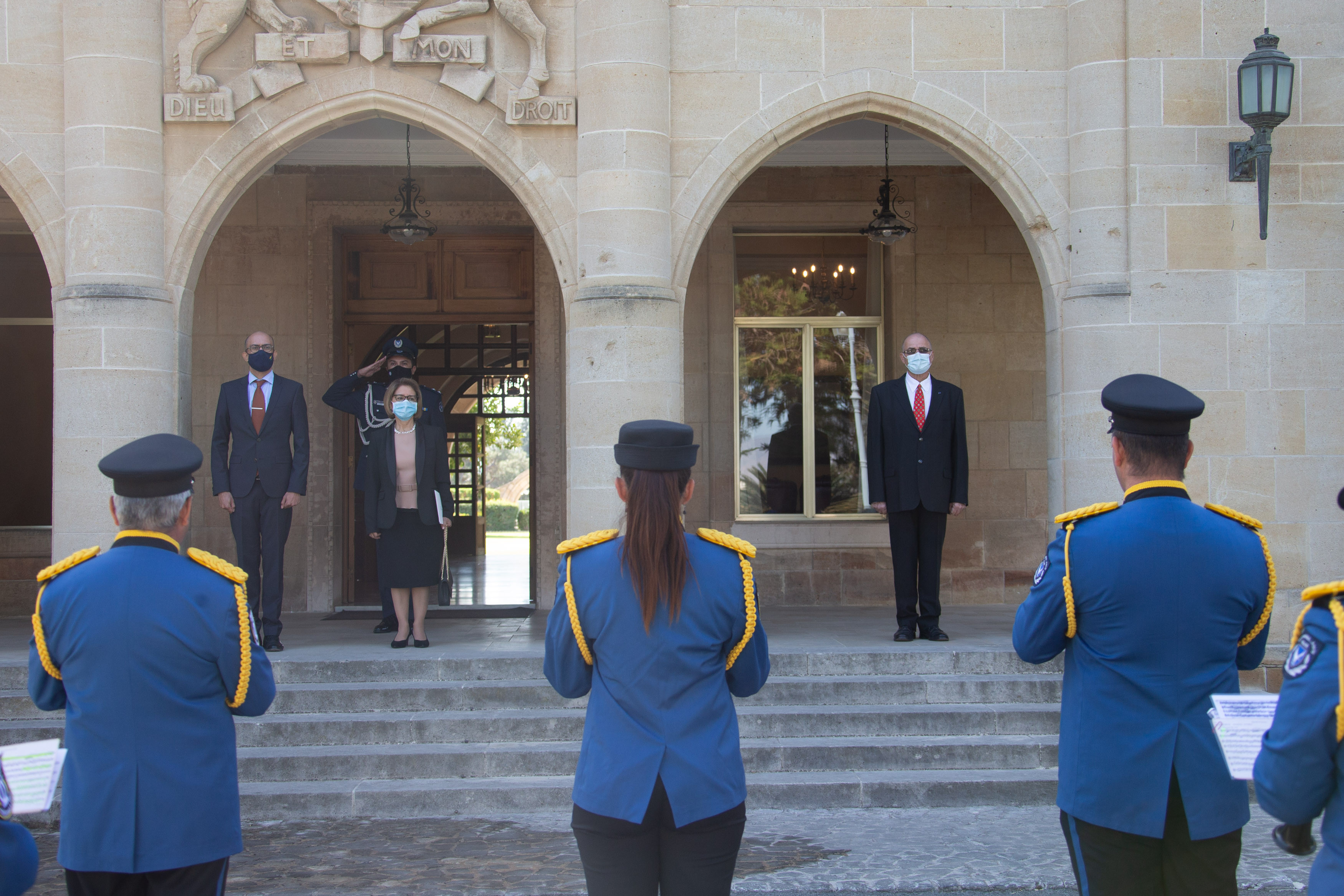 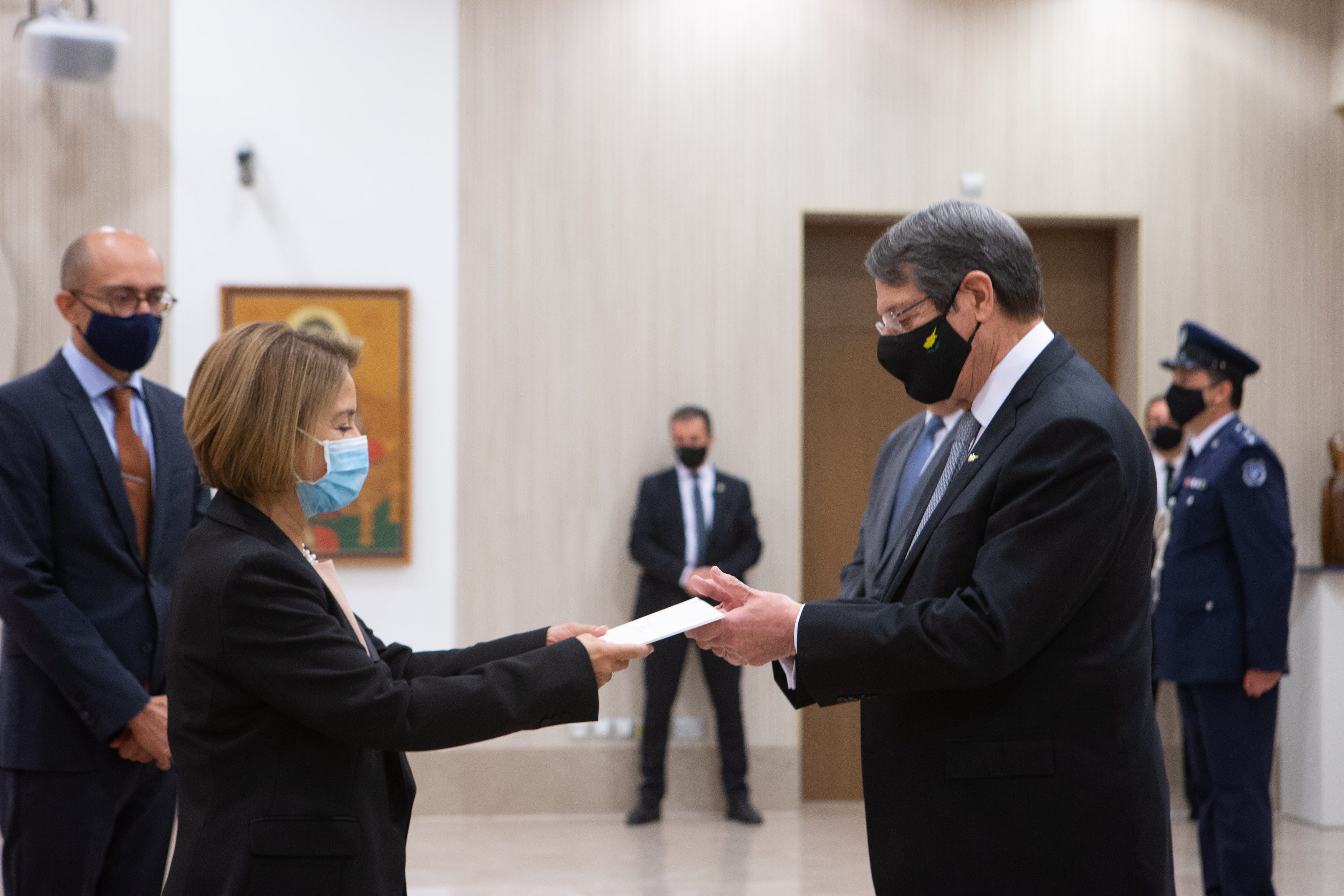 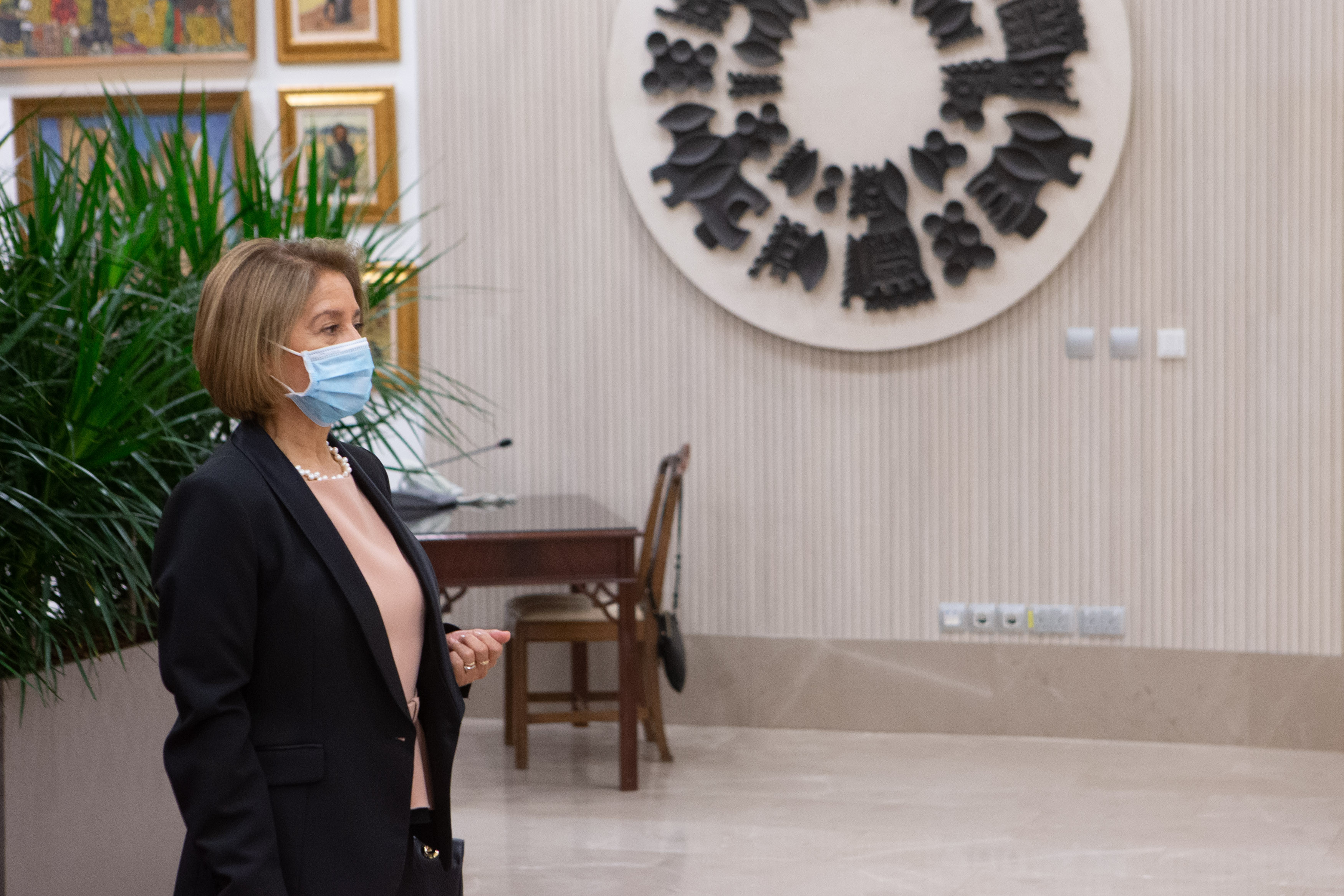 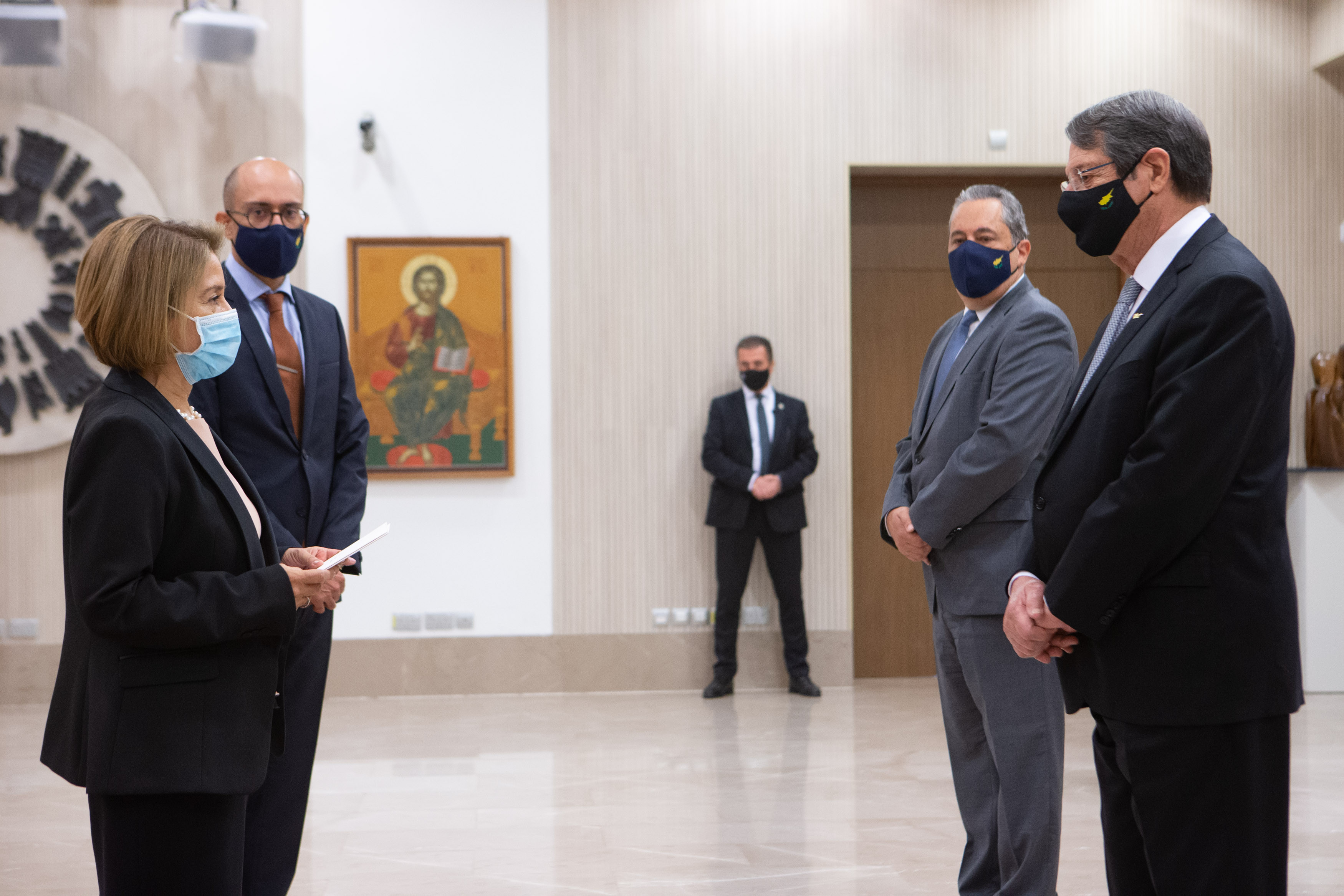 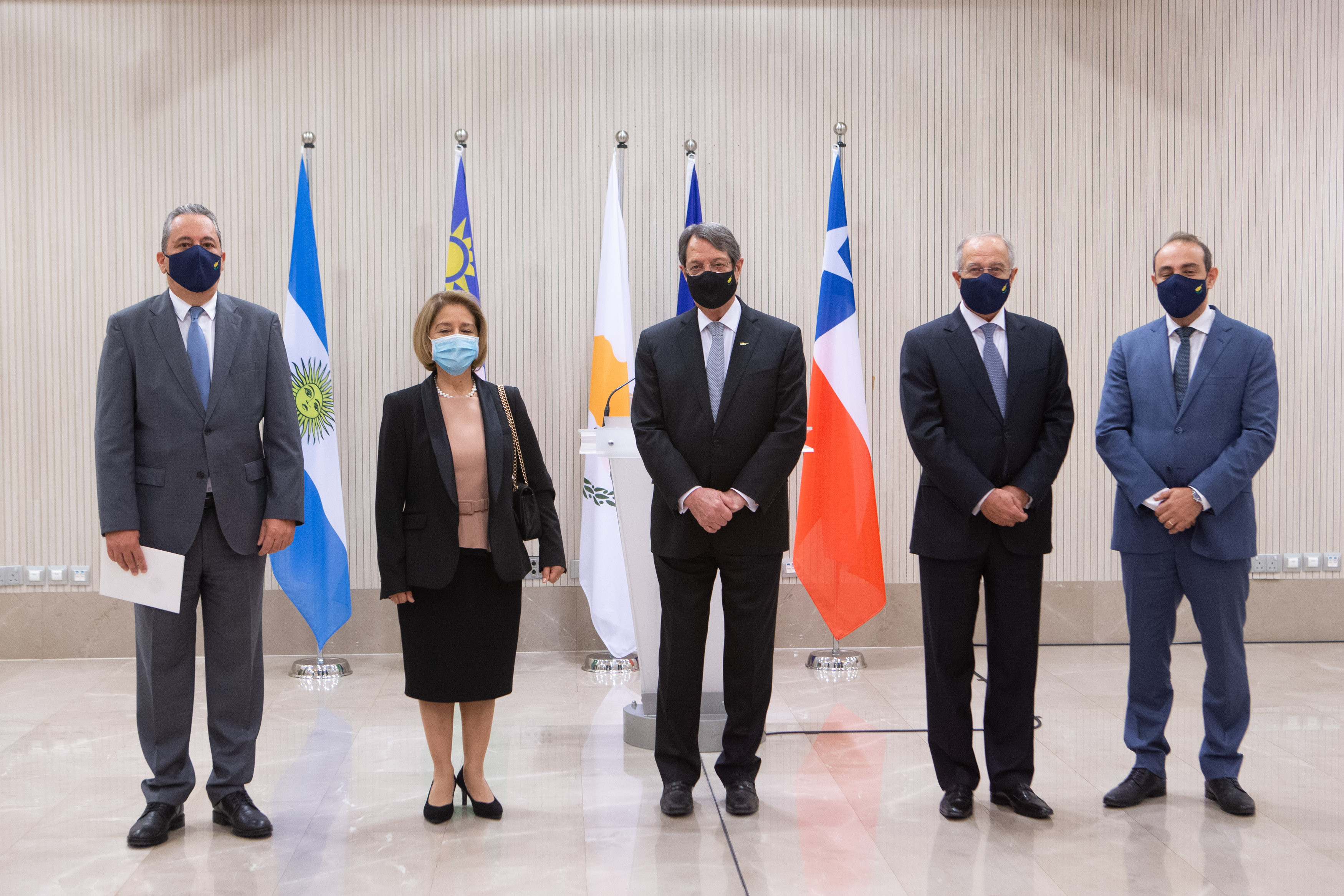 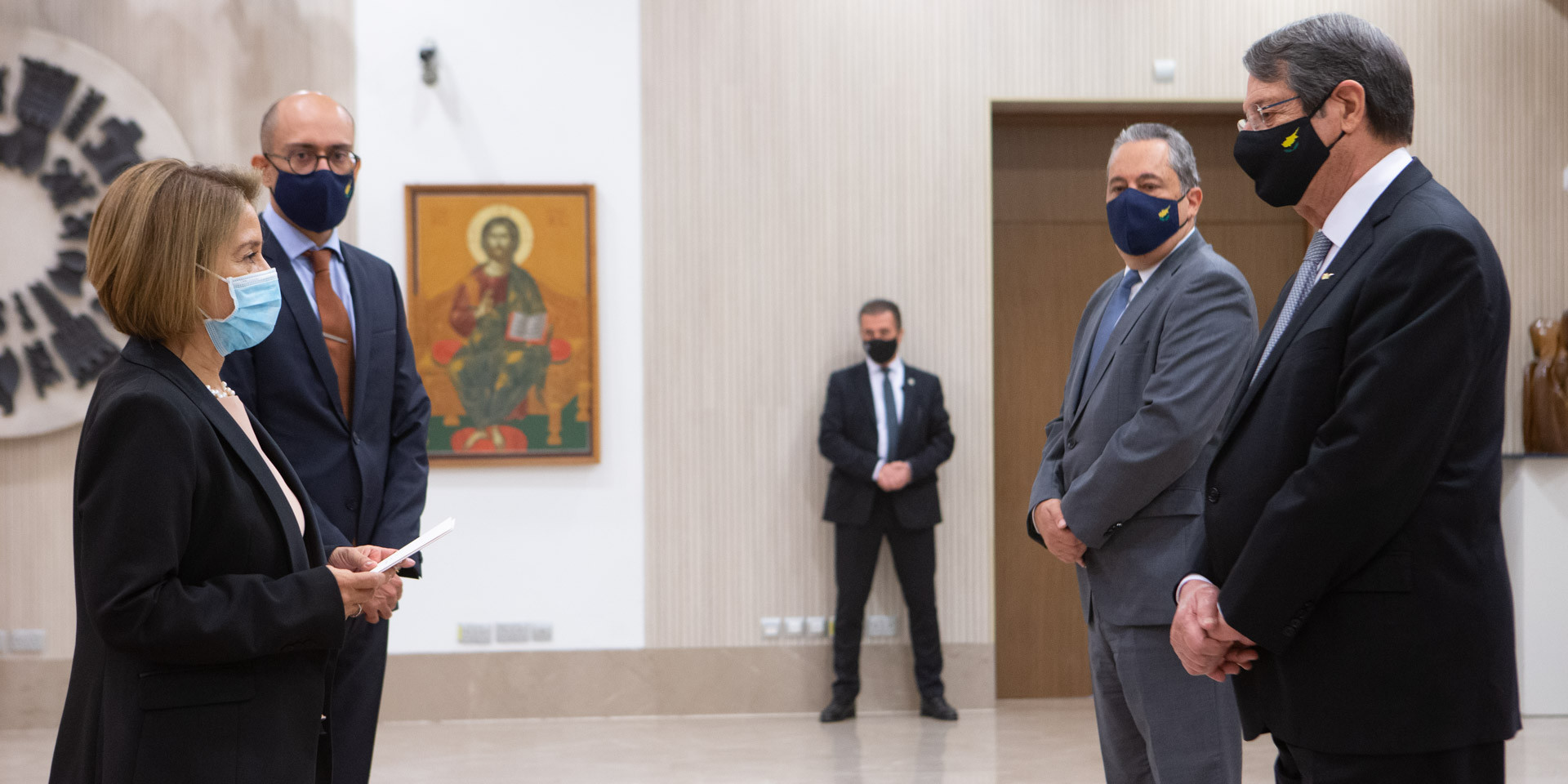 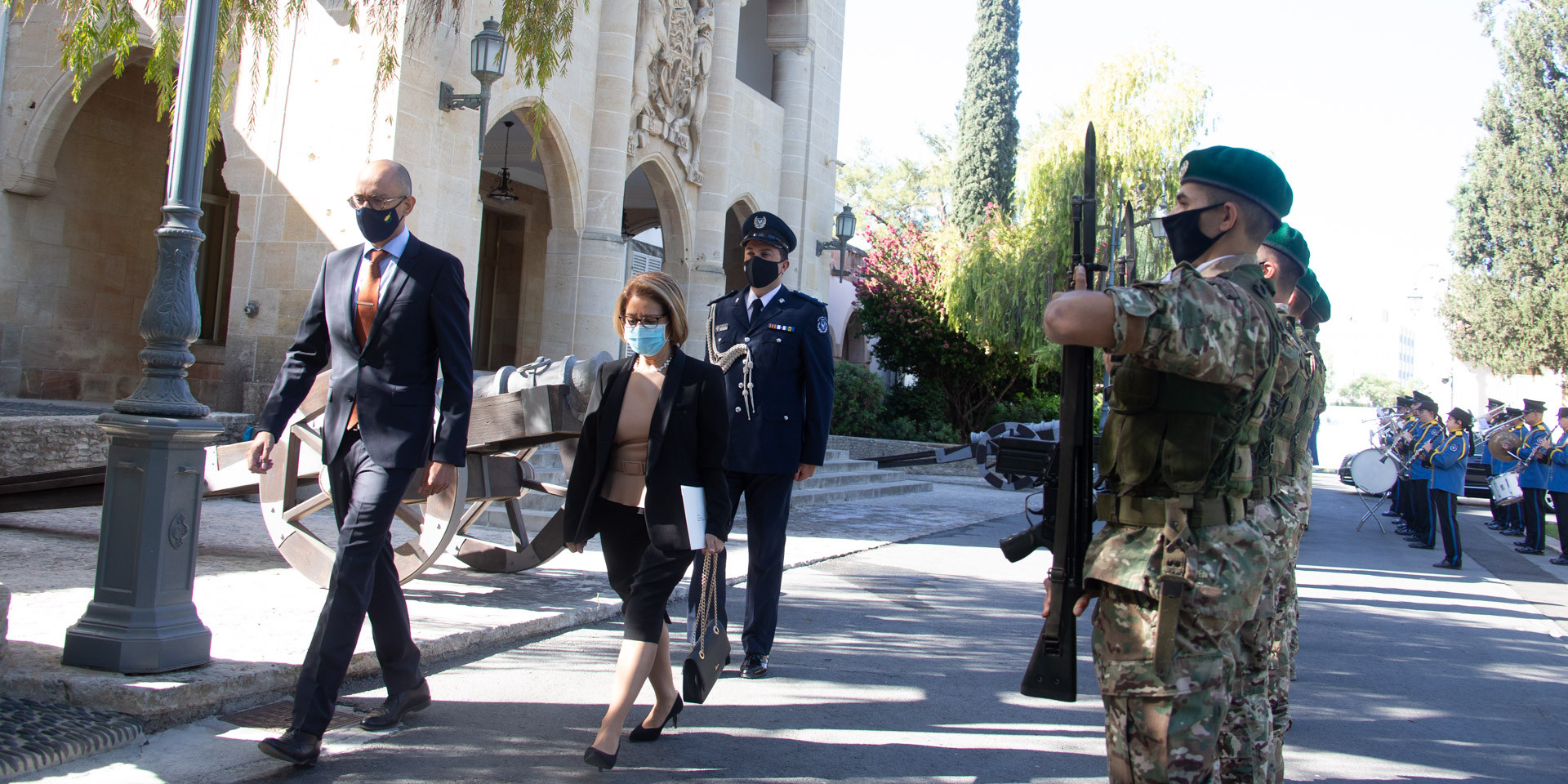 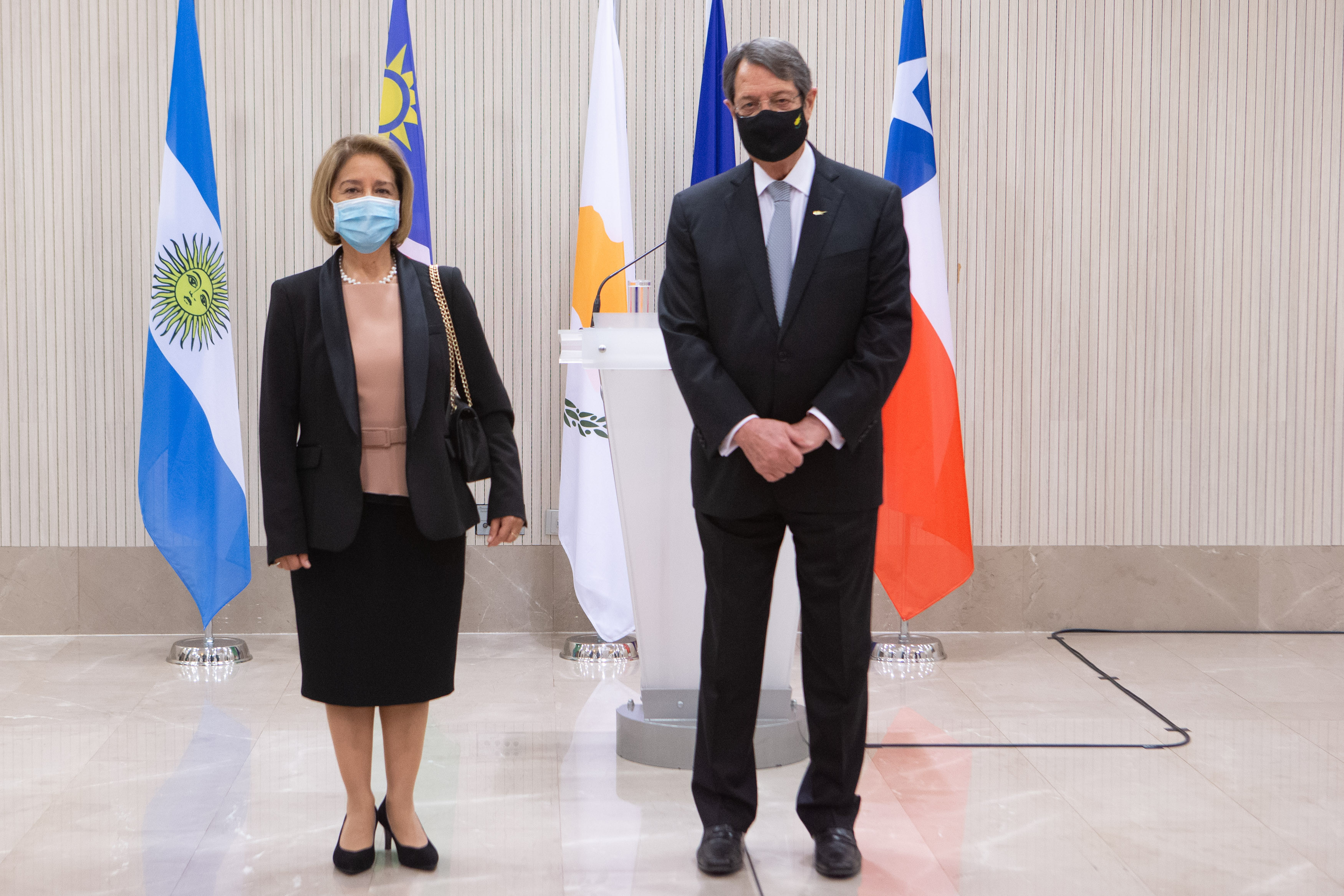 The President of the Republic, Mr Nicos Anastasiades, received the credentials of the Ambassador of the Republic of Chile, Ms Ximena Carolina Ares Mora, during a formal ceremony held at the Presidential Palace on Thursday, October 29, 2020.

Chile has been committed to Cyprus over the years through diplomatic efforts to help alleviate the consequences of its territorial division and to support a comprehensive and peaceful solution on the basis of relevant UN Security Council Resolutions.

Chile, as a member of the United Nations, strongly committed with Peacekeeping processes, has actively participated in the United Nations Peacekeeping Force in Cyprus (UNFICYP) since 2003. Even though due to the COVID-19 pandemic, which caused in Chile, as in most of the world, a big impact in economy, my country was forced to suspend for a few months our contingent's participation in the Peacekeeping force. In September, my country resolved to resume this important task as of February 2021, assigning for that purpose six military observers, who will join the Argentine Task Force.

With this decision, Chile reinforces its firm conviction that Peace Operations under the auspices of the United Nations are an integral part of our responsibility and collective commitment to multilateralism, key to respond the challenges for international peace and security, based on cooperation and partnership.

May I underline that, over the years, Chile has played an active role in favour of Peace and Security, promoting and reinforcing multilateral institutions, while supporting democratic and human rights principles, as well as equity at the international level. In accordance with this long-standing policy, on behalf of the President of Chile, I want to reiterate my country’s sincerest desire that an understanding between Cypriots and its counterparties could be reached, for a fair settlement of the Cypriot Question, underlining that Chile has permanently supported the negotiation process in order to find a solution to this matter.

In this context, our common views have created a fruitful ground for multilateral mutual assistance and cooperation and mutual support for candidature in several international organizations. Within the framework of this collaboration, Mr. President, I wish to express the appreciation of the Chilean government for the support of Cyprus for the candidacy of Ambassador María Teresa Infante, who was recently elected as a member of the International Court of the Sea, for the period 2020-2029.

Her election is in accordance with one of Chile’s foreign policy pillar, which is the strict respect for international law, the inviolability of treaties and a peaceful resolution of controversies, non-interference in the internal affairs of other States and the search for peace and international security.

This policy has been especially significant in the field of maritime delimitation and the extension of continental shelves, where Cyprus and Chile, share the same values towards the unconditional respect and application of the International Law of the Sea.

In the internal aspect, may I underline that promotion of democracy, reinforcement of civil rights, equality, overcoming poverty, transparency and economic stability are some of the words that describe the evolution of my country in the last decade. In this regard I would like to mention the deep commitment of the Chilean Government in subjects such as women’s rights and high quality education for all, which has been reflected, for example, within the scope of the Comprehensive and Progressive Treaty of Trans-Pacific Partnership (CPTPP or TPP11), Chile has signed an Arrangement on Trade and Gender, which aims to promote the economic empowerment of women and their participation in trade and investments.

In the economic area, globalization has been a central feature in Chile’s strategy. Consequently, integration efforts have been intensified in the last 30 years as Chile weaves an increasing network of 26 bilateral and multilateral Free Trade Agreements with 64 countries all over the world.

At the same time, my country actively participates in the main economic forums, such as World Trade Organization, the Asia Pacific Economic Cooperation Forum, the Organization for Economic Co-operation and Development.

Our foreign policy follows the principle of open regionalism, which considers trade agreements as mechanisms for the expansion of commerce and investment, all within the context of increasingly liberalized world trade. In that context, Chile promotes free trade at every level, through the elimination of tariff and non-tariff measures. Thus the establishment of the Pacific Alliance open up new possibilities for trade and investment between Asia and Latin America.

Concerning Europe, this zone has always constituted a relevant area for our foreign policy. In 2002 my government signed an Association Agreement, which laid out the foundations for a closer relationship between the European Union and Chile. Hence, the joining of Cyprus to the European Union in 2004 established the bridge for a broader collaboration between our two countries.

In this regard Chile believes that the excellent results already achieved can be further improved for mutual benefit, through the upgrading of this agreement with the aim of boosting thepolitical dialogue, the cooperation, and the economic and trade relations with the European Union, with a more diversified agenda, focused on science, technology, research and innovation for the development of our international competitiveness, with the participation of Small and Medium Size Companies, universities and scientific agencies. In this context, we believe that agricultural development, renewable energies, collaboration in new technologies under start-up programs, geology – especially the one related to copper, which is Chile’s most important export product – as well as academic cooperation, are areas in which there is an important potential for fruitful cooperation, that I look forward to work closely with your Government.

In the environmental field, Chile is committed to the process being carried out by the Convention on Biological Diversity in order to establish a Post- 2020 Biodiversity Framework, and that can have a high level of ambition. The foregoing, with the aim of promoting concrete actions by the States to develop solutions in harmony with nature in order to ensure the conservation of biodiversity at a global level.

Your Excellency, I am confident that considering the international background of Cyprus and Chile, we are in condition to face many challenges and also grasp relevant opportunities in the bilateral aspect that will help us to further develop new areas of cooperation, cultural exchange and business between our two countries. “

It is with distinct pleasure and sincere feelings of friendship that I receive today your Letters of Credence appointing you as the new Ambassador of the Republic of Chile to the Republic of Cyprus. I would like to assure you that my Government and the people of Cyprus will provide you with every assistance in the performance of your high duties. I personally look forward to working with you on further developing the bilateral relations between our two countries.

Cyprus and Chile enjoy excellent relations, at bilateral and multilateral levels, based on bonds of friendship and mutual understanding. Seizing this opportunity, I wish to express our willingness to explore much needed opportunities for private business cooperation between our two countries on all levels. Cyprus, as a member state of the European Union, stands ready to work closely with Chile in promoting common values and principles via the regional cooperation between the EU and countries of Latin America. In this regard, Cyprus strongly supports the EU-LAC relationship which we actively seek to enhance for the benefit of the people of the two regions.

Allow me to underline that the Chilean participation in the UNFICYP, with 14 servicemen since 2000, is greatly appreciated by the Government and the people of the Republic of Cyprus. To this end, I would also like to express our sincere gratitude for Chile’s continued commitment and contribution to the United Nations Peace Keeping Force in Cyprus and of course the support and cooperation on various international fora.

Our priority remains none other than addressing the unacceptable current state of affairs with the continuing Turkish occupation of 37% of the territory of the Republic of Cyprus, since there is no doubt that lasting peace and stability can only be achieved through the comprehensive settlement of the Cyprus problem.

Cyprus highly values Chile’s principled stance on the Cyprus Issue and your country’s consistent support to our efforts to reach a lasting solution which would safeguard the sovereignty, independence and territorial integrity of the Republic of Cyprus, without any third country dependencies, military troops and guarantees.

Regrettably, Turkey’s illegal drilling operations within our Exclusive Economic Zone run contrary to the necessity of having a good and positive climate that will enable the resumption of the negotiating process under the auspices of the United Nations. These Turkish actions have been strongly condemned by the international community and the EU, since they infringe upon the sovereign rights of the Republic of Cyprus and do not comply with International Law, particularly so the United Nations Convention on the Law of the Sea, and the principles of good neighbourly relations. Apart from escalating tensions in our turbulent region, the illegal and provocative actions by Turkey not only adversely affect our efforts to resume the peace process but they leave no room for bringing about the necessary conditions for all parties to engage in a results-oriented dialogue.  We do hope that Turkey will finally chose to adopt a more pragmatic and constructive approach and abide by International Law.

Moreover, we are gravely concerned by Turkey’s decision for the opening of the fenced city of Varosha, in yet another flagrant violation of UN decision. The UN Secretary General has already expressed apprehension over this decision which is his own words might as well “heighten tensions and undermine chances for a resumption of peace talks”. On our side, we call upon Turkey to fully abide by pertinent UN Security Council Resolutions, which call for the return and resettlement of Varosha by its rightful and lawful inhabitants, and abandon any plans that are in clear violation of the 1979 High-Level Agreement between the Leaders of the two communities, as well as UN Security Council Resolutions 414 (1970), 442 (1980), 550 (1984) and 789 (1992).

Following the UN Secretary-General’s new initiative, I wish to reiterate once again that I remain strongly committed to resuming the negotiating process. But for the talks to resume with realistic prospects for success, it is imperative to create an environment which will be conducive for constructive and good faith negotiations. And certainly not under conditions of intimidation or threats by Turkey.

I sincerely wish you every success in your important duties, aimed at achieving greater mutual understanding and providing new impetus to the development of the relations between our two countries.

In welcoming you to Cyprus, I would kindly request that you convey to His Excellency, Mr. Sebastián Piñera, as well as to the amicable people of Chile our warmest greetings and a message of friendship and solidarity. I conclude by extending my heartfelt wishes and by assuring you once more of the support of my Government and me personally to your valuable mission, so that your tenure will be highly constructive and fruitful, and carried out in such a way that the sound relationship that Cyprus enjoys with Chile will further flourish.