Recent News
Consumer Price Index (CPI): July 2021
Industrial Turnover Index: May 2021
Announcement by the Cyprus Post regarding fraud through email
Applications for the management of Flasou Postal Agency
Full vaccination is key to protecting against serious COVID-19, EMA and ECDC say
Guidelines by the Minister of Transport regarding means of Public Transport
Rapid antigen testing units – 5 August 2021
Registered Unemployed: July 2021
Revised guidelines for the discharge of positive cases without symptoms or with mild symptoms
Applications for the management of Alethriko Postal Agency 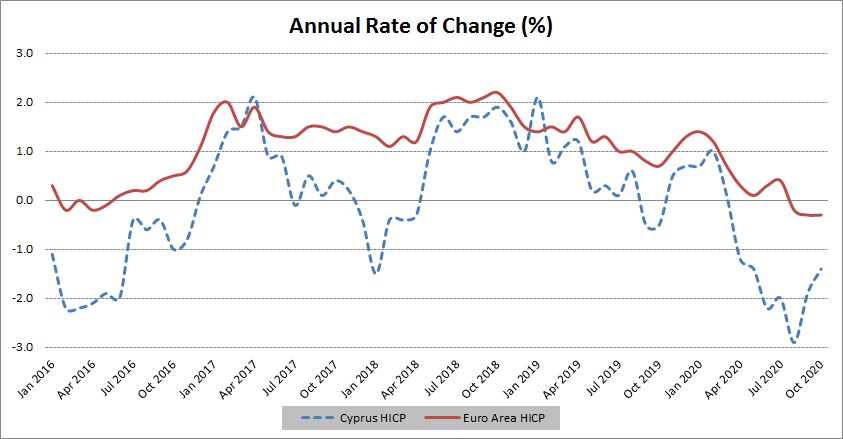 Compared to October 2019, the categories Housing, Water, Electricity, Gas and Other Fuels and Transport had the largest changes with percentages of -7,4% and -5% respectively. (Table 1)

Compared to September 2020, the largest changes were recorded in Clothing and Footwear (5,1%) and Housing, Water, Electricity, Gas and Other Fuels and Transport(3,4%). (Table 1)

For the period January - October 2020, compared to the corresponding period of the previous year, the largest changes were noted in Transport (-4,9%) andHousing, Water, Electricity, Gas and Other Fuels (-3,4%). (Table 1)

As regards the economic origin, the largest change when compared both to the index of October 2019 and to the index of the previous month was observed in Energy with percentages of -13,4% and 3,1% respectively. (Table 2)

The implementation of precautionary measures and relevant decrees to address the negative consequences of COVID-19 disease had a direct impact on the price collection process of certain goods/services for the month of October 2020. As the problems anticipated were common to all member states of the European Union they were tackled by applying the same methodologies under the supervision and guidance of the European Statistical Office (Eurostat).

Turnover Index of Retail Trade Except of Motor Vehicles: May 2021