Recent News
Photo Album - Foreign Affairs Minister – Discussion organized by Foreign Ministry and CUT
Photo Album - PoR – Greece's Alternate Foreign Minister for European Affairs
Photo Album - PoR – Secretary General of the Cooperation Council for the Arab States of the Gulf
Statement to the Press by the Minister of Foreign Affairs of the Republic of Cyprus, Mr. Nikos Christodoulides, following deliberations with the Secretary General of the Gulf Cooperation Council, Dr. Nayef Falah M. Al-Hajraf
Rapid antigen testing units – 28 October 2021
Imports, Sales and Stocks of Petroleum Products: September2021
Launch of the new Web Portal of the Statistical Service on 1st November, 2021
Industrial Production Index: August 2021
Extension of measures against the spread of COVID-19 — A booster dose available for individuals vaccinated with J&J
Opening hours of the Newsroom on the 28th of October

Statement by the Permanent Representative of Cyprus, Mr Andreas Hadjichrysanthou, on the Report of the Security Council for 2020 at the UN General Assembly, in New York

At the outset, I wish to thank the President of the Security Council for the month of June, Ambassador Jürgenson for presenting the Report of the Council, as well as its more timely submission that allows us to discuss it 2 months earlier than we did last year. We would like to see this trend continue so that our future discussion of this report can take place the soonest possible following the reporting period it covers.

We are cognizant of the amount of time and labour that goes into preparing this report, constraining its early issuance. This is why we suggest to accompany its presentation before the General Assembly with an update on the Council’s work, covering the period that has lapsed, under the responsibility of the Council’s President.

The format of the report remains unchanged, notwithstanding the discussions within the Council to adapt it to the expectations of the broader membership. We continue to believe that the report of the Council should provide a more strategic overview of the fulfillment of its mandate to maintain international peace and security, as well as more insight related to trends and indicators of conflict.

Above all, however, the report should adopt a more cooperative approach towards the General Assembly. While the membership has entrusted the Council with its Charter mandated role, the work of the Council concerns all of us. There should be no questions of hierarchy or antagonism, but there needs to be transparency and synergy to achieve the UN’s overarching purpose. And there needs to be more accountability regarding the compliance of all of us with the decisions of the Council. Implementation cannot be absent from the Council’s report.

In addition to improving the synergy between the Council and the General Assembly, the Council must improve how it relates to the Member States directly concerned by the items on its agenda and Member States hosting peacekeeping operations of the UN.

As one of the conflicts that has been on the Council’s agenda the longest, the Cyprus Question remains unresolved because the numerous resolutions adopted by the Council, not only remain unimplemented, but an effort is underway to try and void them. The campaign to deconstruct the acquis that has formed through the plethora of UNSCRs on Cyprus is aided and compounded by a corresponding campaign on the ground to create enough faits accomplis to render these resolutions non-implementable. These are developments that the Council should prevent, both by enforcing its own resolutions and by holding those in breach accountable. The most immediate action required by the Council on the Cyprus conflict in particular, is the implementation of its decisions on Varosha without any further delay.

At the core of the UN’s existence is the mitigation of power that ensures a level playing field for all Member States irrespective of their size, economy and military capabilities. The Council must incarnate the concept of equality amongst the Member States in order to succeed at fair and sustainable peacemaking that responds to the endeavours of affected populations and not to the interests of outside powers. To begin with, of course, the Council needs more robust action to uphold the prohibition of the threat or use of force.

Before closing, I wish to single out some of the practices that merit heightened attention by the Council, including the transfer of terrorist fighters from one conflict to another, long-term displacement, demographic engineering in conflict situations, and impunity for atrocity crimes. The cycle of violence and non-accountability could be broken through referring, by default, all situations before the Council, to the International Criminal Court.

Statement to the Press by the Minister of Foreign Affairs of the Republic of Cyprus, Mr. Nikos Christodoulides, following deliberations with the Secretary General of the Gulf Cooperation Council, Dr. Nayef Falah M. Al-Hajraf

Statement by the Republic of Cyprus to the UN Security Council Annual Open Debate on Women, Peace and Security: Investing in Women in Peacekeeping and Peacebuilding 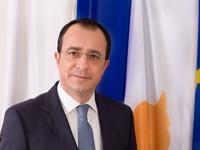