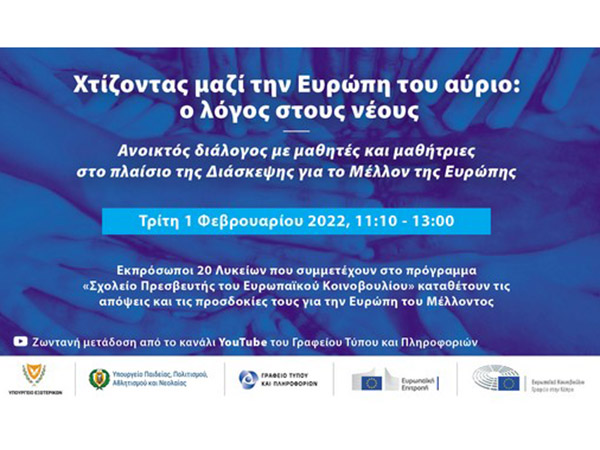 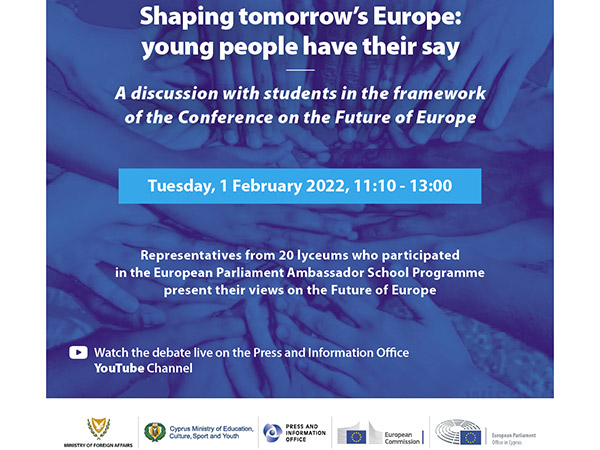 “Shaping tomorrow’s Europe: Young people have their say” – Open dialogue with students in the framework of the Conference on the Future of Europe

In the framework of the ongoing dialogue on the Conference on the Future of Europe, the Ministry of Education, Culture, Sports and Youth and the General Secretariat for European Affairs of the Ministry of Foreign Affairs are organizing an open debate with lyceum students, in cooperation with the European Commission Representation in Cyprus, the European Parliament Office in Cyprus and the Press and Information Office.

The Embassies of the Netherlands, France and Germany also participate in the event.

The event will take place on the 1st of February 2022, between 11:10 am – 1 :00 pm, at Archbishop Makarios III Dasoupolis Lyceum, with the physical presence of the participants, and will be broadcast live via the Press and Information Office channel on Youtube: https://youtu.be/tn-qDKd67fw

Based on the goals of the Conference, the aim of the event is to provide a forum for students to express their ideas, expectations and vision, thus contributing in shaping the Europe of the future.

During the event, 40 students – representatives from 20 lyceums from all over Cyprus who participate in the European Parliament Ambassador School Programme, will have the opportunity to present their views and develop their positions through dialogue, before the Minister of Education, Culture, Sports and Youth, Mr Prodromos Prodromou, the Acting Secretary-General for European Affairs of the Ministry of Foreign Affairs, Ms Philippa Karsera, the Head of the Representation of the European Commission to Cyprus, Ms Myrto Zambarta, the Head of the European Parliament Office in Cyprus, Mr Andreas Kettis and the Ambassador of the Netherlands, Ms Elke Paula Merks, the Ambassador of France, Ms Salina Grenet Catalano and the Ambassador of Germany, Ms Anke Schlimm. The debate will be coordinated by the journalist, Ms Vivian Kanari.

The discussion and presentation of ideas will focus on three themes: 1. Values and rights, Rule of Law, Security, European Democracy, 2. Migration, 3. The role of the EU in the world.

Preparatory teleconference meetings of the groups of students of the 20 lyceums will precede on 31 January 2022, for discussion with the Ambassadors of the Netherlands, France and Germany in order to draw conclusions and ideas. The outcome of the dialogue will be posted on the Conference platform.

The event will be held with the physical presence of the participants, in compliance with all the existing health protocols of the Ministry of Health.

Statement by the Minister of Foreign Affairs, Mr Ioannis Kasoulides, after his meeting with his Czech counterpart

Photo Album - Illumination of the Municipality of Lefkosia