According to the results of the Survey on Income and Living Conditions 2021, with income reference period the year 2020, 17,3% of the population or 154.000 persons were at risk of poverty or social exclusion (AROPE indicator, the main indicator to monitor the EU 2030 target on poverty and social exclusion). Namely, 17,3% of the population was living in households whose disposable income was below the at-risk-of-poverty threshold or was severely materially and socially deprived or was living in households with very low work intensity. This indicator exhibited a minor improvement in comparison with the previous year when it stood at 17,6%, continuing its downward trend of the recent years. This improvement is reflected exclusively in the percentage of men (15,8%), as the percentage of women remained almost at the same level (18.7%) as the previous year. Throughout the years, women are maintaining their unfavorable position in respect to men. Chart 1 shows the evolution of this indicator in the years 2015 to 2021. 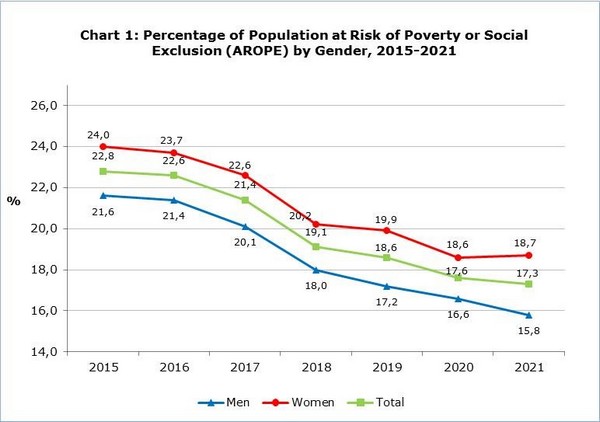 The percentage of the population that was severely materially and socially deprived, meaning that they were experiencing enforced lack of at least 7 out of 13 deprivation items (7 related to the household and 6 to the individual), has decreased to 2,6% in 2021 in comparison to 3,2% in 2020. At the household level, the deprivation refers to the financial inability of household to face unexpected expenses, to pay rent or utility bills or loans, to keep home adequately warm, etc., while at the individual level to the financial inability of the individual to spend a small amount of money each week on him/herself, to have regular leisure activities, to get together with friends/family for a drink/meal at least once a month, etc. (more information in the definitions in the methodological part).

The percentage of the population aged 0-64 years, that was living in households with very low work intensity, meaning that the adults in the household worked less than 20% of their work potential during the past year, showed a minor increase in 2021, reaching 5,6% in comparison to 5,3% in 2020.

In Chart 2 that follows, each of the three indicators contributing to the computation of the strategic indicator at-risk-of-poverty or social exclusion is presented separately. 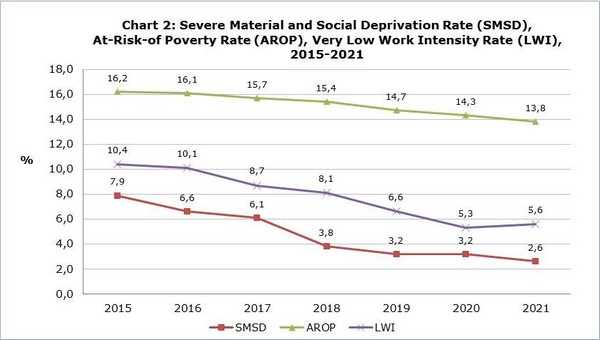 The survey on Income and Living Conditions of the Households (EU-SILC) is conducted in accordance to Regulation (EC) No. 2019/1700 of the European Parliament and of the Council and is used by the European Statistical Service (EUROSTAT) as the main source of comparable information among the member states of the European Union (EU) on matters related to poverty and social exclusion.

The main objective of the survey is the study of various socio-economic indicators, which affect the living conditions of the population, the compilation of systematic statistics in relation to the income inequalities, the inequalities in living conditions of the households, poverty and social exclusion, as well as the compilation of structural social cohesion indicators.

The survey conducted in 2021, with income reference period the year 2020, covered a sample of 4.113 households in all districts of Cyprus, in both urban and rural areas.

The data collection was carried out with personal and telephone interviews at the households using electronic questionnaires.

2)  a week holiday away from home,

3)  to pay rent or utility bills or loans (to be confronted with payment arrears),

4)  a meal with meat, chicken, fish or vegetarian equivalent every second day,

1)  to have an internet connection,

2)  to replace worn-out clothes by some new ones,

3)  to have two pairs of properly fitting shoes (including a pair of all-weather shoes),

4)  to spend a small amount of money each week on him/herself,

5)  to have regular leisure activities,

6)  to get together with friends/family for a drink/meal at least once a month.

The six items at individual level are only collected for people aged 16 or over. For the children below 16 it is estimated by applying the rule: if at least half the number of adults in the household lack an item, then the children living in that household are considered deprived from that item as well.

Very low work intensity (LWI): The percentage of the population aged 0-64 that was living in households whose adults aged 18-64 worked less than 20% of their work potential during the past year. From the adults are excluded the students aged 18-24, people who are retired according to their self-defined current economic status or who receive any pension (except survivor’s pension), people in the age bracket 60-64 who are inactive and living in a household where the main income is pensions (except survivor’s pension).