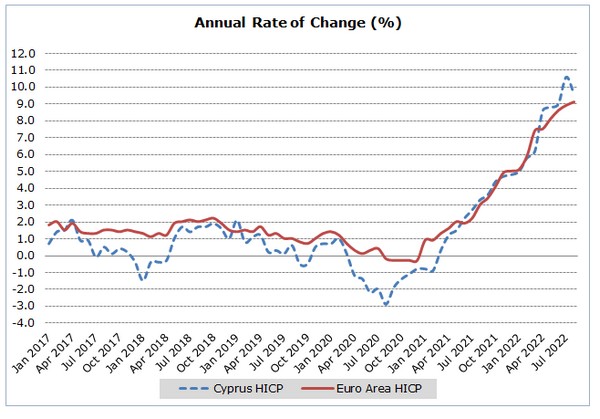 Compared to July 2022, the largest change was recorded in category Recreation and Culture (2,6%). (Table 1)

For the period January – August 2022, compared to the corresponding period of the previous year, the largest changes were noted in Housing, Water, Electricity, Gas and Other Fuels (21,6%) and Transport (16,0%). (Table 1)

As regards the economic origin, the largest change when compared both to the index of August 2021 and to the index of the previous month, was observed in Energy with percentages of 40,6% and -5,0% respectively. (Table 2)

Note: The weights of the categories are calculated with infinite decimal figures and rounded up to two decimals when published. Figures do not add up to the total due to rounding

The price collection is carried out only in urban Districts of Lefkosia, Larnaka, Lemesos and Pafos. For each city, the fluctuations in the product prices each month are weighted according to their population. Specifically, the weights for the four districts are: Lefkosia 42%, Lemsos 30%, Larnaka 18% and Pafos 10%.