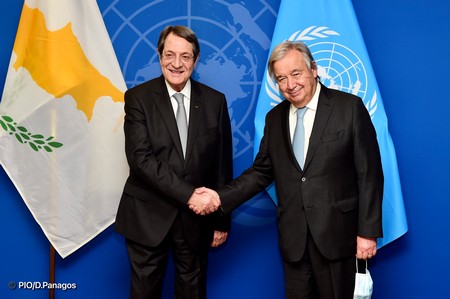 The President of the Republic met with the Secretary-General of the United Nations, in New York

The President of the Republic, Mr Nicos Anastasiades, had a meeting today, at 7.15 p.m. (Cyprus time) with UN Secretary-General, Mr Antonio Guterres, at the Secretary-General’s office at the United Nations Secretariat, in New York.

After the meeting, President Anastasiades said, speaking to the press at UN headquarters, that "during the brief meeting with the Secretary-General, specific reference was made to what had been agreed last year, i.e. the appointment of either a special representative or a personal envoy.

What the Secretary-General has made understood and was rather clear, is that despite the objections on the part of Turkey, nonetheless, in order to keep the prospect of a dialogue alive, he has given instructions for Deputy Secretary-General Rosemary di Carlo to visit Cyprus in autumn for a fact-finding mission. But it was clear that Turkey firmly opposes any initiative”.

As I have pointed out in my speech, unfortunately, what is being said about respect for international law is nothing but the interpretation that Mr Erdogan himself or the Turks attach to international law. And I have made specific indicative references, because it is not the only violation of the UN Charter and international law, but also the threats against Greece. What is ironic, as I mentioned in my speech, is to speak of a friendly way of finding solutions to problems with neighbouring countries. At the same time, however, Mr. Erdogan threatens that one night we will appear before the Greeks, we will come, threatening to occupy Greek islands, in violation of the Greek airspace, not to mention violations of international law — and I have made extensive reference —the Cyprus problem, the invasion of Syria, always with ‘good neighbouring’ relations in mind by Mr Erdogan, the violation of Iraq’s sovereignty, the intervention in Libya, Nagorno-Karabakh.

It is known that, while the Republic of Cyprus maintains excellent relations with all neighbouring countries, Turkey is trying to find vindication simply to change the image of isolation in relation to neighbouring states”.

Also present at the meeting, which lasted about 15 minutes, were the Minister of Foreign Affairs, Mr Ioannis Kasoulides, the Government Spokesman, Mr Marios Pelekanos, the Greek Cypriot Negotiator, Mr Menelaos Menelaou, the Permanent Representative of the Republic to the United Nations, Ambassador Andreas Hadjichrysanthou, and the Director of the Office of the President of the Republic, Mr Pantelis Pantelides.

Prior to the meeting with the Secretary-General, President Anastasiades addressed the 77th General Assembly of the United Nations. Following the meeting, he hosted a luncheon to the Permanent Representatives of the five Permanent Members of the Security Council. 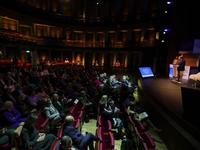 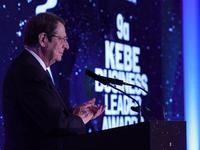 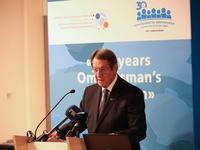 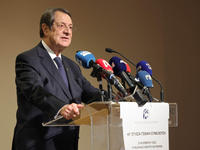 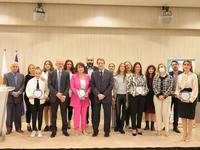